Set up a highly available Elasticsearch cluster on Kubernetes, spanned over multiple zones

If one of the zones go down, the cluster is still available

Elasticsearch is a is a popular open source search and analytics engine that is distributed in nature. The shard and replica management features of Elasticsearch make it robust and scalable. If you deploy Elasticsearch on Kubernetes instead of traditional virtual or physical machines, it is super easy to install, configure, and manage.

When it comes to enterprise-level deployment, you need to have a highly available Elasticsearch cluster spanned over multiple zones so if one of the zones go down, the cluster is still available. In this tutorial, you learn how to set up such a cluster.

In almost all types of cloud environments, you can have a Kubernetes cluster in a region that spans over multiple zones, which are typically data centers in close proximity. You want to have the application available even when few nodes in a zone – or an entire zone – becomes unavailable.

A typical production-level Elasticsearch cluster on Kubernetes consists of master pods, data pods, and ingest pods. The visualization component is A Kibana pod. Master pods control the Elasticsearch cluster including creating or deleting indexes, tracking members of the cluster, and allocating shards to different data pods. Elasticsearch requires a stable master node for its operation. Data pods hold the data and perform CRUD operations, search, and aggregations. Ingest nodes help with transformation and enrichment of data before it is stored in the index as documents. The data pod and master pod require persistent storage, so they are deployed in Kubernetes as StatefulSets. The Kibana and ingest pods do not require persistent storage and are deployed as Kubernetes deployment controllers.

An important requirement for Elasticsearch is to have local, solid-state drives (SSDs) for storage for best performance. In this tutorial you use local SSDs for Elasticsearch, and your example solution both achieves high availability and tolerates a single zone failure.

Before you walk through this tutorial, make sure you have the following environment:

This tutorial takes about 30 minutes to complete.

The following illustration shows the architecture of this solution. There are three zones, and you want to have at least one master pod available in each zone. Similarly, the data pods a minimum of one per zone. When you need to add more data pods, add a multiple of three (with one going to each zone). 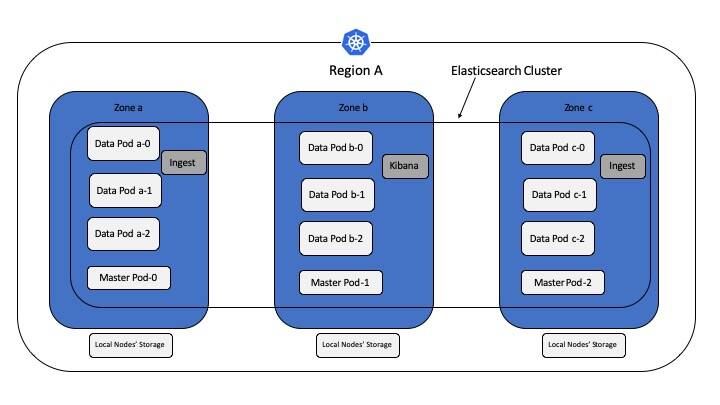 Elasticsearch has the ability to take your physical hardware configuration into account when allocating shards. If Elasticsearch knows which pods are in the same zone, it can distribute the primary shard and its replica shards to pods across zones. This distribution minimizes the risk of losing all shard copies in the event of a zone failure. You use this feature to identify respective zones for each of the data pods. Set up this way, the shards are allocated so that all the shards in a zone. Theirprimary or replica shards are available in the other two zones, a configuration that allows you to sustain one zone failure.

Examine the code available in Github. There is one StatefulSet to deploy three master pods. Then there are three other StatefulSets to deploy data pods. The difference between these three StatefulSets is in node affinity, which you deploy to nodes labeled by zone using nodeAffinity spec. Also, the zone attribute is defined in the container’s node.attr.zone environment variable with values set to a or b or c in each data pod StatefulSet.

As you can see from the shard allocation that you walked through in the previous steps, shard 0 is in zones a and b, shard 1 is in zones a and c, and shard 2 is in zones b and c. If zone a goes down, shard 0 (primary) and shard 1 (primary) are unavailable, but their replica shards are available in zones b and c respectively. Similarly, if any other zones go down, either the primary or replica shard of that zone is available in the other two zones. You saw this behavior in the previous zone c.