Infrastructure and platform groups within organizations generally charge consumers of their services based on lines of business (LoBs) or at a more granular, application level. Existing chargeback models are built on virtual machine (VM) usage pools where VMs are allocated to LoBs on demand, and usage is based on resource consumption over a period of time. With the density and multi-tenancy offered through cloud-native technologies like Red Hat OpenShift, depending on a VM-based chargeback alone is insufficient. This tutorial covers several design points around how to deal with chargeback in an organization that adopts OpenShift as its enterprise Platform as a Service (PaaS) strategy, with a primary focus on OpenShift on the IBM Z and IBM LinuxONE platforms.

It should take you about an hour to create the simple “Hello World” application described here, but doing this production involves communication with the LoBs, licensing, procurement teams, and so forth, which can take weeks or months.

In situations where guaranteed service-level agreements are required (such as production), it makes sense to devote entire nodes to LoBs. This can result in under-utilization/less density and LoBs paying for resources they might not entirely consume. As with any decision in the IT world, this is an engineering trade-off. OpenShift provides a mechanism to limit LoBs to VMs, and the details are covered in the Limiting LoBs to VMs section below.

The second situation is where LoBs do not need SLAs but just need a location to run/test workloads at the lowest possible cost. This is where pod/namespace/project-specific chargeback can be performed. This is covered in the Entity resource consumption section below.

Ideally, an infrastructure provider group within an organization can provide both of the options above and let LoBs decide which mechanism makes sense — for example, Node-based for prof and perf testing, or namespace/project/pod (granular)-based for dev/test/qa/sandbox environments. This solution is detailed in the Hybrid chargeback model section.

Typically organizations will charge for:

This can be a combination of constant baseline plus amortized and utilization costs. Depending on the hardware consumed, chargeback for an on-premise cloud can be significantly cheaper than that of a public cloud, and even within on-premise infrastructure choices options like IBM LinuxONE can be much cheaper than Intel/AMD-based options.

OpenShift entities include pods, deployments, namespaces, and persistent volume claims. Chargeback on these entities is the easiest mechanism as it is built into OpenShift as part of the metering component.

As LoBs have namespaces (or clusters, depending on the multi-tenancy model) for specific use cases, let’s look at chargeback that use namespaces using the inbuilt metering capabilities.

The oc -n openshift-metering get reportqueries command returns a list of what can be queried, including cluster-wide reporting, node-wide, namespace-wide, and the more granular pod and PVC consumption. Focusing on just namespaces here:

You can start metering with a Report custom resource. For scheduled reports, it should look something like this:

Red Hat has the following rules:

More information about reports can be found here.

OpenShift deploys workloads into worker nodes, where each node is a VM. By default, the Kubernetes (k8s) scheduler will deploy workload pods across worker nodes based on resource utilization heuristics built into k8s. These heuristics provide optimal scheduling in general, but to align with existing organizational policies you need a way to limit pods to specific nodes.

k8s has namespaces that provide resource isolation and a mechanism for bookkeeping. It is important to note that the isolation provided is logical — a common misconception is that namespaces offer security isolation, but they do not as pods across namespaces can be deployed on the same VM and could be vulnerable to things like container escape vulnerabilities. Namespaces as-is don’t offer isolation between LoBs that align with existing VM-based chargeback metrics.

This is our sample cluster deployed on IBM Cloud.

Note: To learn how to deploy and manage OpenShift Container Platform on IBM Cloud, please visit this page. 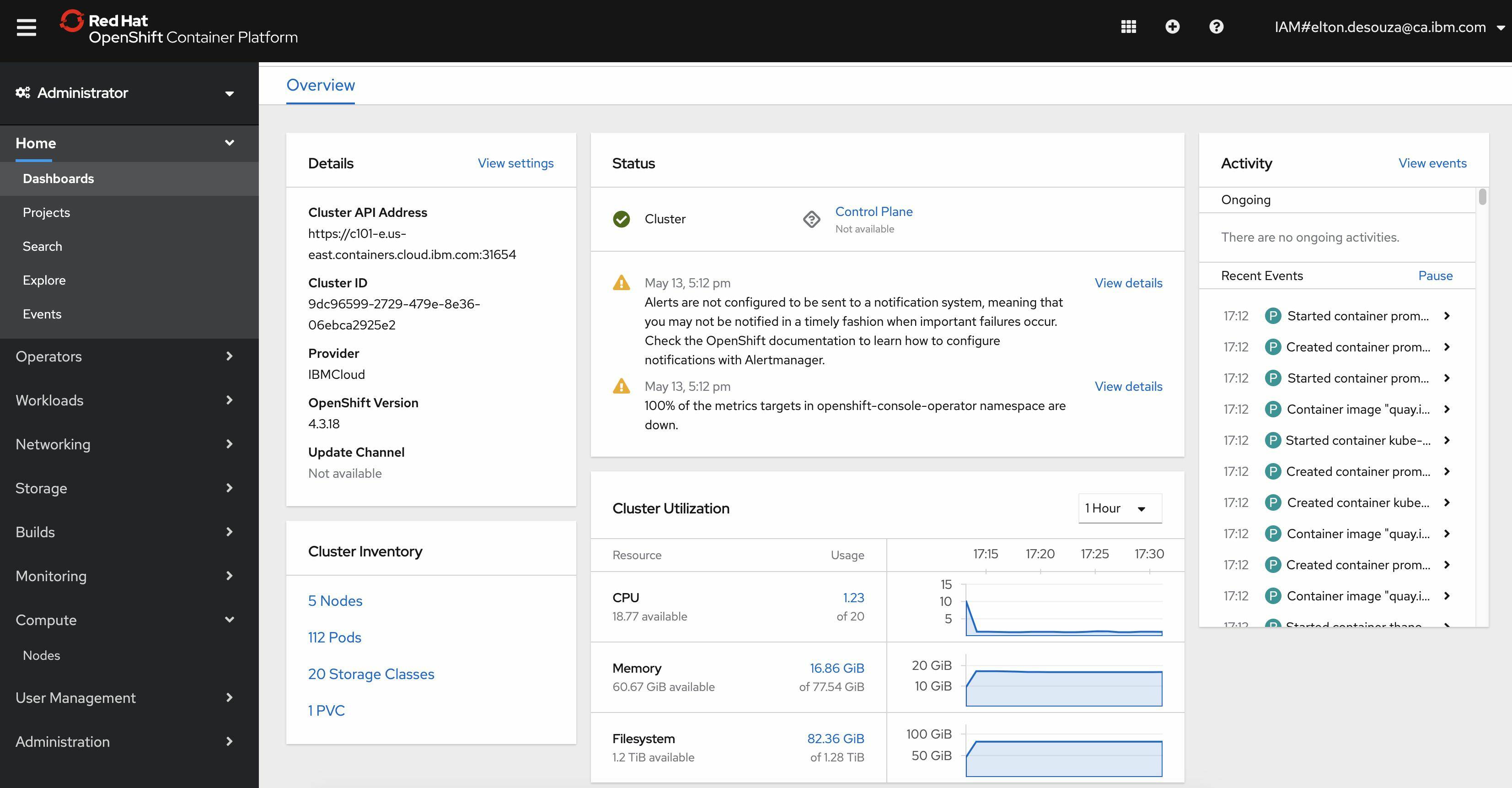 To map LoBs to VMs, you will need to use:

Labels allow users to map their organizational structures in loosely coupled fashion without requiring clients to store these mappings (learn more here). For this scenario, you will apply labels to worker nodes. Naming convention and org structure decomposition are beyond the scope of this tutorial, but I plan to write another tutorial that helps you define node labels, namespace naming best practices, and topologies for multi-tenancy.

For now, you have five nodes defined: worker[0-5]. You can use the names as is, or assign more meaningful names to use later for node selection for LoBs or to help make physical locations more visible. For example, you might want to define what LPAR, zVM instance, or CPC a VM was deployed to. You can apply node labels from the GUI: 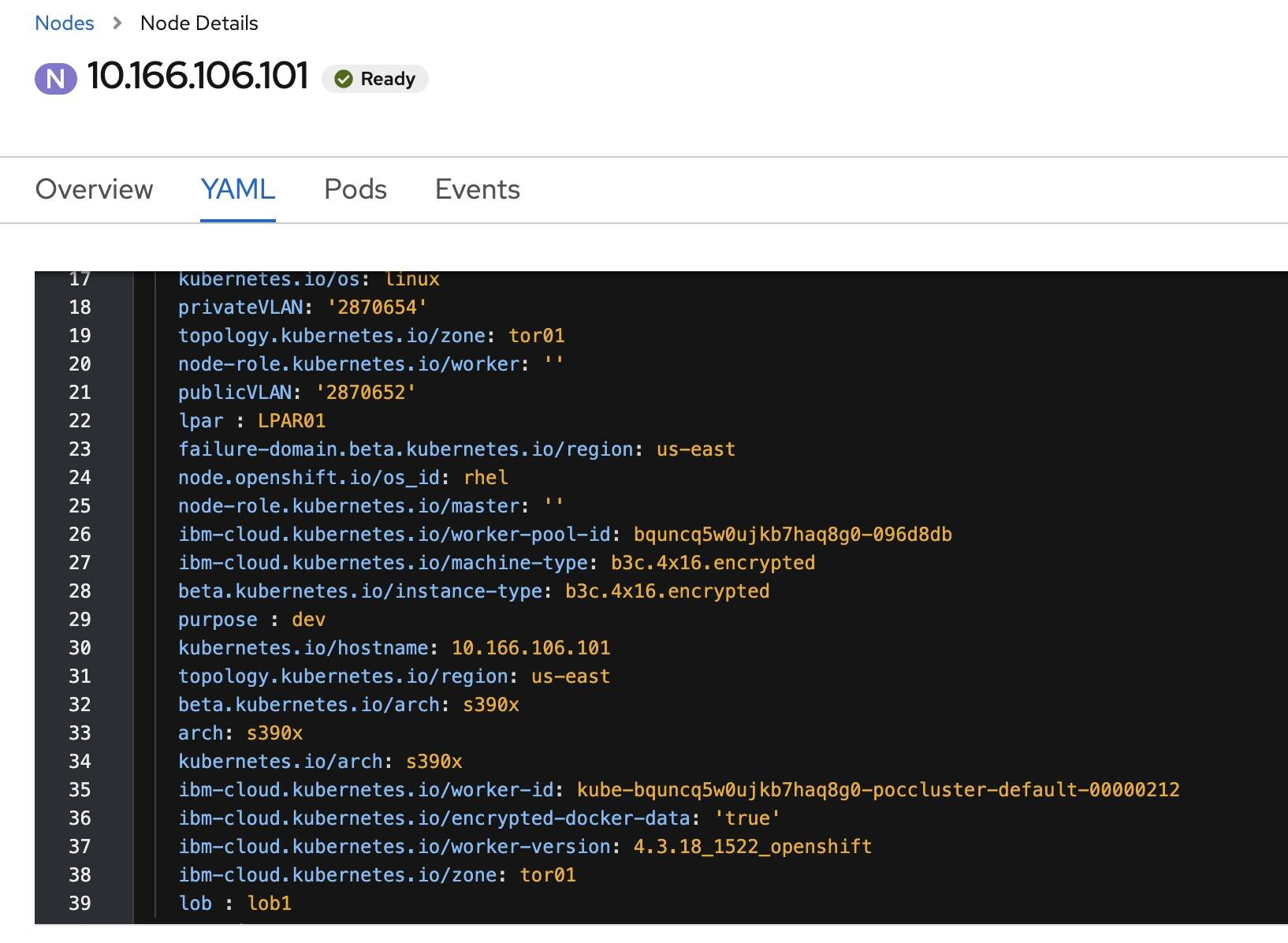 Note: Labels must have singular values for each key, so pick only one of each option when applying it to a node.

We will use the following mapping for LoB ⟶ Projects ⟶ Nodes

Next, let’s create the four projects in the diagram above:

Each LoB can own multiple apps and each app will typically have a project. It’s also possible to have an LoB as a project and apps as deployments within that LoB, but this offers less granular control. Having each app as a project makes it easier to map resources to individual apps, which can be consolidated for an LoB.

You can also use namespaces to do this, but projects are just k8s namespaces with additional annotations that allow for easier multi-tenancy as follows:

Note: Creating projects from the command-line interface allows you to pass in a node selector using the --node-selector argument. If you do this using the GUI, you need to modify the namespace (not the project, since that’s immutable) to apply a node selector.

Command line: oc new-project lob1-app1 --node-selector='lpar=LPAR01,purpose=dev,lob=lob1' and repeat for all of the projects from your mapping diagram above. Ultimately, you will need four projects for lob[0-1]-app[0-1].

GUI: Projects are immutable, so you need to change the namespace assigned to it (which is mutable):

Next, create groups (or map from LDAP following these instructions):

Note: This tutorial assumes that you understand basics of RBAC. If not, please read the official k8s documentation on RBAC.

For this simple tutorial, we use the very permissive \*. In production, you’ll need to use the principle of least privilege and build up from there. This also needs to be repeated for lob2 and lob3 by changing the metadata.namespace field.

You can also create a Role vs. a ClusterRole and limit to the lob1/lob2/lob3 namespace, but using a ClusterRole allows you to define the permissions only once and then reference it from multiple RoleBindings for individual namespaces.

Next, set up a RoleBinding which maps roles to objects and users/groups:

You could also use serviceaccounts for things like automated DevOps pipelines:

Repeat the RoleBinding for the other three namespaces.

Note: This tutorial focuses on user roles and not service accounts.

Users from each LoB now have the ability to deploy pods only to the projects that their LoB has access to. 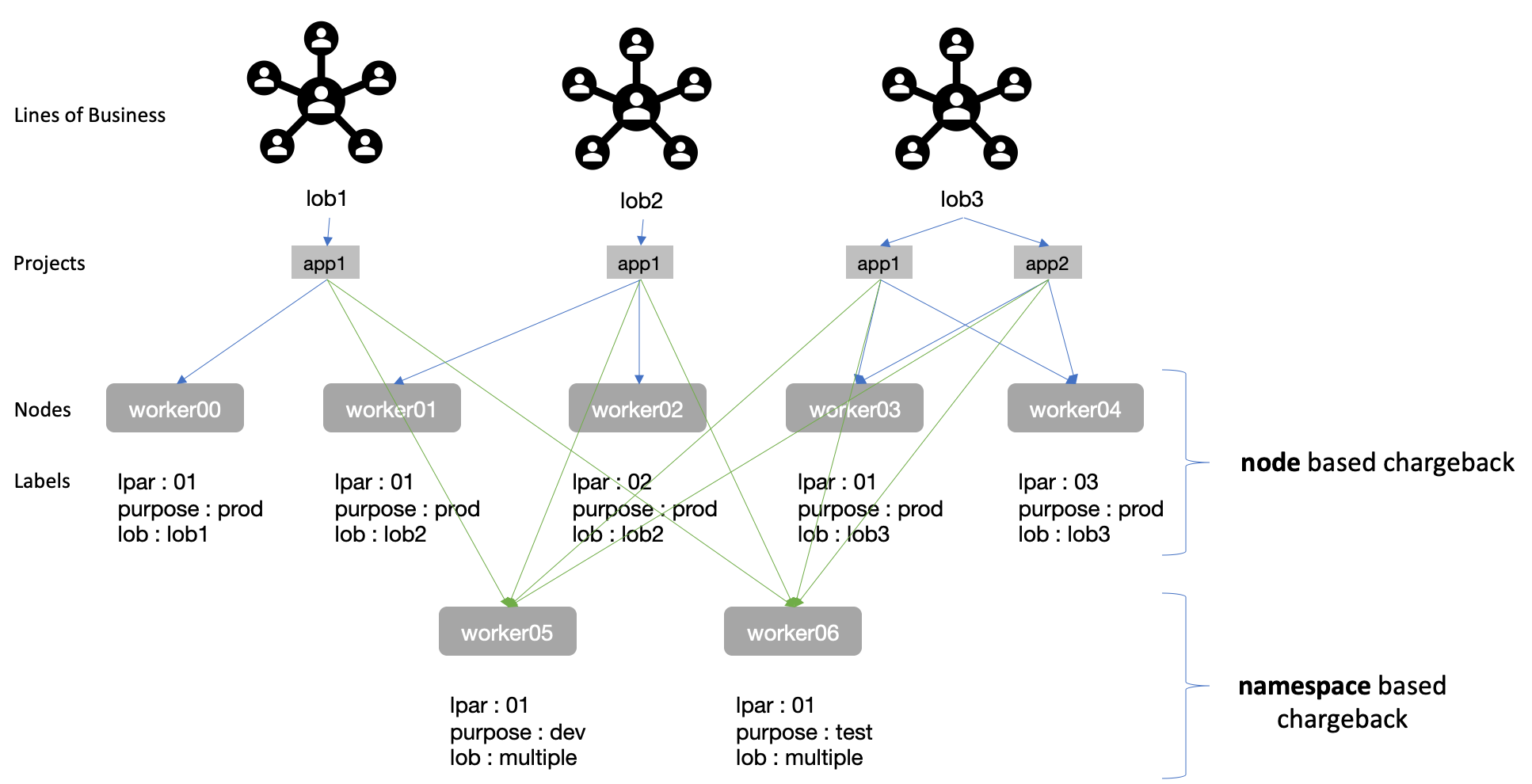 RBAC has no default way to list which namespaces a user has access to, but you can write a simple script to do this:

Simple testing can be done using the --as parameter to the oc CLI (see the docs here).

Admission controllers are a bit like using a sledgehammer, and the methods mentioned earlier in this post are far easier to mantain and far less operationally invasive. However, I’m still mentioning it here for completeness.

This tutorial has explored various mechanisms for consuming OpenShift metering data for internal chargeback. In future tutorials, I will cover a mechanism to correlate with z/VM and KVM monitoring tools and other cloud-based tooling (such as Red Hat OpenShift Cost Management) to provide platform as well as infrastructure chargeback.

To experiment with chargeback and other concepts on Red Hat OpenShift on the LinuxONE platform, head over to our LinuxONE Community Cloud. I recommend deploying a three-tier app with Liberty, MQ, and DB2 — all available via Cloud Paks — to understand how to optimize the chargeback mechanism based on workload.