Install Node-RED on your IBM i system and create Node.js programs with a browser-based flow editor

In a digital world, companies need to be agile to react faster to their customer expectations. Software solution designers and developers live with these same imperatives and need to deliver applications quickly. But how can they make sure they implement the right solutions and avoid wasting time and money on implementing inappropriate solutions?

The prototype (and fast prototyping) is an early model or experiment to rapidly try solutions. Many prototypes fail. But because they fail, and sometimes fail fast, prototypes can be lifesavers, preventing the waste of resources. As a result, unforeseen difficulties are identified earlier, and the costs associated with wrong design or late design changes are avoided.

This rapid iterative cycle of reflection and construction is what allows product designers and developers to learn quickly through experience and customer feedback.

Companies using IBM i have the same imperatives. They can use rapid prototyping to be able to address their customer expectations.

Initially developed for wiring the Internet of Things (IoT), Node-RED is one of new web-based tools and platforms that have emerged for rapid development and prototyping.

In this article, we will see what is Node-RED and how we can install it on IBM i to provide a fast-prototyping solution.

Node-RED (https://nodered.org/) is a flow-based programming tool, originally developed by the IBM Emerging Technology Services team (in early 2013) and now a part of JS Foundation.

Traditional development can be very technical, but Node-RED enables you to concentrate on the logic of your workflow and allows fast prototyping.

Node-RED consists of a Node.js-based runtime with a flow editor accessed through a web browser. Within the browser, you create your application by dragging nodes from a customizable palette into a workspace and start to wire them together. With a single click, the application is deployed back to its runtime. 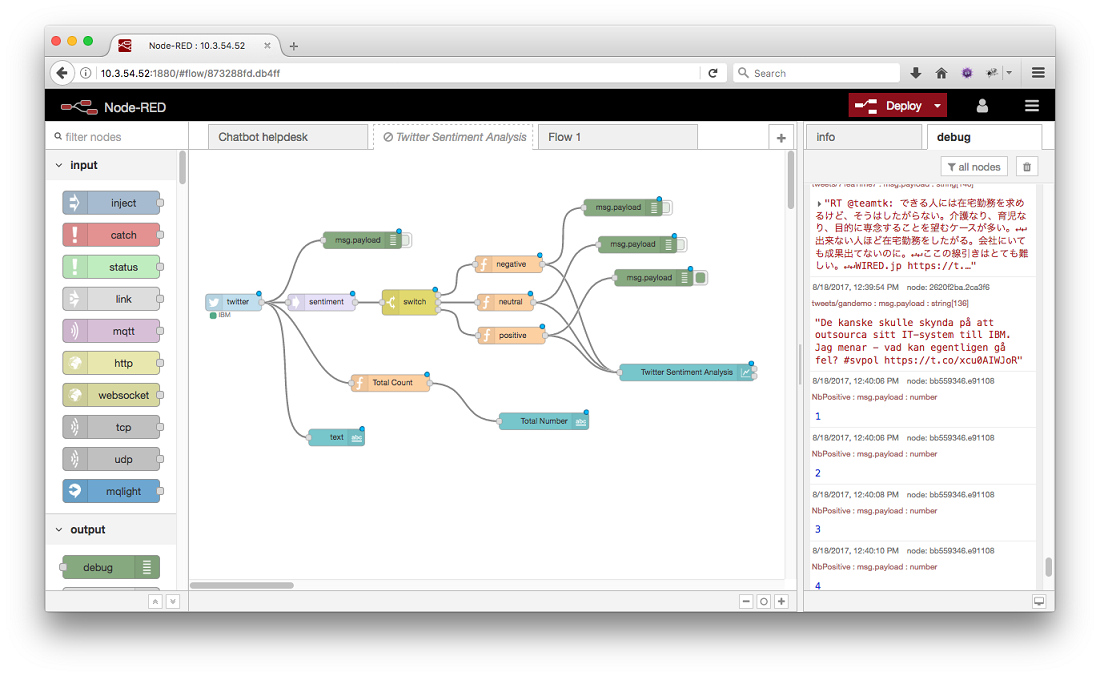 Nodes can be IoT devices, web APIs, cloud services or any building block that can receive and send messages. Nodes encapsulate complex building blocks such as databases, APIs, protocol handlers, logic, and so on.

The palette of nodes can be easily extended by installing new nodes created by the community and the flows you create can be easily shared as JSON files.

While most programming in Node-RED is done visually using predefined functions (nodes), additional functionalities can be added in JavaScript.

Node-RED is a full Node.js application, and Node.js is supported by the IBM i platform. Therefore, Node-RED can be deployed on IBM i. The IBM i Open Source Solutions licensed program offering (LPO) 5733OPS was created to support open source technologies on IBM i. It is included within the bonus pack for the IBM i operating system. After being installed, this no-charge LPO is serviced through PTF group SF99225.

To install Node-RED on your IBM i system, you’ll need:

If you need to install Node.js, you can refer to the Native JavaScript applications on IBM i with Node.js article from Xu Meng and Zheng Chang Qing.

Open a shell session on your IBM i system. You can use QSHELL (QSH) or PASE (CALL QP2TERM), or start the Secure Shell (SSH) server (using the STRTCPSVR *SSHD command) and remotely connect to IBM i. I recommend using SSH. Read Jesse Gorzinski‘s article, Eight Reasons to Embrace SSH at IBMSystemsMag.com to be convinced. Remote SSH solution is used in this article.

The recommended Node.js version for Node-RED is 6.x, supported by IBM i. But, as IBM i supports several Node.js versions at the same time (installed and running), we need to configure our environment to use Node.js v6.

As Node-RED is a Node.js application (based on Node.js modules), it can be installed globally in the system directory or locally in a specific directory. In this article, we will perform a global installation.

In npm, you can install packages using any one of the following methods:

You can read more about npm and types of installation at: https://docs.npmjs.com/getting-started/what-is-npm

If you decide to install Node-RED locally, it will be installed in your current directory. The npm root command enables you to know where Node-RED will be installed. Installing it as a non-global module doesn’t add the node-red command to your system path. Only node-red-pi command is added to <YOUR_DIRECTORY_PATH>/node_modules/node-red/bin/.

So, to start it, you need to use a Bash script provided by Node-RED: <YOUR_DIRECTORY_PATH>/node_modules/node-red/bin/node-red-pi.

During Node-RED installation, optional dependencies require a compiler in order to build them. If GCC is not installed, errors may be reported by the node-gyp command (which is a Node.js native add-on build tool used by npm to install Node-RED). These are typically non-fatal errors that cannot stop the installation of Node-RED. Node-RED can work without these optional dependencies, but later, you may find additional node modules that require the ability to compile native code.

That’s why we will install GCC.

GCC is a popular C language compiler used for compiling open source projects. To get it, use scripts provided by 5733OPS, option 3 – chroot with gcc. These scripts allow to download packages from the perzl.org AIX open source website. Refer to the IBM i Chroot for more information.

When you install GCC for the first time, you have to run a script that enable you to install RPM Package Manager (RPM) packages from perzl.org (see IBM i Chroot).

Using GCC as-is with libraries provided, you could compile majority of Node.js modules. But sometimes, for specific Node.js modules, you will have to provide and add specific C/C++ libraries to the GCC environment.

To do that, you can use standard wget (supported by 5733OPS, OPT 7 – Tools) and rpm commands to install your new library from http://www.oss4aix.org/download/RPMS/.

You can also add the required library to the file containing the list of libraries to be installed during GCC installation and run or re-run installation scripts. That’s the way we will use hereunder to install a new library required by optional bcrypt module installed by Node-RED.

During installation, Node-RED installs an optional Node.js package, bcrypt. This package is optional but required for Node-RED user authentication (configured later in this article). bcrypt needs to be compiled, but due to missing C/C++ package, compilation cannot succeed.

If you want to install bcrypt, you must add the missing C/C++ package to the list of packages to be installed during GCC installation. The file containing the list is /QOpenSys/QIBM/ProdData/OPS/GCC/pkg_perzl_gcc-4.8.3.lst.

You can edit this file using the following IBM i command:

Or, from a Shell session:

Then, add the following line to the end of file, and save and exit editor.

We can now install GCC.

We will do a simple GCC installation (refer to the chroot scripts page to see all types of installation available, such as installation in chroot location, and options). To install GCC, run following commands:

After installing GCC, we can install Node-RED.

The easiest way to install Node-RED is to use the Node.js package manager, npm.

As mentioned before, in this case, we perform a global Node-RED installation.

Installing it as a global module adds the node-red command to your /QOpenSys/QIBM/ProdData/OPS/Node6/bin system directory.

Node-RED and dependencies packages will be downloaded and installed into the system path, /QOpenSys/QIBM/ProdData/OPS/Node6/lib/node_modules.

You can check installation (and the version installed) using the following npm command:

If you look at the Node.js v6 directory, you can see that Node-RED commands were added:

By default, the Node-RED command access permissions allow everybody to launch Node-RED (‘777’). If needed, you can change it using the chmod command.

We are now ready to run Node-RED.

Node-RED can be configured to take in account your environment requirements, in terms of network, security, and so on.

Its configuration is based on the properties defined in the settings.js file.

Location of this file is determined in the following order:

Node-RED also provides a default settings.js file that will be used in the absence of a user-provided settings file. It can also be used as a starting point for creating your own settings file.

All configuration properties are explained in the Node-RED documentation.

Let’s see how to configure the Node-RED UI port number and user authentication.

By default, access to the Node-RED editor web interface is not authenticated and everyone can connect. We restrict access to authenticated users by performing the following steps:

Node-RED basic configuration is done. We can now start Node-RED.

To start Node-RED, use the node-red command in /QOpenSys/QIBM/ProdData/OPS/Node6/bin.

This command accepts parameters to define the running environment.

Use the node-red –h command to list the allowed parameters.

But, as we defined a new configuration in the settings.js file, we don’t need to define parameters when launching Node-RED.

Notice that if there is an error in the settings.js file, starting Node-RED will identify the problem immediately.

In the example shown in Figure 10, Node-RED cannot start due to the error in line 31 of the settings.js file (missing comma in line 30).

You can see that Node-RED is now listening on port 1988 instead of the default port 1880.

Open your browser and connect to http://<YOUR_SERVER_IP_ADDRESS>:1988. 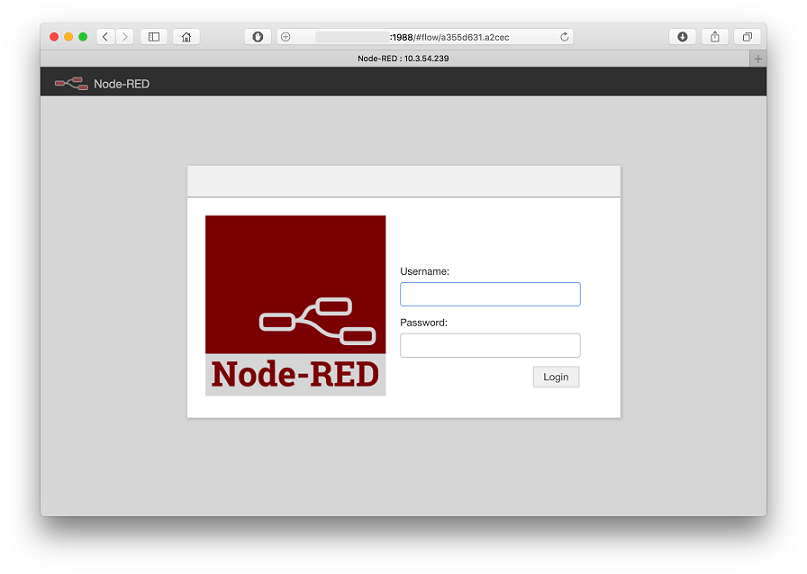 Enter user name and password as defined previously in the settings.js file. 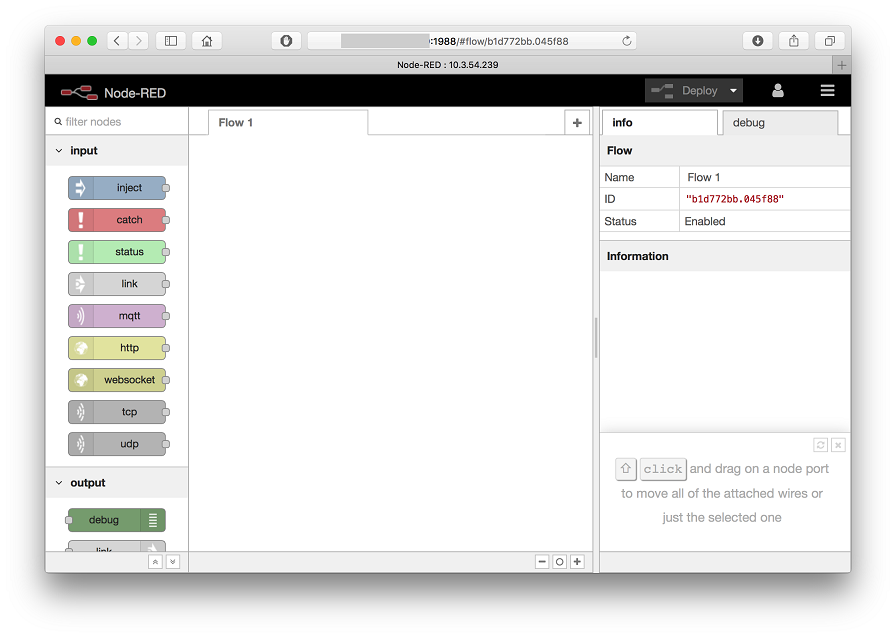 Now, let’s look at the Node-RED interface and create a flow.

Node-RED allows you to build applications using a graphic editor, by connecting the nodes you need. To create a new stream, drag the nodes from the palette (left menu) to the workspace (flow tab) and connect them as needed. 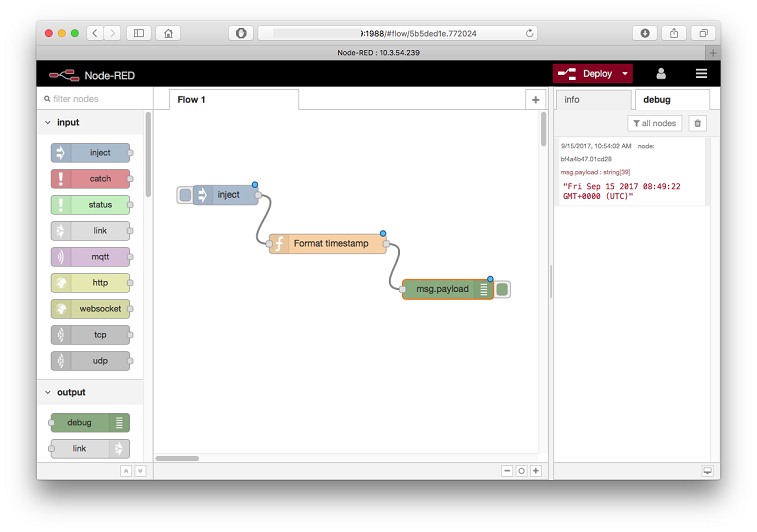 Where is the flow stored?

By default, Node-RED stores your data in the user’s home directory: $HOME/.node-red.

When you create flows in Node-RED on IBM i, they will be stored in a text file (in JSON format). For example, flows_<HOSTNAME>.json.

Specifying a new user directory when starting Node-RED allows to use another flow file.

Of course, we can implement more complex flows.
Let’s try to create a real-time chat app.

To create a real-time chat web app, import the code provided by Luiz Gustavo Ferraz Aoqui and Bradley Steinfeld in the IBM Developer article, “Build a real-time chat app with Node-RED in 5 minutes“.

This article describes how to create a chat application in Node-RED on IBM Cloud®, but, as it is Node-RED, it can run also on IBM i.

You need to get the (JSON) code, import it into Node-RED on IBM i, and deploy it.

We can now test this real-time chat web application by performing the following steps:

You can see how simple it is to import or export an application from one Node-RED environment to another, and to create a real-time chat application with only six nodes and one HTML page.

As we have just seen, thanks to the support of Node.js brought by 5733OPS, the installation of Node-RED on IBM i is easy.

Node-RED provides the possibility to create innovative prototypes and applications (such as a real-time chat application with only six nodes and one HTML page ) and to take advantage of Node-RED community contributions (nodes import / export).

So, let’s concentrate on business innovation and prototype on Node-RED without bothering about any technical complexity!

In the next article, we’ll see how to install cognitive IBM Watson® nodes in Node-RED and implement a IT helpdesk chatbot to automate the processing of passwords related tickets using the IBM Watson Assistant service on IBM Cloud, and of course, Node-RED on IBM i!

Connect with the the IBM i community

Connect, learn, share, and engage with other IBM i users as you follow what’s trending and join the discussion. Join now

GCC on IBM i