Learn about basic autoencoder concepts using TensorFlow, then implement them on a Jupyter Notebook

Deep learning is a vast field that employs artificial neural networks to process data and train a machine learning model. Two approaches used are supervised and unsupervised learning. In this tutorial, I focus on autoencoders, an unsupervised learning technique where the machine is using and analyzing unlabeled data sets. With this method, the model can learn patterns in the data and learn how to reconstruct the inputs as its outputs after significantly downsizing it.

The goal of the model is to minimize the difference between the original output and the reconstructed output, or in other words, to reduce the reconstruction loss.

Some popular applications of autoencoders are image denoising, dimensionality reduction, and feature extraction. This tutorial touches on some of these applications and introduces basic autoencoder concepts using TensorFlow, a Python library that is used to create deep learning models.

IBM Watson Studio is a data science platform that provides all of the tools necessary to develop a data-centric solution on the cloud. In this tutorial, I use an MNIST data set that is deployed on Watson Studio on IBM Cloud Pak for Data.

In the tutorial, you import a Jupyter Notebook that is written in Python into IBM Watson Studio on IBM Cloud Pak for Data as a Service, then run through the Notebook. The Notebook creates an autoencoder model by using TensorFlow based on an MNIST data set, encoding and decoding the data. After running the Notebook, you should understand how TensorFlow builds and runs an autoencoder. You learn how to:

It should take you approximately 1 hour complete the tutorial.

Step 1. Set up IBM Cloud Pak for Data as a Service

To set up IBM Cloud Pak for Data as a Service:

Step 2. Create a new project and import the Notebook

Step 3. Read through the Notebook

Spend some time looking through the sections of the Notebook to get an overview. A Notebook is composed of text (markdown or heading) cells and code cells. The markdown cells provide comments on what the code is designed to do. 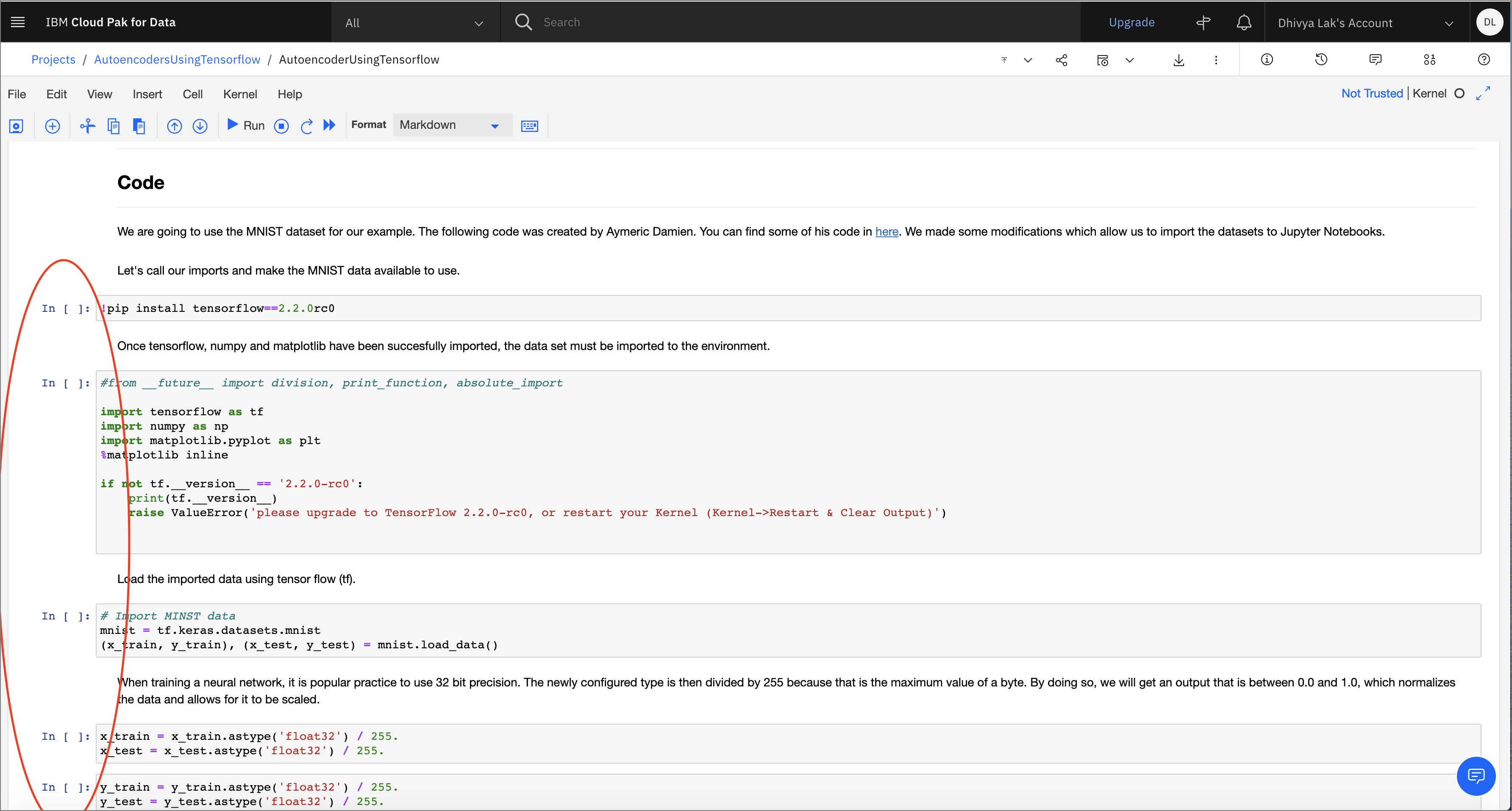 Note: Some of the comments in the Notebook are directions for you to modify specific sections of the code. Perform any changes as indicated before running the cell.

The Notebook is divided into multiple sections:

Section 6 contains the code to create, validate, test, and run the autoencoder model.

In this tutorial, you learned about autoencoders and ran an implementation on a Jupyter Notebook using Watson Studio on IBM Cloud Pak for Data as a Service. Utilizing Python libraries such as TensorFlow, MatPlotLib, and NumPy were also key to creating the model.

Build and train a neural network with nothing but JavaScript using Brain.js