You may have experienced the cannot mount rootfs error (followed by your Linux host getting a kernel panic) after you reboot your system. This will most likely happen after you have attached some storage volumes from external storage. Or, it can also happen when you have finished copying files and need a reboot to finish installation.

If this happens, your system will not restart. It could take time to troubleshoot this problem and fix it. This set of tips should help you solve the problem and save time.

Another culprit could be the fact that your Linux kernel needs to mount the root file system, but it can’t find the target device. In other words, your root file system doesn’t show up where it is supposed to be. For example, you install your Linux root file system on disk /dev/sda, but your system can’t mount it during reboot. There are two possible reasons for this:

So how does /dev/sda get renamed as /dev/sdb after your system reboots? In Linux, /dev/sd* means SCSI device. Linux will name these devices from sda to sdz (then sdaa to sdzz and so on). It will name the first SCSI device /dev/sda, the second /dev/sdb, and so on.

This is a straightforward explanation for what happens, but to add a little more context to the situation, let’s outline the Linux boot process. (If you understand the “root” causes, feel free to skip directly to the four tips on fixing it.)

Linux Loader (LILO) is a generic boot loader for Linux that does not depend on a specific file system and can boot an operating system from floppy and hard disks. You can choose from up to sixteen different images at boot time, and you can set various parameters (like root device) independently for each kernel. LILO can be positioned in the master boot record (MBR) or the boot sector of a partition; if you do the second option, something else must be placed in the MBR to load LILO.

Another boot loader is GNU GRUB (GRUB). GRUB is the reference implementation of the Multiboot Specification, which allows a user to have several different operating systems on his or her computer at once and to choose which one to run. GRUB is dynamically configurable, loading its configuration at startup and allowing boot-time changes, such as selecting different kernels or initial RAM disks. GRUB is highly portable, supports multiple executable formats, and is geometry-translation independent. GRUB can download operating system images from a network, so it can support disk-free systems. GRUB supports automatic decompression of operating system images prior to booting from them. And unlike other boot loaders, it can communicate with a user directly from a GRUB prompt.

The following steps outline how the Linux boot process works:

Each of the solutions discussed deals with step 5 from this list.

These two approaches can be implemented in the following four ways (each method is designed to let your Linux root disk show up to kernel/system in the first spot so that it can always use /dev/sda as device name):

If you are using IBM System x® or IBM BladeCenter® HS series, the procedure is:

Or, you can select the related PCI slot to let Daughter Card Slot 1 show up to system first with lowest device ID (see Figure 3).

Figure 3. Another set of start options 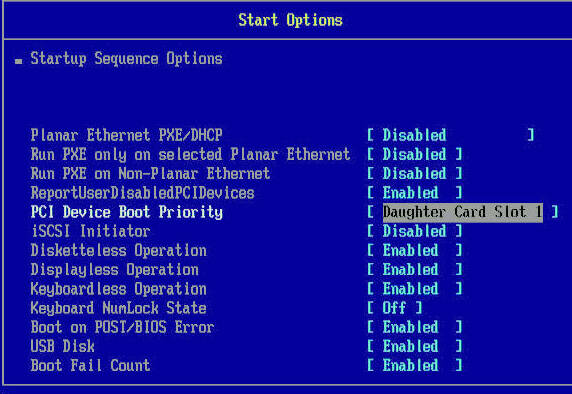 2. Plug your root file system disk into the first slot of its adapter

3. Edit the initrd image to change the storage adapter sequence

4. Use the label, UUID, or friendly name

Some Linux file system types (like ext2, ext3, reiserfs, swap, and XFS) support mounting the file system with a label instead of a device name, and you can use UUID instead if your Linux system supports it. Also, you can use friendly name if your device driver supports it.

These methods need your Linux system to support these features (like Red Hat Enterprise Linux V4 and later or SUSE Linux Enterprise Server V9 and later). Because label, UUID, and friendly name will bond with a dedicated device forever, no matter what device ID it has or what device name it gets, your system will always find your root file system disk.

This article demonstrates how to set up your system to avoid or fix Linux system cannot mount rootfs errors and also provides background on the boot process of a Linux system.