Porting and tuning tools for Linux on Power

Discover powerful tools that can make a big difference

I had the good fortune to be selected to present at the OpenPOWER Summit US 2018 on the topic of tools for porting and tuning for Linux on Power. The time slots for the presentations were fairly short (maximum of 30 minutes), but there was a lot I wanted to cover. So, I did my best to highlight the tools I felt had the most value, and perhaps lacked general awareness. A video of the presentation can be found at https://www.youtube.com/watch?v=PJwnfDSHOLI. (There are lots of great presentations from the OpenPOWER Summit US 2018 appearing on the OpenPOWER Foundation’s YouTube channel at: https://www.youtube.com/channel/UCNVcHm09eXVbvUzZkQs0_Sg.)

Instead of listening to me drone on for 30+ minutes, what follows is the basic content of the presentation in textual form, not verbatim and slightly more detailed – a better reference.

As a general note, I classify the use-cases for the tools in the following three ways:

The IBM® Advance Toolchain is a software suite containing the latest releases of compilers, various libraries, and various tools related to application porting, tuning, and debugging. Recent releases of these components include support for the latest features and the latest optimizations for OpenPOWER and IBM Power® processor-based platforms. The purpose of the Advance Toolchain is to make these more modern software components available on distributions which only provide significantly older releases. The distributions, justifiably, are reluctant to change major components of the operating system like compilers and system libraries as the risk to stability is not worth the opportunity for better performance. Some distributions have made strides in providing developers with much more recent components as a developer toolset that provides a later compiler and its prerequisites. The Advance Toolchain goes farther in providing not only the latest compilers but also the latest releases of many system libraries. In addition, those system libraries are built with the latest compilers. In this way, applications built with the Advance Toolchain benefit not only from new optimizations in the latest software, but also by having that software compiled with the new compiler.

Further, the Advance Toolchain is where new compatibility features may appear first. For example, there is an ongoing effort under the auspices of the GCC project to provide compatible implementations of the Intel vector intrinsics. Those would not have appeared in major Linux distributions for a year or more, but have already appeared in the Advance Toolchain.

The Advance Toolchain is supportable through IBM Support Line. Updates with bug fixes and security-related fixes are released often. It is available for free download, and is entirely open source at https://github.com/advancetoolchain/advance-toolchain.

There are two variants of IBM XL C/C++ for Linux:

Beyond standard compilation, the IBM XL compilers also offer several advanced features which can be used to performance advantage, one of which falls in the gray box category: automatic parallelization. If this is enabled using a command line option, code can be generated to automatically use the multithreading capabilities of the Power system for performance advantage.

The IBM XL compilers also include the following advanced features that can be used to further exploit the capabilities of the Power systems with source code changes:

The command-line Migration Advisor scans the source code looking for likely portability issues. As of this writing, the list of checkers is slightly fewer for the command-line version:

The project is written in Python, is open source, and can be found at: https://github.com/open-power-sdk/migration-advisor.

Use of the command-line CPI Breakdown tool is simple. The first step is to record the hardware event counts.

Note that the scenario (“./load” in this example) will be run several times in succession in order to collect all relevant hardware performance events, as only a handful are collected during each run.

The second step is to display the CPI breakdown.

There is a lot of information displayed. For convenience, there are command flags which can limit the output.

Because the ultimate goal is to narrow down where in the code adverse events are happening, there is a further convenience function that can drill down on the most frequently occurring events. New profiling runs are launched in which those specific events are recorded and the profiling information, including source, line, and potentially instruction are included in the command output.

The project is written in Python, is open source, and can be found at: https://github.com/open-power-sdk/cpi-breakdown

There is a tool called curt on AIX that displays statistics related to system utilization. A new tool for Linux, also called curt is inspired by the AIX tool (but is otherwise unrelated).

Statistics reported by the Linux curt tool include:

Use of the tool is a two-step process:

With the most recent version of curt, both recording and reporting can be done in a single, simple step: $ ./curt.py --record all command

The project is written in Python, is open source, and can be found at: https://github.com/open-power-sdk/curt.

The Power Functional Simulator is a full-system simulator for Power. This very powerful tool provides a complete Power environment when a Power processor-based system is otherwise unavailable or impractical. Given an image of an installed file system, it will boot through firmware and operating system to a login prompt for a Power processor-based development environment.

The Power Functional Simulator can be found at: https://developer.ibm.com/tutorials/download-and-install-sdk-for-lop/.

Convenient wrapper scripts, which greatly simplify getting an environment established, can be found at: https://github.com/open-power-sdk/power-simulator.

The environment provided by the Power Functional Simulator is single core, single thread. There are simulators available for Power8, Power9, and Power10 processors. A simulator is a great way to begin getting experience with Linux on Power, beginning a porting effort, and even for establishing a robust cross-compilation and runtime environment.

Using the Performance Simulator is a three-step process:

You can view the resulting instruction timing report with the jviewer. 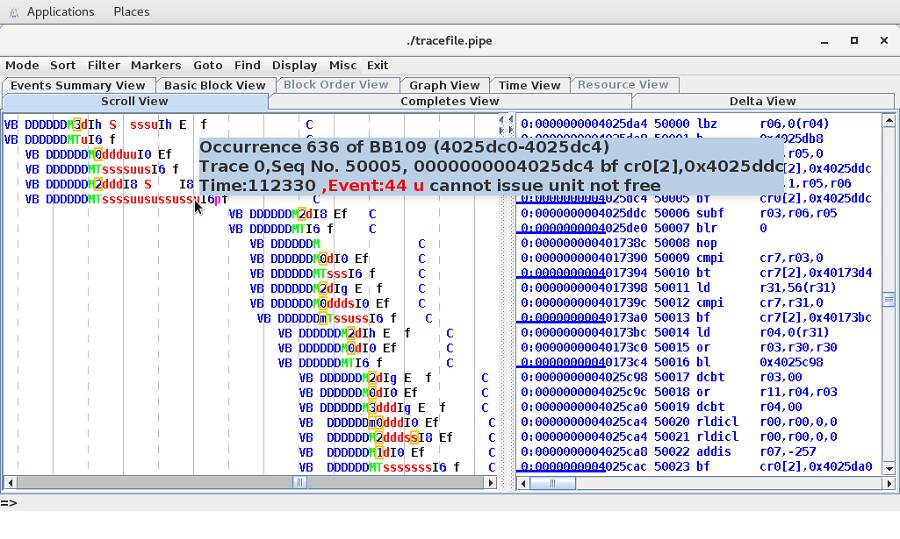 Each phase of each instruction’s lifetime is shown visually in the main pane, lower left. The instruction disassembly is in the rightmost pane. Hovering over any of the character mnemonics in the main pane will display more details about it. In the example, the cursor is over a ‘u’ near the center of the pane. The corresponding explanation is “cannot issue unit not free”. This instruction is currently waiting for the branch unit to be made available from the processing of a previously executed instruction.

The pipestat tool operates on the output of the Performance Simulator cycle-accurate timer, and performs detailed analysis, reporting the following information:

The pipestat tool produces a lot of useful output. Extracted below are a few snippets.

The information displayed may be a bit cryptic, but there is comprehensive documentation that comes with pipestat. The pipestat tool can be found at https://developer.ibm.com/tutorials/download-and-install-sdk-for-lop/.

No Instruction Set Architecture (ISA) can have every possible useful vector instruction and an associated compiler built-in. The pveclib project provides some well-crafted implementations of useful vector functions which are not part of the Power ISA. A sampling of the functions includes:

The pveclib project is open source and can be found at https://github.com/open-power-sdk/pveclib.

SPHDE is open source and can be found at https://github.com/sphde/sphde.

The Linux Performance Customer Profiling Utility (LPCPU) is a free download which can be used to collect system information and system performance-related data. Use of LPCPU is a three-step process: 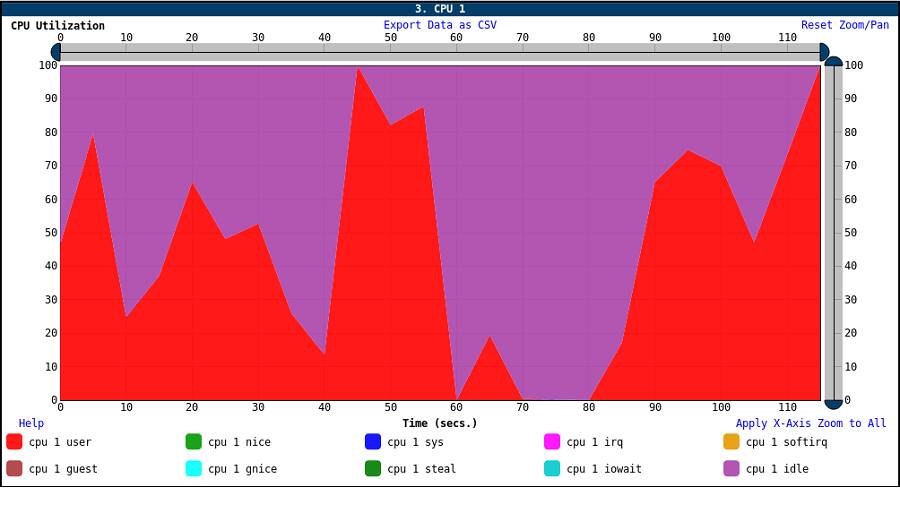 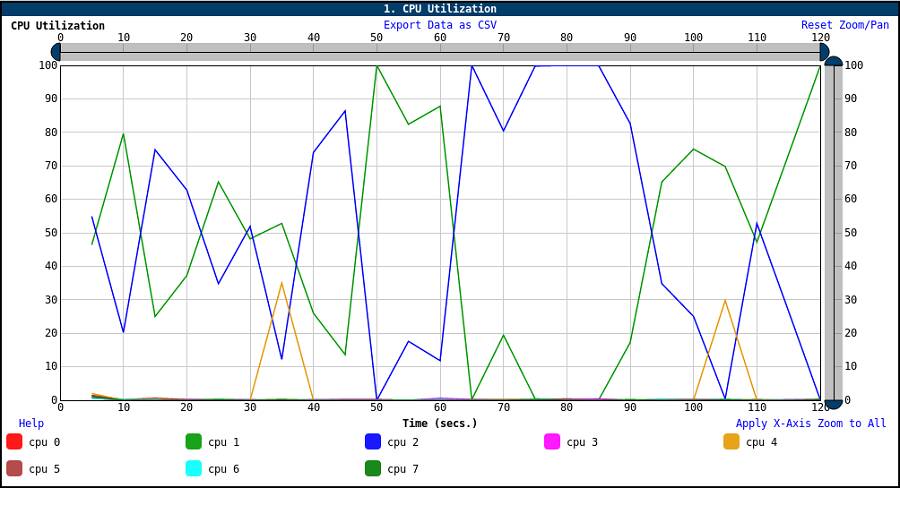 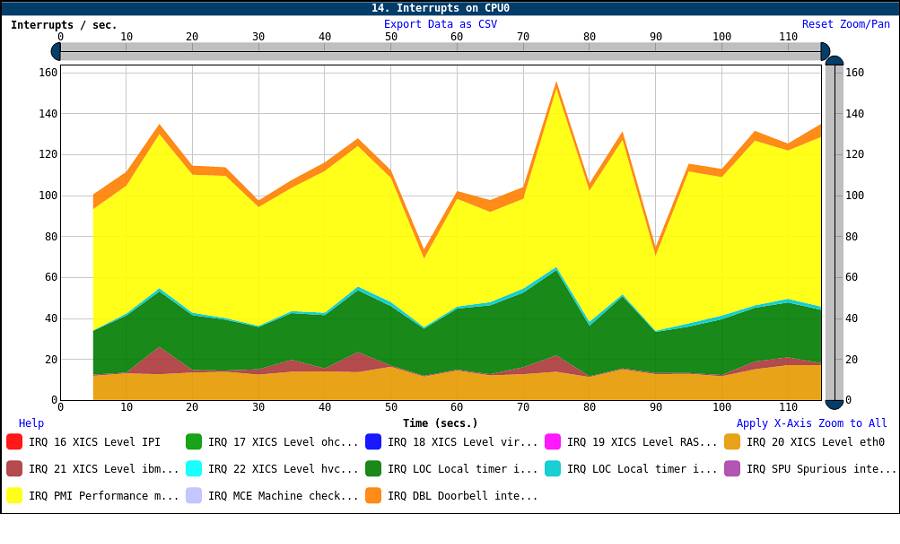 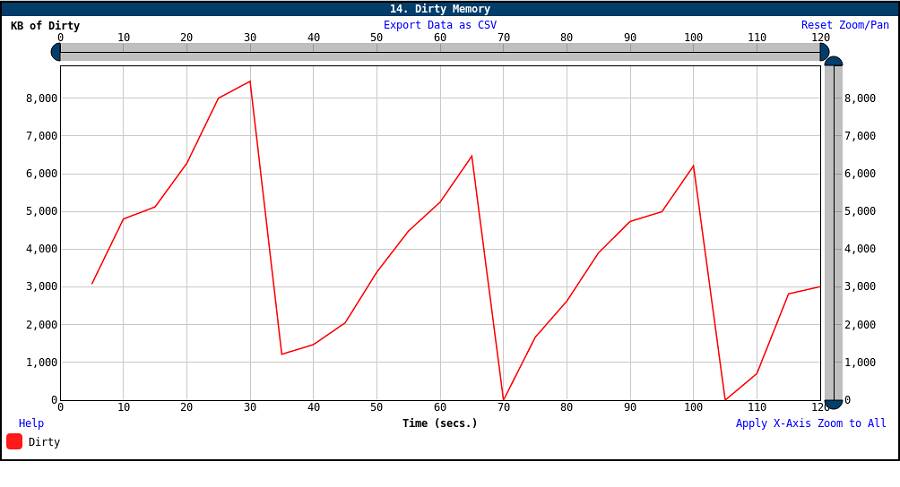 The LPCPU tool is open source and can be freely downloaded at https://github.com/open-power-sdk/lpcpu.

Formal support is available for the Advance Toolchain and the XL compilers.

The Linux on Power Developer Portal is a hub for all sorts of information about hardware and software components in the Linux on Power ecosystem. Refer to: https://power-developer.mybluemix.net/. Within the Portal, informal support can be requested by asking questions on the dW Answers forum at: https://developer.ibm.com/answers/smartspace/linuxonpower/index.html).

Given all the nifty tools mentioned, where should one start when embarking on an effort to port code to Linux on Power?

For interpreted code, including Java, Python, Perl, and shell scripts, just move the code to Linux on Power, and it should run without modification.

For compiled code, with little to no source code analysis:

As always, consider alternative approaches to common, important functionality that might be provided by SPHDE or pveclib.

For system-wide performance analysis, use LPCPU and/or curt.

Hopefully, the collection of tools explained in this article provide what’s needed to get the best results as quickly as possible. If there is a gap in a tool’s functionality or documentation, or a new tool would help, or reality isn’t meeting expectations, ask in one of the support channels! We’re here to help!