Explore the Node ecosystem and use npm to find, install, and manage Node.js packages

Package management is an integral part of programming with Node.js. More than just a program, the Node package manager (npm) is an entire ecosystem. In the seventh part of the Node.js Learning Path, get familiar with npm and all of its components:

Quick note: When I’m talking about the npm ecosystem, I’ll refer to it as npm. When I specifically referring to the npm CLI, I’ll use npm.

The code you need to follow along with the examples in this learning path are in my GitHub repo.

In Unit 3, you learned that the npm registry contains hundreds of thousands of open source Node packages, which are backed by a large and engaged developer community.

You probably inferred from its frequent appearance in Units 4 and 5 that the npm registry is the place to go for modules to use in your Node applications.

It’s one thing to locate and install a package when you know its name, but let’s say you’re looking for a kind of software and not a particular package. How would you find what you need in the registry?

As an example, suppose you’re looking for a JavaScript linter. To find one of the many linters in the npm registry, go to the npm website. Type “linter” in the search field at the top of the page, and you’ll see the following result: 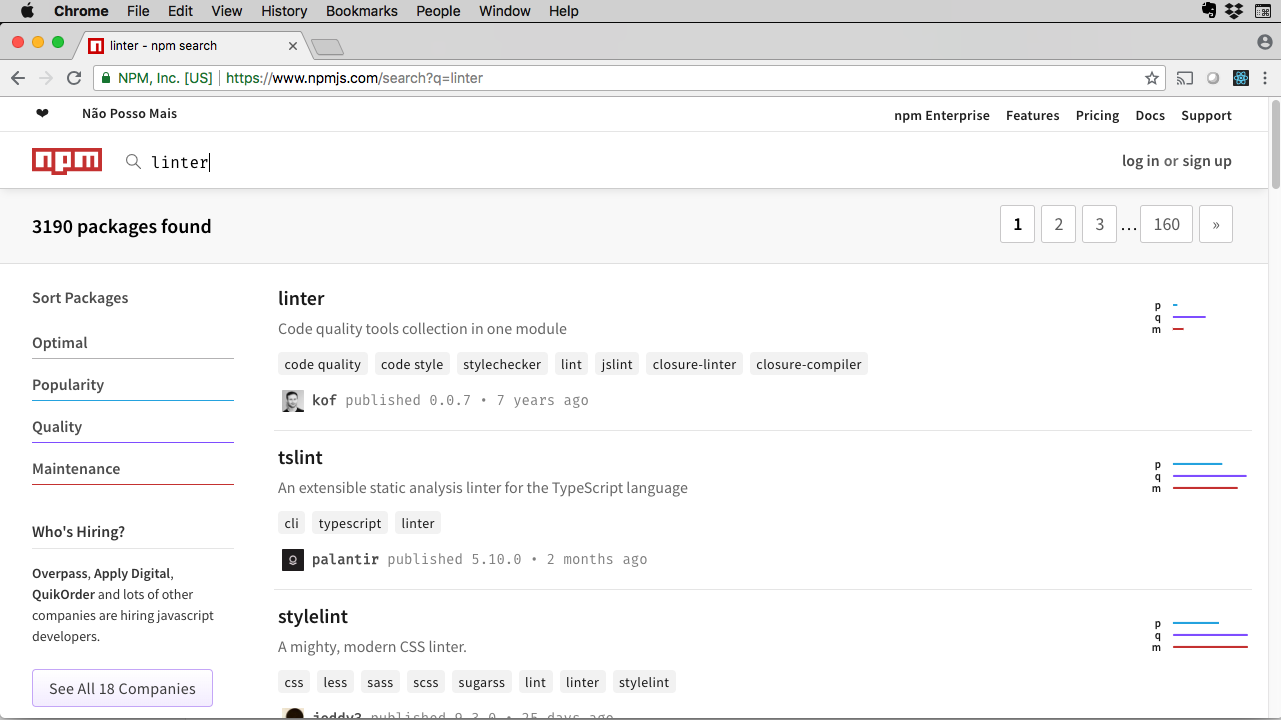 That’s a lot of choices! With more than 3,000 packages matching the keyword “linter,” how will you decide which one to use?

For a start, you can narrow the search a bit. As you know from Unit 3, JavaScript is an ECMAScript implementation, so let’s see what happens after adding “ecmascript” to the search. 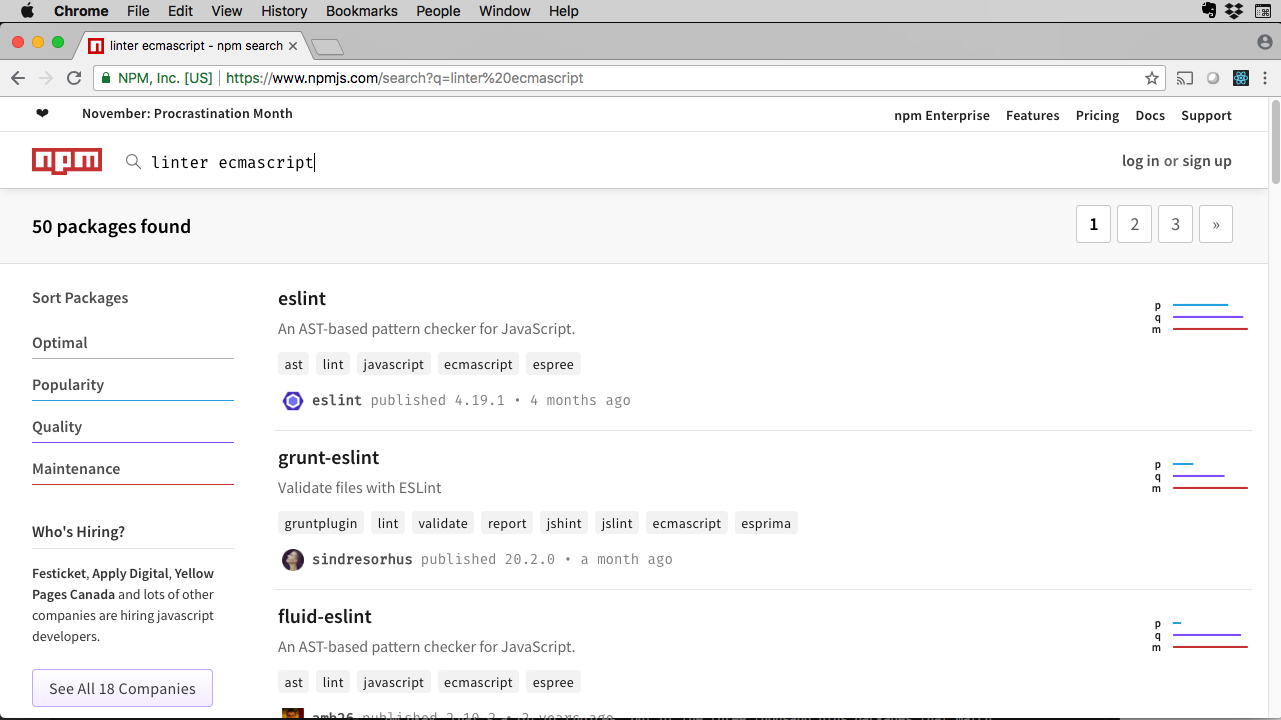 Okay, that’s better. It’s easer to sift through 50 packages than 3,000. But wouldn’t it be helpful to narrow the search even further?

The search capability for npmjs.com (provided by npms.io) offers three key metrics to help you:

Every package in the npm registry is subject to the algorithm that computes these scores. The metrics mean pretty much what you think they should, but if you want a more detailed explanation, check out the About page at npms.io.

Scores are presented in a bar graph format at the top right corner of each entry using p for popularity, q for quality, and m for maintenance. Hover your mouse over each link and the associated numerical score should pop up. (I’m using Chrome; your mileage may vary.)

You can also search packages directly at npms.io, where the same search for ecmascript linter produced 53 results: 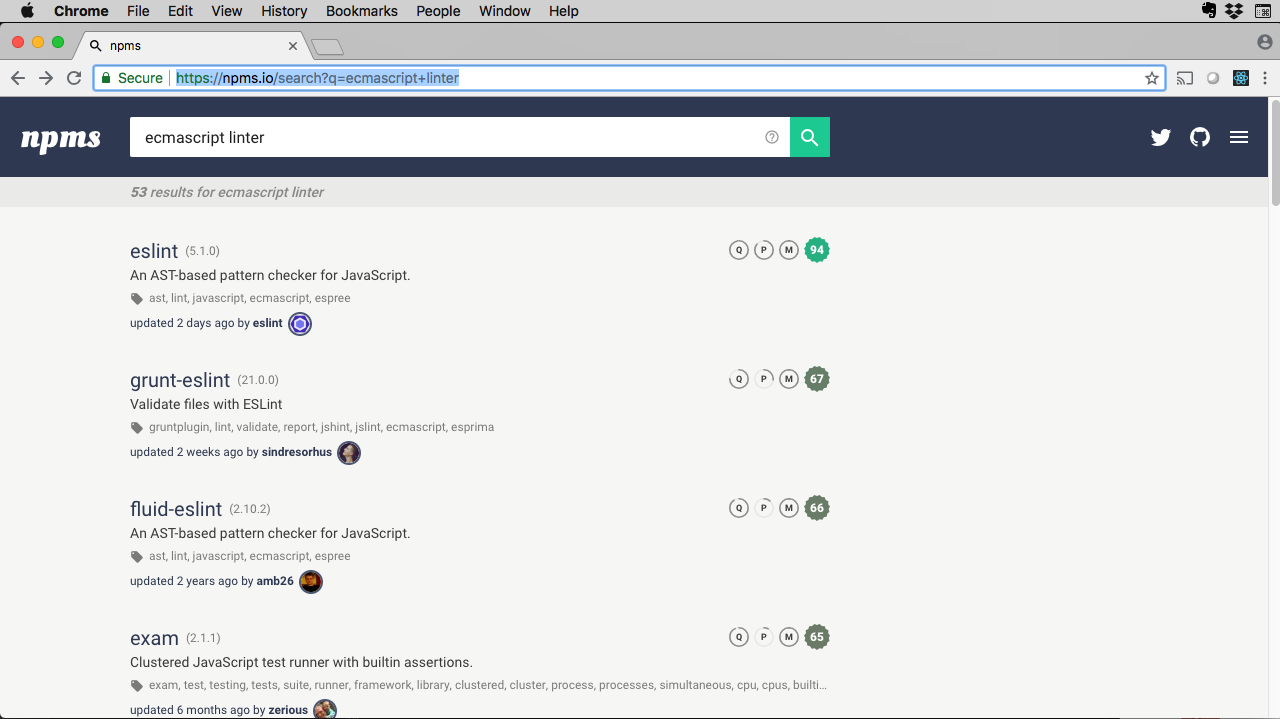 In this example, let’s say you choose the package with the highest average of quality, popularity, and maintenance. You end up with eslint, which scores 97, 85, and 100 (respectively) for an average of 94.

Once you choose a package, you need to install it, which brings us to the npm command line interface (CLI).

The CLI is a program that acts as the package manager for your Node programs. It ships with Node.

The npm you know

You’ve already used npm several times in this course. In Unit 4 you used npm to install packages like nodemon:

Now we’ll look more closely at npm‘s functionality and what you can do with it.

Install a local package with npm

In Unit 6, you used npm to install the sqlite3 module, which was specified as a dependency in the package.json file for the shopping list application:

When npm is supplied with no arguments, it installs all modules listed in the dependencies object in package.json. (You’ll learn more about package.json in Unit 8.)

Install a new set of packages

We’ll use npm install with a different package.json than the one we used in Unit 6. This will install a new set of packages and dependencies.

To start, navigate to the Node.js/Course/Unit-7 directory in my GitHub repo, where you’ll see the following package.json. Note that this file includes a pretest script to run the eslint JavaScript linter.

Listing 2. package.json with the eslint dependency

If you run npm install, you will get output like this:

Get info about installed software

To see which version of eslint was installed, run the npm list eslint command:

To see the full dependency tree in node_modules, run npm list with no module specified. The output looks like this (abbreviated because it’s quite lengthy):

Once eslint is installed, you can find out what kind of error messages it produces using the strongloop coding style against logger.js.

To run eslint, run the pretest script from Listing 2 above, this time using the npm run pretest command:

It isn’t uncommon for a linter to discover multiple issues the first time you run it. I actually cleaned up logger.js to capture the above output.

Additionally, you can configure both the strongloop config and eslint rules. You can see this in the .eslintrc.json file in the Unit-7 source, where I’ve overridden the max-len rule (80 characters seems conservative to me).

Just like local packages, you’ve already had some practice with global packages. In Unit 4 you installed nodemon, which is a global package. As I mentioned there, the global install adds the package to your PATH so you can run it from anywhere on your computer, which is especially useful for CLI packages like nodemon.

The command to install a global package is npm install -g PACKAGE_NAME, where PACKAGE_NAME is the name of the package, such as nodemon.

The developers at npm have a rule of thumb for when to install packages globally, and for when not to:

npm can do more than just simple installations. Two of my favorite utilities for the npm CLI are npm prune and npm doctor.

If you’re like me, you experiment while developing, trying out multiple options before landing on your final solution. Unfortunately, this can lead to extraneous dependencies, which are installed packages that you don’t use.

As an example, let’s say you want to try fluid-eslint, so you install it:

An installed top-level package that isn’t listed as a dependency in package.json — and isn’t a dependency of another package — is considered extraneous. What you need is a way to remove extraneous dependencies, which is where npm prune comes in handy.

Notice that fluid-eslint is listed as extraneous.

Now you can use the npm prune CLI utility to remove fluid-eslint and its dependencies from node_modules:

If you run npm install with npm list fluid-eslint you’ll see all traces are gone:

npm doctor is a handy utility to make sure your npm environment is running correctly. Its output looks like this:

It runs a number of checks, including an npm ping to make sure your computer can connect to the npm registry (at registry.npmjs.org), a version check of node and npm, and the path to your git program, among others.

For more information about npm doctor check out its docs page.

A complete guide to npm is beyond the scope of this course, especially since that information already exists in the npm docs. If you want to know more, be sure to check the npm documentation. You’ll use npm throughout the rest of this course, so I encourage you to become familiar with it.

While npm is the oldest Node.js package manager (going back to version 0.0.1 released in January 2010), it isn’t the only one. In this section, I show you a few you should know about, starting with what is probably the most popular npm replacement: Yarn.

Yarn is a package manager for Node that works with an npm registry just like the npm CLI does. It was developed by Facebook and released in October 2016.

Yarn offers a number of improvements over npm, including:

I say Yarn uses an npm registry because at the time of this writing registry.yarnpkg.com is actually a reverse proxy to registry.npmjs.org, mostly for performance reasons. While there is a yarnpkg GitHub issue proposing to deprecate registry.yarnpkg.com, the registry in use should be invisible to most Node developers.

You install Yarn from the npm registry, as a global package using this command: npm install -g yarn. Yarn works with package.json just like npm. To install a package, you just use yarn install instead of npm install.

Then you can run yarn pretest just like you did npm run pretest (Yarn figures out that pretest is a script and lets you skip the run sub-command):

Notice that you get the same output from eslint as you did from npm.

Just like npm, Yarn features a number of very handy utilities. why is one of my favorites.

When perusing a package.json or node_modules directory, you might wonder why a given package is used. In Yarn, you don’t have to wonder. As an example, let’s say you’re in node_modules and see a package called acorn:

The full dependency path is eslint > espree > acorn-jsx > acorn from this line:

It even tells you how much disk space it’s taking up, which is pretty cool.

The Node ecosystem includes other package managers, but most are not drop-in replacements for npm; instead, they offer certain features that run in addition to npm.

Use the npm website when you need help or other information about Node. You can use it to access Node documentation, and it’s also where you can get involved as a developer in Node.js projects.

Let’s say you’ve created an awesome package and want to share it with the world via the npm registry. Now what?

To publish an npm package at registry.npmjs.org you’ll need to set up an account.

Once you’ve verified your email address, you’ll be able to share your new package in the npm registry. You’ll need to follow certain standards and procedures.

Once you’re signed in, the front page has some interesting metrics:

In this unit you learned that npm is three things:

Check the references to learn more about the npm ecosystem, the npm CLI, and the npm website.

This Learning Path continues into Unit 8, where you’ll dive deeper into managing dependencies in Node.

Fill in the blank

Answers for true or false questions

Answers for fill in the blank questions

IBM and Node.js: A look at the past, present, and future

Create a database in a Docker container for local development