The Linux® kernel is one of the widely used operating systems that is well known for its availability. The robustness that makes it carrier grade comes from thousands of test runs against the Linux kernel by various individuals and companies for all kernel releases. Most of the issues are discovered and fixed during the release cycle and some get discovered later by the users or by special interest groups, such as security analysts who test the kernels extensively. Some of these issues can even compromise the system by either denial-of-service attack (DoS) or by gaining superuser privileges if the systems are not patched with the security fixes when available.

Updates to the kernel require scheduled downtime, and a lengthy and well-planned schedule that affects the least number of users, and a backup plan in case of system unavailability after the update. The live patching infrastructure that is introduced in the Linux kernel helps updating the running kernel with security fixes by live patching it, without any disturbance to the mission-critical workloads running on the system or a need to restart the applications. All the running processes in the system start seeing the fixed version of the affected kernel functions immediately without any delay after the kernel is live patched.

The live patching infrastructure is now available on little-endian mode in the IBM Power Systems™ server (ppc64le). Live patching is achieved by redirecting the call to a kernel function to its patched version with the fix and it depends on the Ftrace tracing framework that is available in the Linux kernel to profile kernel functions during their invocation. Every redirection requires a call back to be registered with the Ftrace framework to redirect any call made to a function to its patched version. See the following figure for more details. 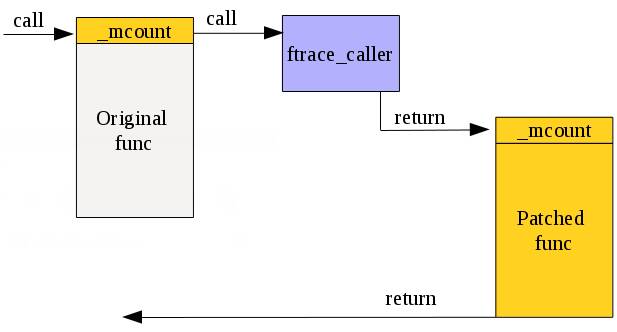 Before describing how redirection works, this section provides high-level information about the Ftrace framework. Function profiling is enabled only if the compiler (GCC) supports the -pg flag. When the Linux kernel is compiled with the -pg flag, the compiler inserts a branch instruction to a special compiler-generated function _mcount in the prologue sequence of every kernel function. See the following figure for more details. 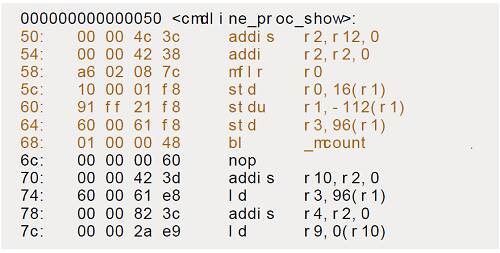 Note: Not every kernel function is traceable due to their implications.

Live patching, like Ftrace on Power Systems, depends on compiler support. In case of live patching, compiler support for the -mprofile-kernel flag is required. This flag inserts the branch to the _mcount function immediately after the function local entry setup and before stack creation in the prologue sequence of the function. Compare the instructions of Figure 3 with Figure 2 for _mcount location. The reason is that during function redirection, all the registers and arguments that are available for the original function must be available to the patched function too.

To enable the live patching infrastructure, you need to build kernel with the following configuration enabled:

This section describes the steps to build a simple live patching kernel module and how to use it to live patch the kernel:

Build a module with the modified version of the function that you want to live patch, along with other functions that are required to register the patch with the live patching infrastructure. Authoring a live patch module is similar to writing any other kernel module. For example, consider a sample patch.

Enabling or disabling the patched version of the kernel function

One advantage that the live patching infrastructure provides is rolling back to the original functionality (consider the previous example, where disabling the live patch would roll back to display the original kernel command line string).

After the module is inserted, a directory with the module name is created in the /sys/kernel/livepatch/

Re-enable the live patched version by running the following command:

You can remove the live patch module like other kernel modules. Ensure that the module is disabled by passing the following command before unloading the module:

After the patch is disabled by the kernel live patching infrastructure, it writes “0” into the /sys/kernel/livepatch/my_first_livepatch/transition file indicating that it is safe to remove the live patching module. The module can be unloaded after the transition file reads “0” using the rmmod command.