This tutorial is part of the Introduction to IBM Watson Studio learning path.

This tutorial explains how to graphically build and evaluate machine learning models by using the SPSS Modeler flow feature in IBM® Watson™ Studio. IBM Watson SPSS Modeler flows in Watson Studio provide an interactive environment for quickly building machine learning pipelines that flow data from ingestion to transformation to model building and evaluation, without needing any code. This tutorial introduces the SPSS Modeler components and explains how you can use them to build, test, evaluate, and deploy models.

As with the other tutorials in this learning path, we use a customer churn data set that is available on Kaggle.

To complete the tutorials in this learning path, you need an IBM Cloud account. You can obtain a free trial account, which gives you access to IBM Cloud, IBM Watson Studio, and the IBM Watson Machine Learning Service.

The steps to set up your environment for the learning path are explained in the Data visualization, preparation, and transformation using IBM Watson Studio tutorial. These steps show how to:

You must complete these steps before continuing with the learning path. If you have finished setting up your environment, continue with the next step, creating a model flow.

You have now imported an initial flow that we’ll explore in the rest of this tutorial. 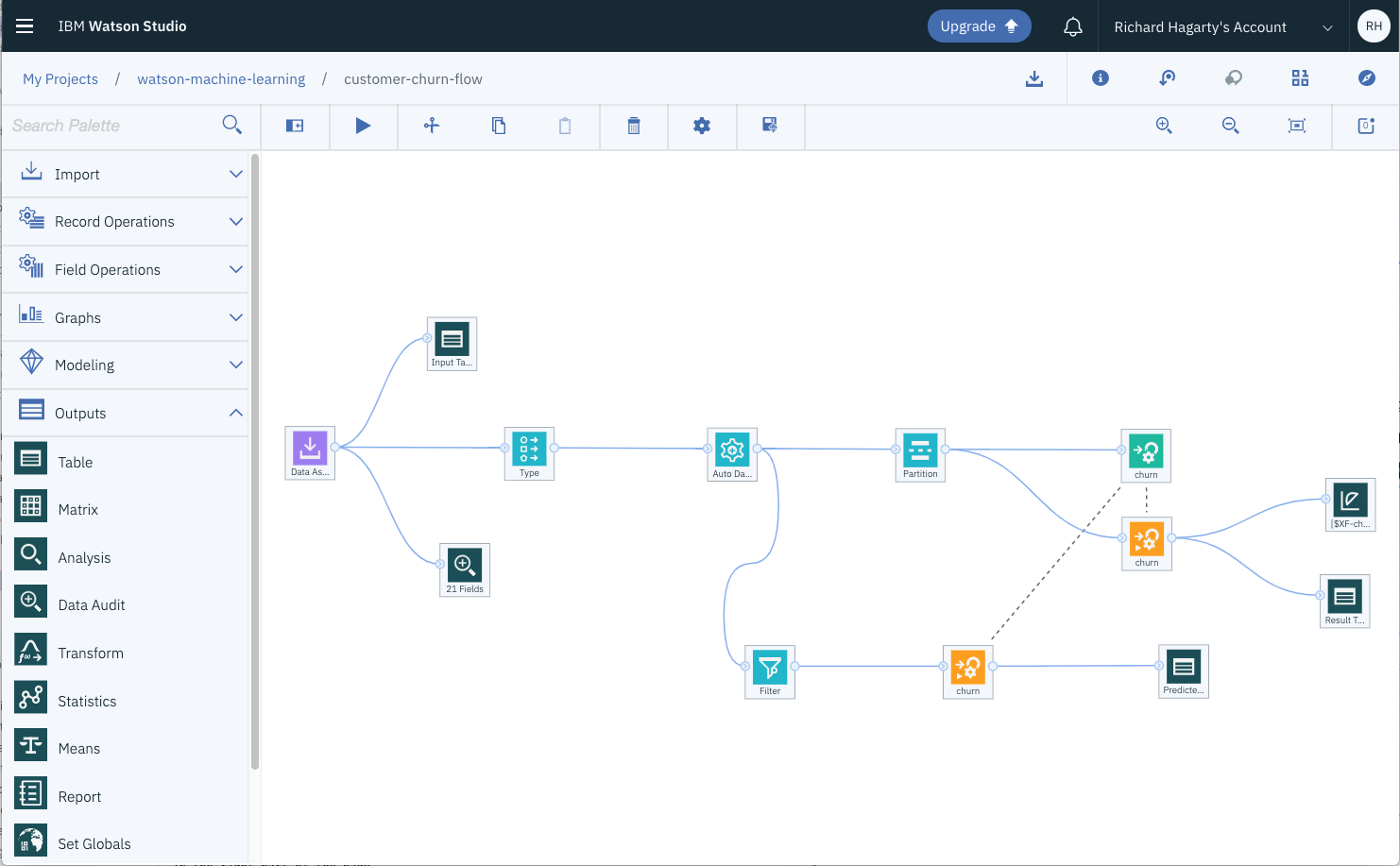 Under the Modeling drop-down menu, you can see the various supported modeling techniques. The first one is Auto Classifier, which tries several techniques and then presents the results of the best one.

The main flow itself defines a pipeline consisting of several steps:

Additional nodes have been associated with the main pipeline for viewing the input and output. These are:

Other input and output types can be viewed by selecting the Outputs drop-down menu.

To run the flow, you must first connect the flow with the appropriate set of test data available in your project.

Running the flow creates a number of outputs or results that can be inspected in more detail. 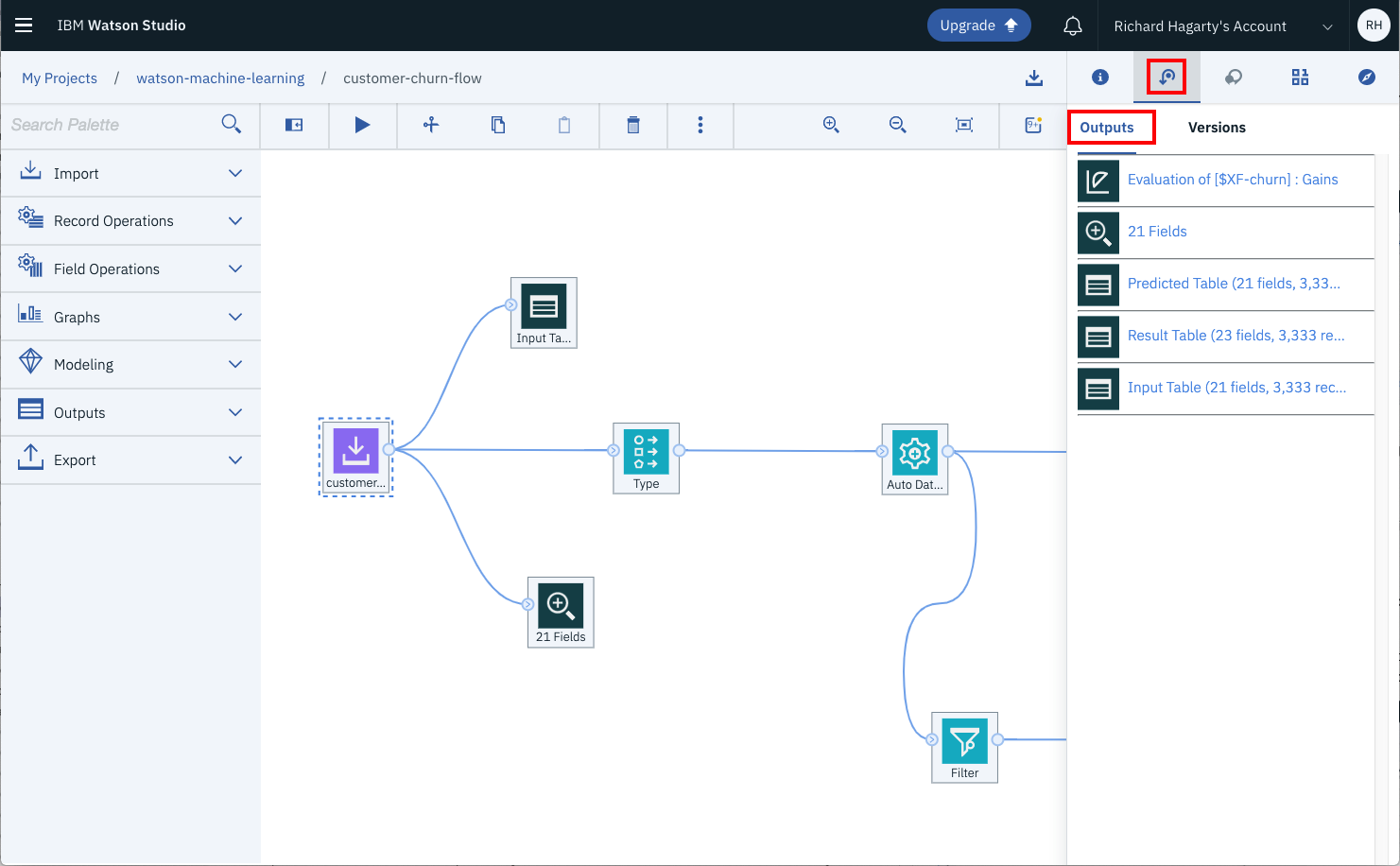 Now that you have run the flow, take a closer look at the data.

The last interaction might run part of the flow again but has the advantage that the page provides a Profile tab for profiling the data and a Visualization tab for creating dashboards. 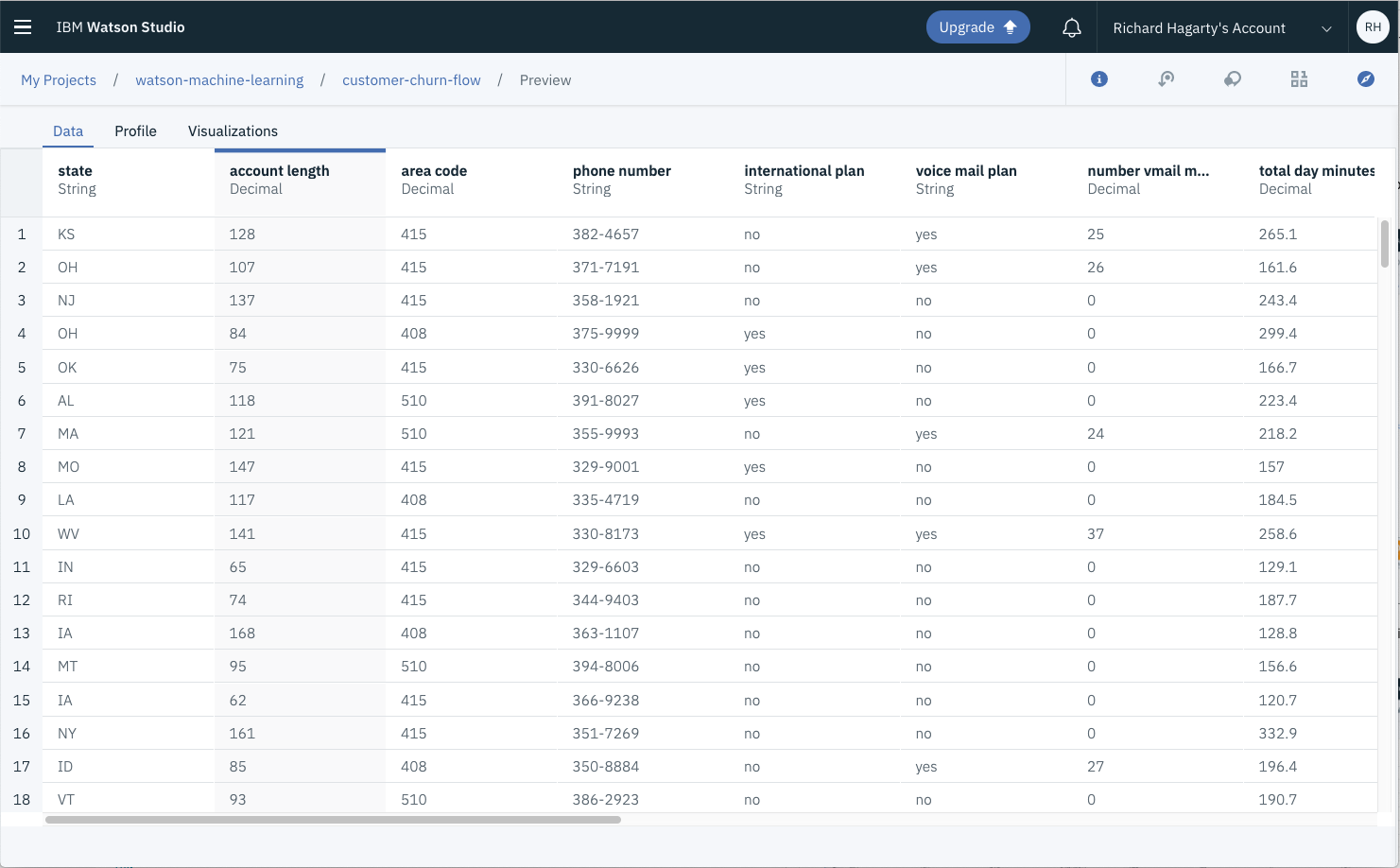 Now, let’s take a closer look at each of the data columns, such as the values for their minimum, maximum, mean, and standard deviation:

This gives you an overview like the one in the following image. 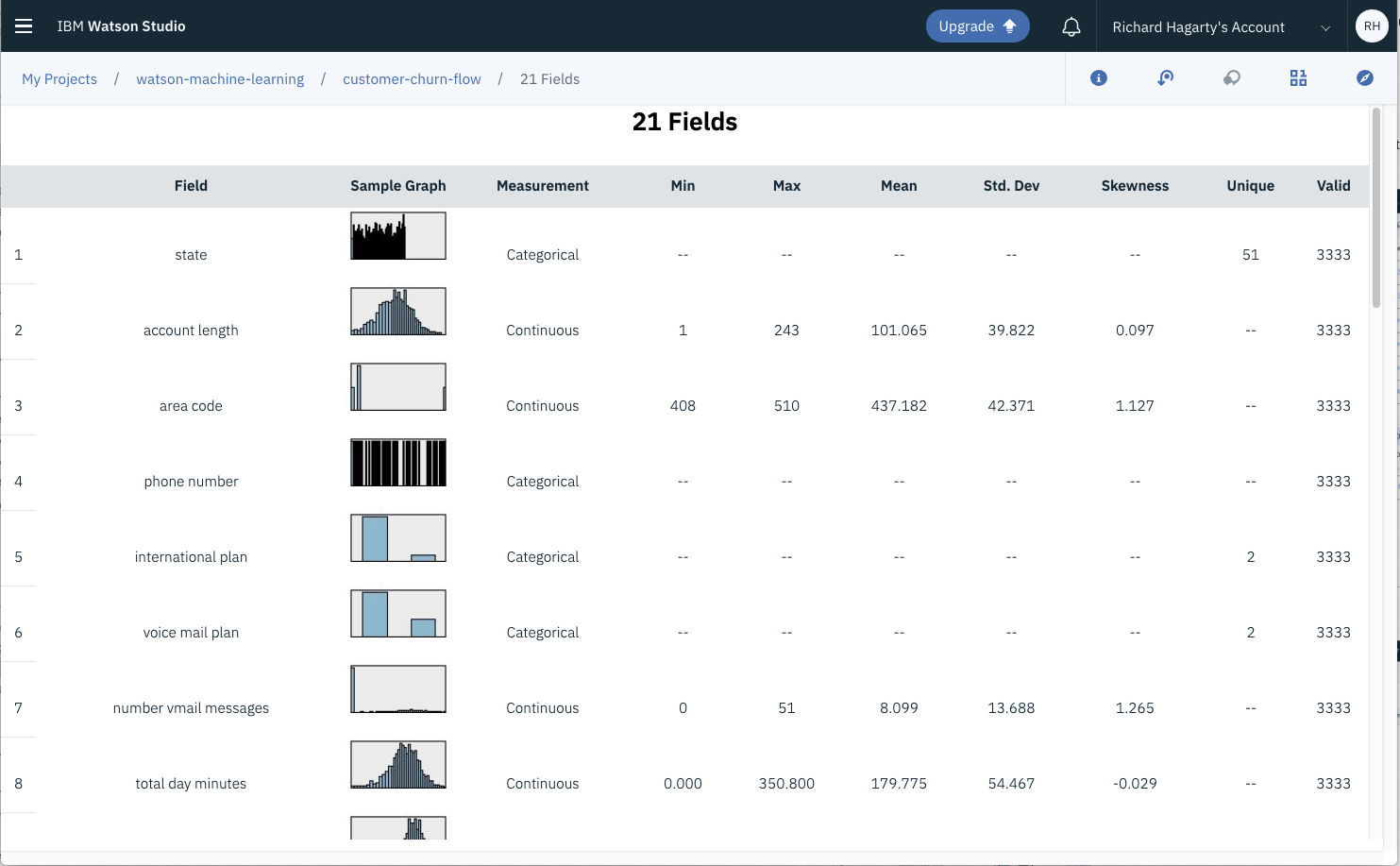 For each feature, the overview shows the distribution in graphical form and whether the feature is categorical or continuous. For numerical features, the computed min, max, mean, standard deviation, and skewness are shown as well. From the column named Valid, you can see that there are 3333 valid values, which means that no values are missing for the listed features and you do not need to bother further with this aspect of preprocessing to filter or transform the columns with lacking values.

You can change the initial assessment of the features made by the import by using the Type node, which happens to be the next node in the pipeline. To achieve this:

This provides a table that shows the features (such as fields), their kind (for example, continuous or flag), and role, along with others. 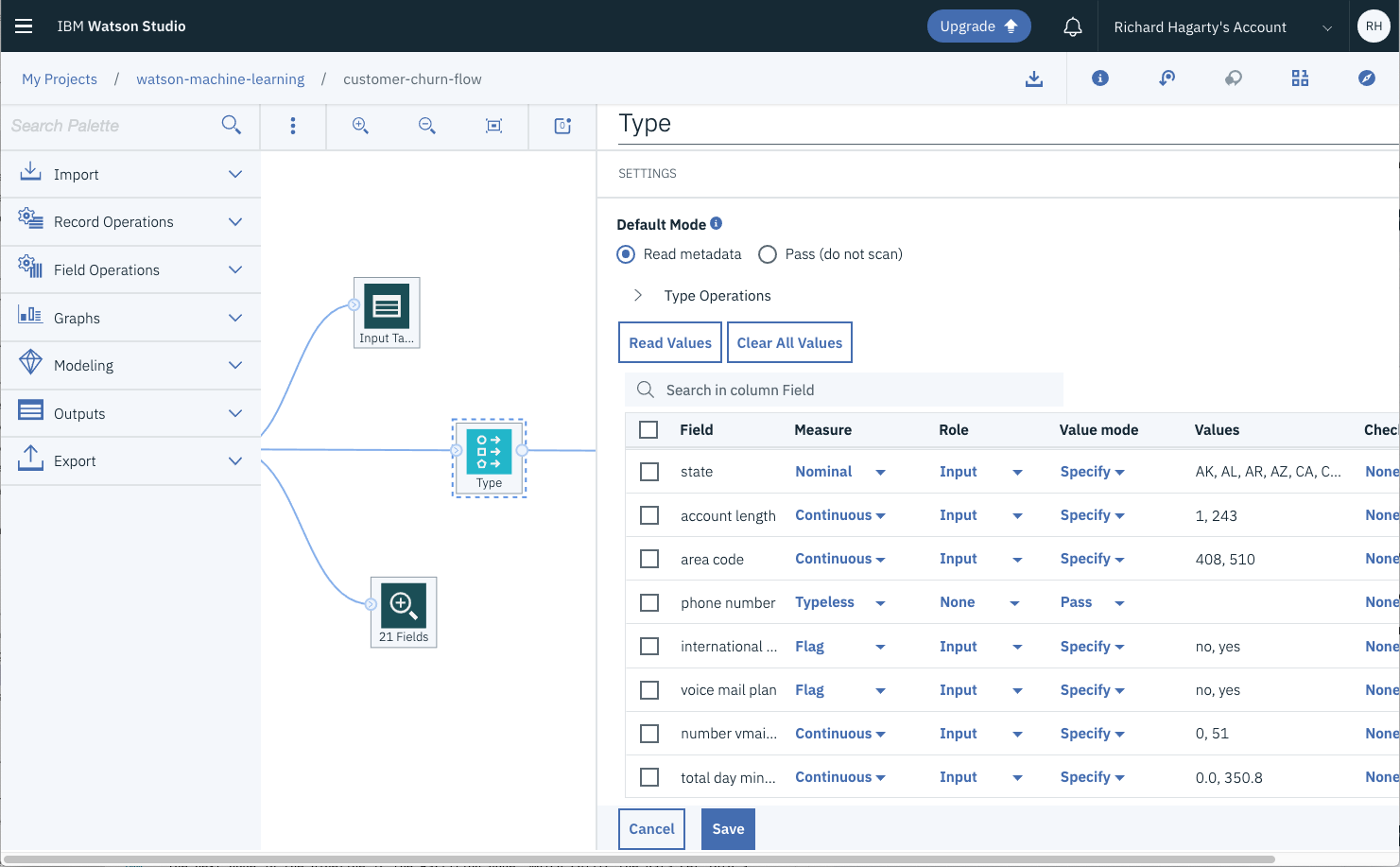 The Measure can be changed if needed using this node and it is also possible to specify the role of a feature. In this case, the role of the churn feature (which is a Flag with True and False values) has been changed to Target. The Check column might give you more insight into the values of the field.

Click Cancel to close the property editor for the Type node.

The next node in the pipeline is the Auto Data Prep node. This node automatically transforms the data, such as converting categorical fields into numerical ones. To view its results:

This node offers a multitude of settings, for example, for defining the objective of the transformation (optimize for speed or for accuracy). 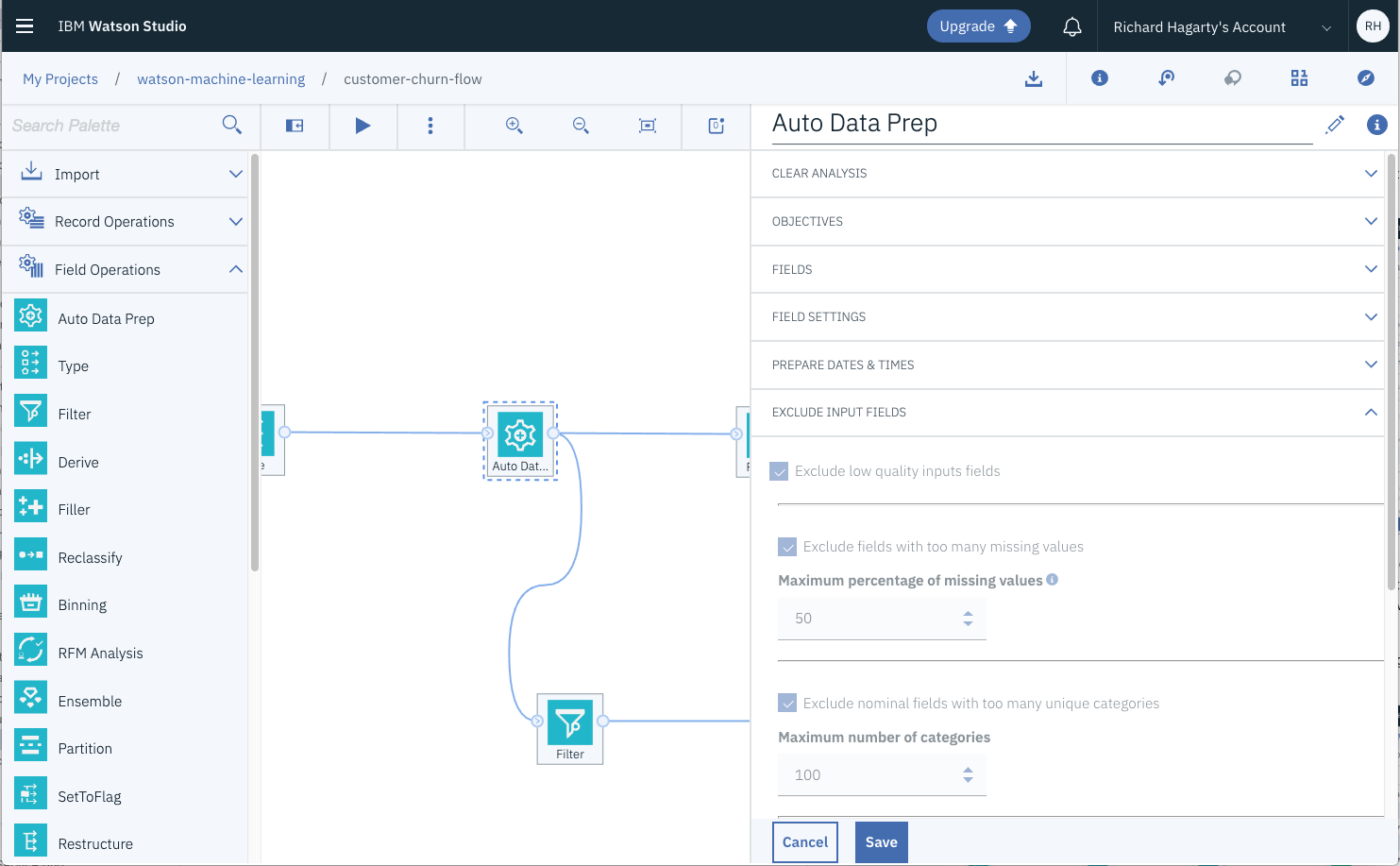 The next node in the pipeline is the Partition node, which splits the data set into a training set and a testing set. For the current Partition node, an 80-20 split has been used. 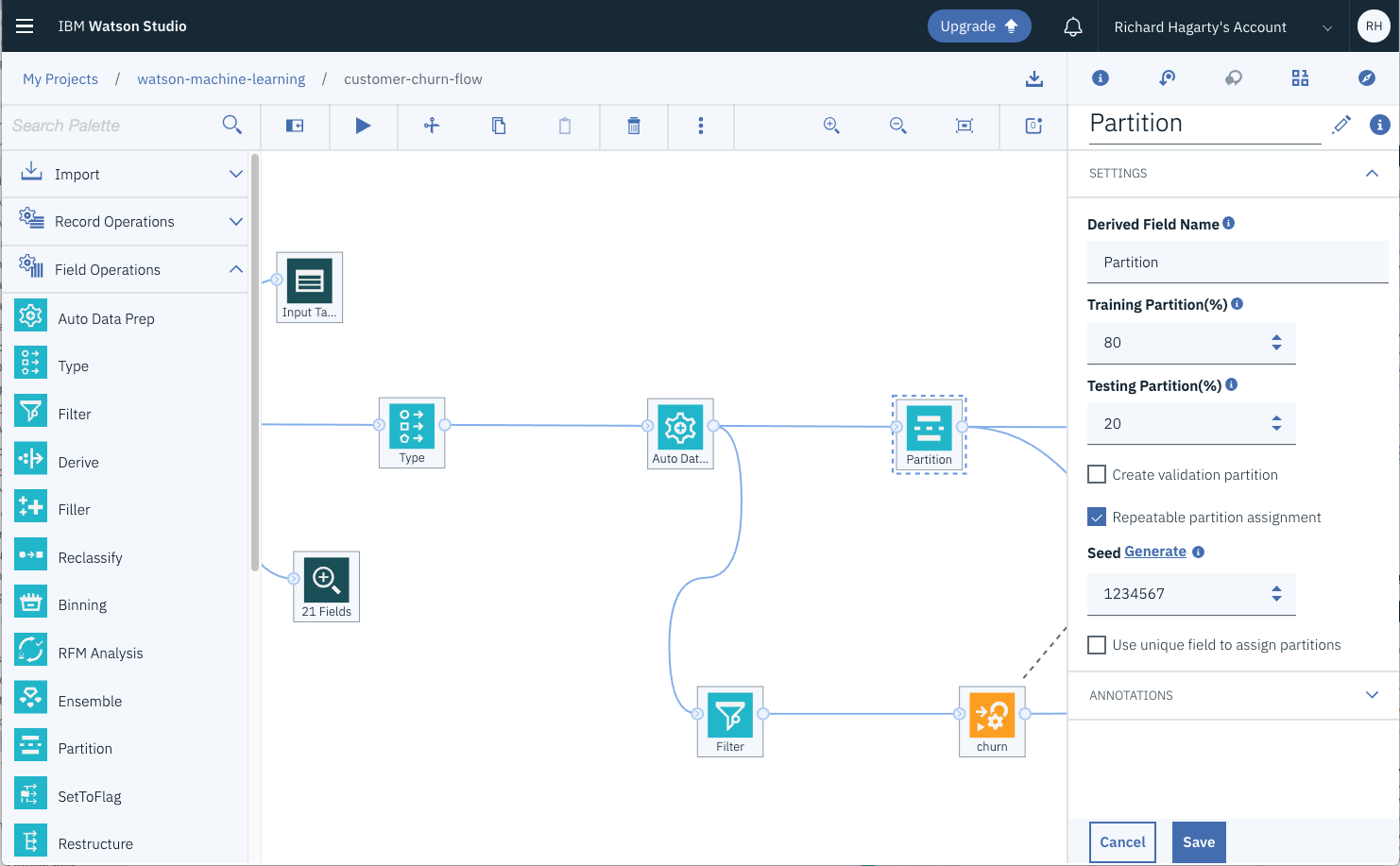 The next node in the SPSS Modeler flow is the Auto Classifier node named “churn.” This node trains the model based on various build options, such as how to rank and discard generated models (using threshold accuracy). 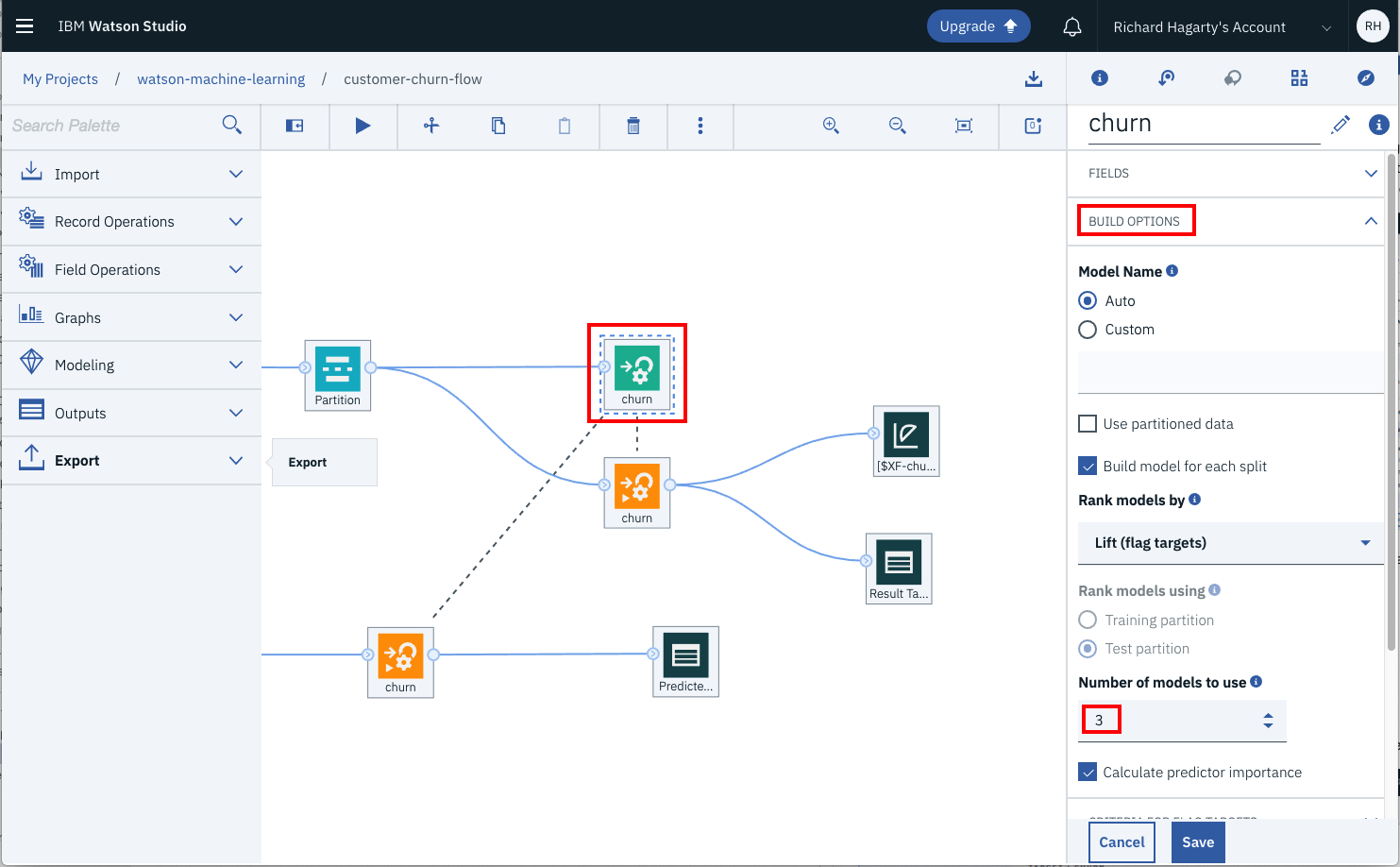 If you Open the node and select the BUILD OPTIONS option from the drop-down menu, you see the property Number of models to use is set to 3, which is the default value. Feel free to change it to a higher number, and then click Save to save the changes.

NOTE: Remember to rerun the flow if you change any build settings.

To get more details about the generated model:

This overview section gives you a list of classifier models and their accuracy. In this example, I set the Number of models to use to 10. 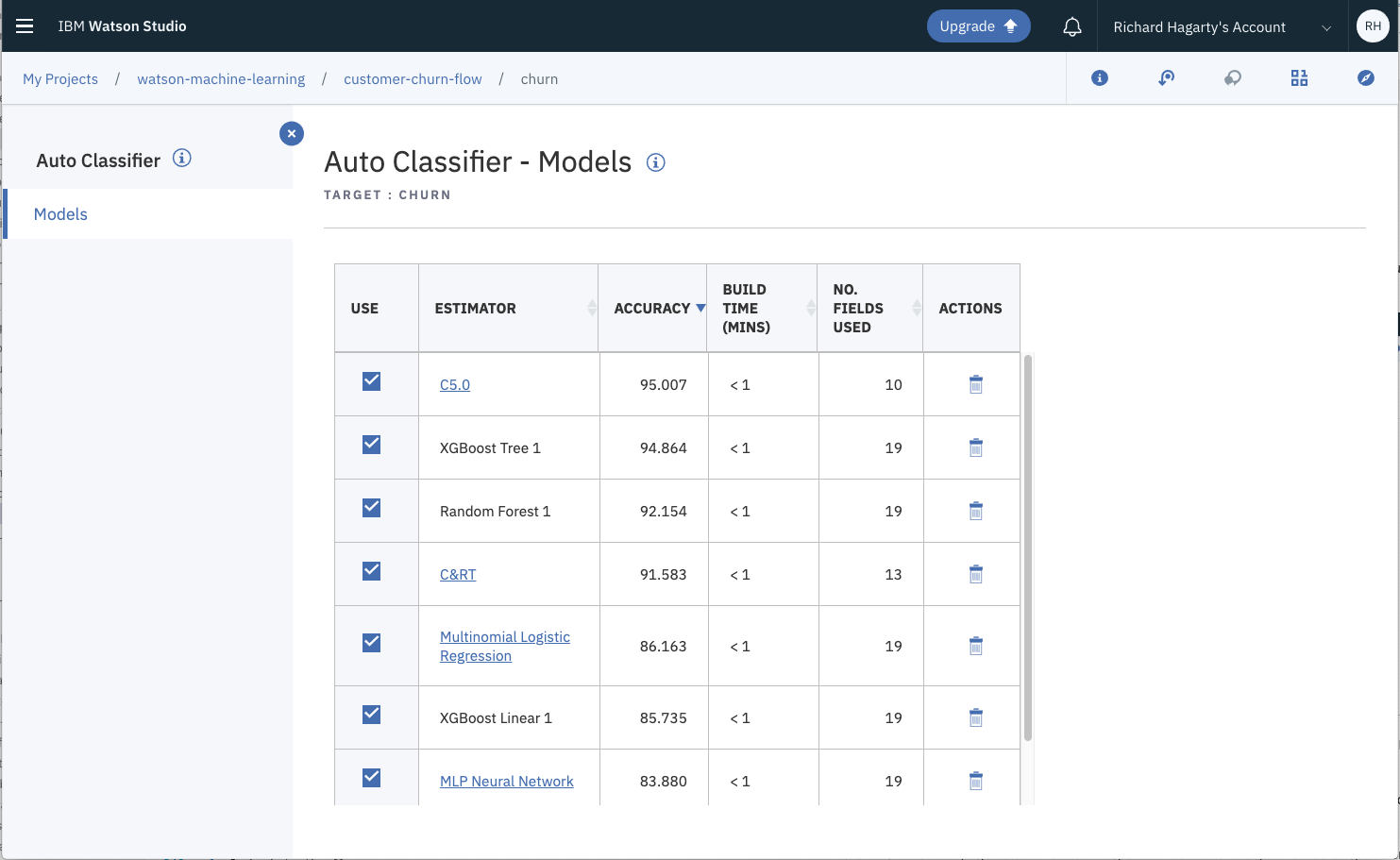 As you navigate through this overview section, you’ll notice that the number of options and views that are associated with each estimator varies. In some cases, a hyperlink is provided to dig down into more details.

For example, take a look at the poor performing ‘C&R’ Tree Model by clicking the name in the table.

On the next page, select the Tree Diagram link to the left to get the tree diagram for the estimator.

You can now hover over either one of the nodes or one of the branches in the tree to get more detailed information about a decision made at a given point. 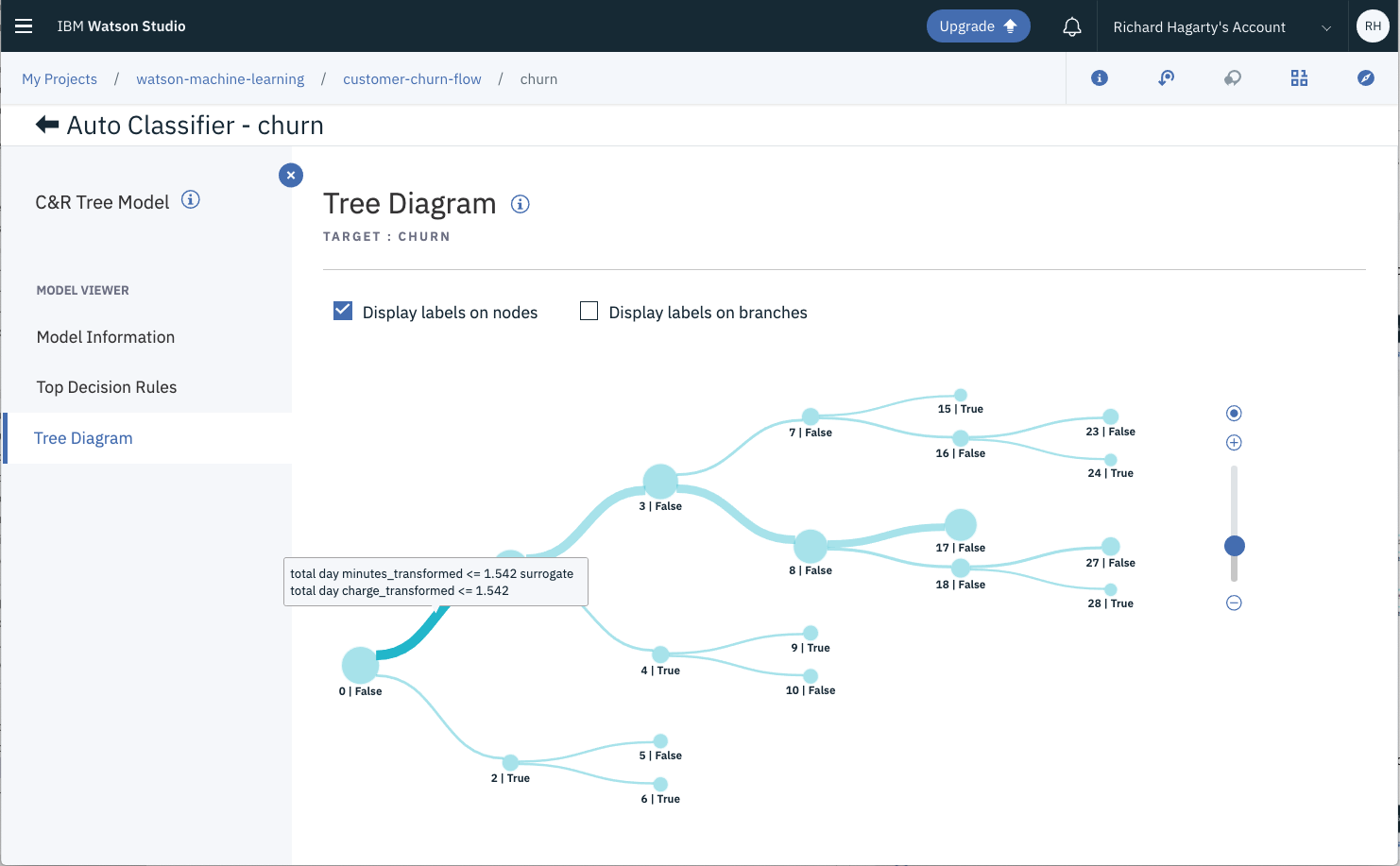 Go back by clicking the left arrow in the upper-left part of the page. Then, select the MPL Neural Network link to get the details for that estimator. Note that has different options than the tree model. 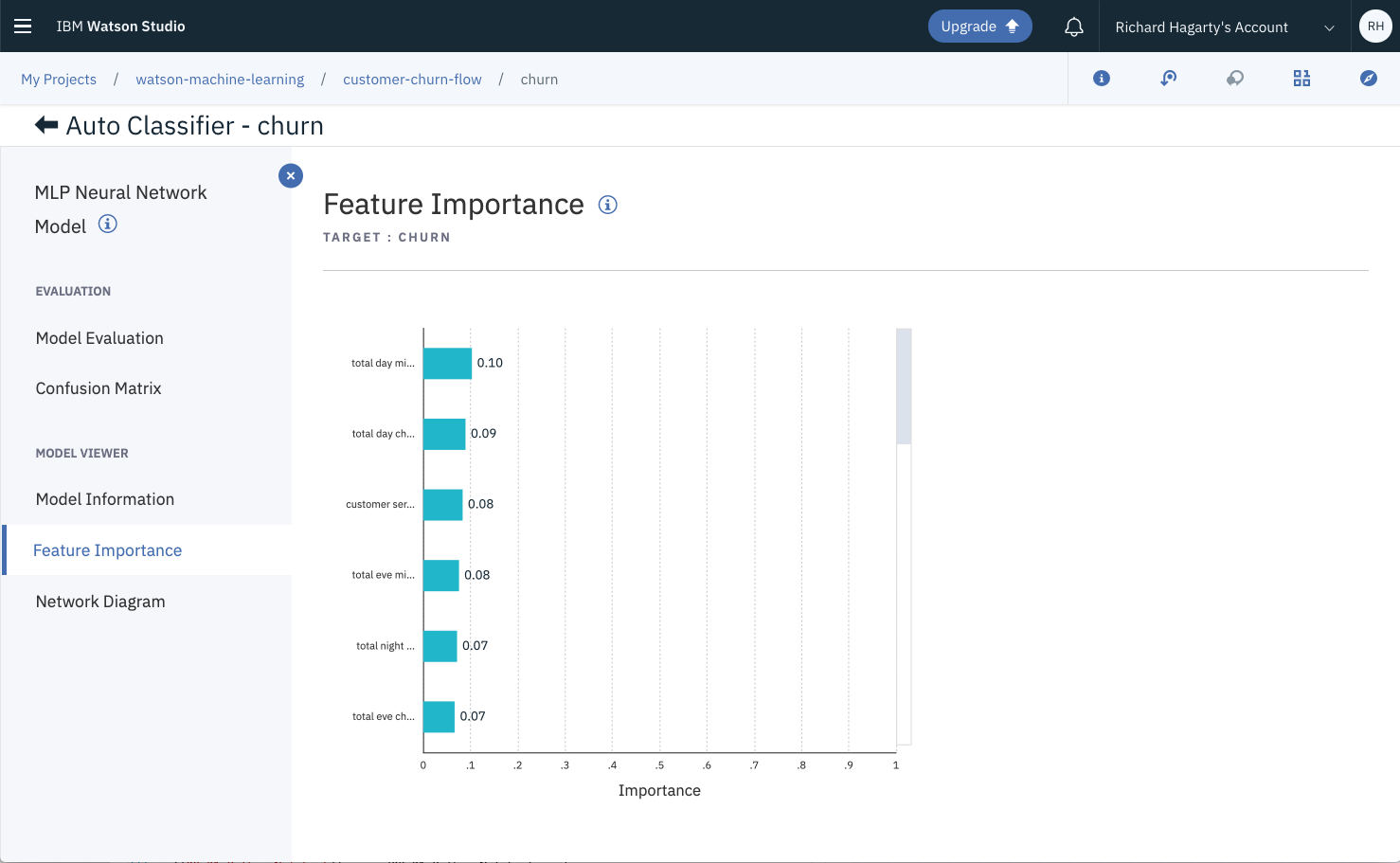 This graphs the relative performance of each predictor in estimating the model. 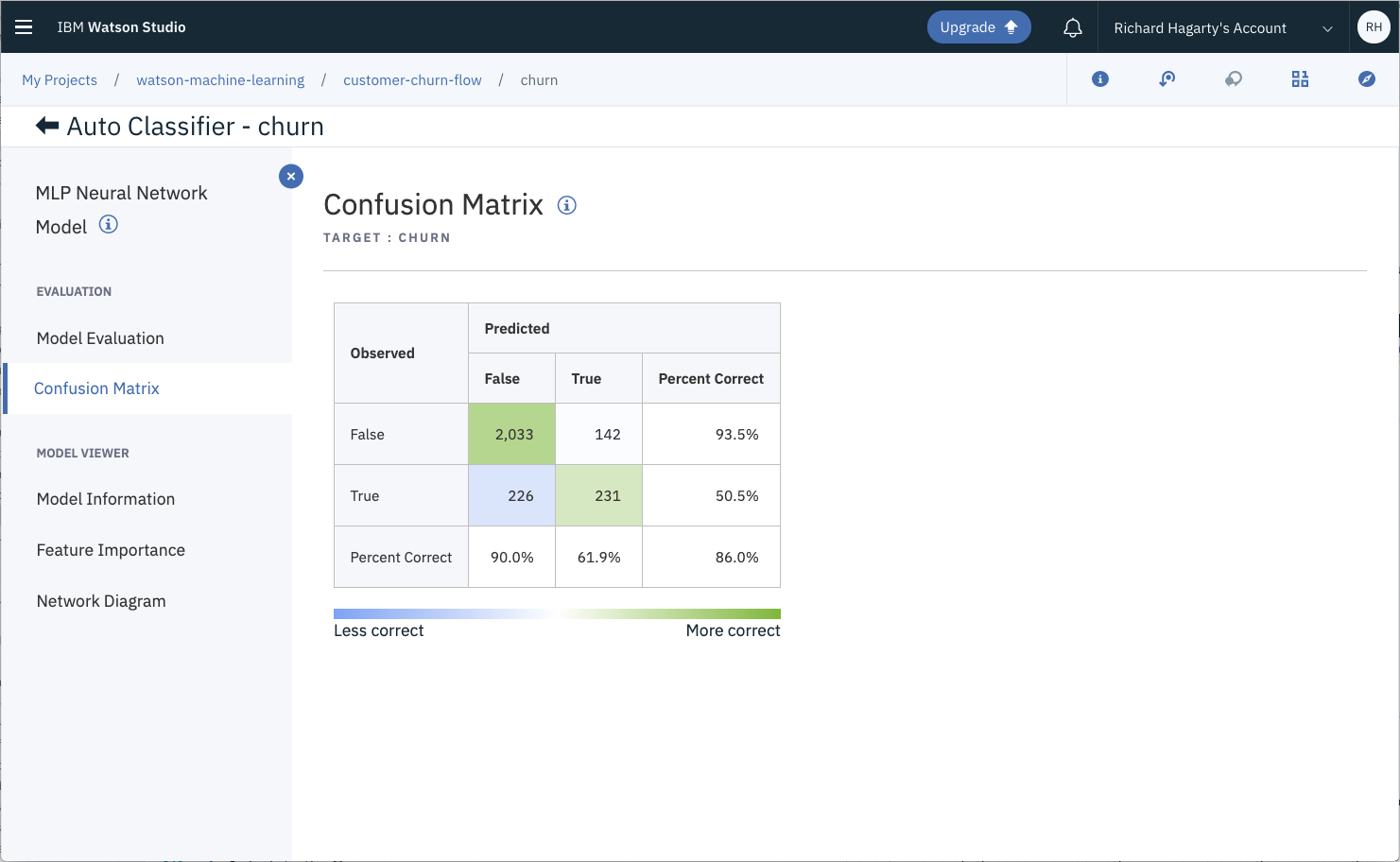 The table compares what is predicted versus what it observed. The numbers of correct predictions are shown in the cells along the main diagonal.

If you would like to get the confusion matrix for the complete data set, you can add a Matrix Output node to the canvas.

The main diagonal cell percentages contain the recall values as the row percentages (100 times the proportions metric that’s generally used) and the precision values as the column percentages. The F1 statistics and weighted versions of precision and recall over both categories would need to be manually calculated. The results shown are the combined results applying all three algorithms. If you want to see the results just for the Random Forest, go back to the Auto Classifier node. Open it and uncheck the boxes for all models other than Random Forest. Then, rerun the flow.

If you want to just get the confusion matrix, open the Matrix Output node and unselect ‘Percentage of Row’ and ‘Percentage of Column’ in the appearance section. Then, repeat steps 7-11 above.

A more graphical way of showing the confusion matrix can be achieved by using SPSS visualizations. For that purpose, you need to select the Result Table output node, then select the Profile option in the drop-down menu. 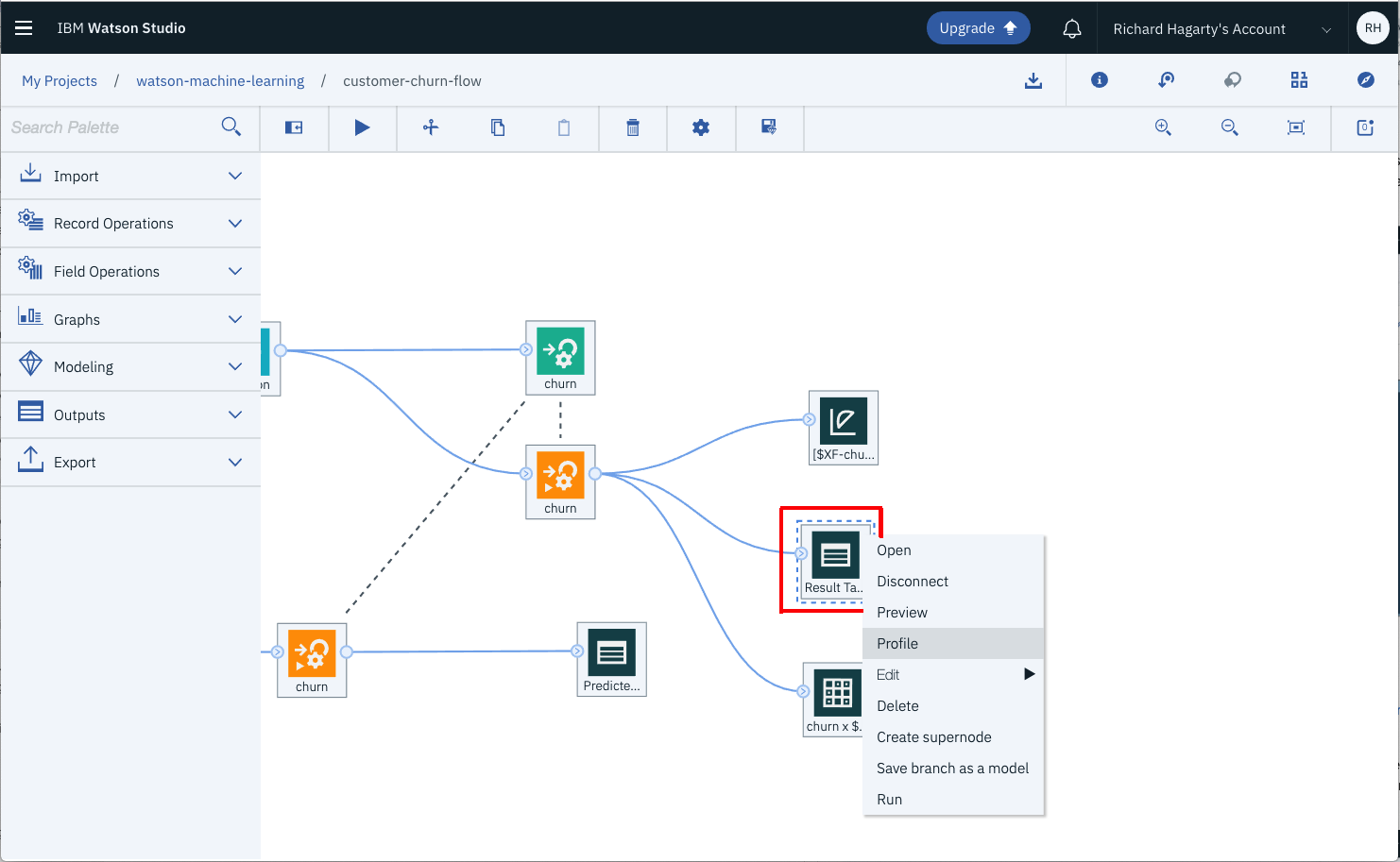 Click the Visualizations tab. Then, click more options (the double arrow icon) to view the types of charts available. Select the Treemap chart.

Set the Columns values to churn and $XF-churn, and select Count in the Summary. 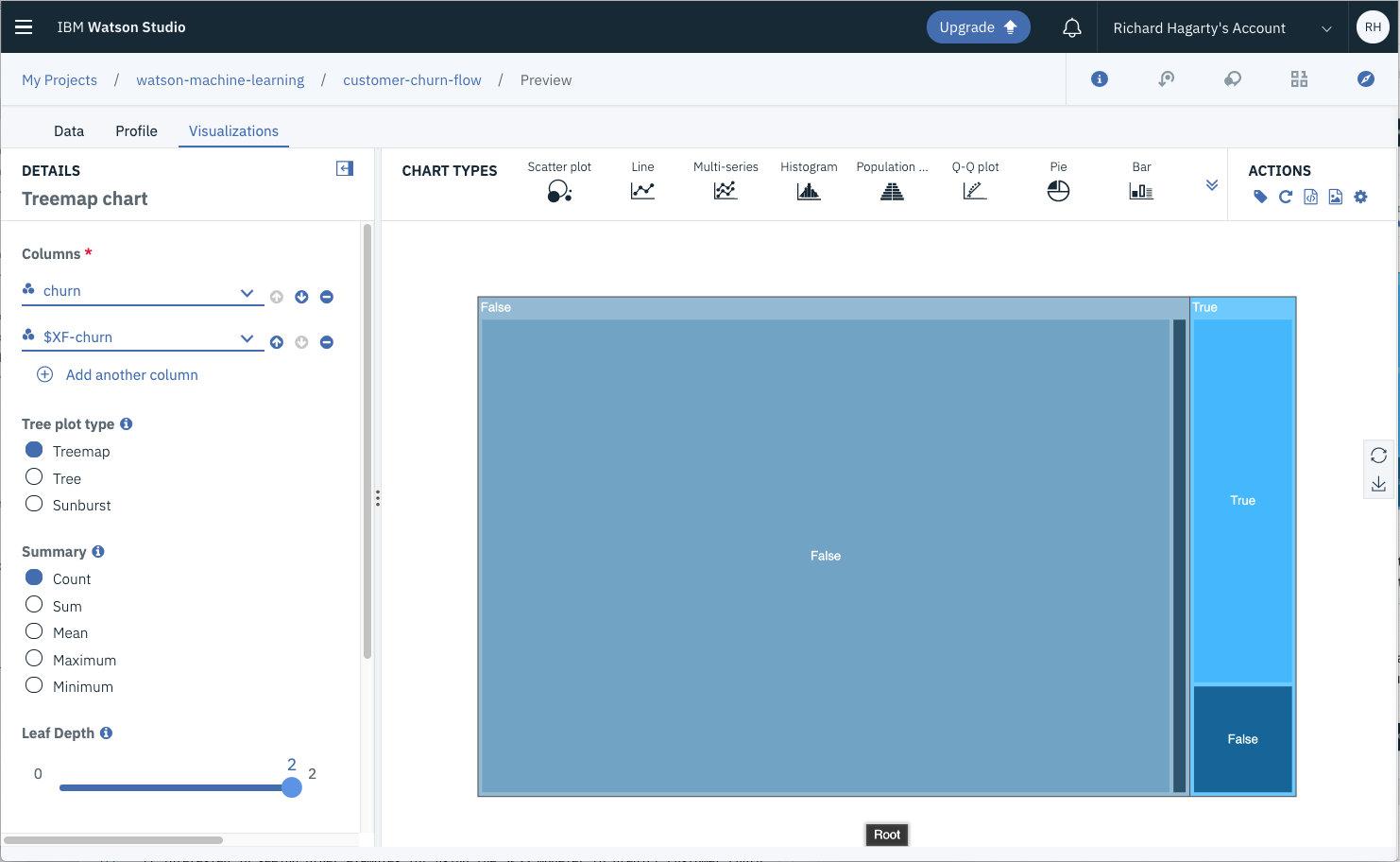 Notice that the current pipeline performs a simple split of test and training data using the Partition node. It’s also possible to use cross-validation and stratified cross-validation to achieve slightly better model performance, but at the cost of complicating the pipeline. See the article k-fold Cross-validation in IBM SPSS Modeler for details on how this can be achieved.

There are two more ways of viewing the results of the evaluation.

The generated outputs for the model appear. 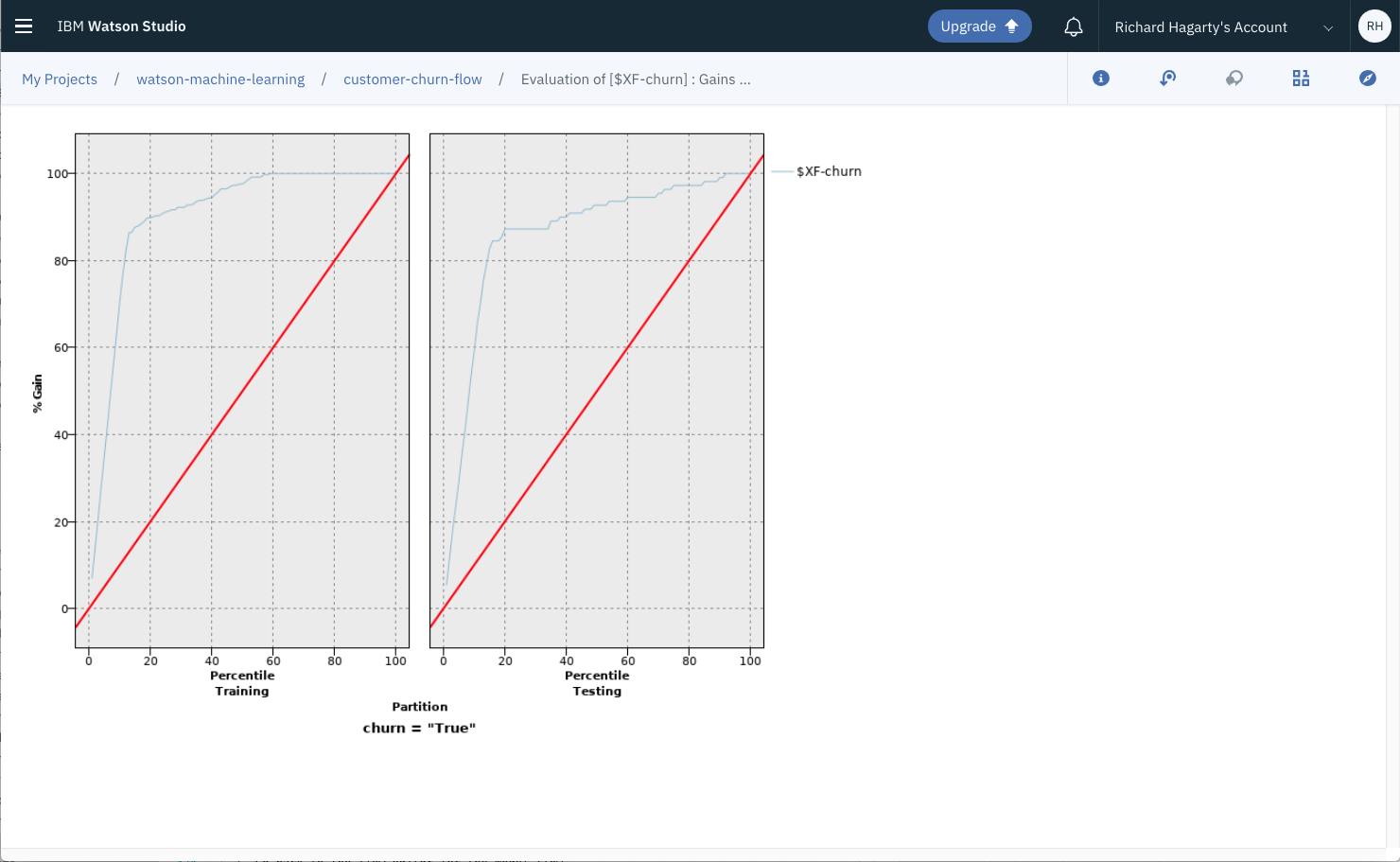 Saving and deploying the model

After you create, train, and evaluate a model, you can save and deploy it.

To save the SPSS model:

The model should now appear in the Models section of the Assets tab for the project. 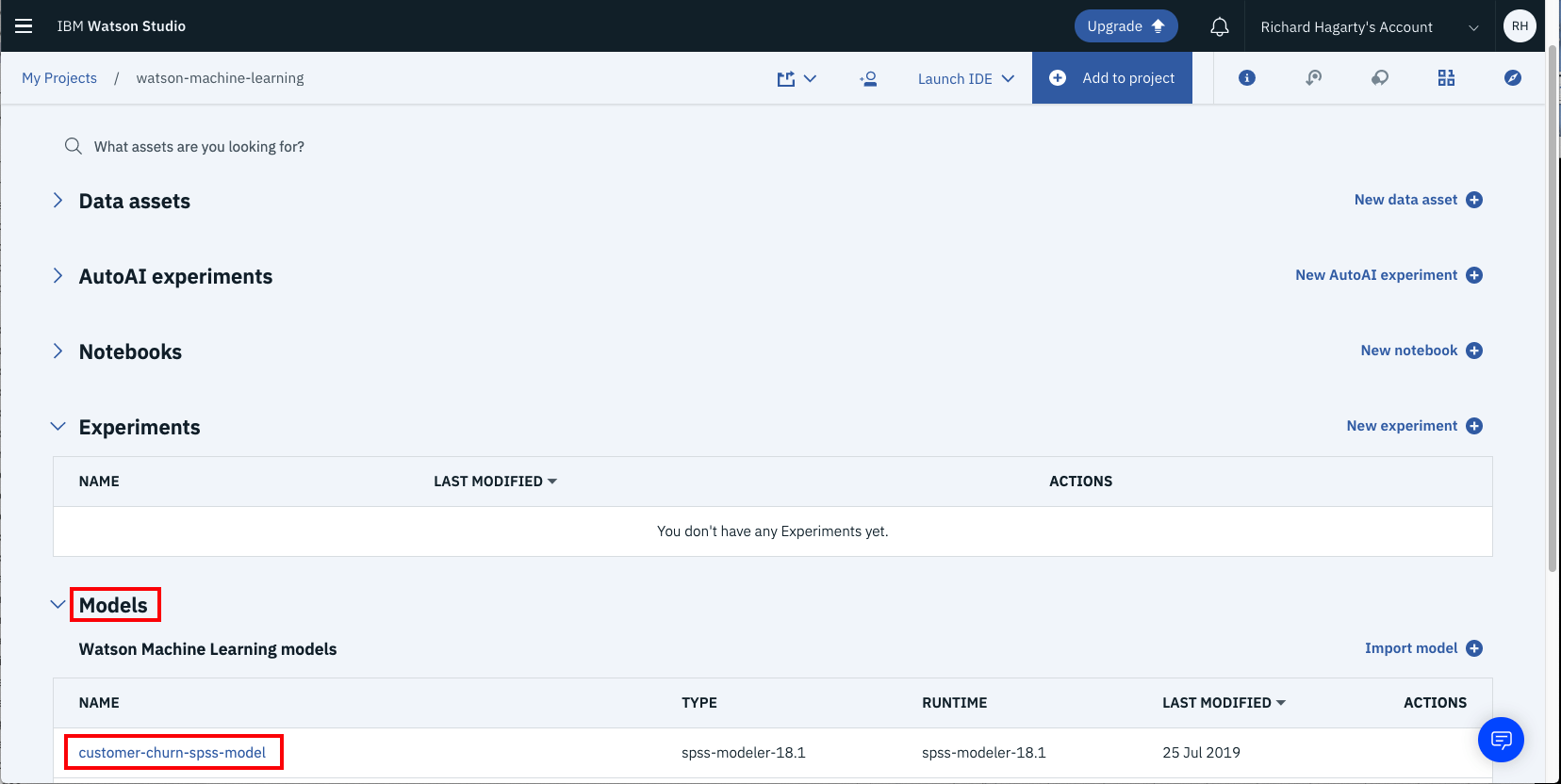 To deploy the SPSS model:

Now, the model is deployed and can be used for prediction. However, before using it in a production environment it might be worthwhile to test it using real data. You can do this interactively or programmatically using the API for the IBM Machine Learning Service. For now, we test it interactively.

The UI provides two options for testing the prediction: by entering the values one by one in distinct fields (one for each feature) or by specifying the feature values using a JSON object. We use the second option because it is the most convenient one when tests are performed more than once (which is usually the case), and when a large set of feature values is needed. To get a predefined test data set:

Notice that the JSON object defines the names of the fields first, followed by a sequence of observations to be predicted, each in the form of a sequence:

Note that some of the features, such as state and phone number, are expected to be in the form of strings (which should be no surprise), whereas the true numerical features can be provided as integers or floats as appropriate for the given feature.

To test the model at run time: 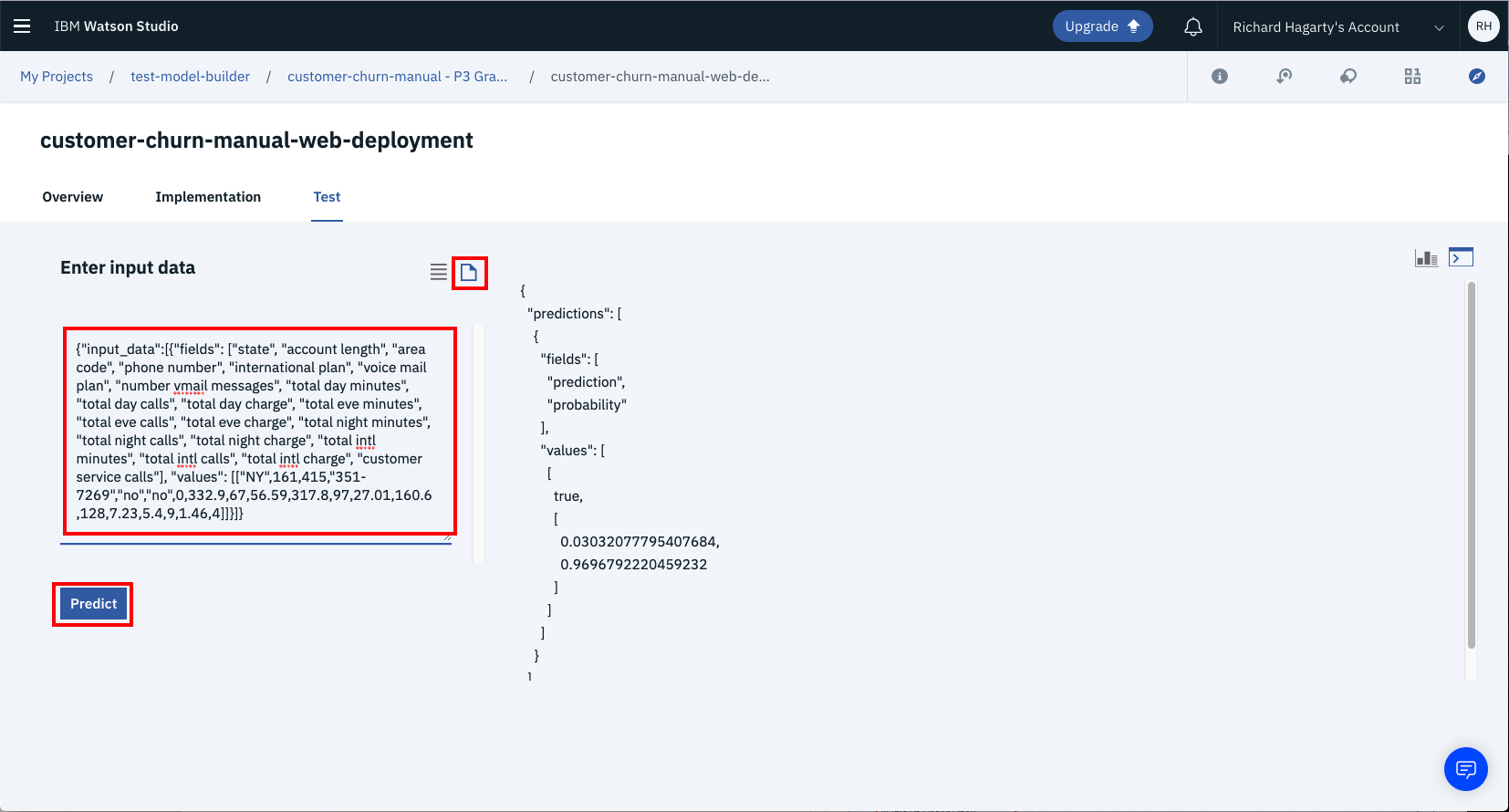 If interested in seeing other examples for using the SPSS Modeler to predict customer churn, look at the tutorial Predict Customer Churn by Building and Deploying Models Using Watson Studio Flows.

As mentioned previously, you can also access the model using the IBM Watson Machine Learning API. One way to do this is with a Jupyter Notebook, which is discussed in our next tutorial – Running Jupyter Notebooks in IBM Watson Studio.

After you have completed that tutorial and feel comfortable running Jupyter Notebooks, you can try out a sample notebook that will score the SPSS model you just created.

When creating the notebook, use the From URL option and enter:

To run the notebook, you will need to update it with:

This tutorial covered the basics of using the SPSS Modeler flow feature in Watson Studio, which included:

Using the SPSS Modeler flow feature of Watson Studio provides a non-programming approach to creating a model to predict customer churn. It provides an alternative to the fully programmed style of using a Jupyter Notebook, as described in the next learning path tutorial, Running Jupyter Notebooks in IBM Watson Studio.