A focus on hierarchical diagrams

A picture is worth a thousand words, and this is particularly true in regard to complex computer systems. As system environments become more complex, the importance of diagramming them and documenting them becomes even more important. For example, virtualization technologies have many benefits; however, they generally make the environment more complex and more difficult to understand. Graphviz is a flexible application that can create diagrams and is easily scriptable. This article covers the basics of the Graphviz DOT language and provides example scripts that can be used to diagram the Virtual I/O Server (VIOS) NPIV and VIOS VSCSI architectures of an IBM POWER processor-based server. This article helps you understand the basics of Graphviz and how to start writing scripts to automate creating diagrams.

There are multiple tools available in the Graphviz application to produce different types of diagrams (dot, neato, circo, twopi, and so on.) This article focuses on the dot tool which produces hierarchical diagrams.

Basics of the DOT language

After installing Graphviz, you can start creating the diagrams with the tool by creating a DOT file. The DOT file is a text file that describes the elements of a diagram and their relationship so that the tool can produce a graphical representation of this.

Listing 2. Generating an image from the DOT file

The image produced by the DOT file in listing 1 is shown in Figure 1.

The first example (example1.dot) described an undirected graph, which is a graph that shows connections between nodes without arrows on the lines.

Listing 3 and Figure 2 show the DOT file and graph, respectively, of a directed graph.

You can also easily control the shape, color, and label of each node in your graph. This is done by listing each node name, followed by brackets containing the options. For example, the line Server1 [shape=box, label="Server1\nWeb Server", fillcolor="#ABACBA", style=filled] defines that the Server1 node should have a box shape, have a label of Server1\nWeb Server (the \n represents a new line), have the color set to the hexadecimal (hex) color #ABACBA, and the color should fill the node.

Building upon the previous examples, Listing 4 and Figure 3 show how to define these extra attributes on the diagram. 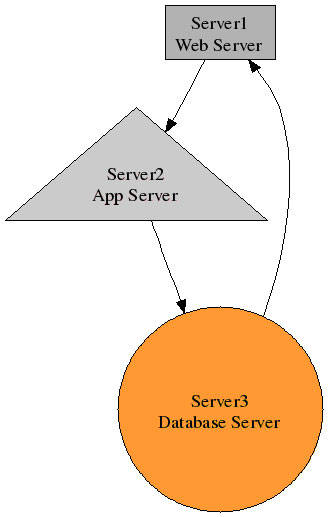 The first example in Listing 5 is a bash shell script that connects to a Hardware Management Console (HMC) and gathers information about the managed servers and logical partitions (LPARs) and creates a DOT output with this information.

This script requires that you have Secure Shell (SSH) key authentication setup between the server on which you are running the script and your HMC.

Listing 6 shows the output of the script.

You can easily generate the graph from the script by running the following command: ./hmc_to_dot.sh hmc_server_name | dot -Tpng -o hmc_graph.png

This runs the script that dynamically creates the DOT language and then pipes this output to the dot command which in turn creates the diagram as a file named, hmc_graph.png. Figure 4 shows the diagram created.

The following two scripts show some of the possibilities of using scripts to dynamically create diagrams. Both of these are Perl scripts and their output can be piped to the dot command to generate the diagrams.

These two scripts require that you have the SSH key authentication setup between the server on which you are running the script and your HMC. The scripts are designed to work with the systems that have a single VIOS or dual Virtual I/O Servers, and depending on your environment, they might need to be tweaked.

The first script gathers information from the HMC and Virtual I/O Servers in order to dynamically create a diagram of the NPIV architecture in an IBM PowerVM® environment. This NPIV architecture diagram makes it very easy to see how physical host bus adapters (HBAs) are mapped through to virtual HBAs and LPARs. This script is run with the HMC name as the first parameter and the managed system name as the second parameter.

Scripts such as these can be run through cron daily so that you have self-documenting diagrams that are accurate and up-to-date. 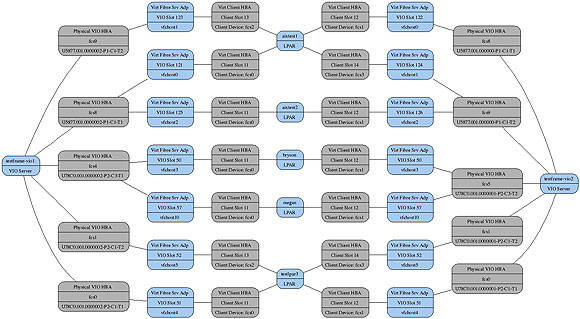 The final example script gathers information from the HMC and Virtual I/O Servers and produces a diagram of the VSCSI adapter mappings in a PowerVM environment. This script is run with the HMC name as the first parameter and the managed system name as the second parameter.

With today’s dynamic environment of virtualization, systems are constantly changing and it is difficult to manually keep documentation and diagrams up-to-date and accurate. This article has presented the basics of Graphviz and how to write scripts that harness the power of Graphviz to create up-to-date, accurate, and automated diagrams of your environment. You can run these scripts from cron and place the diagrams on a web server so that your diagrams are re-created as often as you would require and are easily accessible through a web browser.

The perzl.org website has AIX binaries of Graphviz available.