Linux on POWER (LoP) was introduced in 2005 with the introduction of Advanced Power Virtualization (APV) and IBM System p5®. Its introduction allowed users of the IBM System p architecture to install Linux natively on top of IBM’s logical partitioning (LPAR) technology. In doing so, it provided users with the ability to use virtualization features on System p, similar to what they could do with IBM’s brand of UNIX®: AIX®. These features included micro-partitioning, Virtual IO Servers (VIOS) and supported advanced-level features, such as Capacity on Demand (CoD). It even is supported by newer innovations available on the Power6, such as Live Partition Mobility, which allows workloads to be dynamically moved from one System p server to another with no downtime; and shared dedicated capacity, which optimizes the use of spare processor cycles.

Finally, we should note that users of LoP should be aware of a new innovation brought in by PowerVM. Formerly referred to as System p AVE, it has since been renamed PowerVM™ Lx86. PowerVM Lx86 supports the installation and running of most 32-bit x86 Linux applications on any System p or BladeCenter® model with POWER6™, POWER5+™, or POWER5™ processors, without a native installation of the application. It works by creating an x86 Linux application environment running on POWER™ processor-based systems by dynamically translating x86 instructions to Power Architecture® instructions and caching them to enhance performance. It also maps x86 Linux system calls to Linux on POWER system calls. What is unique about this solution is that no native porting or application upgrade is required for running most x86 Linux applications. This is supported by both SLES and RHEL.

But aren’t both Red Hat’s and Novell’s distributions supported on IBM System p? The short answer is yes. But there are some fundamental differences between them that you should be aware of. As a project manager presently involved in a multimillion-dollar project moving from one Linux distribution to another, I can attest to the importance of this decision. Some of these factors include how important a GUI is to you, what kind of support you can expect to receive from your distribution vendors, and the respective market share of each distribution. To help you in you decision, you’ll see what’s involved in managing volume groups and allocating physical volumes to your logical environments.

What is it about SUSE that sets it apart? In my view, it starts with Yet another Setup Tool (YaST, or YaST2) . YaST is similar to smit on AIX, and it can pretty much perform and systems administration task. Let’s work with logical volumes, which will allow you to work with physical devices and file systems, as well.

First, we’ll call up the GUI using the # yast. This calls up the YaST Control Center shown below. 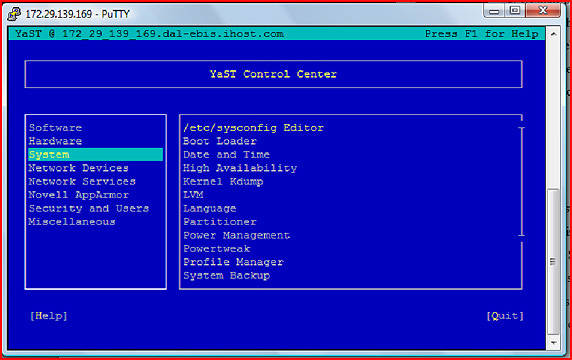 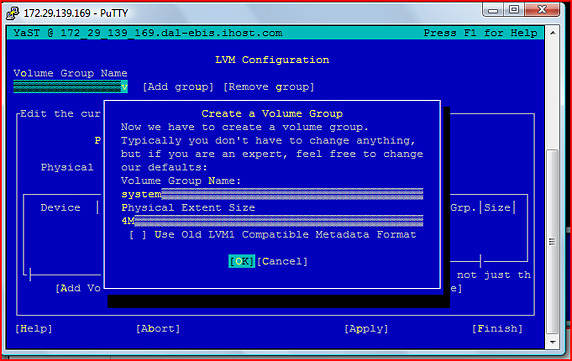 The volume group you are adding is oravg. You’ll also allocate physical device /dev/sdb to this volume group. 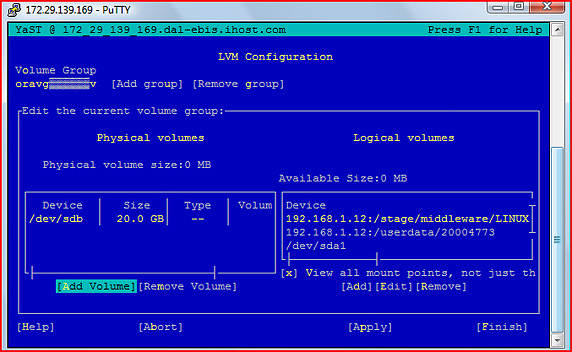 When that is completed, you’ll see the physical volume size increase; in our case, it increases to 19.9 GB. Now we’re ready to add the logical volume. Choose Add. 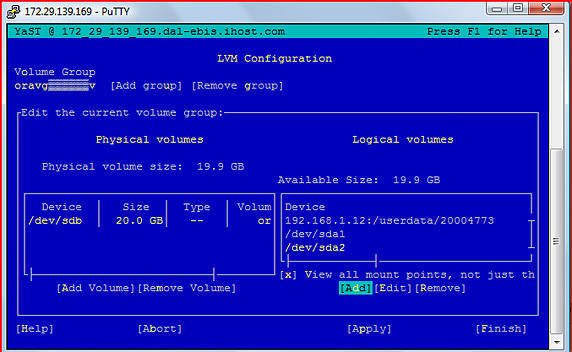 In Figure 5, you’ll input the name of the logical volume, oralv, and request a size of 4.9GB. You’ll also add the mount point, /ora01, which also creates the file system.

Figure 5. Inputting the name of the logical volume 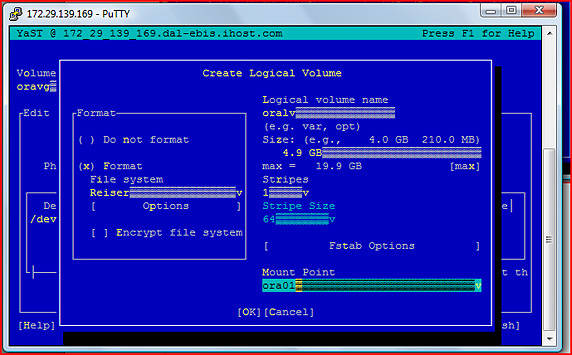 Figure 6 shows that the volume was created successfully.

Figure 6. The volume was created successfully 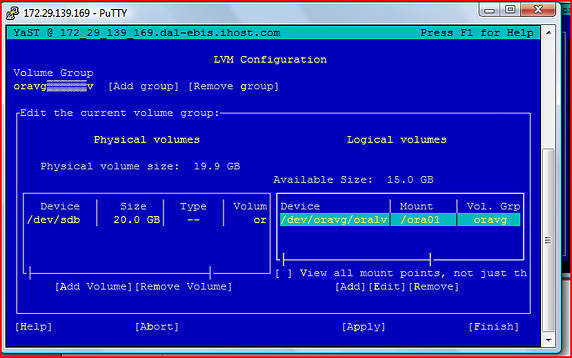 The command line verifies that the volume was created successfully. 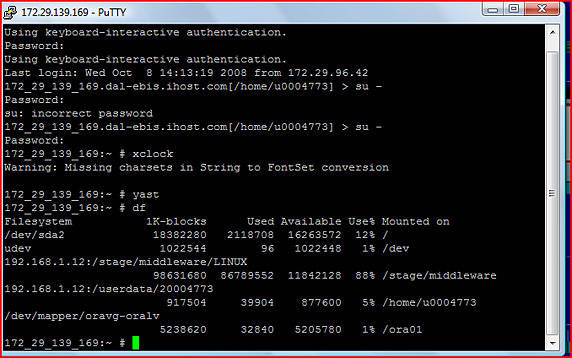 In this section, we’ll discuss Red Hat’s distribution on IBM System p. Red Hat offers support on the IBM System p starting with RHEL4. RHEL5 is also supported. So without IBM support of the version , functionality, such as PowerVM™, IBM’s virtualization engine, will just not work.

Red Hat V1 was released in November 1994 and was actually the first Linux to use the RPM Package Manager. RHEL was introduced in 2003, with the last of the Red Hat Linux versions, V9, released in April 2004. Unquestionably, Red Hat has been the Linux market leader through the years, particularly for big business.

What you won’t find with RHEL is an integrated GUI-like YaST2, from which you can launch any command that your heart desires. With Red Hat, you have GUIs, but you need to remember the names of the commands that launch them; there is not one command from which it all flows as there is with SLES. To add logical volumes, you’ll use the system-config-lvm command. The first thing you’ll need to do prior to setting up our volume group is initialize your unpartitioned space (see Figure 8), which, here, is 20 GB: # system-config-lvm.

In this case, you’ll call the volume group oraclevg and allocate 256 4 mg extents. Click OK when the action is completed. 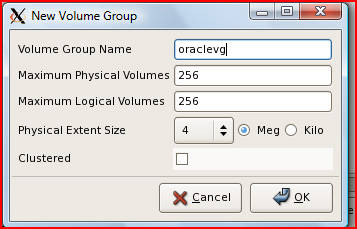 At this point, click on logical view to create a logical volume. 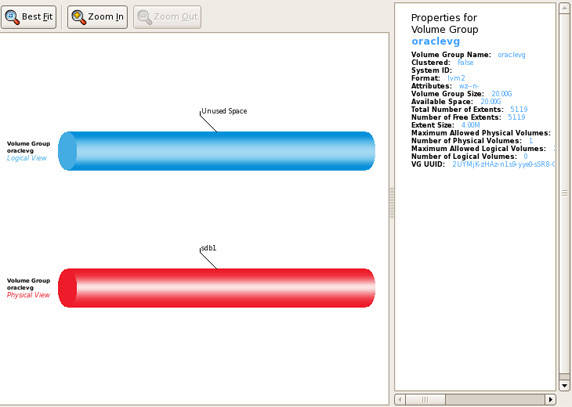 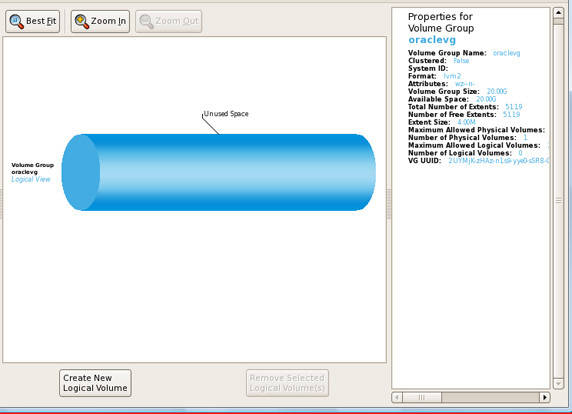 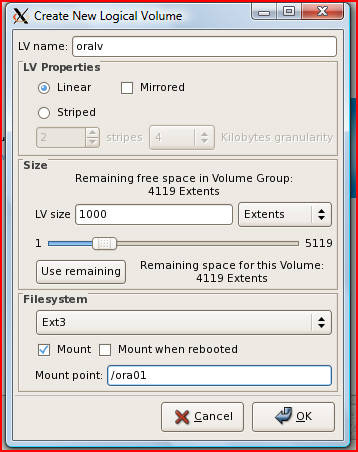 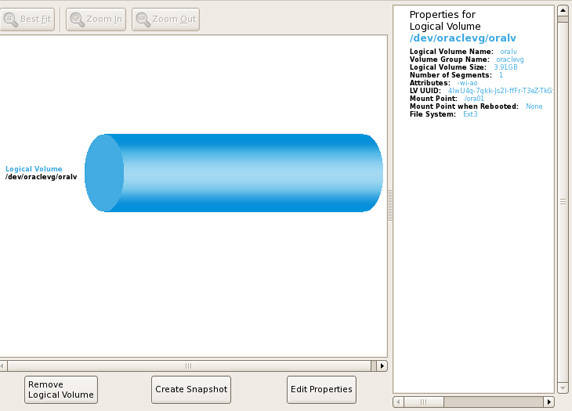 Before we compare and contrast the two distributions, make sure you download all the required software that will enable you to access the full capabilities of your operating system, including the ability to enable dynamic logical partitioning on your Linux partition. See Related topics for a complete list of SLES packages you should download for System p servers that are not managed by a Hardware Management Console (HMC). These packages are provided from IBM in RPM format. After installing these packages, the dynamic reconfiguration of CPU and hot-pluggable PCI adapters can also be performed without having to reboot Linux.

One important innovation exclusive to Novell is its integrated stack for SUSE Linux Enterprise, first made available on IBM System p5® and BladeCenter JS21. This consists of the IBM WebSphere® application server, IBM DB2®, SLES10, and Centeris Likewise Management. This management tool allows you to manage a network of Linux and Windows servers. The stack is bundled on one DVD and available from all Novell business partners. This product is an end-to-end Web-enabled environment, which is as powerful as it is integrated. This is intended for clients with custom Web-based or Java applications who are looking to modernize their infrastructure with a mix of supported and open source applications. It is also fully supported by IBM’s midrange virtualization product, IBM’s PowerVM. On the RHEL side, Red Hat has its own application stack. This stack is an integrated version of RHEL4 that includes JBoss and Apache. The RHEL stack, however, does not have the same level of System p support the SLES stack does.

What about RHEL? Red Hat owns the market share for Linux and has for many years, which is something to consider. I have a preference for some of the RHEL GUI tools over YaST — in particular, the one we looked at in this article — to configure logical volumes. The GUI is easy on the eyes and intuitive.

As someone who has used both SLES and RHEL, I’m not prepared to say I prefer one or the other on IBM System p. They both have great support and are top performers. It’s also important to note that both Red Hat and Novell service and support the Linux on POWER configurations. Make sure you visit IBM’s Linux on POWER Service and Productivity Tools Support Forum (see Related topics), where you can collaborate with others using these systems.

In this article, we looked at the top Linux distributions on IBM’s System p: RHEL and SLES. The history of Linux on POWER (LoP) and the histories of the leading distributions were also detailed. You’ve seen firsthand how to set up the logical volumes on each distribution. In doing so, you used the GUI of each distribution to perform some configurations. RHEL or SLES? The bottom line is you can’t go wrong with either.