Containers interoperability: How compatible is portable?

Containers are not as interoperable as you may think in a hybrid, multicloud setting, unless multiple dimensions are well understood and planned

Containers are not as interoperable as you would think unless multiple dimensions of containers interoperability are well understood and planned in a hybrid multicloud ecosystem. In this article, I am specifically talking about hybrid, multicloud environments where a containerized application should be interoperable across various landing zones as a requirement.

If you develop or maintain containerized applications and have experience running container images, you might believe that anything will just work, all of the time. Containers are often thought to be completely portable across time and space. A lot of the time, they do work! That is true only until they don’t. The reasons why are the 7 dimensions that I share here.

However, before I get into the technical aspects, I would like to clarify the concepts with a simple philosophy.

If you are not a containers expert, the following description will help you understand portability, compatibility, and supportability in the given context. Look at the shapes in the following diagram. 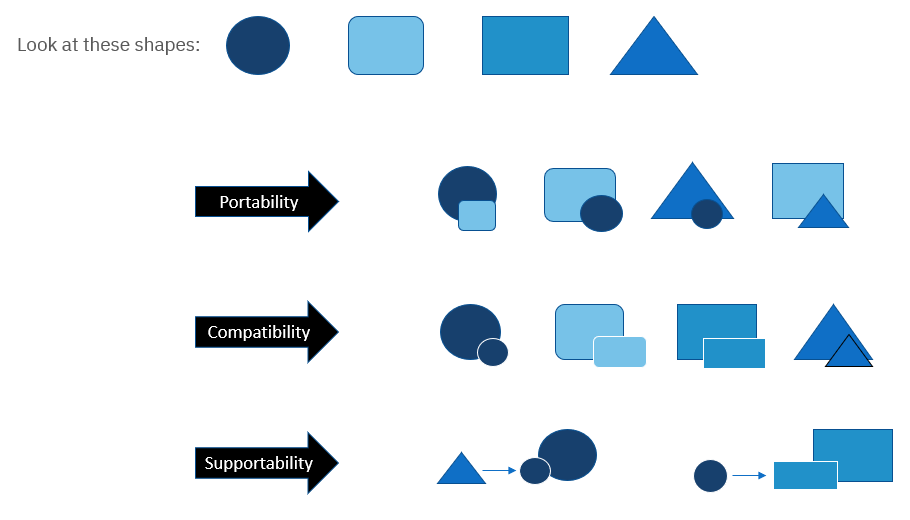 There is a circle, a square with curved edges, a rectangle, and a triangle. Portability can be defined when you try to fit any one shape into another shape. For example, by fitting the square into the circle, or the circle into the square, and so on. Compatibility occurs only when the same shape is fit into the same shape. For example, by fitting a small circle inside a big circle, a square into a square, and so on. However, if you try to make a triangle compatible with a circle, you must make certain fundamental changes to the triangle to transform it into a circle and then you can fit it into a bigger circle. This is called supportability. Either you do it yourself or a vendor brings the relevant skills to make it happen. The same philosophy applies to containers. 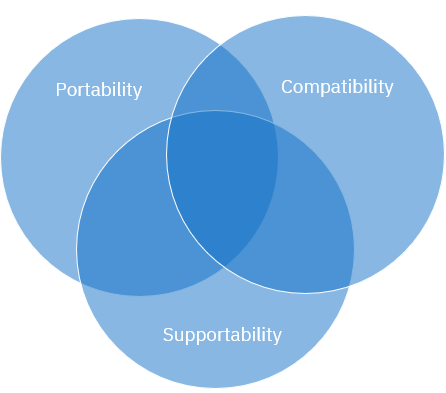 Portability refers to an OCI standard governs that a container image can be consumed by almost any container engine including CRI-O, Docker, rkt, containerd, and other Podman instances. They govern the following:

Compatibility addresses the content inside the container image. Containers do not offer a compatibility guarantee. This compatibility extends to the processor architecture and versions of the operating system. Here are some examples:

Supportability is what vendors can provide. This is about investing in testing, patching, security, performance, and architecture, as well as ensuring that images and binaries are built in a way that they run correctly on a given set of container hosts (such as processor, operating system, and kernel version).

Although, no vendor can guarantee that every permutation of a Linux container image and host combination on the planet will work at a given point in time and space, for example. It would expand the testing and analysis matrix at a non-linear growth rate.

Now that these concepts are clear. Let us dig much deeper into the technology. 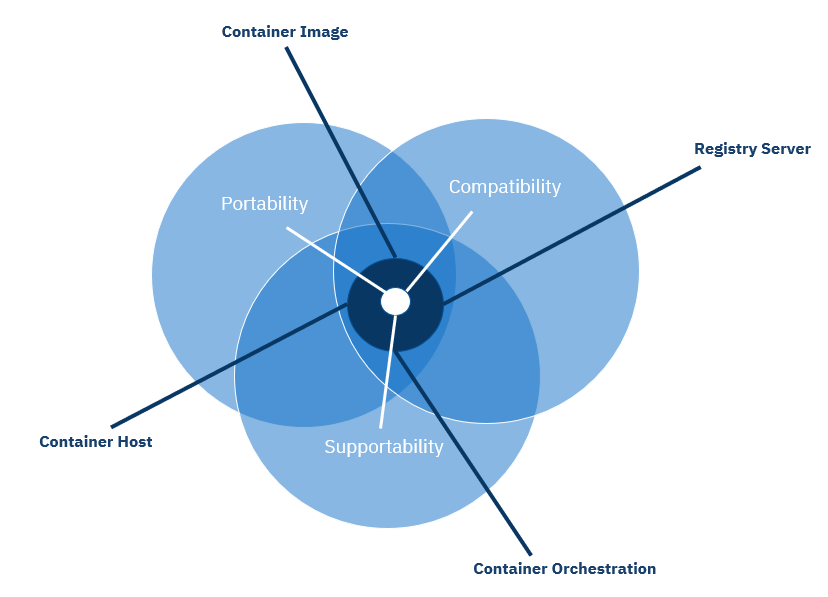 These are the components that any developer or application owner should think about for production-readiness with respect to containers. At least, in the given context of portability, compatibility, and supportability depending upon the landing zone or target environment. This becomes more crucial when you plan to move or migrate your containerized applications from one environment to another.

Base images are built from the same utilities and libraries included in an operating system.

Advanced application images already include extra software. Examples include language runtimes, databases, middleware, storage, and independent software vendor (ISV) software. Software included in these images is tested, preconfigured, and certified to work immediately. These prebuilt images make it easy to deploy multitier applications from existing components without the work of building your own application images.

Problems can occur if the container host and container image version are mismatched. The larger the version mismatch between a user space and the kernel, the more likely there will be incompatibilities. 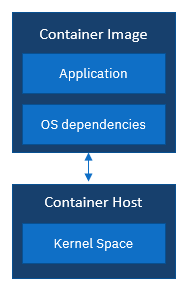 Container images are made up of layers, such as libraries, binaries, packages, dependency management, repositories, image layer, and tags.

The portability of Linux containers is not absolute. Using different operating system distributions or widely differing versions of the same Linux distribution can lead to problems.

There are a few best practices in hybrid multicloud environments (multiple landing zones) as follows:

There are different types of container engines with runc as a runtime, such as Podman, CRI-O, and dockerd, as shown in the following diagram.

The Docker daemon or CRI-O, for example, is one of the many user space tools and libraries that talk to the kernel to set up containers. They do the following at least:

Further, the kernel or OS at least creates Linux processes.

Normal processes are created, destroyed, and managed with system calls:

Containers are not of much benefit if they are not orchestrated. They work with orchestration software to provide several advantages. It can perform some of the following tasks:

What else does Container orchestration and Kubernetes need? This is all about Kubernetes. It needs the following:

If you have multiple clusters in a hybrid multicloud landscape, it is useful to have a common Kubernetes version across them. Remember that every new version (mostly) deprecates some APIs and it may impact your pre-existing deployments, objects, services, and so on depending upon the Kubernetes version if you want to move your containerized application from one place to another.

As mentioned earlier, a registry server may not contribute directly to the interoperability, but having an integrated, or common, registry makes it easier to some extent. This component follows certain key principles, such as trust is temporal, even good images go bad over time because the world changes around them, and images must be constantly rebuilt to maintain a score of health index A (A to F depends upon security vulnerabilities affecting the number of packages). It also provides a REST API, downloads a trusted thing, downloads from a trusted source, and map layers, such as a local cache maps each layer to a volume or filesystem layer. For example, filesystem and container engine drivers, device mapper volumes, and container engine drivers.

A common registry can be a good use case if common images must be pushed across a hybrid multicloud environment.

All the previous factors I mentioned should become part of your careful planning and analysis in a hybrid multicloud environment (for the same containerized application, keep movement in mind from one landing zone to another). Now, let us look at a scenario for Linux container images (L-CI) as shown in the following diagram:

Each cloud platform in the diagram (Cloud x, Cloud y, and Cloud z) has its own container host OS and may be a different container orchestration version. With any potential movement (from or to) in mind, two questions must be considered:

In the diagram, each landing zone or target environment, such as AWS, IBM Cloud, Microsoft Azure, Google Cloud, private cloud, and VMware Cloud have a similar Kubernetes platform, which is Red Hat OpenShift Container Platform with a common certified container orchestration (Kubernetes) version, common container host (RHEL), and common registry (integrated). Thus, the same container images and applications will work across them if you plan to move or migrate later, or plan for a hybrid multicloud containerized solution. Any movement (from or to) guarantees portability, compatibility, and supportability. Note that OpenShift can run on more landing zones and target environments.

This is why I say “build once and deploy anywhere” with a true hybrid multicloud container strategy when OpenShift is your container platform.

Some basic web applications are the simple use cases in the containerized world and may not require the burden of all of the aspects explained in this article. However, when you have complex workloads or applications types, particularly in hybrid multicloud environments, at least remember to consider the following factors: container images, container host OS, container host hardware (such as x86), containers host OS version, and Kubernetes version.

To learn more about containers and container orchestration tools, visit the get started with containers resources page and read the OpenShift 101 series.

OpenShift Virtualization 2.4: A declarative coexistence of virtual machines and containers

OpenShift vs. Kubernetes for developers