Learn the basics of the Watson Assistant Service

With IBM Watson Assistant, you can build conversational interfaces into any application, device, or channel. Most virtual assistants try to mimic human interactions, but Watson Assistant is more. Watson Assistant knows when to search for an answer from a knowledge base, when to ask for clarity, and when to direct you to a human. The following video gives a high-level overview of the Watson Assistant service.

This article gives you an introduction to Watson Assistant. It provides an overview of the service, and explains its architecture as well as it terms and concepts.

Why use Watson Assistant?

Virtual assistants, or chatbots, go far beyond the gimmicky approach that they are often associated with. You can use bots to set appointments, call a car, and so on. It’s not a replacement for search. Amazon Echo and Google Home are excellent examples of virtual assistants. There is no interface, so having a well-structured dialog to talk through is essential.

The following figure shows Watson Assistant architecture that’s common for all implementations. In this architecture: 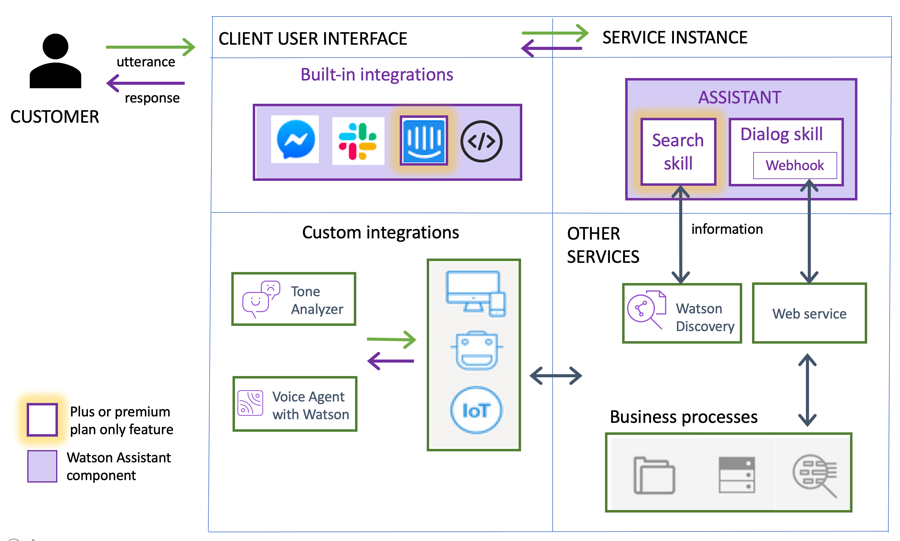 This section covers the terms that you need to know as you follow the learning path to use Watson Assistant in your applications.

By default, Watson Assistant handles one intent at a time. For example, if you have an intent #Transactions that handles transaction queries and a user says “I want to check my transactions,” then the assistant jumps to the node that responds to this condition. What about multiple intents in the same query? It gets more complicated when a user asks multiple questions at the same time. For example, if a user says “I want to check my transactions and my current balance,” there are two different intents. One is responsible for transactions, and the other is responsible for checking the balance. You’ll learn how you can tweak the assistant to give it the ability to handle multiple intents, making it smarter.

Using the confidence score, Watson Assitant can detect the intents, and if the user has a query with multiple intents, you can store these intents and then iterate through them. Following are the three main steps.

The confidence score helps you to optimize which intents to focus whenever Watson Assistant detects them. If no intents are detected, the assistant shows “Irrelevant,” which indicates that no intent has a confidence score above 0.2. You need to make sure to put a fair confidence threshold value, not too low and not too high. (If the value is too high, then it’s hard to detect the intents.) A value that ranges between 0.4-0.6 should be enough. As you see in the following image, there is a context variable confidence threshold in the first node Greetings, and its value is set to 0.4.

Capturing and storing the intents

Capturing the intents means that you want to extract all of the intents from the user’s input that have a confidence score above the defined threshold value. You can create a node that is responsible for extracting and saving the intents by using the filter function to get these intents with the expression <? intents.filter('intent', 'intent.confidence >= $confidence_threshold') ?>. The following image shows how the context variable $intents (where the the detected intents are stored) is checked to see if it is null. If it is, then get and save all of the intents that are above the defined confidence score value in the $intents variable (the $intents variable is like an array containing the extracted intents).

Two child nodes to the Extract intents node are creaated. The first one checks whether the list $intents is empty. Here, you can simply reset $intents to null. The second node is triggered whenever the list $intents has intents and makes a jump to the Iterate Intent node, so you can start the iteration. 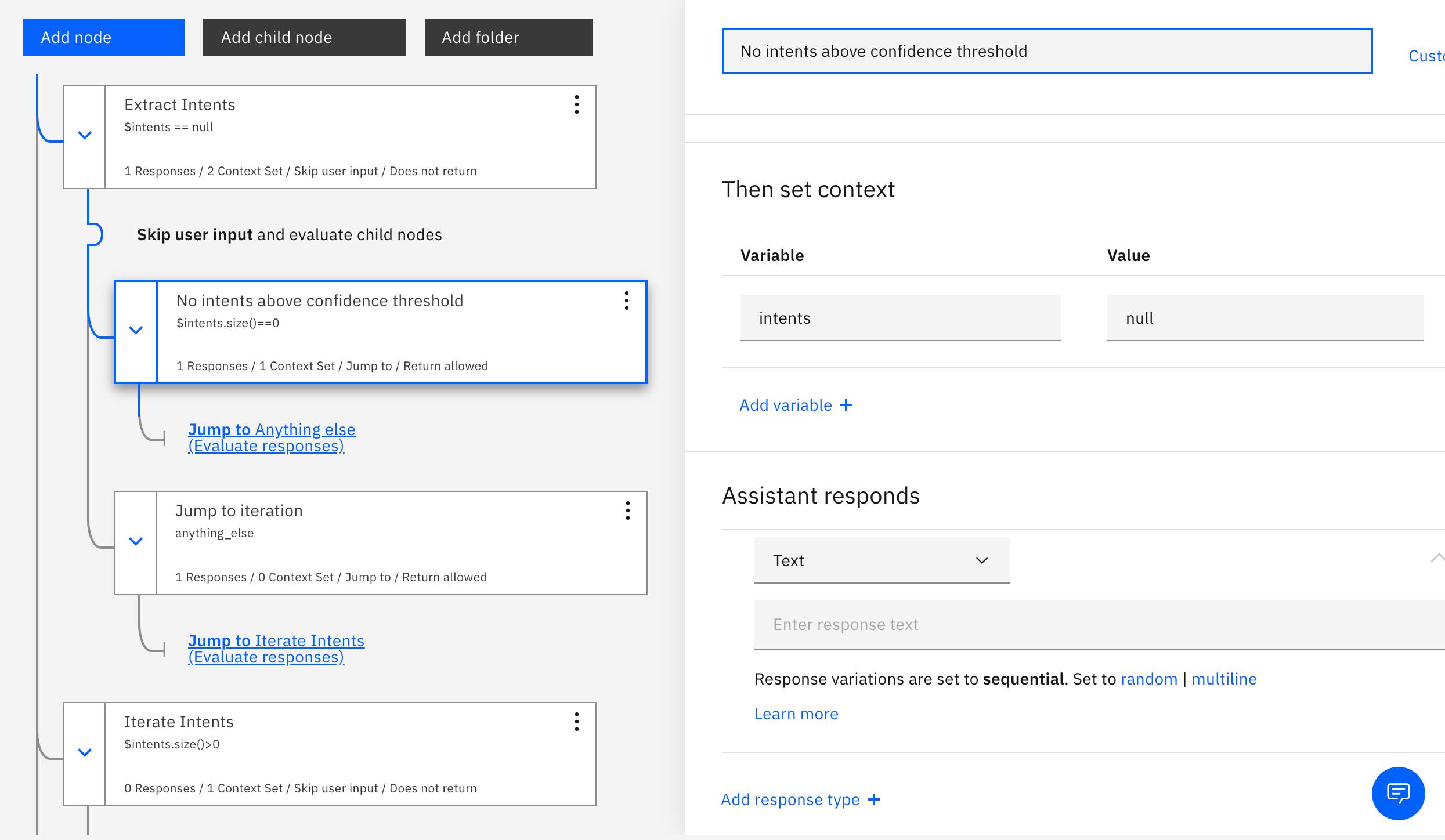 Iterating through the intents

The extracted intents are stored in the $intents variable. Now, you must loop through the list that contains the intents so that you can trigger their node correspondingly one by one.

The iteration happens in the Iterate Intents node. In the Iterate Intents node, add a condition that checks whether the intent list is not empty because you’ll return to this node after each iteration. Then, get the first item from the list $intents using the expression <? $intents.get(0).intent ?>, and store it in a new context variable so that you can use it later (in the following image, the intent is stored in $current_intent).

After the intent is stored, you must remove this item from the $intents list, which takes place in the node called Decrement array. Remove the intent from the list using the expression <? $intents.remove(0) ?>. Removing the intent is necessary so you don’t get stuck in an infinite loop whenever you return to the Iterate Intents node. As you can see in the following image, after you remove the intent from the list you jump to Evaluate Intents, which is just an entry point to the main dialog (where you’ll be using the $current_intent to trigger its corresponding node). In other words, the Evaluate Intents node does nothing. It’s just a separation between the process of extracting the intents and the main dialog. 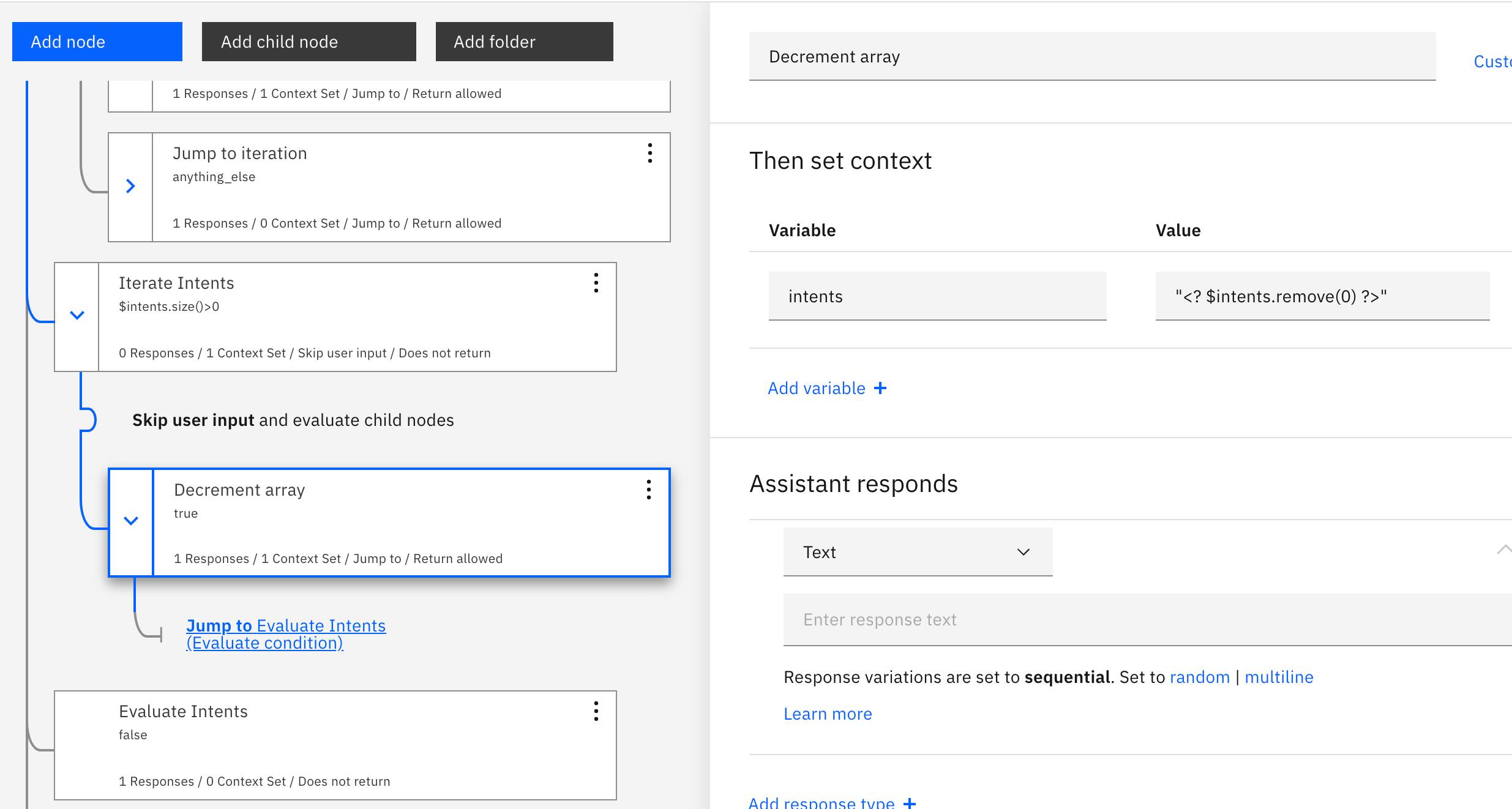 If the list is empty, then the assistant jumps to the Out of Intents node (You can add this node at the bottom of your dialog). This node just resets the list $intent to null.

There is one last step to modify, which is using the $current_intent to trigger the dialog nodes. Usually in Watson Assistant, if you want to use intents in the nodes you use #INTENT-NAME. However, here we modified the way it works because we are working with a list that contains multiple intents. We extract the first item of the list $intents and store it in a context variable. In this case, we need to use this context variable, so instead of putting #INTENT-NAME in the node, we put $CONTEXT-VARIABLE, which is $current_intent. We add $current_intent on every node that we want to trigger in the dialog.

If $current_intent has the value “updateID”, instead of putting #updateID for the Update ID node, we put $current_intent=="updateID" so that the node Update ID gets triggered. In addition, every dialog node that we want to trigger must have conditioned responses. In case the list $intents has more than one intent, we show the response to the user and add a return to the Iterate Intents node to repeat the process, and therefore, trigger the node for the other captured intents. If the list is empty (the intent that we currently have is the last intent in the list), then there is no need to add a jump, so we just show the response.

For example, if a user asks about his ID update and transactions, the assistant first triggers the Update ID node and shows the response, but it won’t stop there. The list has another intent extracted, which is transactions. Therefore, the list $intents is not empty, so the assistant automatically repeats the process by jumping back to the node where we iterate through the list, and eventually shows the response for the transaction intent.

The modification created here works just like a while loop. You extract the intents from the user’s query and store them in a context variable, which is a list containing these items. You get the first item from the list, store it in another context variable, and remove it from the list. Then, check which node uses the intent that it has stored in the context variable and trigger it. After it’s done, check if the list still has items. In case it has more items (that is, captured intents), then return to the iterating node, and repeat the process to eventually trigger every node with its corresponding captured intent.

Where is Watson Assistant available?

Watson Assistant is available in both the public and private cloud.

There are several SDKs available that support the various AI services. They are not limited to the following list.

This article gave you an introduction to Watson Assistant. It provided an overview of the service, and explained its architecture as well as it terms and concepts.. To get a high-level look at Watson Assistant including features and pricing, see the Watson Assistant product page.

Get started with Watson Assistant