Networking technologies enable IoT devices to communicate with other devices, applications, and services running in the cloud. The internet relies on standardized protocols to ensure communication between heterogeneous devices is secure and reliable. Standard protocols specify rules and formats that devices use to establish and manage networks and transmit data across those networks.

Networks are built as a “stack” of technologies. A technology such as Bluetooth LE is at the bottom of the stack. While others such as such as IPv6 technologies (which is responsible for the logical device addressing and routing of network traffic) are further up the stack. Technologies at the top of the stack are used by the applications that are running on top of those layers, such as message queuing technologies.

This article describes widely adopted technologies and standards for IoT networking. It also provides guidance for choosing one network protocol over another. It then discusses key considerations and challenges related to networking within IoT: range, bandwidth, power usage, intermittent connectivity, interoperability, and security.

The Open Systems Interconnection (OSI) model is an ISO-standard abstract model is a stack of seven protocol layers. From the top down, they are: application, presentation, session, transport, network, data link and physical. TCP/IP, or the Internet Protocol suite, underpins the internet, and it provides a simplified concrete implementation of these layers in the OSI model. 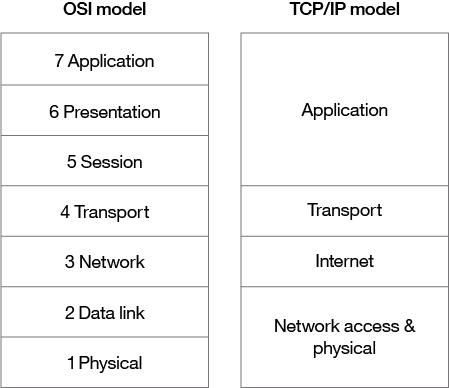 The TCP/IP model includes only four layers, merging some of the OSI model layers:

Although the TCP/IP and OSI models provide you with useful abstractions for discussing networking protocols and specific technologies that implement each protocol, some protocols don’t fit neatly into these layered models and are impractical. For example, the Transport Layer Security (TLS) protocol that implements encryption to ensure privacy and data integrity of network traffic can be considered to operate across OSI layers 4, 5, and 6.

Some of the networking protocols that are widely adopted within IoT and where they fit within the TCP/IP layers are shown in Figure 2. 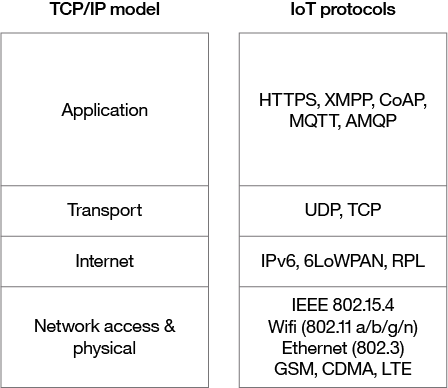 Technologies used for internet connectivity, such as Ethernet, can be applied within the IoT. As you look further down the stack toward physical transmission technologies, you face more challenges that are specific to IoT devices and IoT contexts.

The structure of a network is known as its topology. The most common network topologies that are adopted within IoT are star and mesh topologies. In a star topology, each IoT device is directly connected to a central hub (gateway) that communicates with data from the connected devices upstream. In mesh topologies, devices connect to other devices within range. Nodes within the network can act as simple sensor nodes. Sensor nodes route traffic as can gateway nodes. Mesh networks are more complex than networks with star topologies. They are less prone to failure as they do not rely on a single central gateway.

IoT network technologies to be aware of toward the bottom of the protocol stack include cellular, wifi, and Ethernet, as well as more specialized solutions such as LPWAN, Bluetooth Low Energy (BLE), ZigBee, NFC, and RFID.

NB-IoT is becoming the standard for LPWAN networks, according to Gartner. This IoT for All article tells more about NB-IoT.

The following are network technologies with brief descriptions of each:

The dawn of 5G networks

5G is the next generation of wireless networks. It builds existing 4G Long-Term Evolution (LTE) infrastructure. Notably, bandwidth is improved. But so is capacity, and reliability of wireless service.

5G is ideal for more data and communication requirements brought for the by the billions of connected devices that will make up the Internet of Things (IoT). It also aids the ultra-low latency requirement for real-time communications. It is an all-new data pipeline that serves as the plumbing for every signal, from every device, that uses the Internet. It can handle dense data.

It is fast – about twenty times faster than 4G, enabling the user to download video, say, in just 17 seconds. It is a boost to our connected world in the age of IoT, and a discernible boost to what IoT can accomplish in the future.

The arrival and full implementation of 5G is still in early implementation; soon it will be old. Rest assured, it will make our world better, our lives better, and allow the fruits of technology to shine with a tad more luster than ever before as data moves in greater volumes, quicker than ever.

Internet layer technologies (OSI Layer 3) identify and route packets of data. Technologies commonly adopted for IoT are related to this layer, and include IPv6, 6LoWPAN, and RPL.

HTTP and HTTPS are ubiquitous across internet applications, which is true also within IoT, with RESTful HTTP and HTTPS interfaces widely deployed. CoAP (Constrained Application Protocol) is like a lightweight HTTP that is often used in combination with 6LoWPAN over UDP. Messaging protocols like MQTT, AMQP, and XMPP are also frequently used within IoT applications:

Your choice of technologies at this layer will depend on the specific application requirements of your IoT project. For example, for a budget home automation system that involves several sensors, MQTT would be a good choice as it is great for implementing messaging on devices without much storage or processing power because the protocol is simple and lightweight to implement.

When you consider which networking technologies to adopt within your IoT application, be mindful of the following constraints:

Networks can be described in terms of the distances over which data is typically transmitted by the IoT devices attached to the network:

Your network should retrieve data from the IoT devices and transmit to its intended destination. Select a network protocol that matches the range is required. For example, do not choose BLE for a WAN application to operate over a range of several kilometers. If transmitting data over the required range presents a challenge, consider edge computing. Edge computing analyzes data directly from the devices rather than from a distant data center or elsewhere.

Bandwidth is the amount of data that can be transmitted per unit of time. It limits the rate at which data can be collected from IoT devices and transmitted upstream. Bandwidth is affected by many factors, which include:

The packet size of the networking protocol should match up with the volume of data typically transmitted. It is inefficient to send packets padded with empty data. In contrast, there are overheads in splitting larger chunks of data up across too many small packets. Data transmission rates are not always symmetrical (that is, upload rates might be slower than download rates). So, if there is two-way communication between devices, data transmission needs to be factored in. Wireless and cellular networks are traditionally low bandwidth, so consider whether a wireless technology is the right choice for high-volume applications.

Consider whether all raw data must be transmitted. A possible solution is to capture less data by sampling less frequently. Thus, you’ll capture fewer variables and may filter data from the device to drop insignificant data. If you aggregate the data before you transmit it, you reduce the volume of data transmitted. But this process affects flexibility and granularity in the upstream analysis. Aggregation and bursting are not always suitable for time-sensitive or latency-sensitive data. All of these techniques increase the data processing and storage requirements for the IoT device.

Transmitting data from a device consumes power. Transmitting data over long ranges requires more power than over a short range. You must consider the power source – such as a battery, solar cell, or capacitor – of a device and its total lifecycle. A long and enduring lifecycle will not only provide greater reliability but reduce operating cost. Steps may be taken to help achieve longer power supply lifecycles. For example, to prolong the battery life, you can put the device into sleep mode whenever it is idle. Another best practice is to model the energy consumption of the device under different loads and different network conditions to ensure that the device’s power supply and storage capacity matches with the power that is required to transmit the necessary data by using the networking technologies that you adopted.

IoT devices aren’t always connected. In some cases, devices are designed to connect periodically. However, sometimes an unreliable network might cause devices to drop off due to connectivity issues. Sometimes quality of service issues, such as dealing with interference or channel contention on a wireless network using a shared spectrum. Designs should incorporate intermittent connectivity and seek any available solutions to provide uninterrupted service, should that be a critical factor for IoT landscape design.

However, for the IoT, standardization processes sometimes struggle to keep up with innovation and change. They are written and released based on upcoming versions of standards that are still subject to change. Consider the ecosystem around the technologies: Are they widely adopted? Are they open versus proprietary? How many implementations are available?

Security is a priority. Selection of networking technologies that implement end-to-end security, including authentication, encryption, and open port protection is crucial. IEEE 802.15.4 includes a security model that provides security features that include access control, message integrity, message confidentiality, and replay protection, which are implemented by technologies based on this standard such as ZigBee.

Consider the following factors in shaping a secure and safe IoT network:

Proper selection of IoT networking technologies requires compromise. Selected networking technologies will impact the design of IoT devices. The considerations suggested in this article depend on many factors. For example, network range, data rate, and power consumption are all directly related. If you increase the network range or rate and volume of data that is transmitted, your IoT devices will certainly require additional power to transmit the data under those conditions.

For basic home automation, the power consideration criterion is likely of low importance; the device would most likely be powered directly from a wall socket. Bandwidth limitations and drop-outs in connectivity are higher priorities. Wifi provides reasonable bandwidth and expedites the project by using commodity hardware. However, wifi is not optimized for low-power devices, making it an unwise choice for a battery-powered device.

This article provides an overview of some of the most common networking protocols and technologies for IoT. It is most important to consider your requirements in light of these IoT networking challenges to find the technologies that will be the best fit for your IoT application.