Use GitOps to combine infrastructure and application services

The GitOps operational framework is built around the developer experience and is designed to help teams manage infrastructure and applications by using the same tools and processes that they use for software development. With GitOps in the real world, however, there are lots of tools for accomplishing different tasks. This can raise questions such as Which tools should I use? and How should I use them? This article describes what GitOps is and introduces you to the control plane, which contains tools to help you manage infrastructure and application configurations when putting GitOps into practice.

GitOps can be applied not just to classic infrastructures such as virtual machines (VMs), but also to Kubernetes, network configurations, application definitions, and resources that are described by config files and applied to an environment through automation. This means that GitOps incorporates IaC as well as Network as Code, Configuration as Code, Security as Code, and more.

Crossplane is an open source Kubernetes add-on that transforms your cluster into a universal control plane. With Crossplane, platform teams can assemble infrastructures from multiple vendors, and application teams can consume higher-level, self-service APIs without having to write any code.

Putting it all together

With GitOps, the application source code and declarative environment configuration are stored in a Git repo. You review the application source code and make changes by using a pull request. Your continuous integration (CI) pipeline detects the changes and triggers the build into an artifacts repository. Your site reliability engineer (SRE) makes changes to the environment configuration in the Git repo and merges the changes after the review process.

The control plane includes Argo CD and Crossplane. You can use Argo CD to deploy and upgrade Crossplane providers, and to deploy and manage your cloud-native applications. Meanwhile, Crossplane extends your Kubernetes cluster to support infrastructure orchestration through different types of providers based on your config file. For example, provisioning a virtual private cloud (VPC), Kubernetes, or Red Hat OpenShift platform environment from IBM Cloud through provider-ibm-cloud, deploying infrastructure from Amazon Web Services (AWS) through provider-aws, or deploying resources from Google Cloud Platform (GCP) through provider-gcp. If your config file is updated, then Argo CD can detect the changes and get the update through a pull change. The same thing happens to the image file where Argo CD detects the modification and gets it through a pull image.

With declarative descriptions in a Git repo, you can manage all of your resources from the infrastructure layer to the application layer, as illustrated in the following diagram of an IBM Cloud example. 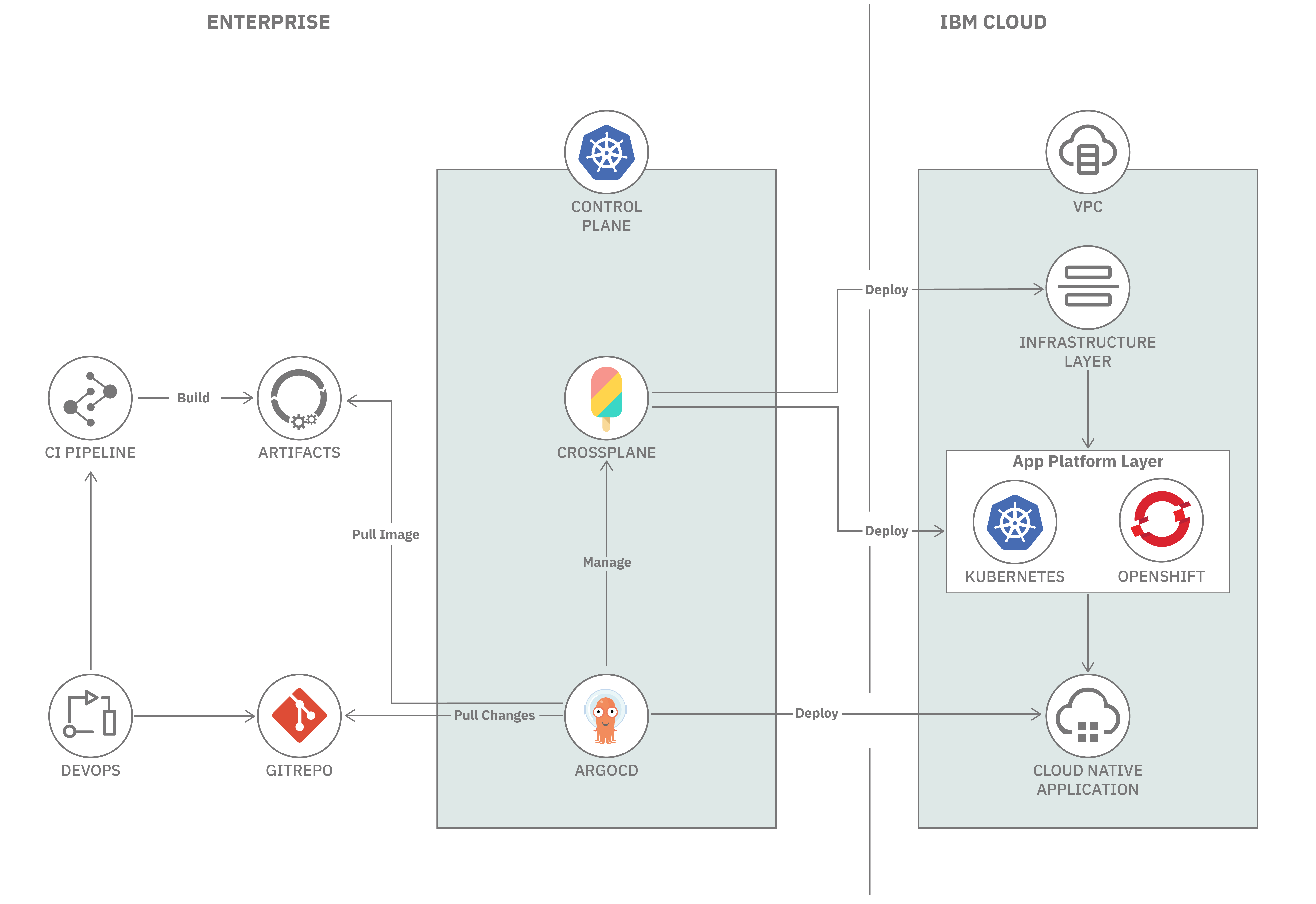 Kubernetes is a basic requirement for Argo CD and Crossplane. With the Argo CD application, you can combine the infrastructure and application service. For example, let’s say you are using OpenShift in an instance where your control plane is running. Here are the steps for the example implementation:

After your code is ready, you can put the previous config file into a YAML file and then deploy it in Argo CD. Then you can provision the infrastructure, even if you don’t care where the infrastructure is from, and automatically manage your application. This allows you to focus on your core application — which is the main reason for using GitOps!

This article started by exploring basic GitOps concepts and introduced you to the Crossplane and Argo CD open source tools. We then demonstrated how Crossplane can help you assemble infrastructure resources from multiple vendors and how Argo CD can help you manage Crossplane and Kubernetes applications.

Providers extend Crossplane to enable infrastructure resource provisioning. You can use the existing providers that are provided by Crossplane, such as provider-ibm-cloud, provider-aws,provider-gcp, provider-azure, and provider-rook. You can also write your own providers if you prefer.

For more information about GitOps, check out these resources: