What is GitOps and how can it help with day-to-day development and operations?

There is a common misunderstanding about how GitOps should be applied in real-world environments. Developers equate Infrastructure as Code (IaC) with GitOps in concept or believe that GitOps can only work with container-based applications — which is not true. In this blog, you will learn what GitOps is and how to apply its principles to real-world development and operations.

The 4 basic principles of GitOps are:

You can learn more about these principles in the Introduction to GitOps with OpenShift post on the Red Hat Hybrid Cloud blog.

The GitOps methodology has several advantages:

GitOps practices can be applied not only to classic infrastructure like VMs, but also to Kubernetes, network config, application definitions, or even resources that can be described by config files and applied to the environment through automation.

Here’s an overview of how GitOps works:

The following diagram illustrates a typical high-level architecture for applying GitOps in a single environment: 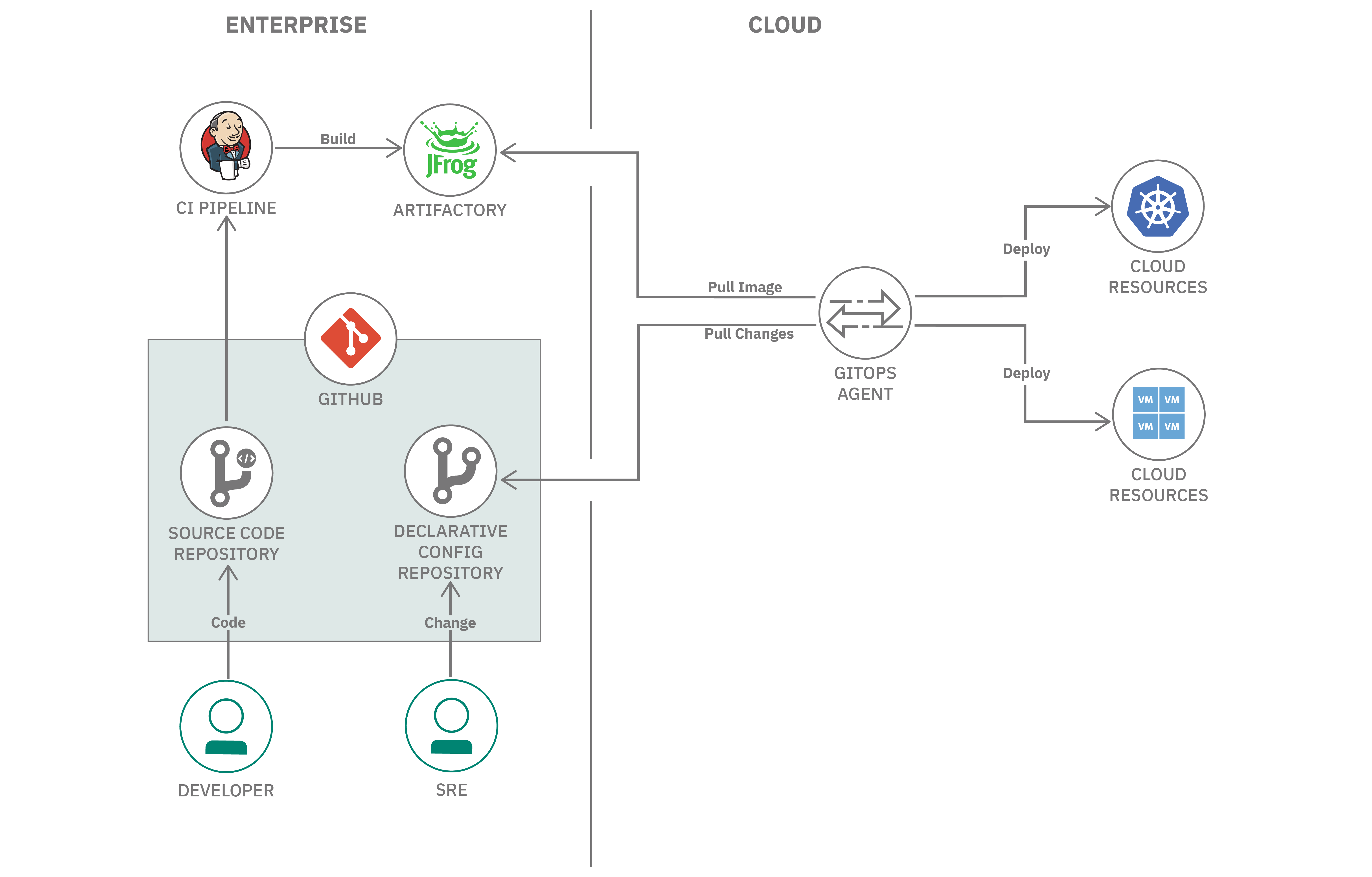 GitOps in the real world

Day-to-day operations in the real world, however, can be complicated. For example, how do you handle destructive changes that are applied to an environment? An incorrect change can destroy a bare metal server, which can result in lost data and changes to the IP. How does GitOps work with different environments (such as development, staging, or production)? How do you promote changes to staging and production?

In this section, we address these questions and discuss how GitOps can be applied to real-world operations.

In many cases, GitOps works fine with Kubernetes clusters since it naturally supports declarative deployment and immutable infrastructure. However, real-world cloud infrastructures can be complicated and hybrid cloud can include many different resources, such as bare metal, classic VSI, network devices, cloud databases services, Kubernetes clusters, and containers.

Each type of resource has its own lifecycle. Imagine that you have a Kubernetes cluster built on top of several VSIs, and the cloud-native application that’s deployed as containers has the shortest lifecycle. The cluster may have a longer lifecycle than a VSI since the worker node of a cluster is changeable over time. The bare metal server has the longest lifecycle of them all. 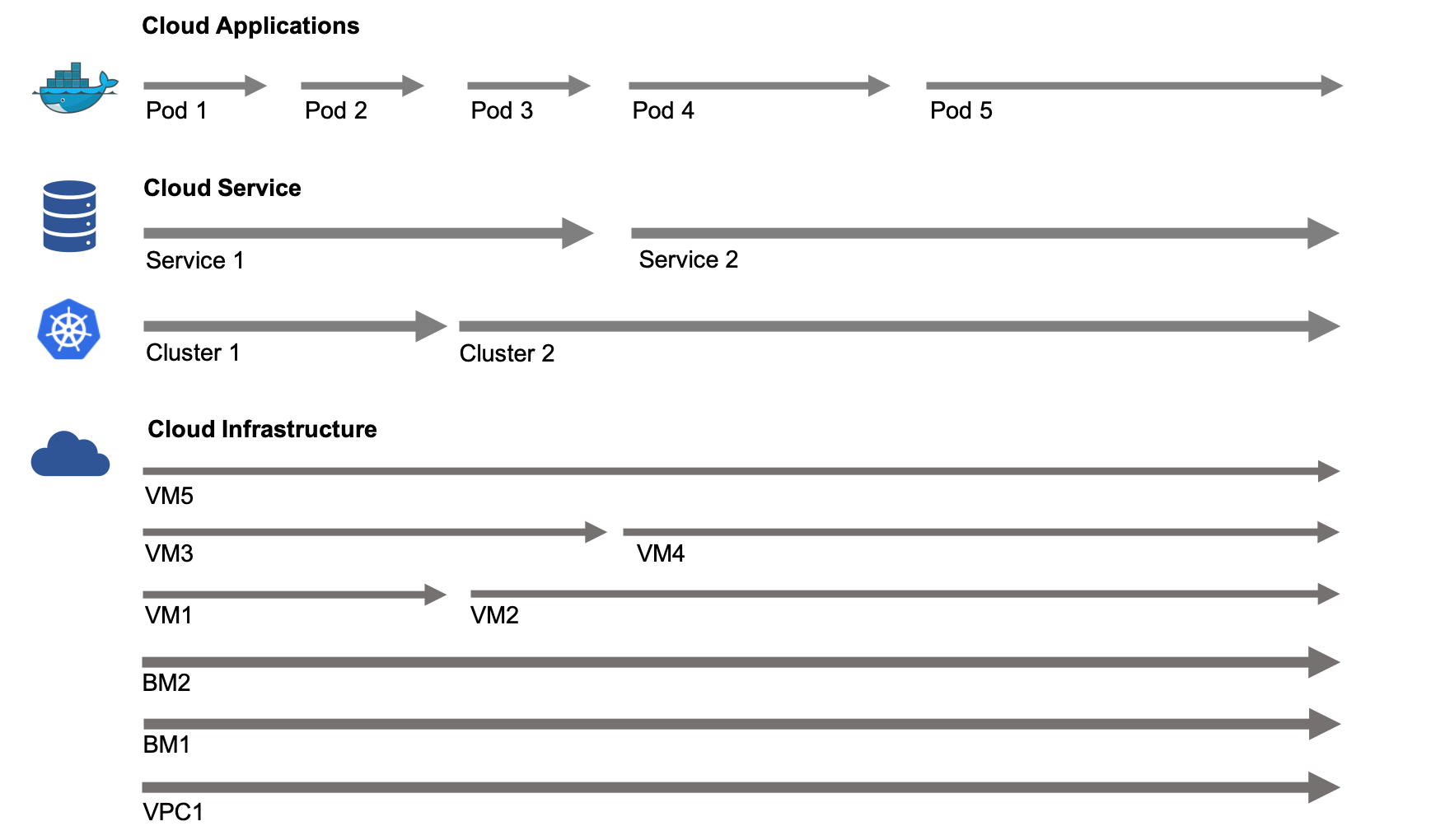 Because there are different resource lifecycles, you cannot process all the changes against the full stack through a single CI/CD pipeline or a single operation workflow. You need to use different strategies when applying GitOps practice to full-stack cloud resources.

However, let’s say you’re deploying an application on top of a classic infrastructure with limited resources, and it still has a long lifecycle. In this case, the GitOps methodology can still be leveraged to manage the infrastructure to take the advantage of GitOps, such as versioned changes over time and improved security.

Even though pull-based deployment is a GitOps best practice that can ensure better security, GitOps adopters are not required to use pull-based deployment. However, in some situations not everything can be described using declarative configuration and there is no option for using a push-based deployment — for example, to provision a cloud infrastructure using tools like Jenkins, Travis, or Ansible.

The description above mainly describes how GitOps works with a single environment. However, in real-world cloud environments (as with DevOps), you usually have multiple environments to support development, testing, and production scenarios.

The following diagram is a reference model that illustrates how GitOps can work with development, staging, and production environments:

The Git workflow is set up to support code review, approval, merging, and testing. After the changes are pulled by the development environment and pass the integration tests, then the same changes can be promoted to the staging branch by creating a new pull request on staging. By doing a similar process, a change made by a developer or SRE can ultimately be pulled by the production environment.

Note that this process is just a reference model. In real-world situations, a project team could tailor this based on architecture decisions made for the actual situation.

With what you have learned, you can also define a high-level reference architecture to apply GitOps practices to an IBM Cloud environment. This would look similar to the architecture shown in the GitOps overview, but the main differences here would be based on real-world situations. In the diagram below, we’ve mapped the components to a suggested software instance. 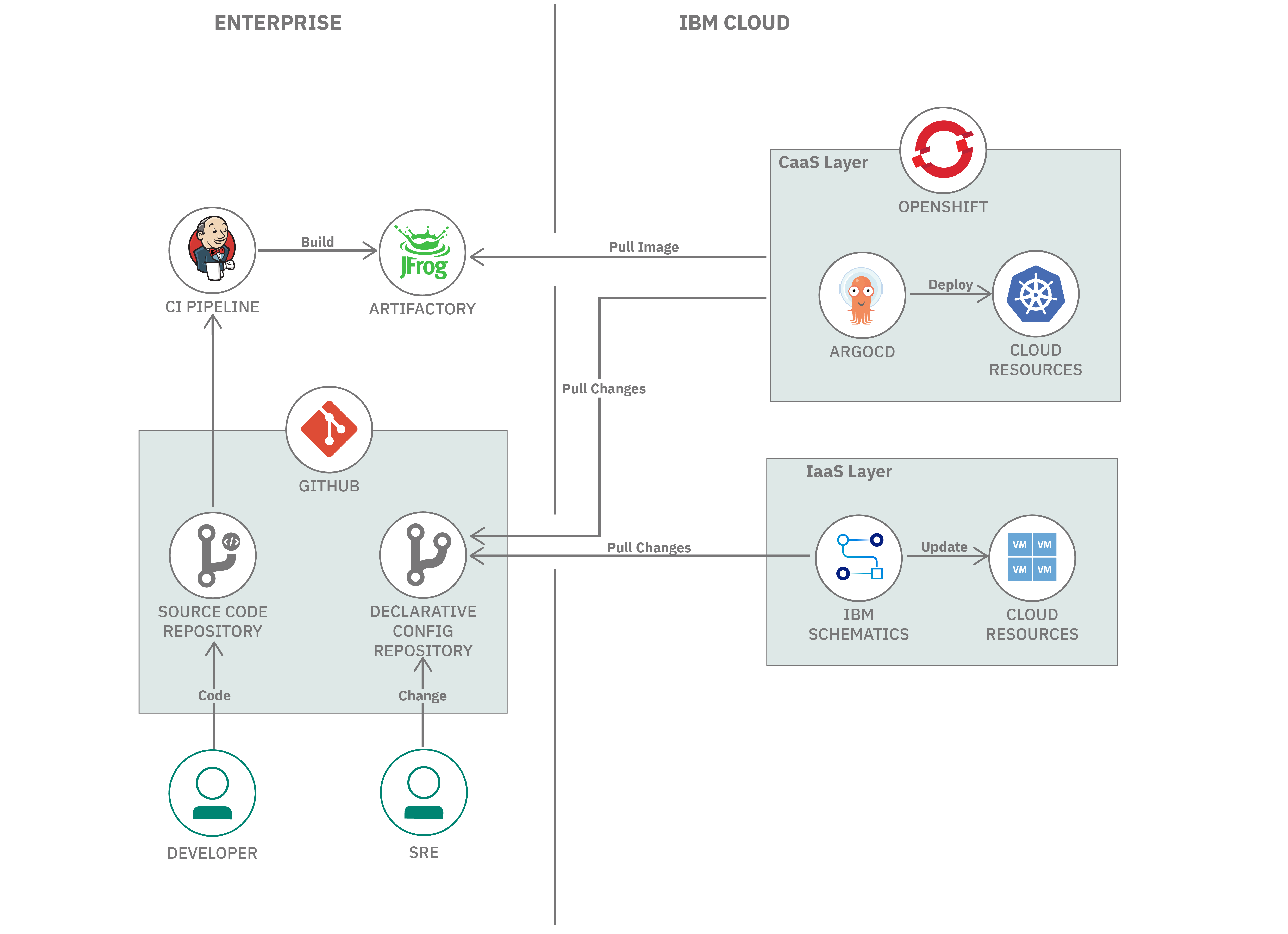 Most importantly, this architecture separates the CD processes for the CaaS and IaaS layers, since they can have very different resources and lifecycles. Based on the nature of the resources, different tools are used for different resources. More specifically, we recommend installing the GitOps plug-in on a Red Hat OpenShift instance. This ships an Argo CD instance out-of-the-box to play the GitOps Agent role to deploy the changes in the CaaS layer. On the IaaS layer, the IBM Cloud Schematics service implements GitOps practices by encapsulating the Terraform plug-in for IBM Cloud, which pulls the infrastructure changes and provisions/updates most of the IBM Cloud resources.

In this blog post, you learned about GitOps principles, the advantages provided by GitOps, and some best practices illustrated through real-world examples. GitOps can not only be applied to container-based apps, but also to a full stack of cloud resources. With well-designed automation processes, it can also support development and operations that promote changes in multiple environments.

GitOps is an improved approach for using DevOps on the cloud, but it cannot solve every challenge. That said, GitOps should be employed as a useful tool in your cloud DevOps toolbox.

Want to learn more about GitOps? Check out these resources:

Use DevOps to drive quality assurance and testing

DevOps testing approaches for the beginners