Cloud technology is so prevalent today that a recent IBM Institute for Business Value study found that a typical enterprise uses nearly eight clouds from multiple vendors. The study also notes a surge in the adoption of hybrid clouds — the combination of public clouds, private clouds, and on-premises IT — noting that in the next three years, hybrid cloud adoption is expected to grow by 47%, and the average organization will be using nearly six clouds.

All of this begs the question: What cloud skills are most important to developers?

A newly published survey conducted in the fall of 2020 by O’Reilly Media, commissioned by IBM, suggests that instead of focusing on skills related to a specific vendor’s cloud, developers would be better off building skills around the open source technologies that underpin those clouds.

Highlights from the O’Reilly Media survey about open source and the cloud, to which over 3,400 developers and technology managers responded, include:

According to the survey, “Modern software architects and developers should remain aware of both trending open source technologies and cloud offerings. Over the long term, a knowledge of the most fundamental open source projects will provide major benefits in job growth and other professional activities.”

Why you should focus on developing your open source skills

So, when choosing where to spend your free time honing your development skills, you’re better off building open source skills than skills related to a specific cloud. The reason? Most companies will adopt an open hybrid cloud approach. An open hybrid cloud combines and unifies public cloud and private cloud services from multiple cloud vendors to create a single, flexible IT infrastructure, which—in the age of cloud data and AI—is based on open source technologies. In fact, almost every major cloud vendor’s container platform is built on Kubernetes—and the containers themselves are being built with other open technologies.

The skills you develop related to these technologies are transferable across the developer community and ecosystem, and of course to any proprietary cloud that you work on.

The survey found that two-thirds of developers agreed that open source experience provides greater value than specific vendor’s technologies. In the survey, more than 65% of respondents agreed that contributions to open source projects impress potential employers and often result in better job opportunities.

Specific results from the survey that show how developers feel about open source skills: 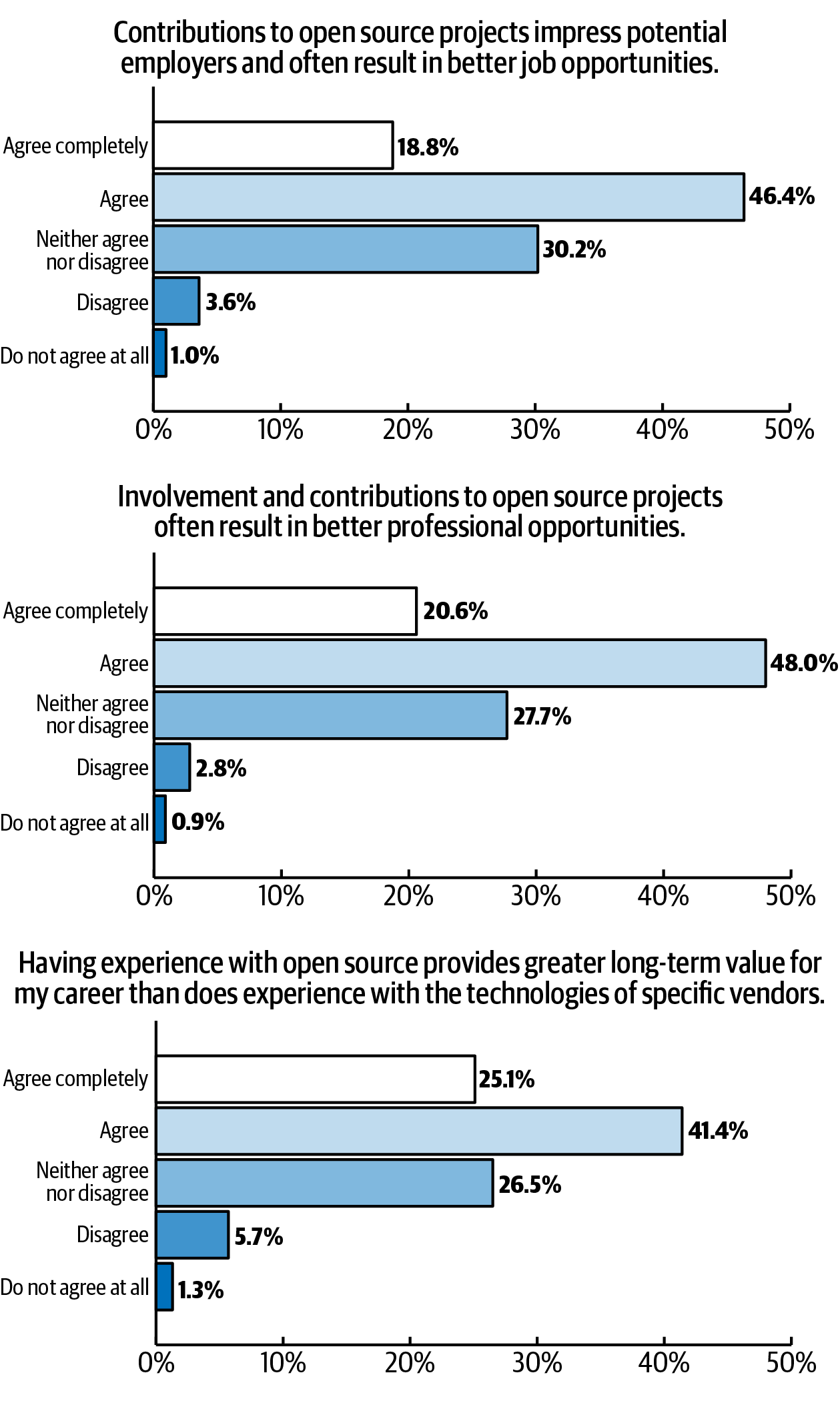 Similarly, the Linux Foundation’s 2020 Open Source Jobs Report pointed out that 93% of hiring managers report difficulty finding sufficient talent with open source skills, up from 87% in 2018. The report also notes that hiring managers report knowledge of open cloud technologies has the most significant impact, with 70% being more likely to hire a pro with these skills, up from 66% in 2018.

These findings all point to one thing: Open source skills are in demand. Developing skills in open source software that supports cloud technologies will do the most to advance your career.

Open source as the foundation of an open, hybrid cloud environment

At IBM’s core, we believe that open source is the bedrock of modern computing, powering the most progressive tech of our time, from blockchain to quantum to AI and cloud.

One of the foundations of IBM and Red Hat’s combined open hybrid cloud strategy is Kubernetes, the open source application container orchestration software that makes it easier to configure, deploy, and manage containerized applications. Containers are used as a way of getting the software to run reliably when it’s moved from one computing environment to another, which we know is happening more and more often.

Through OpenShift, IBM is providing the platform by which developers can build for hybrid cloud in open source. We are working to provide the tools to help your development journeys including skills and enablement.

Whether you’re a solo developer, work for a start-up, or a large enterprise, contributing to an open source community will help you achieve your professional and business goals. We are excited to see more companies and developers embracing open source software and operating principles.

Spending time contributing to the open source community is much more than a resume builder. It’s a competitive advantage for your business. Developers strongly prefer open source to proprietary cloud platforms and will therefore lead the charge for the dominance of open hybrid cloud.

Open source adoption in the enterprise is valuable for open source ecosystems that thrive on the strength and diversity of the community. More enterprise developers working in the open produce more secure, innovative technology for all.

We asked a few develoeprs from IBM and our partners to share how their own open source skills helped their career growth — and what they look for when they’re hiring new developers.

Get involved in open source

7 ways to be a valuable open source community member