Getting started with application modernization

In the third step of our application modernization journey, we will take the small, simple step of selecting just one function of our monolithic application to refactor to a microservice. We will use Martin Fowler’s Strangler Fig Pattern (or just Strangler Pattern).

The identification of the first microservice to be split from the monolith is not trivial though. Let’s take a look at my sample example that we’ve been working with.

My first idea was to move the catalog functionality into a separate service. Most users of e-commerce sites probably navigate through different offers while only few users actually log in, add something to their shopping carts, and then order something. The advantage of splitting the catalog functionality from the monolith is this part of the application can be scaled independently from the rest of the application. Economically, this means you need less resources like CPU and memory, which also leads to less costs.

The other reason for splitting the catalog service from the monolith is there are only a few dependencies to the remaining functionality, which leads you down the path of creating distributed monoliths, which I don’t recommend. Microservices shouldn’t be too micro.

To learn more about how to use IBM Mono2Micro on your more complex monoliths, complete the “Introduction to IBM Mono2Micro” learning path.

IBM provides a tool called Mono2Micro that can help you identify microservices candidates, especially for more complex monolithic applications. Mono2Micro is available separately but also as part of WebSphere Hybrid Edition. In this tutorial, I’ll show you how to use Mono2Micro on our sample app, and we’ll see which functions it recommends refactoring into microservices.

Make sure that you’ve reviewed the sample example that we are using for the tutorials in this learning path.

Next, if you haven’t already done so, clone the repo to get the complete source code for the sample application:

Step 1. Use the Data Collector in IBM Mono2Micro to record how the sample app is used

Before we use the Data Collector in IBM Mono2Micro, we need to modify the source code to contain debug information for when which classes and methods are invoked.

Next, we need to launch the application with the modified source code.

Next, open the application in a browser: http://localhost/CustomerOrderServicesWeb.

Finally, we’ll use the Data Collector of IBM Mono2Micro to record how users typically interact with the application. Each of the following flows is a use case. Use these commands to record typical use cases of our sample e-commerce application: 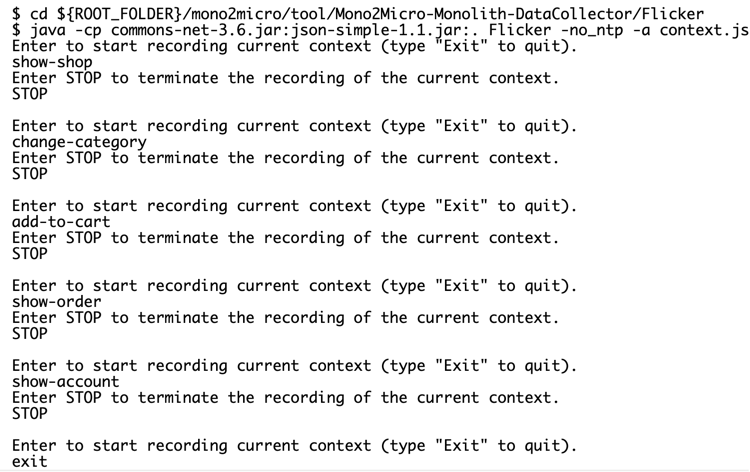 Step 2. Use the Mono2Micro tool to generate suggestions on how to split our monolith

Now, let’s use the Mono2Micro tool to generate suggestions on how to split our monolith up into microservices.

Open the Mono2Micro web application in a browser: http://localhost:3000/

Mono2Micro suggests to move the catalog functionality into a separate service. This makes a lot of sense since this functionality can be scaled separately now. Users are browsing the catalog more often than actually buying items.

The purple rectangle is essentially the catalog service (except of the missing Category class). The green classes make up the remaining monolith (except of Address). The red classes need to be assigned to either the catalog service of the remaining monolith dependent of class dependencies. Most of them are exceptions which weren’t covered in the use cases. 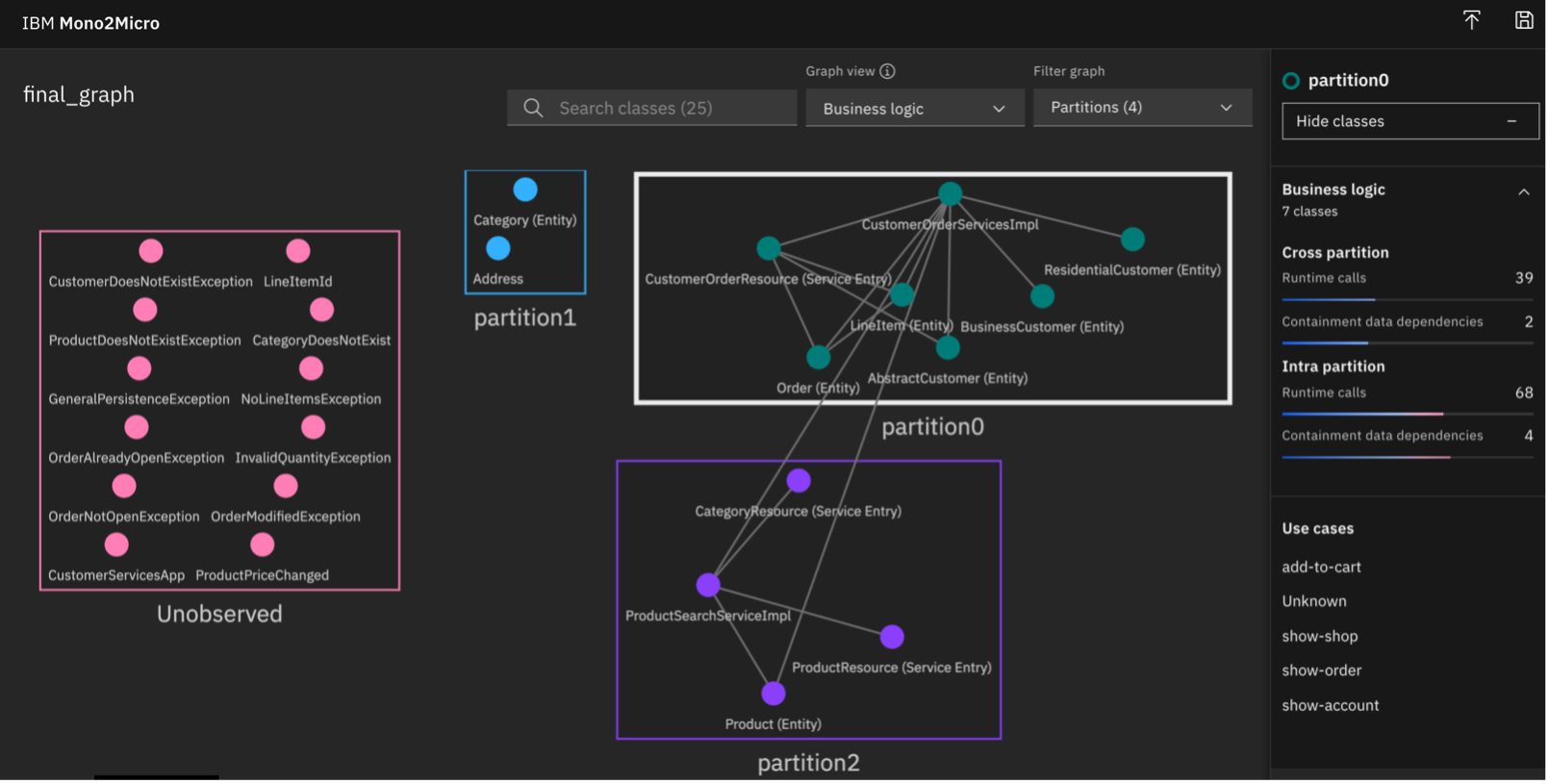 In our previous application modernization step, we modernized our monolith to take advantage of Open Liberty with a new project structure and only one pom and one project. Also, we used Contexts and Dependency Injection (CDI) rather than the EJBs.

The full name of the Panache Quarkus library is Hibernate ORM with Panache, which you can learn more in this guide.

Since the Mono2Micro tool confirmed my suspicions that we should strangle the Catalog service of our sample application, I proceeded to refactor it into a microservice by using the Quarkus library, Panache, which is an extraction of JPA.

You can explore the code of my refactored Catalog service in my GitHub repo.

As part of strangling the Catalog service, I also modernized the monolithic DB2 database to use the open source Postgres database.

In this tutorial, we took the next step in modernizing our sample application by refactoring one of the functions in the monolith into a microservice.

Our next step is to separate the frontend and build micro frontends.