Investigate some of the testing techniques developers can utilise to ensure reliability within their cloud-native, Java applications and get hands on with some of the open source tools available to help achieve this.

This series looks at the different types of tests you can use to ensure reliability within your cloud-native Java applications, as well as various tools and frameworks you can use to achieve this. Get hands-on experience using these testing techniques and tools and test applications running in Open Liberty.

Why do you need tests?

In an ideal world where we’re all perfect developers, tests wouldn’t be needed. Instead, we would simply write code and deploy it immediately into production on a Friday afternoon, without getting calls at 2am for support. Unfortunately, this is not the case. Because code is not always perfect, you still need to test your applications to have confidence that they work the way you intend them to.

Unit tests – Typically, unit tests are automated tests written and run by software developers to ensure that a section of an application (known as the “unit”) meets its design and behaves as intended. In procedural programming, a unit could be an entire module, but it is more commonly an individual function or procedure.

Integration tests – In this level of software testing, individual units and components are combined and tested as a group. The purpose of this level of testing is to expose faults in the interaction between integrated units.

System/End-to-end/UI tests – These types of tests test the entire software product from beginning to end to ensure the application flow behaves as expected. It defines the product’s system dependencies and ensures all integrated pieces work together as expected. The main purpose of End-to-end (E2E) testing is to test from the end user’s experience by simulating real user scenarios. 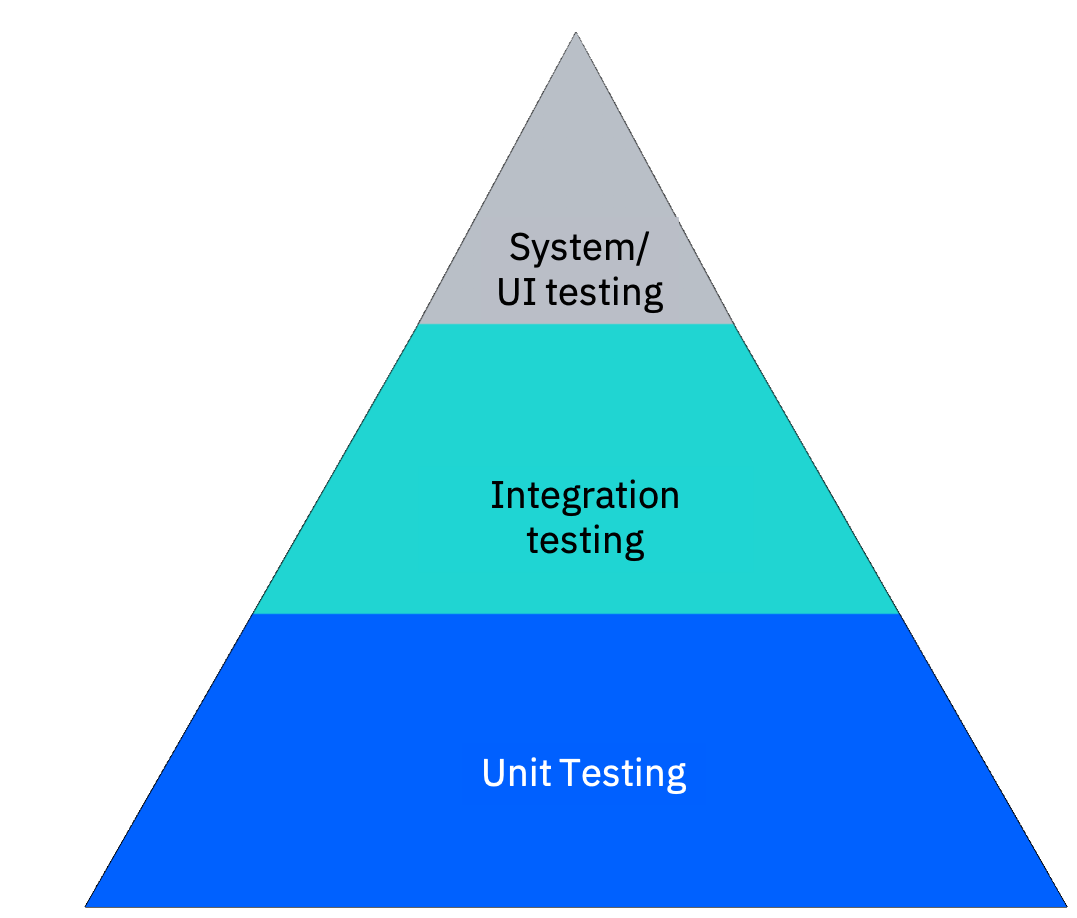 Most applications benefit from having a balanced mix of various types of automated tests to capture different types of errors. The exact composition of the mix varies depending on the nature of the project. In general, though, the amount of each type of test should roughly follow this testing pyramid shape. The bulk of your tests should be unit tests (at the bottom of the pyramid). As you move up the pyramid, your tests get larger, but–at the same time–the number of tests (the width of your pyramid) gets smaller.

If a project has large number of integrations or complex interfaces, it should have more integration and end-to-end tests. A project that is primarily focused on computation or data, should have more unit tests and fewer integration tests. The right mix depends on the nature of the project but the key is to retain the pyramid shape of the testing pyramid, that is, Unit > Integration > End-to-End Tests.

So, tests are obviously important to ensure our applications work correctly. However, tests take time to write and are often an area of the development cycle that is de-emphasized, with developers often encouraged to move on to new feature development and spend less time on tests. Given the limited timeframe developers are often given for this stage of development, how can you use your time in the best ways to create tests that enable greater confidence in our applications? This is where tools can be really useful. The right tools enable you to test more functionality within your application in the same timeframe.

This series introduces you to various tools that can be utilized to create more effective tests for your applications.

Upon completion of this series, you will:

This series gives developers an introductory overview of different testing styles and tools available to enable these tests. However, a basic understanding of microservices and application architecture would be helpful. You will also need an understanding of command lines in order to undertake the tutorials included in this learning series.

This series is split into two sections: a general introduction to testing styles and tools and getting hands-on experience with the tools.

A general introduction to testing styles and tools

Getting hands-on with using these tools:

Use the articles in this series to learn about different types of tests to test your Java applications. Walk through hands-on tutorials to get experience with various kinds of testing tools and techniques.

If you’d like to learn more about testing microservices, then check out this great video tutorial series that Sebastian Daschner has created. It focuses on testing Java-based enterprise applications, and his application makes use of MicroProfile and Jakarta EE.

Get your Java microservice up and running

IBM and Java: The next 25 years