In this tutorial, we show you how to create a Java Message Service (JMS) application using either a message-driven bean (MDB) that receives incoming messages from an IBM MQ queue manager or a servlet that uses a JMS connection factory to send and receive JMS messages.

Completing this tutorial should take around two hours.

JMS is an API defined by the Java Enterprise Edition (Java EE) specification that allows applications to send and receive messages using reliable asynchronous communication. Liberty supports both the JMS 1.1 and JMS 2.0 versions of the specification. It provides the ability to use a range of messaging providers including MQ, the IBM WebSphere Liberty embedded JMS messaging provider, or a third-party messaging provider. JMS 2.0 is the latest version of the specification and provides for a simplified API over the classic JMS 1.1 API. The MQ v9 JMS resource adapter is required to use JMS in CICS Liberty, and you can use it to connect to an MQ v7, v8, or v9 queue manager. The v9 resource adapter only supports JMS 2.0, but you can also deploy applications written to the JMS 1.1 API into a JMS 2.0 environment such as that provided in CICS Liberty. 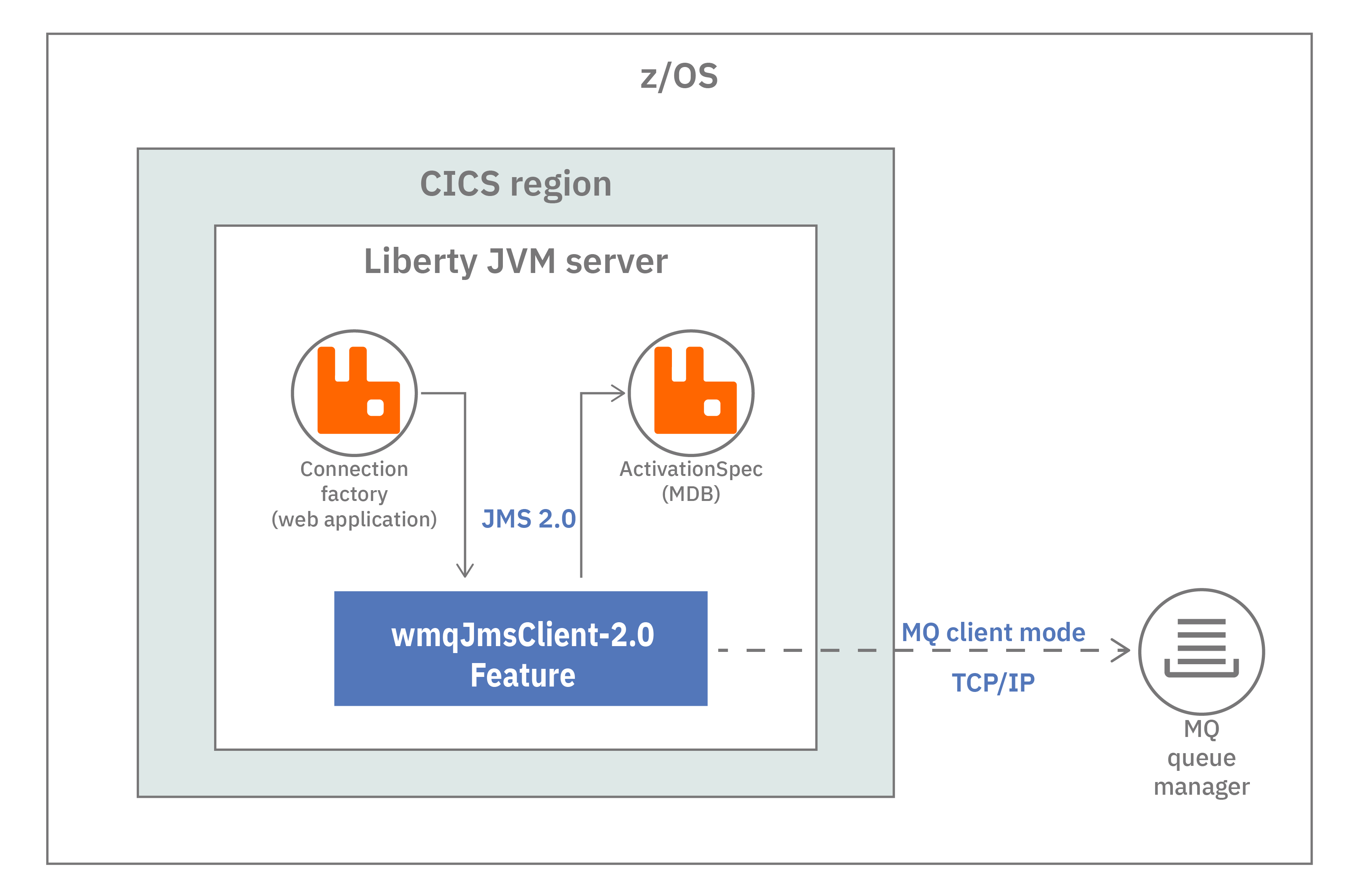 Use JMS in CICS with MQ

There are three potential ways of connecting to MQ from a CICS JVM server:

There are 3 different JVM server environments in CICS that support JMS:

This tutorial uses the Liberty JVM server running in integrated mode with an MQ client mode connection over TCP/IP to a queue manager on the same IBM z/OS system. All the sample code from this tutorial is available in the CICSDev Git repository.

Our sample MDB application provides a message-driven bean called MySimpleMDB that receives messages from an MQ queue and writes the message body to a CICS temporary storage queue (TSQ). 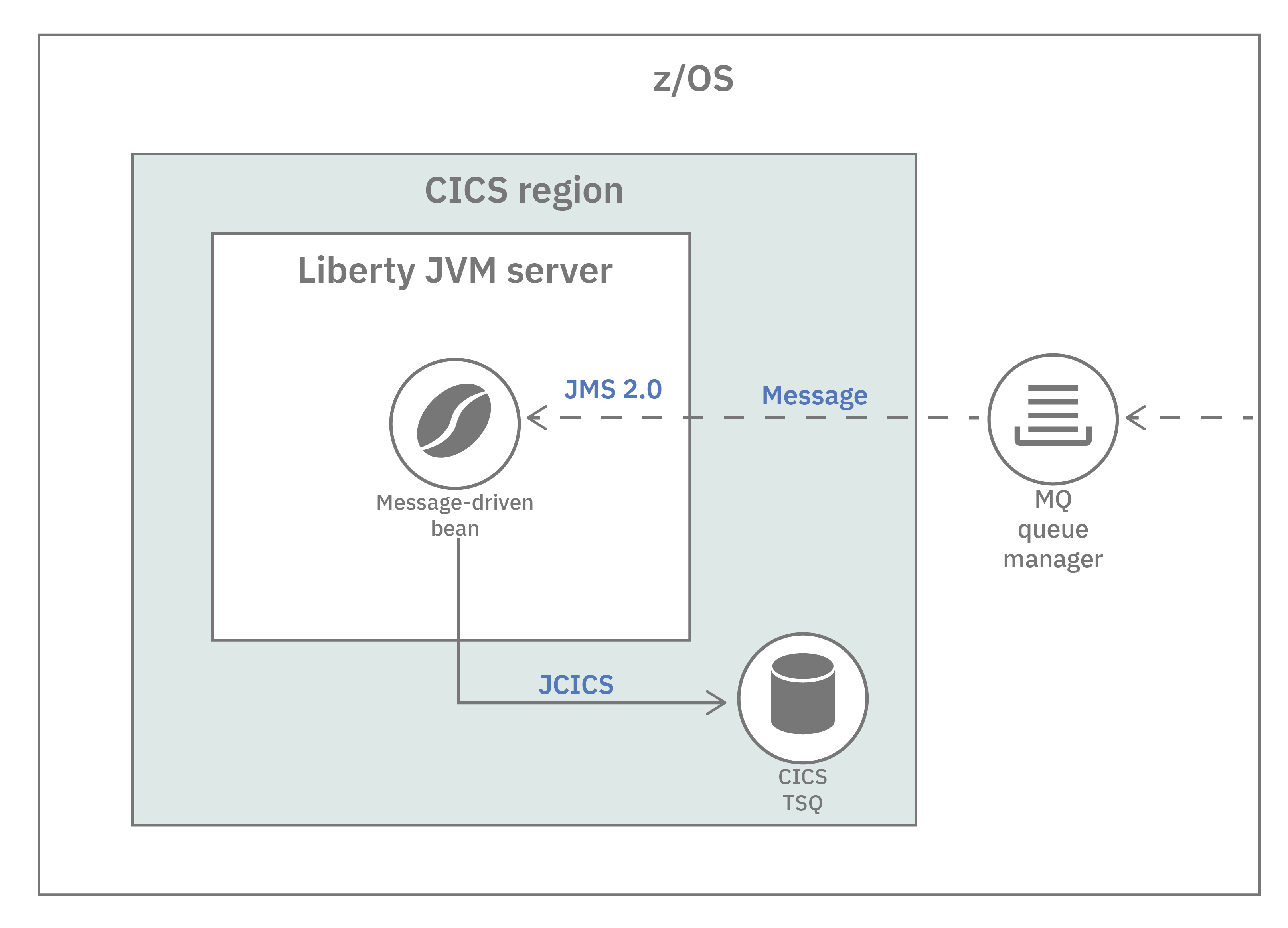 An MDB is implemented in Eclipse using an Enterprise Java Beans (EJB) project, so first of all, you need to create an EJB project, and then you can simply add an MDB using the Eclipse wizard New -> Message-Driven Bean (EJB 3.x). In the resulting dialog, be sure to check JMS to specify that the MDB is a JMS message type, and then select the Destination type as Queue.

The resulting generated class should look similar to the following code, and the key lines are explained below.

The first processing that our MDB performs is to analyze some of the message headers. The JMS API provides access to the message header fields such as the destination, delivery mode, reply queue and so on. Each of these has its own JMS field, and these map to MQMD and MQRFH2 fields as documented in Mapping IBM MQ fields onto JMS fields (incoming messages) in the IBM documentation.

Message properties consisting of a name/value pair are a standard way of passing metadata with messages. Message consumers often use them to selectively get messages from queues. In our application, the message property, if set, determines the name of the CICS TSQ to which the message body is written.

An MDB is a type of EJB and can therefore use either container-managed or bean-managed Java transactions. In your MDB, add the @TransactionAttribute annotation to the onMessage() method with the value=TransactionAttributeType.REQUIRED to define this method as always being part of a container-managed Java transaction. When used within a CICS Liberty JVM server, this requires a Java transaction to be used to control both the Liberty-managed resources and the CICS unit of work. This means that the commit() method on the JMSContext() cannot be used to commit updates to the queue manager because they are controlled by the Liberty Transaction Manager. For our MDB using the TransactionAttributeType.REQUIRED, this means that both the read from the JMS queue and the write to the CICS TSQ are part of the same global transaction so they commit or roll back together providing the TSQ is defined as recoverable to CICS.

The CICS transaction ID under which the MDB request runs defaults to CJSU, which is the JVM server unclassified request processor. This can be modified per the JVM server using the system property com.ibm.cics.jvmserver.unclassified.tranid.

To test the MDB sample, download the code from the Git repository and perform the following actions to configure the Liberty JVM server as detailed in the repository readme file.

Having written to the DEMO.MDBQUEUE, the string “hello” should now have been passed in the JMS message body and written to the TSQ RJMSTSQ. You can verify this in CICS using the CEBR queue browsing transaction. Alternatively, you can install the MQJMSDemo servlet, which can read the CICS TSQ. 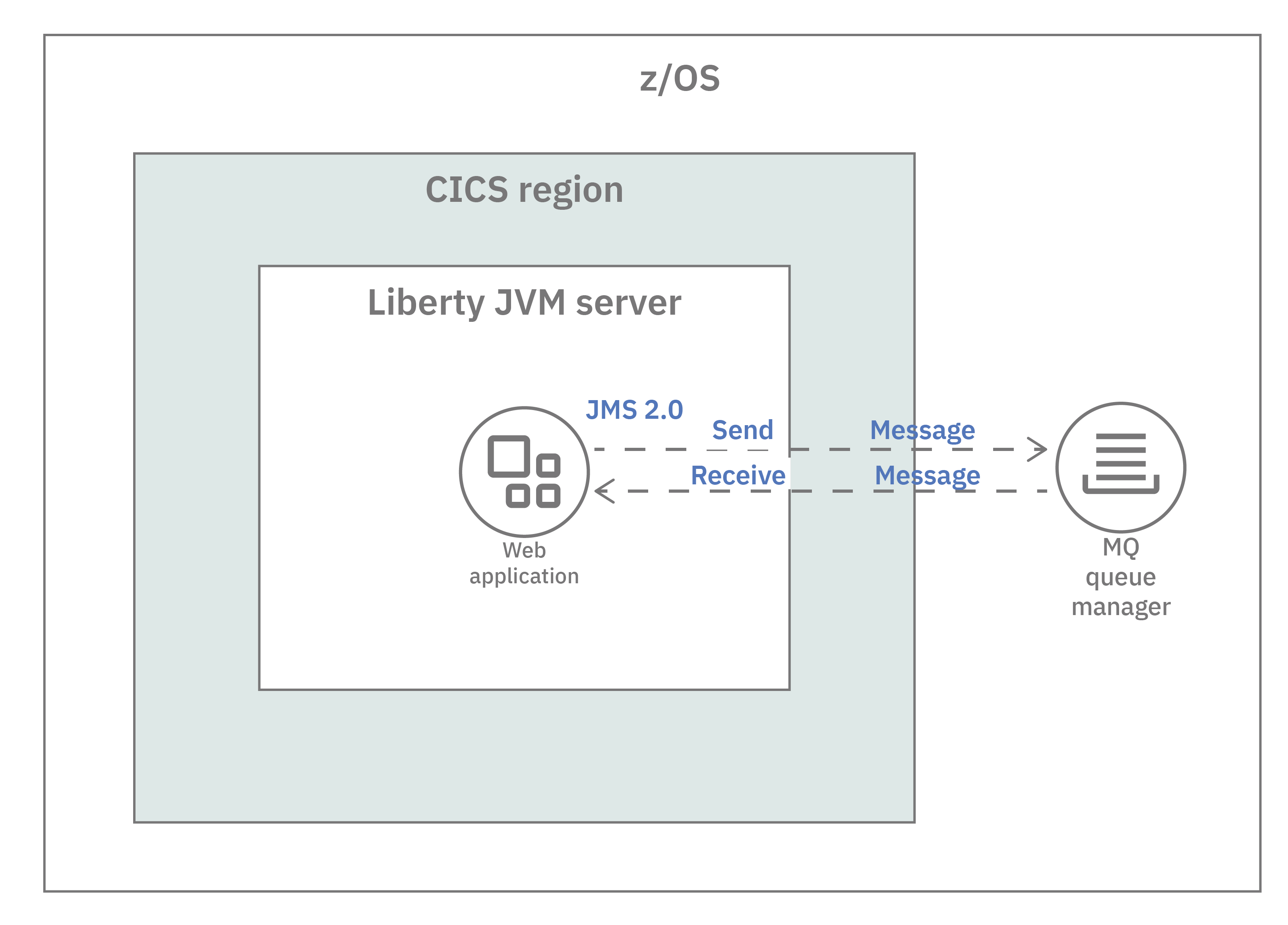 When using a servlet, the init() method runs once at servlet initialization and is therefore a useful place to look up the Java Naming and Directory Interface (JNDI) references for the connection factory and the required queues. In our servlet, these objects are defined as class instance variables and are hence shared between all servlet invocations.

Write to the queue

Use the putQ method in the servlet to write a simple string to the DEMO.SIMPLEQ queue:

A JMSContext is created directly from the connection factory. The JMSContext interface is new in JMS 2.0 and replaces the separate Connection and Session objects in the JMS 1.1 API. The JMSContext implements the Java 7 java.lang.AutoCloseable interface. This means that because you create the JMSContext in a try-with-resources block, the close method is called automatically at the end of the block without the need to explicitly close it.

A JMSProducer is a replacement for the MessageProducer object in JMS 1.1. It allows message delivery options, headers, and properties to be configured. You can create it using the createProducer() method on the JMSContext. The putMDBQ() method in our sample shows how to use the JMSProducer to set message properties on a JMS message.

The readQ() method in our servlet is used to read the DEMO.SIMPLEQ queue, as shown in the following snippet:

The JMSContext is created in a try-with-resources block and obtains a connection from the underlying connection pool. When an application needs to receive messages, it uses the createConsumer() method to create a JMSConsumer object. The queue is then read in a loop until the maximum depth count is exceeded or no more data is returned.

The receiveBodyNoWait(String.class) method is called, which returns the JMS message body as a string if one is immediately available. Note that alternative versions of this method are available that block for a specified time-out period.

To test the servlet sample, download the code from the Git repository, cics-java-liberty-mq-jms, and then add the following elements to the Liberty server.xml in addition to the configuration for the previous MDB sample:

This tutorial has covered the basics of JMS usage with MQ in a CICS Liberty JVM server, including the following topics:

For more details on the technologies covered in this tutorial, see the Resources links in the upper right-hand column.

Acknowledgements: Thanks to fellow IBMers Matthew Leming and Pete Siddall of MQ development, and Andy Wharmby of CICS Development.