Java 9+ modularity: The theory and motivations behind modularity

Use the modular capabilities introduced in Java 9+ to write cleaner and better-architected code, libraries, and systems

Modularity, a turning point in Java

With the release of Java SE 9 came significant and new features and enhancements:

More on Project Coin: Project Coin was a proposal to determine what set of small language changes should be added to JDK 7 and included strings in switch, binary integral literals and underscores in numeric literals, multi-catch and more precise rethrow, improved type inference for generic instance creation, a try-with-resources statement, and simplified varargs method invocation.

But we can’t talk about Java 9 without discussing some of the significant features shipped with the Java SE 8 release:

So, I will be addressing some of the important features of Java 8 as well.

In this tutorial, I focus on the module system:

Introduction to the module system

Basically, how you write code was greatly influenced by Java SE 8. Java SE 8 brought functional programming to the language by introducing Lambda expressions, but how you package the code and interact with it more efficiently and scale it up and down is directly impacted by Java SE 9.

By bringing the application of the module system to the Java SE 9 platform:

Let’s have a look at Project Jigsaw’s development.

Java SE 9 in a historical perspective

Let’s put the Java 9 release into a historical perspective, because introducing modularity has been a long time coming:

As Paul Deitel chronicles in the article “Understanding Java 9 Modules“:

The Java SE Platform has been around since 1995. There are now approximately 10 million developers using it to build everything from small applications for resource-constrained devices — like those in the Internet of Things (IoT) and other embedded devices — to large-scale business-critical and mission-critical systems. There are massive amounts of legacy code out there, but until now, the Java platform has primarily been a monolithic one-size-fits-all solution. Over the years there have been various efforts geared to modularizing Java, but none is widely used.

Way back in 2006, we got Java SE 6. Compared with previous Java releases, it was fairly minor, with the most notable feature being the scripting engine API for scripting languages atop Java. There were more big plans, but the original owner of Java, Sun Microsystems, was unable to deliver on them because Java 6 was the last release led by Sun.

However, Sun did start JSR 277: Java Module System and JSR 294: Improved Modularity Support in the Java Programming Language in 2005 and 2006, respectively, with the view to add modularity to Java. These JSRs were in reaction to the OSGi specifications from the OSGi Alliance, which had developed a modularity solution for Java in 2000 and updated in multiple subsequent releases. Prior to JSRs 277 and 294, JSR 232: Mobile Operational Management and JSR 291: Dynamic Component Support for Java SE were both completed in 2006 and 2007, respectively, to bring the OSGi specifications into the JCP as modularity specifications for Java ME and Java SE, respectively. These JSRs were both based upon the OSGi Core Release 4 specification. But Sun did not want to use the OSGi technology and opted to pursue a different path in JSRs 277 and 294 which both ultimately failed and were withdrawn when JSR 376: Java Platform Module System (JPMS) later replaced them.

Oracle took over the reins around 2010, swiftly producing Java 7. It contained fewer new features than was anticipated and most of the additions were at a low level, such as new bytecode to support dynamic languages on the JVM.

Prior to Oracle acquiring Sun, Sun started Project Jigsaw in OpenJDK to work on adding modularity to Java SE in a design different from those in any of the JSRs mentioned above. Requirements discussions took place with key stakeholders, including the Eclipse Foundation and the OSGi community. Project Jigsaw was originally intended to be in Java 7 but was deferred to Java 8.

After Java 7, there was time and capacity for serious innovation again, but we still had to wait three years until Lambdas and Streams hit the scene with Java 8. As you know by now, these two concepts turned out to be hugely popular productivity boosters. But Project Jigsaw was deferred again and moved out to Java 9.

Then, for Java 9, we finally got a long-awaited feature that was planned for Java 7 and then for Java 8 but had been bumped twice: a module system for Java.

Unfortunately, the release of Java 9 had to be postponed several times because of setbacks in the module system design and implementation. At the start of Java 9 development, the previous Jigsaw requirements were replaced by a new set of requirements from Oracle and work on Project Jigsaw started anew. Finally, in September 2017, Java 9 was released with the JSR 376: Java Platform Module System (JPMS), based upon the Project Jigsaw work, as the marquee feature.

With the release of Java 9, Oracle has also indicated it wants to switch to a twice-a-year, time-based, measured release schedule for Java instead of doing feature-based releases and only shipping the release if those features are ready.

In the new world of Java releases, you’re going to get regular updates and if a feature isn’t ready, you’ll get to see it in the next release, which is always just six months away.

You’ve already seen this new release schedule strategy in action and it seems to be working well. The Java SE 11 release is the first long-term support (LTS) release after Java SE 8, and now you get Java 12 with the concept of a language feature — the new switch expression — in a preview state for the first time in Java history.

So that you can track the evolution of the JPMS and modularity in the Java ecosystem, here are the JEPs and JSRs that deal with the development of this technology in Java:

Why we need a Java module system

What are the problems in the current Java system that modularity can solve for the professional programmer?

JAR files, like rt.jar and other files, are so big that it is hard to use them in small devices. 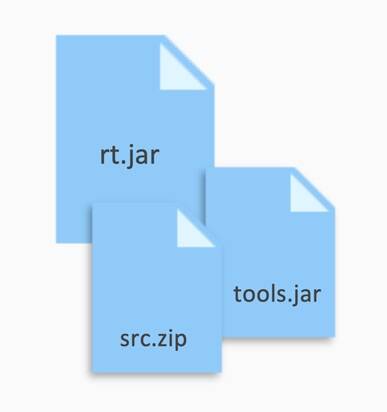 The JDK is too big and that makes it a bit tough to scale down to small devices. Three compact profile types have been introduced to solve this problem in Java SE 8: compact1, compact2, and compact3. However, they do not solve this problem because they are static and not customizable.

So, the question becomes, how does Java 9 solve such problems?

To solve the problems in the current system effectively, the answer is the JPMS in Java SE 9. The key goals the language developers hoped to achieve when modularizing the Java SE platform are:

Modularity allows you to explicitly declare dependencies between modules so that they are recognized both when the code compiles and when it is executed. The system reads through the list of dependencies so it can decide which modules your application will require.

This mechanism can improve platform security because attackers will have fewer classes to hack. Plus, modularity might help to structure your development effort, guiding you to more logical and more elegant design choices.

Java used to be like a basket that was filled with an enormous number of packages, so many that it was hard to keep them all straight. That didn’t help a language contributor concentrate on the important business at hand: developing, maintaining, and growing the platform.

In Java 9, the platform is grouped into 98 modules so that developers can build custom runtimes that only use the modules they need. For example, if you’re coding for a device that doesn’t support GUIs or your application doesn’t need security in this implementation, you could build a runtime that doesn’t include the GUI or security modules.

Strong encapsulation in Java 9 keeps the encapsulated internal APIs hidden from apps using the platform, unlike in Java 8 and further back. This is good because it gives increased security, but it might make migrating legacy code to Java 9 a difficult task.

By locating required types in specific modules and allowing this to be known, the JVM techniques for optimization are more effective in their mission to improve your application’s performance.

You can learn more about these topics in JSR 376: Java Platform Module System.

How JPSM fixes the problems

Remember the problems? Let’s talk about how Java 9 addresses solving those problems.

JEP 200: As you know, the JDK system in Java 8 was too big, so the language developers decided to divide the JDK into a set of modules that can be combined at compile, build, or runtime into a variety of configurations, including, but not limited to:

JEP 201: Current source code JAR files, especially rt.jar, are too big; in the case of rt.jar, it’s about 64 megabytes. That’s way too large for some devices to handle. JEP 201 proposes a new source code layout for the JDK, one in which the runtime is reorganized into modules that will enhance the build system to compile modules and enforce module boundaries at build time.

JEP 220: The main goal of this feature is to “restructure the JDK and JRE runtime images to accommodate modules and to improve performance, security, and maintainability.” The new format for stored class and resource files should be:

JEP 260: The goal of this feature is to make most of the JDK’s internal APIs inaccessible by default but leave a few critical, widely-used internal APIs accessible until supported replacements exist for all or most of their functionality.

JEP 261: This feature allows users to create their own modules to develop applications.

JEP 282: The main goal of this feature is to create a tool that can assemble and optimize a set of modules and their dependencies into a custom runtime image as defined in JEP 220; in other words, to build a tool that allows the user to generate a custom, modular runtime image.

I’ll discuss this feature in more detail in Part 5 of this series.

Let’s compare and contrast the JDK 9 folder structure with its predecessors.

The JDK 9 folder structure is different

You should already know what a JDK software folder contains. After installing the JDK 8 software, you see a couple of directories like bin, jre, lib, db, etc., and files like src.zip and javafx-src.zip in the Java Home folder.

The first thing you’ll notice is that the folder structure in JDK 9 has changed a bit.

The JDK 9 folder doesn’t contain the JRE. In JDK 9, the JRE is herded into a separate distribution folder, which was redundant and contained the same tools already in the bin folder; this increased the size of the JDK unnecessarily.

Other files and folders have been removed and turned into modules. The JDK 9 software contains a new folder called jmods. This folder contains a set of Java 9 compiled modules definitions. 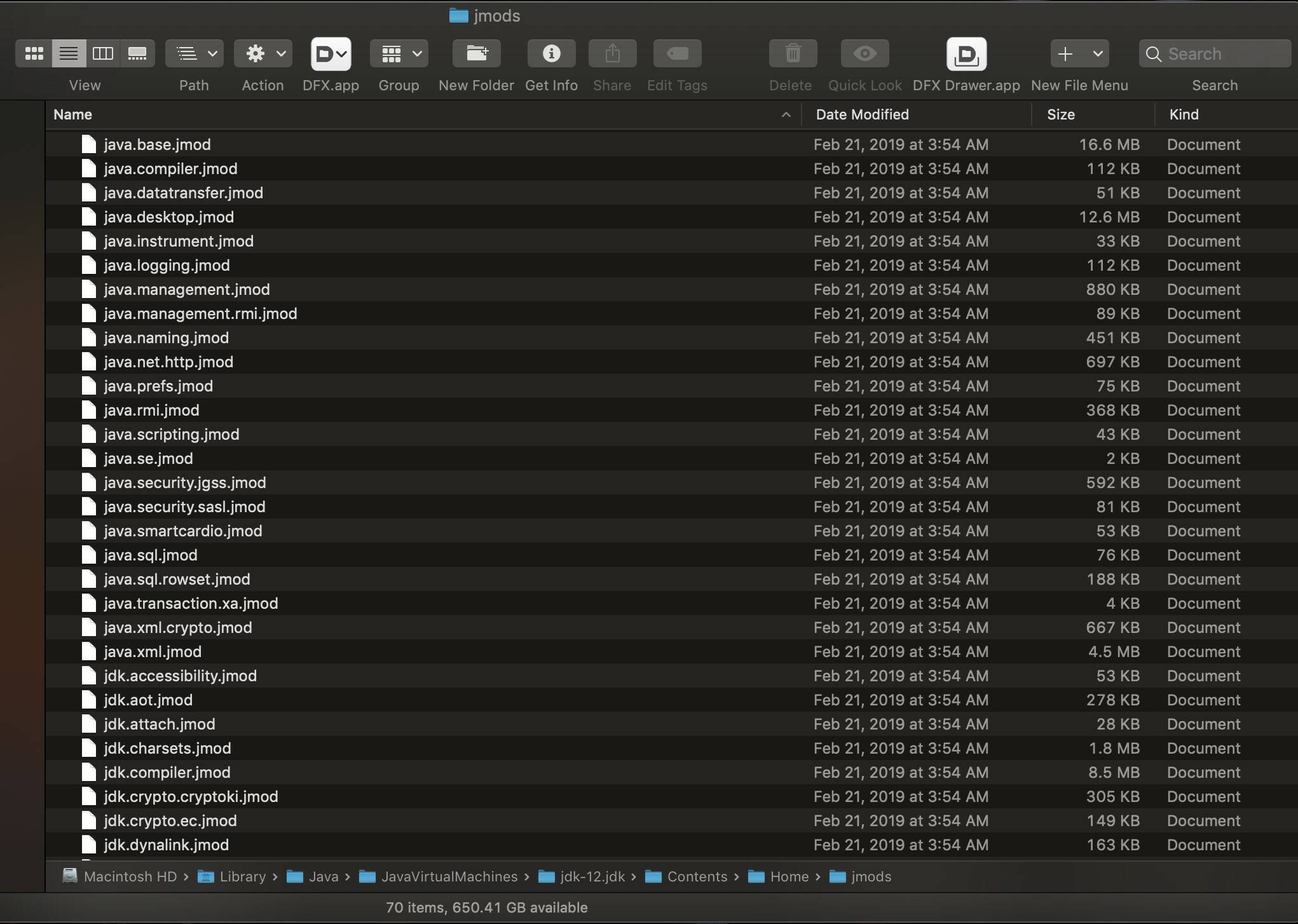 As per JEP 261, the new JMOD format goes beyond JAR files to include native code, configuration files, and other kinds of data that do not fit naturally, if at all, into JAR files. The final format of JMOD files is an open issue, but for now it is based on zip files.

As you saw in the previous image, the entire JDK has been divided into a set of modules. As a result, you can assemble a set according to your requirements either during compilation, build, or runtime into a variety of configurations. The following resources provide a full list of modules with their descriptions:

As Java evolves, you will notice a change into modules from version to version; some new modules will be added, some deprecated for future removal, while others modules will be removed completely.

In this tutorial, you’ve learned what the JPMS is and its long history, including the motivation behind the introduction of the module system into Java. I’ve explained the problems in the Java 8 and previous versions that modularity is designed to solve and showed you the tools and features that can solve the problems. Finally, I’ve highlighted the difference between the JDK structure of Java 8 and earlier JDKs and the new JDK 9 configuration.

In the next tutorial, I’ll dive deeper into module basics and rules.

Java licensing has changed, and you could be affected