Anatomy of the Linux file system

The Linux file system architecture is an interesting example of abstracting complexity. Using a common set of API functions, a large variety of file systems can be supported on a large variety of storage devices. Take, for example, the read function call, which allows some number of bytes to be read from a given file descriptor. The read function is unaware of file system types, such as ext3 or NFS. It is also unaware of the particular storage medium upon which the file system is mounted, such as AT Attachment Packet Interface (ATAPI) disk, Serial-Attached SCSI (SAS) disk, or Serial Advanced Technology Attachment (SATA) disk. Yet, when the read function is called for an open file, the data is returned as expected. This article explores how this is done and investigates the major structures of the Linux file system layer.

What is a file system?

I’ll start with an answer to the most basic question, the definition of a file system. A file system is an organization of data and metadata on a storage device. With a vague definition like that, you know that the code required to support this will be interesting. As I mentioned, there are many types of file systems and media. With all of this variation, you can expect that the Linux file system interface is implemented as a layered architecture, separating the user interface layer from the file system implementation from the drivers that manipulate the storage devices.

To illustrate the capabilities of the Linux file system layer (and the use of mount), create a file system in a file within the current file system. This is accomplished first by creating a file of a given size using dd (copy a file using /dev/zero as the source) — in other words, a file initialized with zeros, as shown in Listing 1.

You now have a file called file.img that’s 10MB. Use the losetup command to associate a loop device with the file (making it look like a block device instead of just a regular file within the file system):

With the file now appearing as a block device (represented by /dev/loop0), create a file system on the device with mke2fs. This command creates a new second ext2 file system of the defined size, as shown in Listing 2.

Listing 2. Creating an ext2 file system with the loop device

The file.img file, represented by the loop device (/dev/loop0), is now mounted to the mount point /mnt/point1 using the mount command. Note the specification of the file system as ext2. When mounted, you can treat this mount point as a new file system by doing using an ls command, as shown in Listing 3.

Listing 3. Creating a mount point and mounting the file system through the loop device

As shown in Listing 4, you can continue this process by creating a new file within the new mounted file system, associating it with a loop device, and creating another file system on it.

From this simple demonstration, it’s easy to see how powerful the Linux file system (and the loop device) can be. You can use this same approach to create encrypted file systems with the loop device on a file. This is useful to protect your data by transiently mounting your file using the loop device when needed.

While the majority of the file system code exists in the kernel (except for user-space file systems, which I’ll note later), the architecture shown in Figure 1 shows the relationships between the major file system- related components in both user space and the kernel.

The VFS is the primary interface to the underlying file systems. This component exports a set of interfaces and then abstracts them to the individual file systems, which may behave very differently from one another. Two caches exist for file system objects (inodes and dentries), which I’ll define shortly. Each provides a pool of recently-used file system objects.

Each individual file system implementation, such as ext2, JFS, and so on, exports a common set of interfaces that is used (and expected) by the VFS. The buffer cache buffers requests between the file systems and the block devices that they manipulate. For example, read and write requests to the underlying device drivers migrate through the buffer cache. This allows the requests to be cached there for faster access (rather than going back out to the physical device). The buffer cache is managed as a set of least recently used (LRU) lists. Note that you can use the sync command to flush the buffer cache out to the storage media (force all unwritten data out to the device drivers and, subsequently, to the storage device).

That’s the 20,000-foot view of the VFS and file system components. Now I’ll look at the major structures that implement this subsystem.

Linux views all file systems from the perspective of a common set of objects. These objects are the superblock, inode, dentry, and file. At the root of each file system is the superblock, which describes and maintains state for the file system. Every object that is managed within a file system (file or directory) is represented in Linux as an inode. The inode contains all the metadata to manage objects in the file system (including the operations that are possible on it). Another set of structures, called dentries, is used to translate between names and inodes, for which a directory cache exists to keep the most-recently used around. The dentry also maintains relationships between directories and files for traversing file systems. Finally, a VFS file represents an open file (keeps state for the open file such as the write offset, and so on).

The VFS acts as the root level of the file-system interface. The VFS keeps track of the currently-supported file systems, as well as those file systems that are currently mounted.

File systems can be dynamically added or removed from Linux using a set of registration functions. The kernel keeps a list of currently-supported file systems, which can be viewed from user space through the /proc file system. This virtual file also shows the devices currently associated with the file systems. To add a new file system to Linux, register_filesystem is called. This takes a single argument defining the reference to a file system structure (file_system_type), which defines the name of the file system, a set of attributes, and two superblock functions. A file system can also be unregistered.

Registering a new file system places the new file system and its pertinent information onto a file_systems list (see Figure 2 and linux/include/linux/mount.h). This list defines the file systems that can be supported. You can view this list by typing cat /proc/filesystems at the command line. 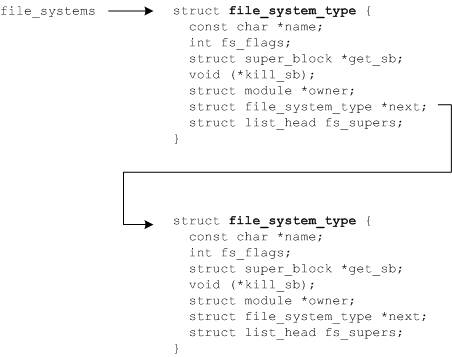 Another structure maintained in the VFS is the mounted file systems (see Figure 3). This provides the file systems that are currently mounted (see linux/include/linux/fs.h). This links to the superblock structure, which I’ll explore next. 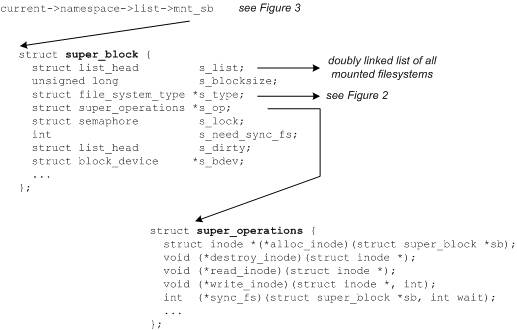 One important element of the superblock is a definition of the superblock operations. This structure defines the set of functions for managing inodes within the file system. For example, inodes can be allocated with alloc_inode or deleted with destroy_inode. You can read and write inodes with read_inode and write_inode or sync the file system with sync_fs. You can find the super_operations structure in ./linux/include/linux/fs.h. Each file system provides its own inode methods, which implement the operations and provide the common abstraction to the VFS layer.

The inode represents an object in the file system with a unique identifier. The individual file systems provide methods for translating a filename into a unique inode identifier and then to an inode reference. A portion of the inode structure is shown in Figure 5 along with a couple of the related structures. Note in particular the inode_operations and file_operations. Each of these structures refers to the individual operations that may be performed on the inode. For example, inode_operations define those operations that operate directly on the inode and file_operations refer to those methods related to files and directories (the standard system calls).

Figure 5. The inode structure and its associated operations 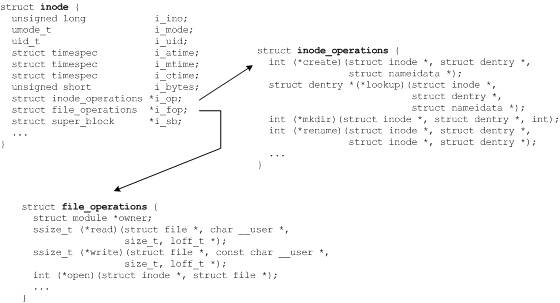 One final file system worth noting is the Filesystem in Userspace, or FUSE. This is an interesting project that allows you to route file system requests through the VFS back into user space. So if you’ve ever toyed with the idea of creating your own file system, this is a great way to start.

While the file system implementation is anything but trivial, it’s a great example of a scalable and extensible architecture. The file system architecture has evolved over the years but has successfully supported many different types of file systems and many types of target storage devices. Using a plug-in based architecture with multiple levels of function indirection, it will be interesting to watch the evolution of the Linux file system in the near future.