Migrating from OProfile to perf, and beyond

Map your favorite OProfile commands to their equivalent perf commands, then learn about perf's superpowers!

OProfile has been around for decades, and for some time was the workhorse of performance profiling on Linux®-based systems, and can serve the same role today. However, OProfile is not included in Red Hat Enterprise Linux (RHEL) 8 beta, and so it may be prudent for OProfile users to start considering alternative tools. Analogous projects which compare very favorably to OProfile in features, ease-of-use, and vitality of the community do exist. One such project is the Linux perf command. Until recently, when compared to OProfile, perf had some drawbacks such as lack of support for Java™ just-in-time (JIT) compiled programs and hardware event mnemonics, but these have been addressed in recent releases. This tutorial offers current OProfile users a roadmap for transitioning from OProfile to perf.

Both OProfile and perf currently use the same basic mechanism in the Linux kernel for enabling the event tracing: the perf_events infrastructure. Although it is primarily a user-space tool, the perf command is part of the Linux kernel from a development perspective, and being part of the Linux kernel has advantages and disadvantages. One possible advantage is that the code is more easily maintained because the code bases won’t drift apart over time. A disadvantage is that the version of perf is inherently tied to the version of the Linux kernel to a significant degree: getting access to new features in perf generally means getting a new kernel. Arguably, the community around the Linux perf command is more active and vibrant, and many new features are appearing in perf without analogs in OProfile.

Features supported by OProfile and perf

The following table shows the features supported by OProfile and perf.

OProfile examples and their perf analogs

Consider the following examples from http://oprofile.sourceforge.net/examples. In the following tables, for a given OProfile command (on the left), the equivalent perf command is provided (on the right).

Symbol summary for a single application

Symbol summary for a single application including libraries

Image summary for a single application

Call-graph output for a single application

Human-parsable event names are quite helpful for usability. It is arguably easier to profile for PM_DATA_FROM_L2MISS than 131326 or 0x200FE. The latter two (equivalent) numbers are the raw event code for PM_DATA_FROM_L2MISS (an IBM® POWER8® hardware event). All events are generally architecture-dependent and likely processor-generation-dependent. New processor generations often become available before the event mnemonics are incorporated into the supporting tools. Thus, it is useful to have the ability to use raw codes with the tools at hand. The perf command supports the use of raw event codes, making it potentially useful for profiling hardware events on newer processors or Linux distributions that do not have the required support yet. Support for IBM POWER® hardware event mnemonics was added to Linux 4.14 and has been backported to current enterprise Linux distributions (RHEL 7, SUSE 12, Ubuntu 18).

For POWER architecture, refer to the following raw event codes at:

The output of opgprof is gprof-formatted profiling data. perf has no analog.

oparchive and opimport are used to allow performance analysis to be completed on a different system than the one being measured, with no further need to access the measured system.

To analyze the data collected by perf on a different system (where the application is not installed, the operating system has different versions of libraries or a completely different processor architecture):

On the system under test:

Then, on the analysis system:

If instruction-level analysis is required, an objdump command from the system under test is required. Providing such a program is not trival, but certainly possible. One approach is to build a version of objdump that interprets the architecture and instructions of the system under test, but which runs natively on the analysis system. objdump is part of the GNU Binutils project at https://www.gnu.org/software/binutils/.

Another approach is to copy the objdump binary file and all of its dependencies to the analysis system, and run those in an emulated environment. Using the QEMU project‘s user-mode emulation is a way to perform the emulation. For example, on an IBM POWER processor-based system:

This section provides some of the additional features that are available with perf and not available with OProfile. It is not intended to be exhaustive, and perf is continually being enhanced. Some recent features (for example, eBPF) are not included here.

At certain key points in kernel code, events are raised by the software by way of explicit function calls such as:

You can record these events using the perf command.

Similar to software events, tracepoint events are embedded explicitly in kernel code. These events are exposed in the debugfs file system, which is commonly mounted at /sys/kernel/debug, and usually readable and thus usable only by the superuser. This directory hierarchy can be made world readable using the following command:

Software-defined tracepoints (SDTs) are predefined traceable points in user-mode code (applications and libraries) which can be enabled for tracing with the perf command.

To Enable software-defined tracepoints (SDTs) for a given DSO:

List of pre-defined events (to be used in -e):

To enable SDT as a true tracepoint:

Linux offers the capability to dynamically create tracepoints in user-space code (applications and libraries). These are called user probes or uprobes. User probes can be created anywhere in executable code, and are usually created at function entry points. Return points of functions are also commonly traced, and these are known as uretprobes.

To enable dynamic tracepoint for a DSO function [return from function][including a variable value]:

When creating user probes which include any variables (“$vars”), debugging information must be available. Many packages have corresponding debuginfo packages.

Metrics are arithmetic combinations of events. Given a metric, the perf command can automatically record the events required, compute, and display the metric.

To record and display metrics:

perf provides the capability to write scripts to process a recorded event stream.

To generate a sample script based on the given perf data, with template functions for each of the recorded events:

perf script --gen-script python produces a perf-script.py file containing template functions for each event in the perf.data file as shown in the following example:

perf report, without --stdio, will launch an interactive analysis tool.

Initially, the basic results are displayed:

Then, if a line is highlighted by moving the cursor with the arrow keys, and selected by pressing Enter, a menu (as shown below) is displayed.

This allows more selective and detailed analysis of the data.

perf can show the differences between two similar recordings, which can help to show the effect that code changes have.

perf kvm, when run on a KVM host, can record events for a specified guest, just for the host itself, or both. There are modes for record-and-report and live display (perf kvm top and perf kvm stat live).

For scheduling latencies and other properties:

To display a detailed scheduling trace:

To run a workload timing simulation:

To display a context switching outline, including the timing by when tasks begin to run, are paused, and are migrated from one CPU to another:

To display an analysis of individual scheduling events:

To generate the scheduling information graphic in SVG format (as output.svg by default): 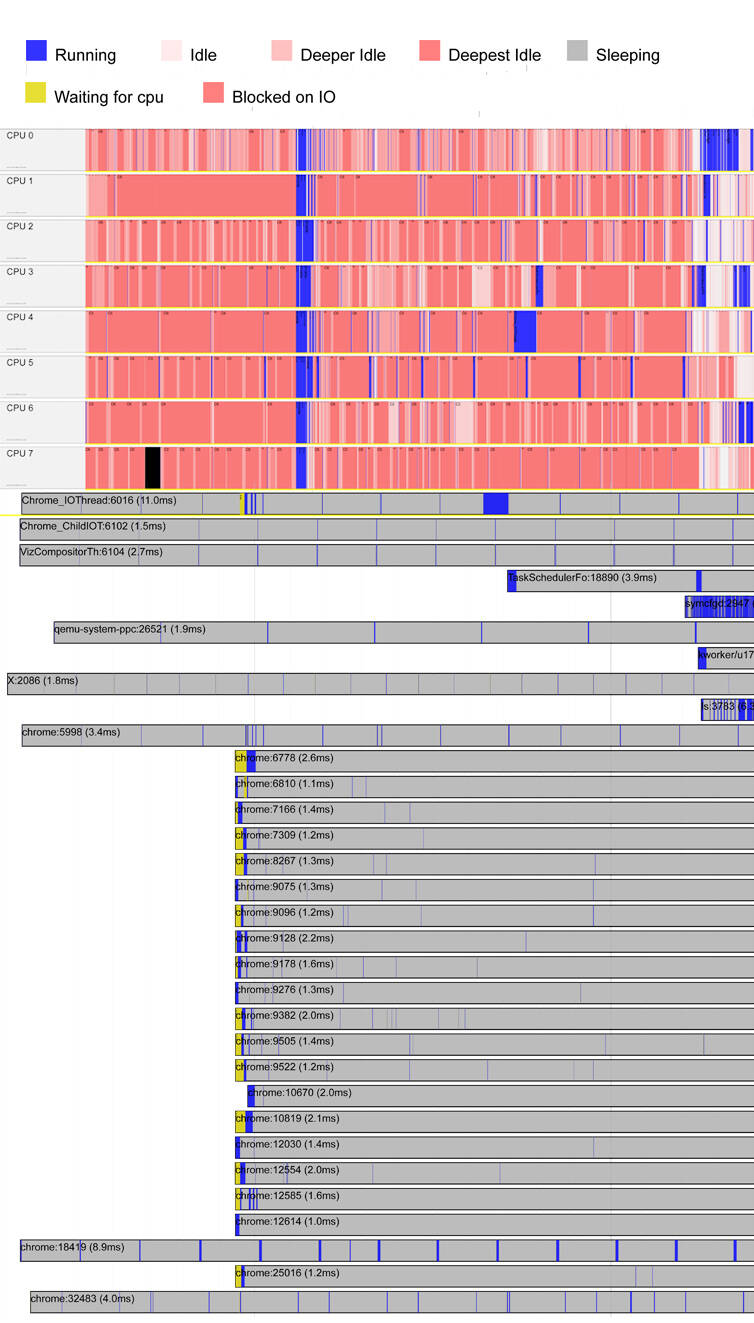 Observe when tasks are running, and on what CPU, as well as other scheduling-related events.

perf top, like the well-known top command that displays utilization information for tasks, will display live updates of the most active functions across a system. Closer analysis capabilities, as in perf report and perf annotate are available.

The Linux perf command is a powerful tool, being continually advanced by a vibrant community. It can readily serve as a replacement for the OProfile suite of tools.