Configure your queue for app connections

To see how IBM MQ works, you will be guided through creating and configuring a queue manager (server). Then, you will connect an application (client) to it.

After completing the tutorial, you will be able to send messages to and retrieve messages from a queue.

You can download, install, and run IBM MQ queue manager (server) in a variety of ways:

For MacOS, use MQ on Containers.

After completing this tutorial, you will understand these concepts:

This tutorial should take about 30 minutes.

If you’d rather watch a video to learn how to install MQ in a container, you can watch this one.

Important: In August 2021, Docker announced changes to their product subscription model. While Docker Desktop for MacOS and Windows remains free for certain users under the terms of Docker’s Personal tier, those users working in larger organizations and groups may be required to subscribe to one of Docker’s paid subscription tiers. These changes will take effect starting on January 31, 2022.

To install Docker, download Docker Community Edition, version 17.06 or later, from Docker Hub. Then, follow the instructions in the installation documentation to install Docker.

Docker images are generated in an OCI standard format and are compatible with Podman, an open source, Linux-native tool. (Read more about transitioning to Podman in this Red Hat Developer blog.) If you do not want to (or cannot) subscribe to one of Docker’s paid subscription tiers, you can use Podman as an alternative to complete this tutorial.

To install Podman, follow the instructions in the Podman installation documentation.

Step 2. Get the MQ in Docker image

Containers are run from images and images are built from a specification listed in a Dockerfile. We will use a pre-built IBM MQ server image from Docker Hub so that we can just run our container without having to build an image. We will end up with a working MQ installation and a queue manager that is pre-configured with objects ready for developers to work with.

Step 3. Run the container from the image

Now that the MQ server image is in your local Docker repository, you can run the container to stand up MQ in RHEL in a container.

Volumes are attached to containers when they are run and persist after the container is deleted. When you run a new container you can attach an existing volume and later reuse your queue manager and queue data.

Your queue manager has been set up with some simple default configuration to help you connect your first client application.

We’ve added parameters to the docker run command, for example to accept the license for IBM MQ Advanced for developers and name the queue manager “QM1” where our queue will live.

Because MQ is running inside a container, it would be isolated from the rest of the world, so we’ve opened a couple of ports that MQ uses.

The queue manager’s listener listens on port 1414 for incoming connections and port 9443 is used by MQ console.

The MQ demo client application will use the listener port and MQ Console dashboard can be seen in your browser on port 9443.

Give the container a moment to start, and then check that it’s running:

To access this queue manager, you’ll be connecting over TCP/IP, which is why you needed to expose the port 1414.

Make a note of your own container ID, and use it to get command line access inside the container. For example:

You can display the MQ installation and data paths by running the dspmqver command (display MQ version) in your command line interface. 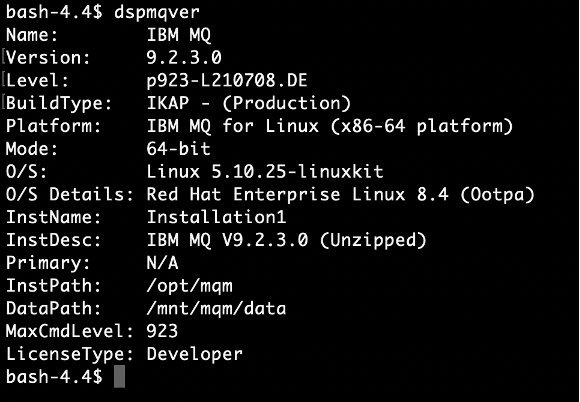 You can display your running queue managers using the dspmq command.

To come out of the Docker container and return to your command line, type exit and press Enter.

What you’ve done so far

You downloaded the pre-built Docker image and ran the container to get MQ running on RHEL. The IBM MQ objects and permissions that the client applications need to connect to a queue manager and to be able to put and get messages to and from the queue are created automatically. Docker and MQ are using your host computer resources and connectivity.

Inside the container, the MQ installation on RHEL has the following objects:

All the MQ objects and permissions that the client application needs are created and configured when you run the MQ server container. 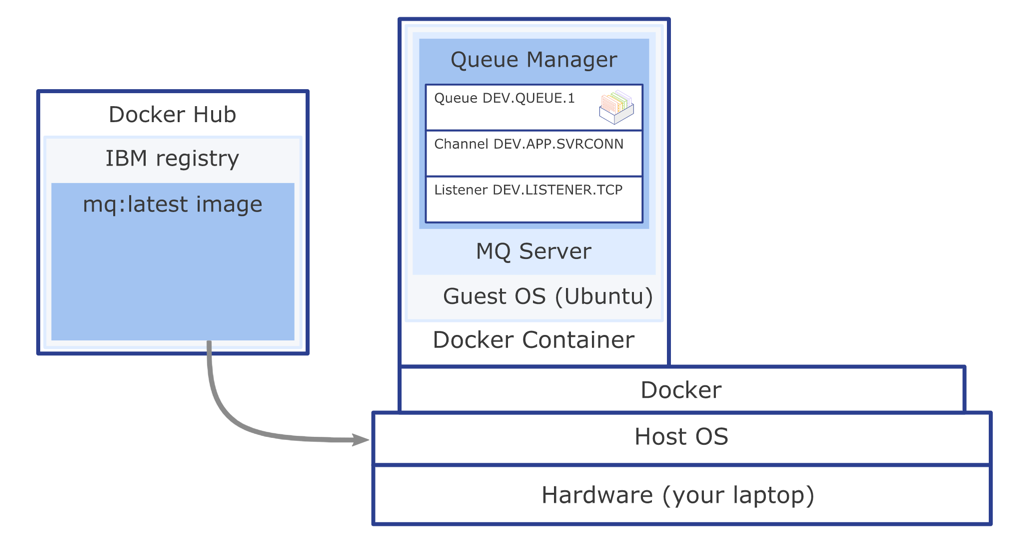 In this tutorial, you stood up an MQ queue manager in a container, which came with a preset developer configuration to allow incoming client connections.

When you start developing your own client applications to connect to the queue manager, you’ll follow these steps:

In IBM MQ, the queue manager is effectively the server part of the system, and applications that connect to it are clients.

Usually it is the administrators that look after the MQ server where all the MQ objects are defined and the routing of messages happens. Client applications are created by developers and IBM MQ provides client libraries that developers must include in their applications. These libraries, also called MQ clients, address and use the MQ objects that admins have set up on the MQ server side. In more complex scenarios, the MQ libraries do most of the heavy messaging work for you, so you just have to learn how to use them.

Configuration is needed on both the server and the client sides for the messaging to work.