Get a grip on your JavaScript application state

State management is one of the most difficult aspects of software development, making state mismanagement the source of nearly all bugs. This series explores Redux, a predictable state container for JavaScript applications. Redux not only aids in state management but also makes it straightforward to implement advanced features such as infinite undo/redo and live-editing time travel.

Although Redux came from the React community, it’s not tied to React. You can use Redux with or without a JavaScript framework such as React, Angular, Backbone, or Cycle.js. In this first installment, you start with Redux basics and learn how to use it as a stand-alone state container; then you segue into using Redux with React. The next few installments address more-advanced Redux scenarios, and in the final installment you learn about using Redux with Angular.


Install Redux by cloning the GitHub repository or via npm: npm install redux

Redux is a simplified implementation of Facebook’s Flux architecture. (Redux is both an English word that means “returned” and a portmanteau of reducer + flux.) Flux is essentially Model-View-Controller (MVC) done right, but Flux introduces a fair amount of complexity. Redux lessens that complexity by borrowing the concept of reducers from Elm— a powerful reactive functional programming language based on immutable data structures and pure functions. Pure functions are functions that have no side effects, and Redux reducers are pure functions that compute application state.

Redux is founded on three principles:

Application state is stored in a single object

With Redux, you can’t modify application state. Instead, you replace the existing state with a new state. The new state is specified by actions, which are (also immutable) JavaScript objects that describe state changes.

Encapsulation of state changes in immutable objects has many advantages. One of those advantages, as you’ll see in this series, is the ability to implement endless undo and redo — in effect, a sort of time machine. Actions are also executed in a strict order, so no race conditions occur.

Reducers are pure JavaScript functions that:

Because they’re pure functions, reducers have no side effects — so they’re easy to read, test, and debug. And you can compose reducers, which makes it easy to implement simple reducers that are concerned with only a portion of the overall application state.

Because application state is immutable and because reducers are pure functions with no side effects, Redux is a predictable state container: Given any state and any action, you can predict the next state of the application with absolute certainty. That predictable element of Redux is the killer feature that opens the door to infinite undo/redo and live-editing time travel.

Next up are a couple of examples that illustrate the fundamentals of Redux.

Actions, reducers, and the store

In Figure 1, the code for a simple Redux example — a traffic light simulator — runs in the TextMate text editor. The TextMate-generated tooltip in the image shows the application’s output, which displays the app’s state (STOP, CAUTION, or GO). 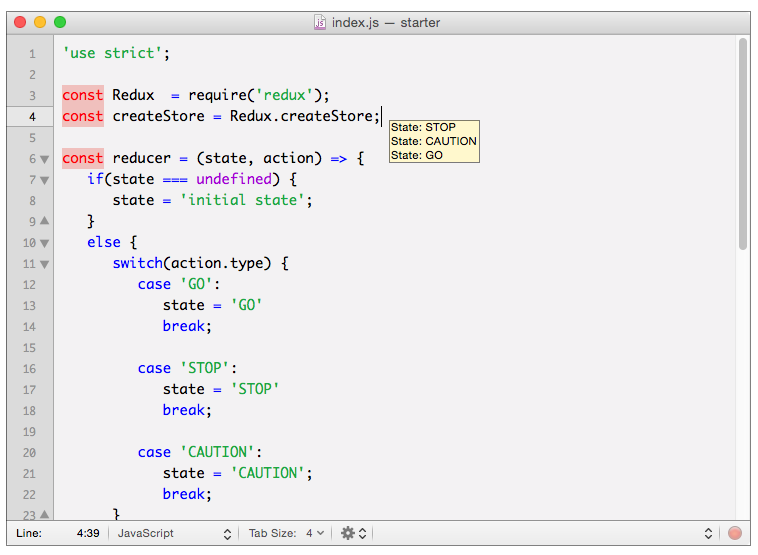 The code in Figure 1 begins by requiring Redux and creating the Redux store:

Listing 1. The reducer for the traffic light app

Next, the code defines three action objects, one for each state, as shown in Listing 2.

Listing 2. The actions for traffic light

Finally, as shown in Listing 3, the application dispatches actions, obtaining a reference to the current state with the Redux store’s getState() method and printing the state’s value to the console.

When you dispatch an action by using the Redux store.dispatch() function, Redux passes the action, in addition to the current state, to the application’s reducer. The reducer creates a new state and returns it to Redux. That flow is depicted in Figure 2. 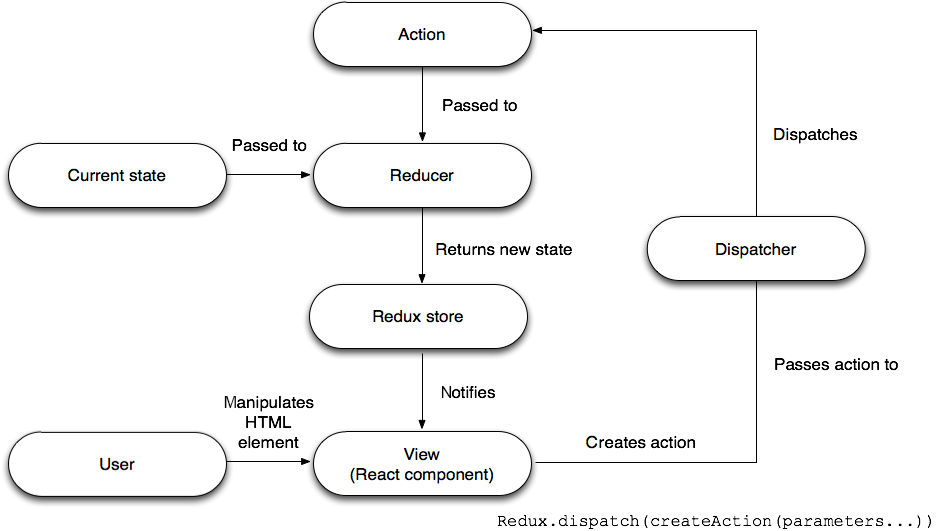 In Figure 2, the action starts with the call to Redux.dispatch() in the diagram’s lower-right corner. The Redux dispatcher dispatches the action to the application’s reducer, passing the current state, along with the action, to the reducer. The reducer creates the new state and returns it to Redux. Finally, Redux notifies any view components that state has changed, causing the application to repaint. Redux notifies view components, such as React or Angular components, about state changes through framework-specific bindings.

The Redux overall API is simple, consisting of only five top-level functions (one of which, Redux.createStore(), you already know about):

With the Redux applyMiddleware() function, you can extend Redux through middleware that intercepts dispatch calls. That handy facility makes it possible to implement all kinds of cross-cutting concerns, from logging to asynchronous actions.

That’s all there is to the Redux API.

Now that you know how to use Redux without a framework, you’re ready learn how to use it with React.

The traffic light application shown in Figure 3 uses the same state, reducer, and actions as the previous version — but in this case it’s a React application. 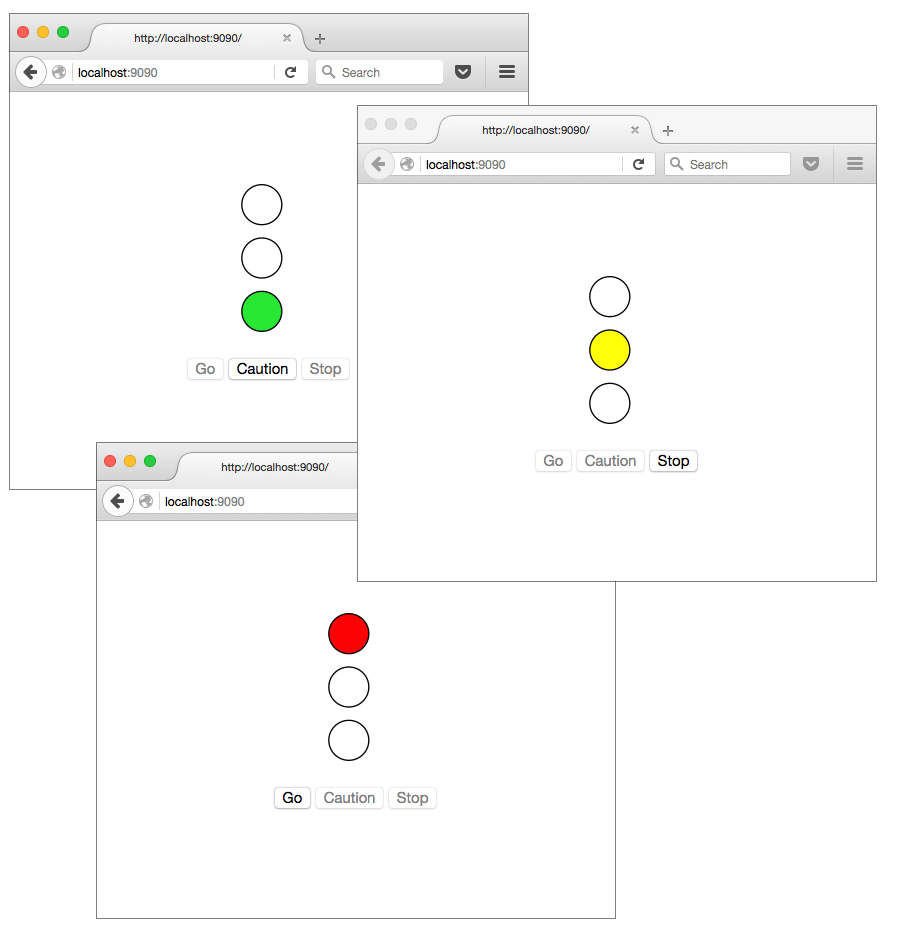 The App component in turn imports and renders two other components —Stoplight and the row of Buttons— and passes the Redux store to these child components.

Stoplight, which is a React stateless functional component, renders SVG circles whose color depends on the application’s state. The component obtains the state from the store’s getState() method and subsequently uses one of three helper methods to turn the state into a color.

By virtue of the call to the Redux store’s subscribe() method in Listing 4, React renders the traffic light when the Redux state changes. Those state changes are initiated by the application’s buttons. In Listing 7 — the code for the Buttons component — you can see how the buttons initiate state changes.

When a button is rendered, it obtains a reference to the application state by calling the Redux store’s getState() method. The Buttons component then uses the state to configure the disabled state of the buttons.

When the user clicks a button, the button’s onClick() callback calls the Redux store’s dispatch() method, passing an appropriate action.

Compare Listing 8 to Listing 4, and you can see that the code no longer subscribes to the Redux store at the application level.

Listing 9 is a revised Stoplight component that implements componentWillMount(). That method subscribes to the Redux store and calls the component’s forceUpdate() method when the store changes.

Listing 10 shows a revised Buttons component that’s undergone a similar revision by implementing componentWillMount() to subscribe to the Redux store.

Managing state is critical to any nontrivial application. Although state management might not be a glamorous topic, Redux — with 20,000 stars and 2,700 forks on GitHub at the time this article was written — is one of the most popular JavaScript libraries. The reason for its popularity is not only that Redux manages state but also that it does so predictably using immutable data and pure functions. That predictability makes it easy to implement a certain category of features, such as infinite undo/redo, that otherwise are typically arduous undertakings.

In this installment, you saw how to use Redux stand-alone and how to use it with React. The next installment goes deeper into using Redux with React and begins to explore advanced Redux features.