In Part 2 of this series, “Using Redux with React,” you explored use of the react-redux bindings to make the Redux store available to all of the React components in a React application’s component hierarchy. You also saw how to implement action creators, and how to separate container components that automatically connect to the Redux store from presentation components that display information based on the current state.

In this third installment, I continue building the book-search application, which uses Redux for state management. The application code is React-specific, but regardless of your application framework or lack thereof, you’ll learn how to use three additional advanced aspects of Redux:

The book-search app in review

With the book-search application, shown in Figure 1, you search for books by topic via the Google Books search API. Each search results in 10 or fewer books for the current topic, and the cover of each book is displayed. The cover thumbnails are links that take you to book details.

What’s of interest isn’t the search results, but how the application maintains state. Perhaps even more interesting is the app’s history component, with which users can move back and forth through the application’s state. All the while, the application displays the current state at the bottom of the page.

Recall from Part 2 that the app’s starting point looks like Figure 2.

Figure 2. The starting point for the book-search app

Listing 1 (identical to Listing 7 in Part 2 and repeated here for convenience) shows the application’s entry-point code.

The Provider component — part of the react-redux bindings — makes all of its properties available to any components inside the Provider tag body — in this case, a single property: the Redux store.

As you can see in Listing 1, the application’s entry point imports the store, specifying it as a property of the Provider component. The Redux store is created and exported in store.js, which consists in its entirety of:

The store.js code creates the Redux store by calling Redux.createStore(). The application passes the requisite reducer to createStore().

Notice that the reducer exported from reducers.js is named reducers with an s, instead of reducer— because that reducer is actually a combination of reducers.

Ultimately, the state for the finished book-search application will contain the following information:

Recall that state in a Redux application is stored in a single JavaScript object. The state for the final book-search application will have four properties corresponding to the four pieces of information in the preceding list:

Also recall that Redux applications, besides having exactly one object for state, have exactly one reducer for that state. However, for nontrivial applications, it quickly becomes unwieldy to maintain a single reducer function that creates application state. The code would be more readable, maintainable, and extensible if it had four reducers, one for each piece of state. The good news is that you can use the combineReducers() function to combine any number of reducers into a single reducer.

Figure 3 shows the nascent version of the book-search application stopped in the debugger after a state change. 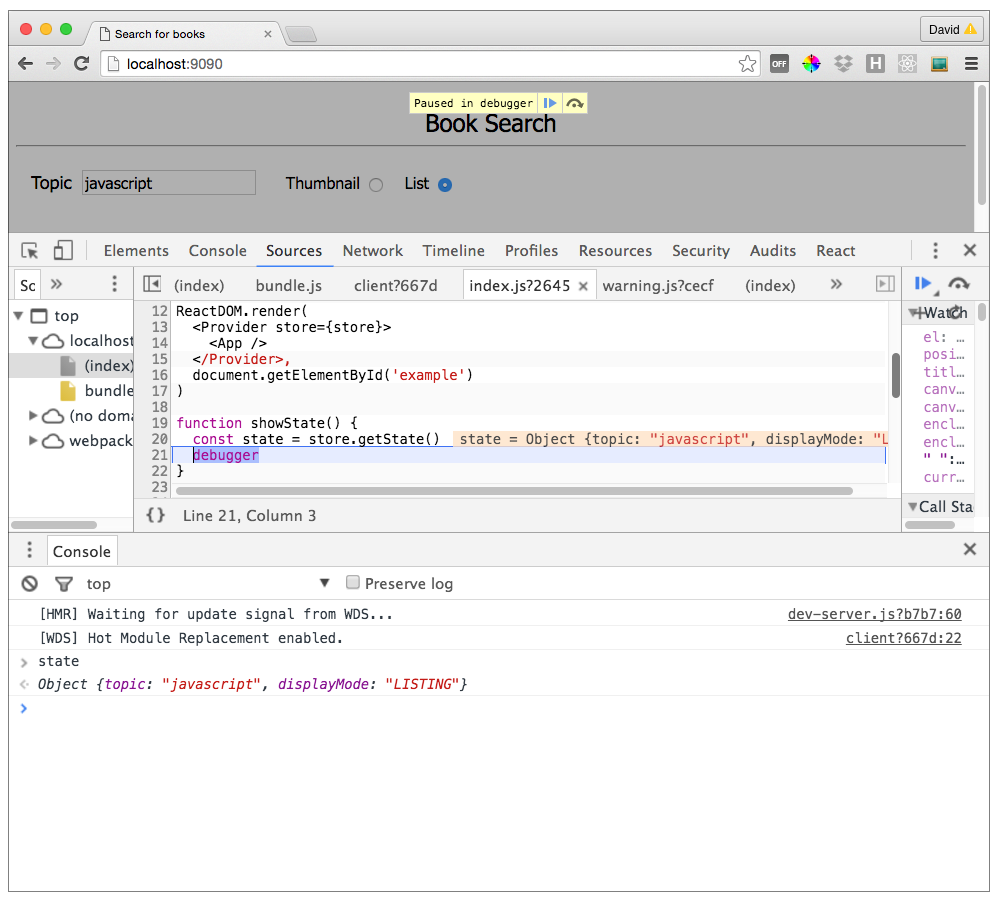 In the debugger’s console, you can see the state of the application, which for the moment is an object with two of the four properties that I listed previously: topic and displayMode. Each of those properties comes from a separate reducer that Redux combines into one, as shown in Listing 2.

Recall that when you dispatch an action by calling the Redux dispatch() function, Redux calls the application’s reducer function, passing the current state and the action. Actions, which specify a new state, typically have a type. In Listing 2, the action types are SET_TOPIC and SET_DISPLAY_MODE. Actions of the SET_TOPIC type have a topic property, and actions of the SET_DISPLAY_MODE type have a displayMode property, each specifying its new state. If you send an action to a reducer, and the reducer isn’t interested — for instance, you send a SET_DISPLAY_MODE action to the topic reducer — the reducer returns the current state, unchanged.

Later in this series, I’ll implement the book-search application’s other two reducers and add them to the state object passed to combineReducers().

Now that you’ve seen how to combine reducers, I’ll take you on a short detour to examine the application’s components

The application, represented by the App component, is shown in Listing 3.

As is often case for React components that represent an entire application, the App component in Listing 3 simply contains other components — in this case, a title, a horizontal rule, and a controls container component.

The controls component for the book-search application is likewise split into two components. Listing 4 shows the code for the connected container.

The controls container doesn’t have any dispatch functionality to map to the properties of the Controls stateless component, so it passes a null value as the second argument to the Redux connect() function.

Listing 5 shows the code for the corresponding stateless component.

Listing 6 shows the code for the container component for the topic selector.

Like all Redux container components, the TopicSelectorContainer maps state and dispatch functionality to the properties of its associated stateless component. In this case, the topic selector container maps the topic and a function that sets the topic.

Listing 7 shows the code for the topic selector stateless component.

The topic selector stateless component contains a prompt and a text field. When React mounts the component, the component’s componentDidMount() method gives the text field focus and places the cursor at the end of the text.

Listing 8 shows the container component for the display mode.

The display mode container doesn’t map state, but it does map two dispatch functions: setListing() and setThumbnail(), which dispatch actions that set the application’s display mode to either listing or thumbnail.

The current initial implementation of the book-search application illustrates combining reducers and implementing action creators. Next, you’ll see how to implement asynchronous actions with Redux and React.

Figure 4 shows the next version of the book-search application. 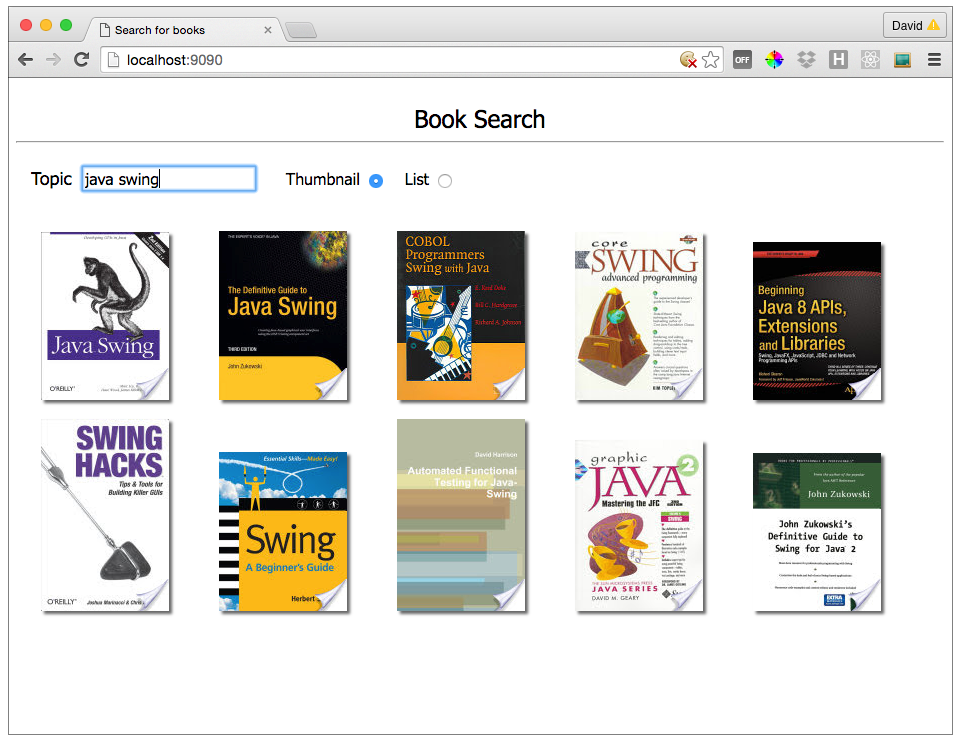 As you know from Part 1, the book thumbnails shown in Figure 4 come from the Google Books API. By querying the googleapis.com URL directly in a browser — for example, typing http://www.googleapis.com/v11/volumes/?q=javascript as the web address — you can get the query results in JSON format, as shown in Figure 5.

Figure 5. Searching for books with the Google Books REST API 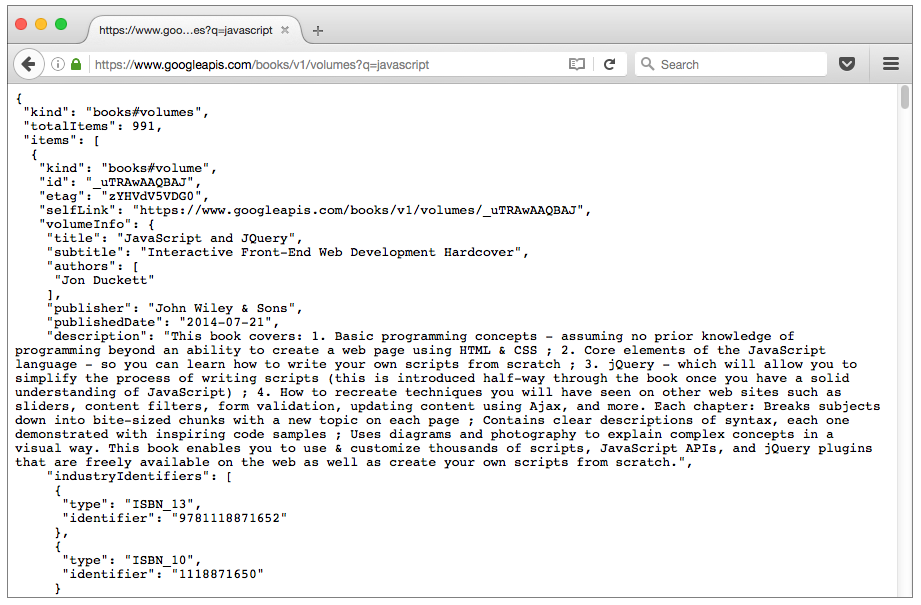 All of the app’s actions are currently simple objects. For an asynchronous action, instead of an object I want a function that in turn dispatches actions as the asynchronous request progresses.

Listing 10 shows the updated entry point of the book-search application.

The only difference between Listing 10 and the previous version of the application’s entry point is the dispatching of the fetch-books action. That action’s creator is the fetchBooks() function, shown in Listing 11.

The sixth fetch action creator —fetchBooks()— returns a function instead of an object. That function, shown in Listing 12, uses the JavaScript fetch API to fetch books, but — more important— notice that it dispatches the other fetch actions at the appropriate points in time.

The fetching actions, like all Redux actions, are processed (reduced) by a reducer. The application combines that reducer with the display mode and topic reducers.

Listing 13 shows a partial listing of reducers.js, showing how the fetch reducer handles the fetching actions.

To recap what I’ve just done:

I implemented a fetch action creator that returns a function, instead of an object, as is the case for most action creators. That function asynchronously fetches books using the Google Books API, and at various stages of the asynchronous fetch, it dispatches other actions by creating the actions with an action creator and dispatching it with the Redux dispatch() function.

Because Redux doesn’t support actions that are functions, I need to teach it to do so — by implementing Redux middleware.

As you know, to change application state with Redux, you dispatch actions. In response to an action dispatch, Redux invokes the application’s reducer, sending it the current state and the action. The reducer subsequently returns the new state.

Fortunately, Redux provides a hook between dispatching actions and invoking the reducer. That hook is known as middleware, and applying it is simply a matter of calling Redux’s applyMiddleware() function.

Recall from Part 1 that applyMiddleware() is a one of the five top-level Redux functions. You use applyMiddleware() to extend Redux through third-party middleware that intercepts dispatch calls. You can use this facility to implement many kinds of cross-cutting concerns — for example, logging, authentication, authorization, or collection of performance metrics — before you handle the main execution of the task.

I’ll start by showing you how to use existing helpful middleware in the book-search app, and then I’ll show you how to roll your own.

The redux-thunk middleware does exactly what I need in the book-search application — implement actions as functions in addition to plain JavaScript objects. You can install it with npm install redux-thunk.

Redux middleware is easy to use, as you can see from Listing 14. Now I’ll show you how to implement your own middleware.

In Listing 15, I replace redux-thunk with custom middleware.

Listing 16 shows the implementation of that custom middleware.

Arrow functions make the implementation more pleasant to look at, although not necessarily easier to understand. Listing 17 shows the Listing 16 code rewritten with arrow functions.

Now that you know the mechanics of implementing Redux middleware, take a look at the implementation of the thunk middleware in Listing 16. Thanks to the magic of JavaScript closures, middleware functions have access to store (the Redux store), dispatch (the Redux dispatch() function), and action (the action that you’re about to dispatch).

Redux applications change state by dispatching actions via the Redux dispatch() function. The dispatch() function, as its name implies, dispatches the action to the application’s reducer, which creates a new application state. In this installment, you saw how to tap into that lifecycle and extend how Redux works by implementing Redux middleware that enables Redux to process actions that are functions — a handy facility for nearly all asynchronous actions.

In the next installment in this series, I show you how to implement time travel — at least from the perspective of your application’s state — with Redux.