Application developers are increasingly being asked to open up new channels or new audiences or to discover new more innovative ways for existing customers to engage with our services. Today’s applications are typically directly engaging with our customers as individuals, across multiple channels simultaneously.

Developers must focus more on the customer experience:

To deliver these modern applications, application developers need to be able to act quickly, and autonomously, to satisfy the needs of a fast-moving market. Especially when it comes to accessing the enterprise’s data.

Their core requirements for modern applications include:

In this article, we discuss techniques to bring the data closer to the consuming applications as local projections. While the concepts we present are not new, the use of event streaming technology to propagate the data is better suited to modern cloud-native applications. Furthermore, we will discuss how the event stream projects pattern provides developers with further opportunities such as a real-time notification, immutable log, time travel, event processing, and retrospective analytics, and it also improves diagnostics and testing.

The techniques we describe in this article are conceptually similar to the concepts of event sourcing and CQRS, which have been niche patterns in the application space for a while but are becoming more commonplace. What we are proposing is using similar techniques, but at the enterprise scale. There are challenges and subtleties to be aware of when scaling these patterns up to the enterprise as proposed in this article. We will discuss these issues and recommend common practices.

The challenge of directly accessing data within existing systems

It is tempting to think that all we need to do to enable a user interface is to gain access to backend systems is to find a way to expose the data directly via a modern RESTful API. This approach works from a basic functional point of view, and it might be relatively straightforward once you find a mechanism for transforming between the back-end protocols or data format and the exposed API. This approach was popularized back in the early 2000s, and it has been iterated on many times as more sophisticated tooling and standards have made it progressively easier to do.

However, these direct synchronous calls that provide an API wrapper around the back-end system have a number of challenges. These issues become increasingly apparent as higher intensity workloads come along, as is typical through digital transformation: 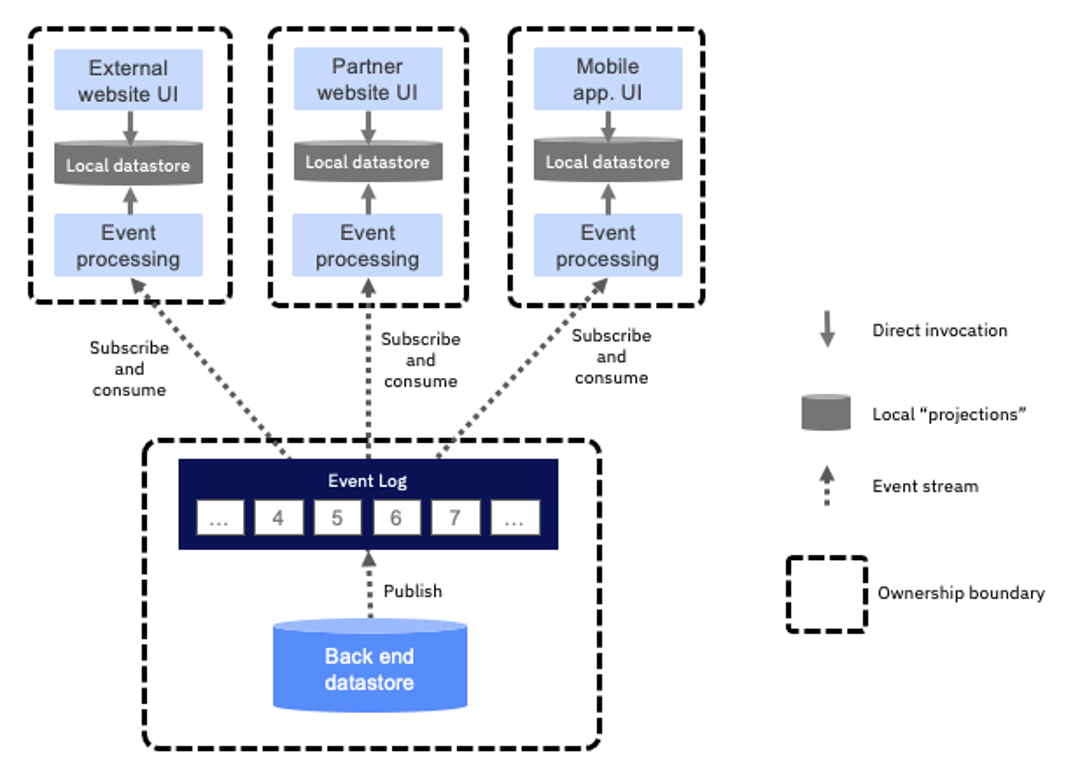 Put simplistically, event stream projections can be described as follows:

Apache Kafka is one of the most common event streaming technologies in use today. While this article will not go into implementation detail, it may help to take a quick look at which features of Kafka we might use to implement the event stream projections pattern:

The scope of the event sourcing and CQRS patterns is generally within a single application context. With event stream projections, we expand the pattern to a broader enterprise-wide scope.

Clearly there are subtleties when working at this enterprise scope, which need to be considered:

These and other considerations must be carefully considered to ensure the pattern can scale successfully.

We have described the simplest possible implementation, and the purpose of this article is just to introduce the core concepts. You can consider many interesting extensions to this pattern, such as:

How are event stream projections different from other existing approaches?

The idea of having local copies of the data from a back end system to improve latency and availability are hardly new. It is the fundamental premise techniques such as caching, data replication, data warehousing and aspects of big data. Let’s briefly explore some of those to see how event stream projections differs.

The most obvious example of a local copy of data is a cache. Caching is a broad topic. A cache can exist at many (even multiple) different layers in the architecture, and can be populated and refreshed through a wide variety of techniques. Most readers are likely to be familiar with one or more forms of cache so we will not define them here.

Our projection is undoubtedly a form of cache. However, there is one key differentiating factor. The presence of the event stream history enables the data model of the projection to be defined, and indeed re-defined at will, by the consuming application. A new projection can always be re-constructed from the event stream.

Replication technologies have existed for almost as long as databases. These technologies enable the creation and synchronization of an exact replica in another location. Exact replicas are more likely to be a solution for improving regional latency issues or to enable disaster recovery.

The replication process is typically created and owned by a specialist team rather than by the receiving application. If a different data model is required, that team must do significant up-front modeling requiring negotiations with this separate team, which reduces overall productivity. In contrast, event stream projections are implemented and maintained by the application team in their language or runtime. They can choose (and amend) the target data model and pick whatever type of data store best suits their needs.

Data replication techniques often have an element of batch processing (for example, extract transform load) to enable efficiency with the large datasets being replicated. This can result in the data in the replica becoming significantly out of date while waiting for the next batch run to complete. Event stream projections, in contrast, are near real time, updating the local data store shortly after changes occur at the back end. In an optimized case, the discrepancy could be sub-second.

Replicas tend to breed chains of replicas. It might be hard to update the original replication due to access restrictions, so it often turns out to be easier to create a further replica from the one you already have. Sometimes it’s expedience or sometimes it’s to keep load away from the back-end system, but often it’s because the people involved are not even aware where the data originates. These replication chains can dramatically increase the propagation times for data, and the overall system becomes brittle as failures in the early integrations cause cascading failures further along the chain which are harder to preempt, diagnose and rectify. In contrast, the event streams that are created for projections are designed for reuse, and the technologies involved (such as Kafka) are optimized for large numbers of consumers, so when new projections are required, it makes more sense to go back to the original reusable event stream than to copy from an application-owned replica.

An extension of data replication takes us to the more formal secondary storage techniques, such as data warehouses, data lakes, and other big data alternatives. In these storage options, the data is siphoned off, typically for the purpose of large-scale analytics and reporting. They require significant infrastructure, resource and planning. There is no question that these techniques remain essential, and indeed may be the only way to resolve some use cases. However, event stream projections enable a much more lightweight and application-owned starting point to explore consumer data requirements. Furthermore, if we start by implementing event stream projections, we can later expand the use of the event stream to populate more formal secondary big data stores as the requirements mature and warrant the extra work.

However, we have deliberately avoided using those terms so far because there are some important differences in what we are describing with this pattern:

Let’s look back at our original requirements and see how event stream projections addresses them.

Central to all these benefits of event stream projections is the clear separation of ownership promoted between providers and consumers, which is provided by the use of an event stream. This separation reinforces the point that the pattern is operating at an enterprise scale, with the provider and consumer each in different parts of the organization. The provider’s only responsibility is to make events available in a stream. The consumer then takes on the transformation, scalability, availability, resilience, and data currency. In the past, we might not have wanted to push these responsibilities to consumers, and preferred to provide a one-size-fits-all, centralized capability, catering to the high watermark of all requirements. With the increasing diversity of needs from consumer applications, and the increased simplicity of provisioning and scaling their own infrastructure, consuming applications now prefer the increased autonomy rather than being tied to the release cycle of a centralized infrastructure.

We’ve been keen to articulate the benefits of this pattern, but it is only fair and balanced to consider some of the potential challenges too. Here are some common adoption considerations.

Capitalizing on the event history

We’ve focused primarily so far on how event sourcing enables us to bring a copy of the data close to the front-end application and its user interface, and the performance and availability benefits of that.

However, the above are only the benefits directly associated with data access. There are many more things that event streams bring to the table. Event streams implementations such as Kafka, have an event history, such that consumers of events can not only receive new events but also access past events. This brings us a number of new opportunities:

Don’t be tempted to over reach in the early stages.

Event stream projections are an enterprise scale extension of known application patterns. They provide a powerful alternative for accessing data compared to both direct access and batch replication. Projections provide potential benefits in many areas including productivity and robustness and the presence of an event history opens up new possibilities for innovation.

Success is dependent on more than just the simple introduction of a technology such as Kafka. Implementing this pattern at enterprise scale needs careful design and a recognition of the enterprise scale considerations.

An introduction to event sourcing