This article provides an in-depth look at operators, starting with a review of the operator structure. We use aspects of how a Kubernetes cluster works to highlight how you can extend your knowledge of Kubernetes easily to operators. This article builds on the concepts explained in the Introduction to Operators article.

A basic operator consists of the components depicted in this diagram: 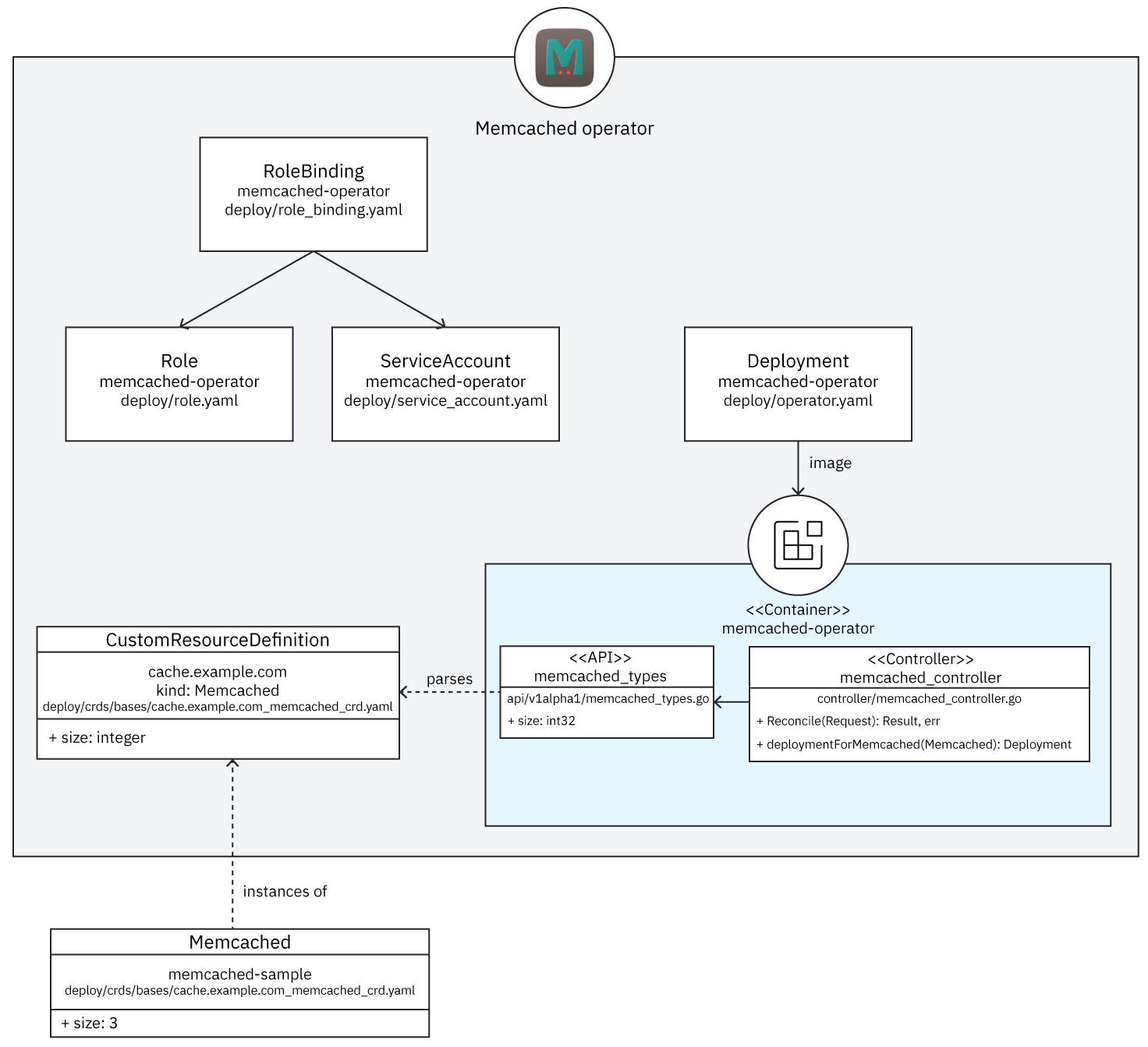 The following components form the three main parts of an operator:

A particular operator can be much more complex, but it will still contain this basic structure.

Let’s review the highlights of how Kubernetes works, so we can relate it to how operators work. A Kubernetes cluster consists of a control plan, worker nodes, and a cloud provider API, as shown in this diagram:

These components form the main parts of a cluster:

There are other components that implement the cluster, but an operator only uses the worker nodes and control plane components.

Almost every Kubernetes object includes two nested object fields that store the objects’ desired and current state — specification (represented in YAML by the spec section) and status (represented in YAML by the status section). These two fields are what an operator’s controller uses to reconcile its operands. When you want to update the desired state, you update the settings in the specification field in the custom resource. After the cluster has updated the operand, the controller will save the currently observed state of the managed resources in the status field, thereby storing the custom resource’s representation of the current state. 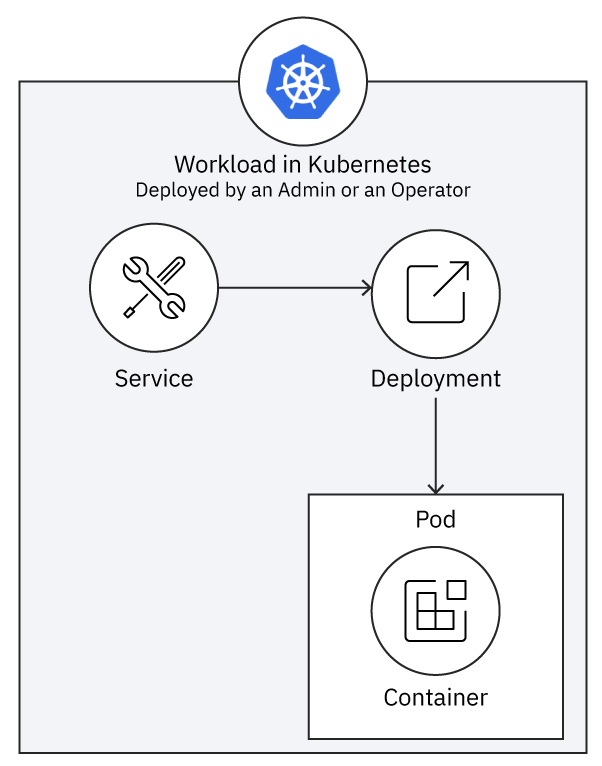 The workload consists of a Deployment that runs a set of Pod replicas, each of which runs a duplicate Container. The Deployment is exposed as a Service, which provides a single fixed endpoint for clients to invoke behavior in the set of replicas.

How operators deploy a workload 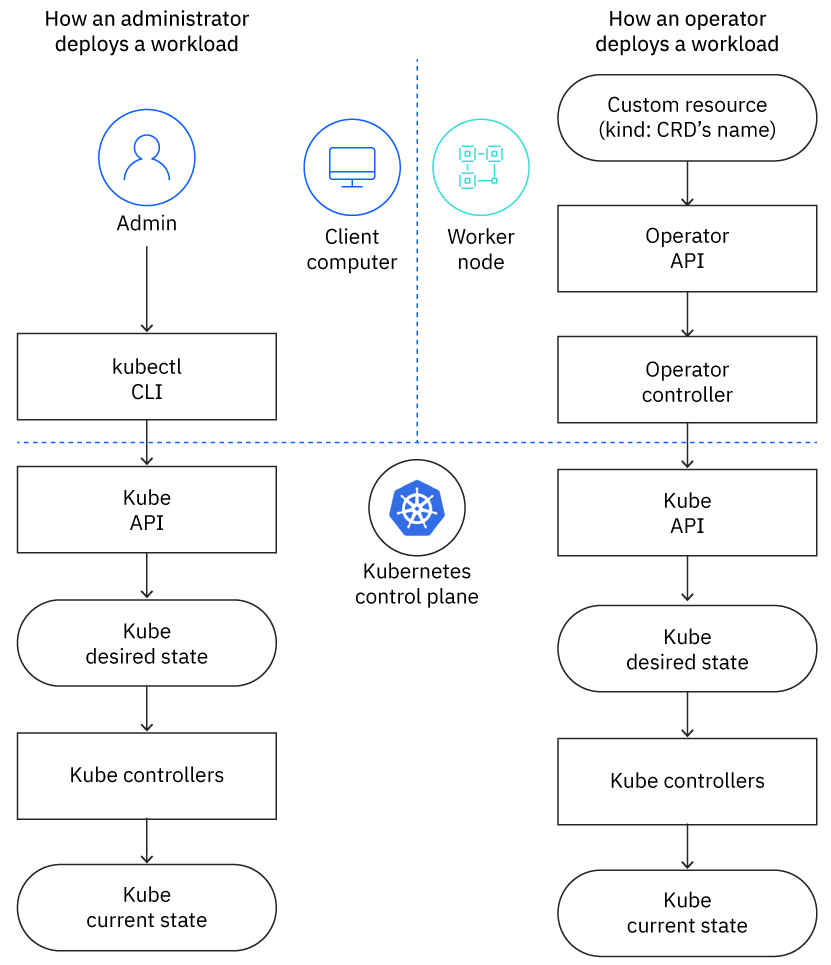 An administrator uses client tools such as the kubectl CLI and YAML files to tell the cluster what resources to create, such as those to deploy a workload. When an admin runs a command like kubectl apply -f my-manifest.yaml, what actually happens?

Voilà, a workload is deployed.

When an operator deploys a workload, it does much the same thing:

The Kubernetes API doesn’t know whether its client is an admin using client tools or an operator running a controller. Either way, it performs the commands that the client invokes by updating the desired state, which Kubernetes’ controllers use to update the current state. In this way, the operator does what the admin would do, but in an automated way that’s encapsulated in its controller’s implementation.

Let’s examine the controller manager and controllers in Kubernetes’ control plane and see how operators extend them.

Reconciliation loop is implemented in the control plane

When a controller reconciles, its task is to adjust the current state to make it match the desired state. Therefore, the control loop in the controller manager is a reconciliation loop, as this diagram shows: 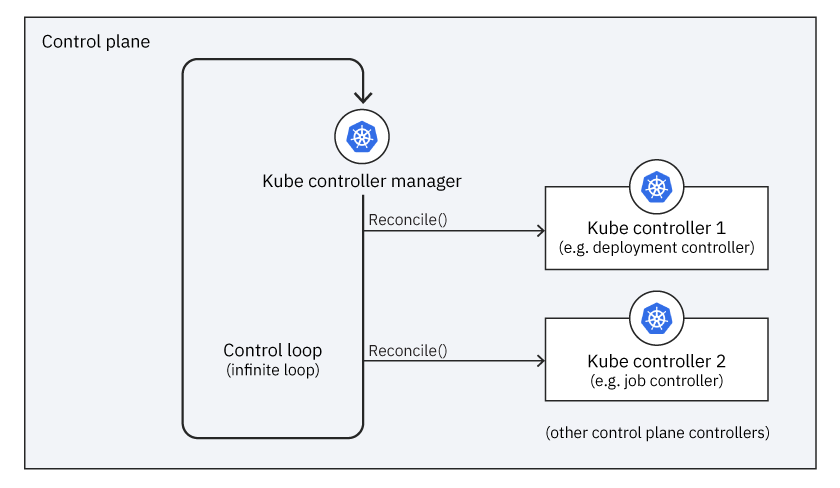 Reconciliation loop with operators extends into the worker nodes

Each operator extends the reconciliation loop by adding its custom controller to the controller manager’s list of controllers: 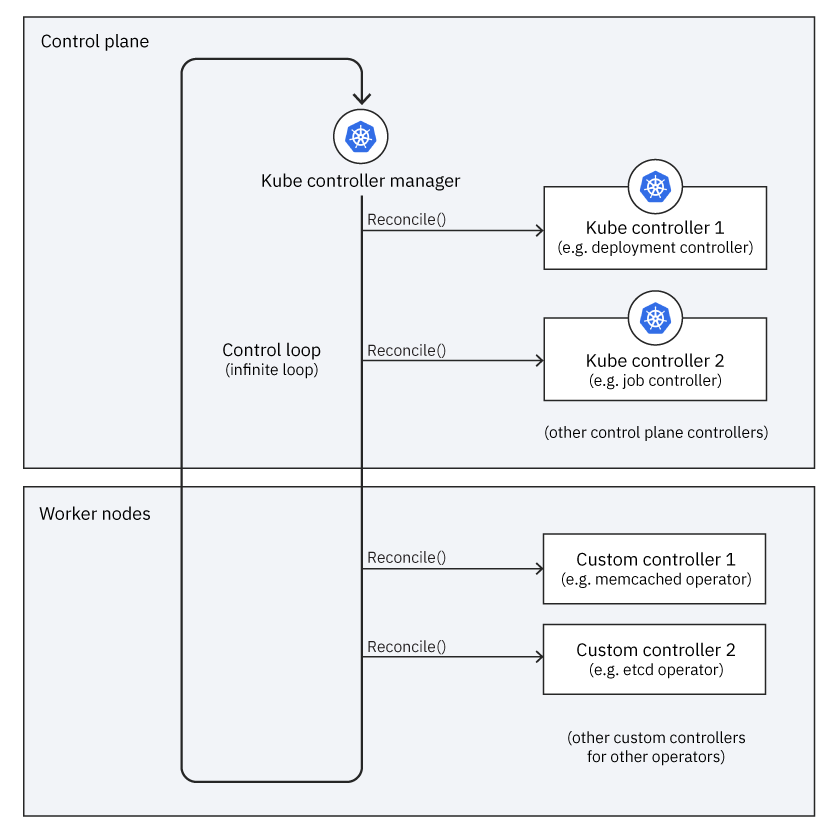 So far this article has covered the relationship between a cluster’s desired state and its current state, and how a controller reconciles between those two states for the resources it manages. 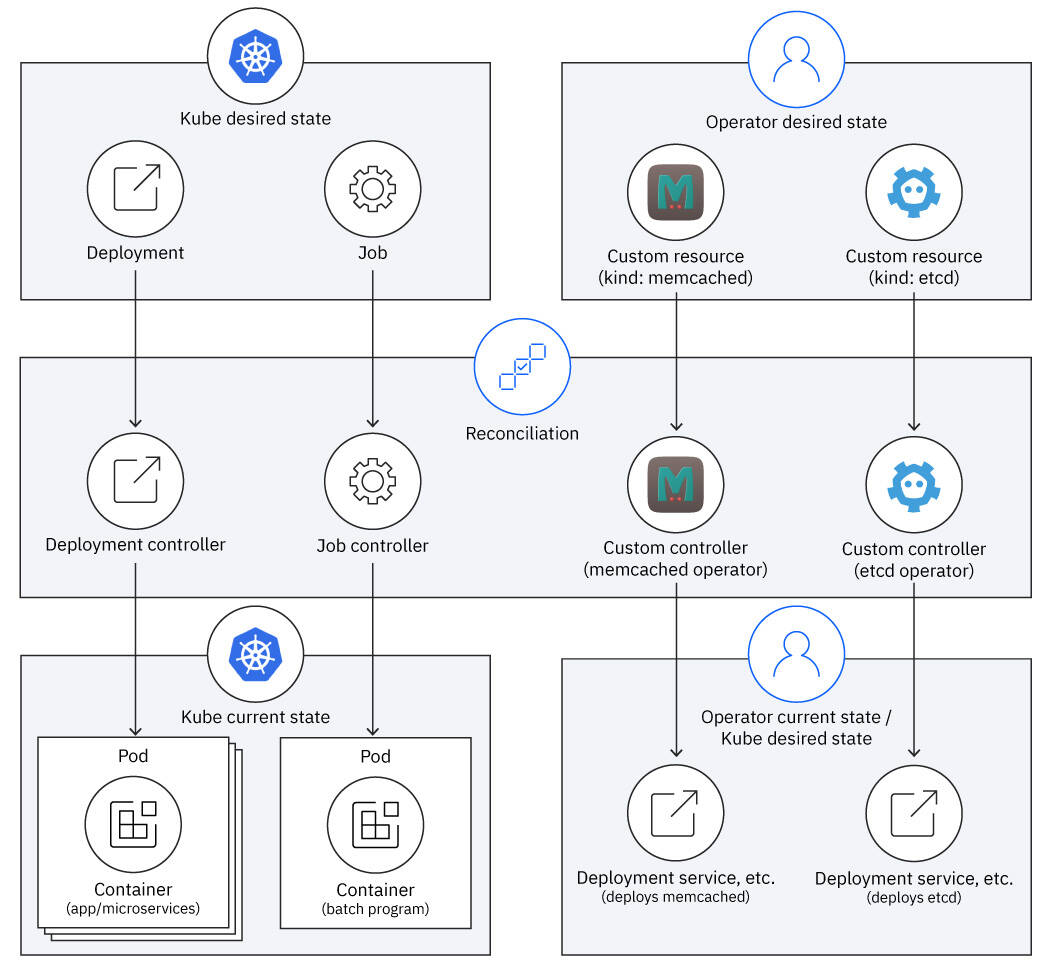 Both kinds of controllers reconcile between desired and current state, but it takes two rounds of transformation to deploy a workload for a custom resource:

This article has helped you understand that operators work the same way Kubernetes does and extend a cluster to custom manage specialized resources. Operators work like Kubernetes in several respects:

With this understanding, you’ll be better prepared to write your own operators and understand how they work as a part of Kubernetes.