Send and receive user-defined SOAP and REST messages from RPG

The program temporary fixes (PTFs) that are needed for each of the supported releases of the IBM i operating system in order to use the APIs:
7.3: SI60805, SI60808
7.2: SI60806, SI60809
7.1: SI60807, SI60810
The integrated web services client for ILE has been used for years to send SOAP messages by generating stubs that hide the details about the SOAP messaging protocol. Users would set the fields in the stub-generated structures, invoke the web service operation, and receive the response. And this has worked great.

But what if you want to bypass the stubs and just send a user-defined payload, such as an Extensible Markup Language (XML) document that is not generated by the stubs? Or maybe you want to send a JavaScript Object Notation (JSON) payload as a Representational State Transfer (REST) request, for which stub generation currently does not provide support. What to do then?

The answer to the questions is the integrated web services client. The client library has been enhanced with new application program interfaces (APIs) that enable users to send user-defined payloads. This article provides information on the APIs and some examples of API usages written in ILE RPG.

About the new transport APIs

The transport APIs may be used by client applications that want to control what is sent to a server and what is received from the server.

For RPG programming, the APIs and constants are defined in the include file:
/QIBM/ProdData/OS/WebServices/V1/client/include/Axis.rpgleinc

The typical flow of events when using the transport APIs is as follows:

If a command fails, it may be that you are trying to create the RPG program using non-ILE commands. You can find example RPG source file at: https://www.ibm.com/support/pages/node/1138654.

Let us now take a look at a sample client that uses the APIs to perform a REST request.

About the REST APIs used in the article

The REST APIs that the client example (in this article) can invoke is based on the APIs documented in the article, Building a REST service with integrated web services server for IBM i, Part 3. The REST APIs developed in the article assumes a database of student registrations and allows you to retrieve, add, delete, and update student registrations using normal REST conventions. Table 2 shows a summary of the APIs that will be used in the sample code.

The student registration database contains the records shown in Figure 1.

The client application invokes the REST APIs as follows:

So without further ado, let us go over the code as it uses the new client APIs. Figure 2 shows the beginning of the code.

Looking at Figure 2, you can find that the client code is using the ILE RPG compiler support for free-form code from column 1 to the end of line. This is indicated by specifying **FREE in column 1 of the first line (1). The other thing to notice is the /COPY statement (2) that is used to include the various client API function prototypes and related constants.

The code below is the start of the logic that initiates a delete action of a student registration record. 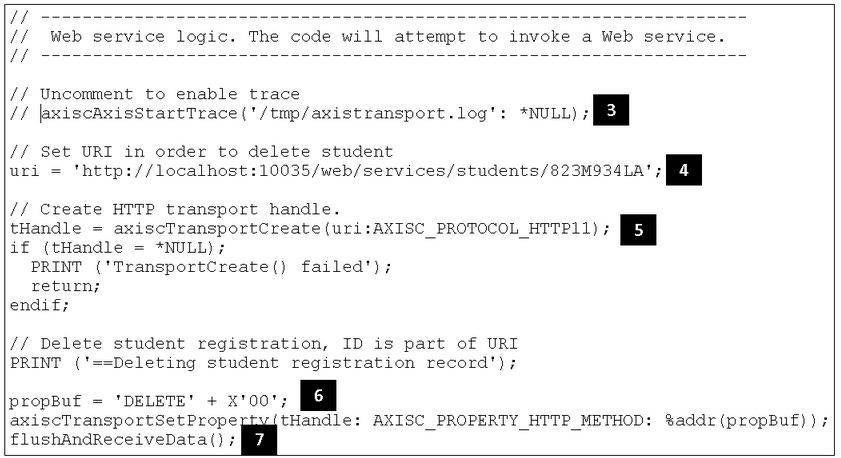 You can uncomment the line (3) that contains the function call to enable trace. If you do uncomment, the trace file will be created in file /tmp/axistransport.log. Recall from Table 2 that in order to delete a resource, the format of the URI must be /context-rootcontext-root``/students/{id}{id}. In this example, we are removing the resource (student registration) with identification of 823M934LA (4). A transport object is created (5) by calling the axiscTransportCreate() API and the HTTP method to be used on the HTTP request is set to DELETE (6) by calling the axiscTransportSetProperty() API. That is it. There is no payload to be sent with the request. The request is send to the server by the call to the subroutine flushAndReceiveData()(7). More information about this routine is provided later in the article, but basically the subroutine sends the request and handles the response to the request.

The code in Figure 4 shows the logic to create a new student registration record. 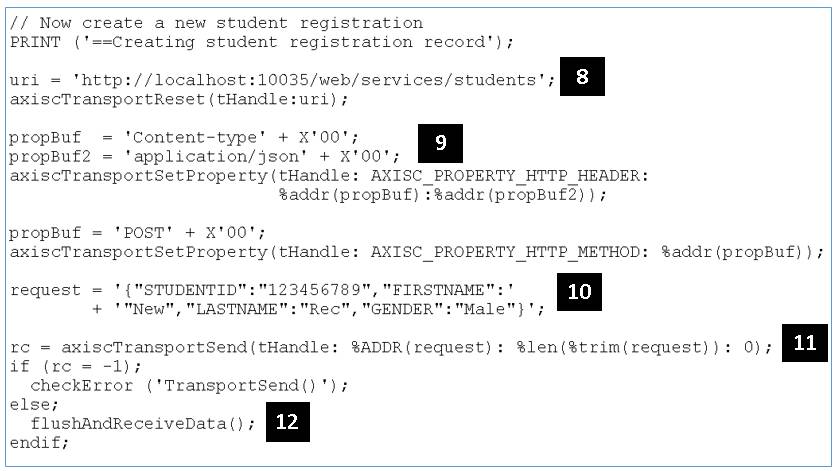 The axiscTransportReset() API (8) is invoked with the URI that is needed to create a new student registration record. Because JSON data is to be sent, the axiscTransportSetProperty() API is invoked to set the content type (9) of the HTTP request to application/json, followed by the setting of the HTTP method to POST using the same API. The payload is a JSON formatted request containing the new student registration record (10). The data is stored in the transport object by the call to the axiscTransportSend() API call (11). The request is send to the server by the call to the subroutine, flushAndReceiveData()(12).

The next step is to retrieve all the student registration records, as shown in Figure 5. 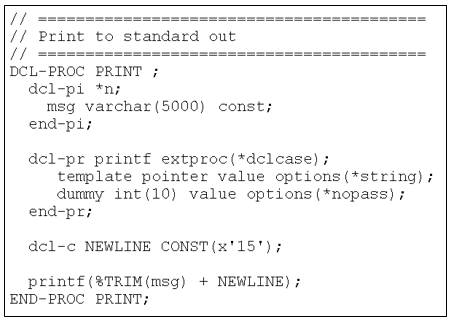 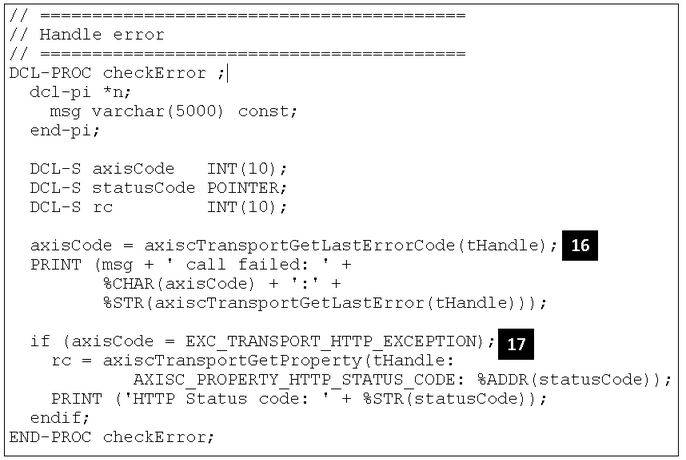 Figure 8 shows the flushAndReceiveData() subroutine. This subroutine is called to send an HTTP request and receive an HTTP response. 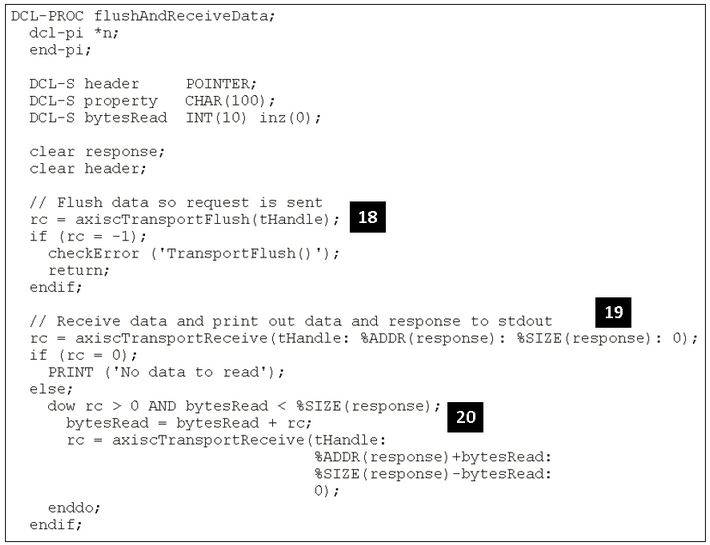 Seeing the code in action

You can compile the code (assuming that you have loaded and applied the RPG free-form PTFs discussed previously) using the following CL commands (note that <library>should be replaced with an existing IBM i library):

After the program is created, start a QShell session (using the QSH CL command) and invoke the program by issuing the following command:

If you have the web service deployed and running on your system and everything runs successfully, you should see something similar to what is shown in Figure 9.

The new APIs allow you to send user-defined payloads over the HTTP transport. This support enables you to send REST requests or even SOAP requests while controlling exactly what is sent. The APIs will handle the details of the HTTP protocol while allowing you to handle the important details, which is the payload sent and received. We’re continually trying to improve the integrated web services experience, and we’d love to hear from you.