If you’ve had the experience of preparing and serving a fine dinner, you know that the number of items used in the kitchen is often several times larger than the number of dishes delivered to the table. Preparing something as simple as a tossed salad may require the use of multiple bowls, colanders, and cutting boards before the final creation is ready to be served. Though each container may be used only for a short amount of time in preparation, putting a meal together would be difficult without them.

Like a chef at a five star restaurant, the SQL Query Engine (SQE) seeks to serve you quickly with the very best results. And like that chef, SQE often needs extra working space. It obtains this by allocating temporary storage both to optimize and to run queries. Over time, IBM DB2 continues to add functionality, and SQE has taken over an increasing share of the database workload on IBM i. IBM i 7.2 includes the biggest jump of all by making SQE the default engine for native database access, including the WRKQRY, RUNQRY, and OPNQRYF commands. As a result, the amount of temporary storage that SQE uses may increase from release to release even if your workload remains the same. With SQE doing more of the work, it consumes more temporary space to operate effectively.

Most of the time, you won’t need to think about or be aware of the state of temporary storage on your system. IBM i storage management and its finely tuned algorithms take care of keeping your workloads running smoothly. Occasionally, though, you may see a poorly written query or a bad plan that leads to excessive temporary storage usage. SQE will prevent a query from exhausting the system’s storage, but the excessive storage usage of one or a handful of queries can still have an adverse impact on other IBM i workloads. Sometimes, the increased storage usage points to a bad data model or a poorly written query. You (or your database engineer) must be able to detect a situation like this, as well as clean it up and prevent it from reoccurring. Doing this requires you to understand why the temporary storage is needed and what normal looks like for a healthy database workload on your system. There are a number of IBM i tools that can assist you, and in a follow-up article, we’ll talk about the tools and techniques you can use to analyze and manage temporary SQE storage.

For now, we’ll lay the groundwork by exploring the five kinds of temporary storage that SQE uses. Beginning with IBM i 7.2, you can see how much of each kind of storage SQE is currently using. Simply query the QSYS2.SYSTMPSTG view (refer to IBM Knowledge Center for details). Within this view, system-wide temporary storage is identified by the presence of a value in the GLOBAL_BUCKET_NAME column. The most important bucket names for SQE begin with *DATABASE… 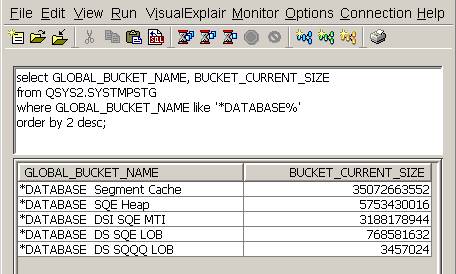 All five buckets (shown in Figure 1) can be relatively large on a system with high SQL activity, but they play an important role in enabling the query engine to deliver results quickly. All buckets will also tend to reach a (relatively) steady state for a given workload. However, it might take time to reach this steady state. And remember, these allocations are being made from temporary storage, so they disappear at initial program load (IPL). Consequently, it might take hours or days after an IPL for the storage usage to level off. It is important to realize that this is normal. Becoming familiar with what normal looks like for your system and database workload is a key piece of information for detecting and diagnosing a potential problem.

Of the five SQE buckets, the most significant are “DATABASE SQE Heap”, “DATABASE Segment Cache”, and “DATABASE DSI SQE MTI”. These are usually the largest buckets, and we will devote the most attention to them. The other two buckets, “DATABASE DS SQE LOB” and “*DATABASE DS SQQQ LOB”, are discussed briefly at the end of this article.

The first bucket we will look at is “*DATABASE SQE Heap”. The heap is storage that the query engine’s optimizer uses as a temporary scratch area while it is processing and optimizing the query. Internal data structures necessary for optimization are continually allocated and de-allocated from the heap. Some heap storage is only used for a short time and is returned to the system when the optimization is completed. But other heap allocations might persist much longer—for hours or days. This is because the heap is also the home of some of the data structures used to implement the SQE plan cache.

The plan cache is where plans are saved, allowing the same query to run multiple times without going through the optimization process on each execution. It is described in more detail in IBM Knowledge Center. As a repository for optimized access plans, the plan cache must retain enough information to run an access plan the next time a cached query is run. This information is allocated from heap storage. More plans in the plan cache means more system storage allocated in the SQE heap. The amount of storage allocated for the plan cache is limited by the plan cache size. This size is usually managed by the query engine. This size can also be explicitly set by a user with appropriate authority, but doing so is rarely necessary.

When it comes time to run SQL queries, the query engine might also need some amount of storage (allocated in “segments”) to temporarily hold your data while it is processed. This data is contained in query runtime objects—structures like lists, buffers, and hash tables. These runtime objects implement functions and features such as sorting, aggregation, buffers for simultaneous multiprocessing (SMP), and others. Storage allocated for these objects are marked as “*DATABASE Segment Cache.” At the optimizer’s discretion, these temporary data objects may sometimes be stored in the plan cache once a query has completed. This allows a subsequent run of the query to skip some of the work of re-populating these temporary objects (if the underlying data source hasn’t changed.) As the plan cache grows larger—within the constraints of the system’s configuration and the optimizer’s internal management—there will, generally, also be more cached temporary objects.

When the runtime objects are no longer needed, the associated segments might not be immediately returned to the system. Instead a limited amount of this storage is placed into the Segment Cache proper, where it becomes available for other queries to use. This is done to avoid some of the expense of allocating and de-allocating storage from the system. This cached storage is also included in the value reported for “*DATABASE Segment Cache.”

Similar to the query runtime objects described above, maintained temporary indexes (MTIs) are available to assist the query engine both in optimizing and in running queries. Structurally and functionally, these indexes are identical to permanent radix indexes created by a user, but they are managed entirely by the query engine. Similar to user indexes, each MTI is associated with a specific table, and all of the data resides in temporary storage. The storage used for MTIs is tagged as “*DATABASE DSI SQE MTI” in the SYSTMPSTG view. The lifecycle of an MTI and its corresponding memory allocations might vary depending on its purpose, usage, and other factors. For more information, see IBM Knowledge Center.

As you may have surmised from the names, the last two buckets are specific to the usage of database large objects (LOBs): character large objects (CLOBs) and binary large objects (BLOBs). The “DATABASE DS SQQQ LOB” bucket temporarily holds large object data while a query is being processed. After the query is closed, the storage is freed. The “DATABASE DS SQE LOB” bucket is more closely related to the Segment Cache bucket, because it provides storage for large objects referenced by query runtime objects. Consequently, in situations in which query runtime objects are retained along with cached plans (see above), any associated LOB storage will also remain allocated. Of course, a system with little or no LOB data will likely see small allocations for these two buckets.

Putting all these pieces together, we can see that the bucket labeled “*DATABASE SQE Heap” includes both storage allocated to the plan cache and storage currently in use by the optimizer. The bucket labeled “*DATABASE Segment Cache” includes storage for temporary data objects associated with the plan cache, data currently used by the running queries, and storage cached for quick reuse. “*DATABASE DSI SQE MTI” is for maintained temporary indexes that the optimizer chose to build. The LOB buckets facilitate the efficient usage of large objects. Each of these buckets is essential to the work that SQE performs to answer your queries quickly.

Now that we’ve finished our brief tour of the kitchen, I hope you have a clearer understanding of what the chef is doing back there and why he’s making such a racket with all those pans. There really is a method to his madness. At the same time, there might be things that you can do to help him out and to keep the orders running smoothly. That will be the topic of the second article in this series. We’ll look at how to use the tools you already have with IBM i to debug temporary storage problems and to ensure a smoothly running database workload. See you next time!

If you need assistance with the knowledge and understanding of query optimization, or further details about IBM DB2 for i, you can contact my colleague Kent Milligan with IBM Lab Services. You can reach him at kmill@us.ibm.com.