It should take you less than 10 minutes to read this article.

A microservice, from its core principles and in its true context, is a distributed system. A transaction is distributed to multiple services that are called sequentially or parallelly to complete the entire transaction. With a microservices architecture, the most common pattern is database per microservice, so transactions also need to span across different databases.

Figure 1 shows an example of a simple airline flight booking scenario implemented using a microservices architecture. There would be one microservice to block a seat, another to accept payments, and finally, another microservice to allocate the blocked seat, each implementing a local transaction to realize their functionalities. To successfully complete the flight booking process for a traveler, all three steps must be completed. If any of the steps fails, all of the completed preceding steps must roll back. Since the overall transaction boundary crosses multiple services and databases, it is considered to be a distributed transaction.

With the advent of microservices architecture, there are two key problems with respect to distributed transaction management:

Two-phase commit is a well known pattern in database systems. This pattern can also be used for microservices to implement distributed transactions. In a two-phase commit, there is a controlling node that houses most of the logic and participating nodes (microservices) on which the actions are performed. It works in two phases:

Even though 2PC can help provide transaction management in a distributed system, it also becomes the single point of failure as the onus of a transaction falls onto the coordinator. With the number of phases, the overall performance is also impacted. Because of the chattiness of the coordinator, the whole system is bound by the slowest resources since any ready node has to wait for confirmation from a slower node. Also, typical implementations of such a coordinator are synchronous in nature, which can lead to a reduced throughput in the future. 2PC still has the following shortcomings:

A Saga, as described by Hector Garcia-Molina and Kenneth Salem their 1987 Association for Computing Machinery article, is a sequence of operations performing a specific unit of work and are generally interleaved with each other. Every operation that is part of the Saga can be rolled back by a compensating action. The Saga guarantees that either all operations complete successfully or the corresponding compensation actions are run for all executed operations to roll back any work previously done.

A compensating action must be idempotent and must have the capability to be retried until it is executed successfully, essentially making it an action that just cannot fail and no manual intervention is required to solve its failure. The Saga Execution Coordinator (SEC) provides that guarantee and capability to the overall flow, making it a transaction that is either successful or aborted successfully with necessary rollbacks.

The following diagram shows how a Saga can be visualized for the aforementioned flight booking scenario.

How the Saga pattern helps in a distributed transaction scenario

Microservices introduced another set of problems for managing transactions, as each of the domain-driven services is deployed individually and running in isolation. With a microservices architecture, a single business process brings multiple microservices together to provide an overall solution. It is very difficult to implement ACID (Atomicity, Consistency, Isolation, Durability) transactions using a microservices architecture and it’s impossible in some cases. For example, in the aforementioned flight booking example, a microservice with the block seat functionality can’t acquire a lock on the payment database, since it is an external service in most cases. But some form of transaction management is still required, so these transactions are referred to as BASE transactions: Basic Availability, Soft state, Eventual consistency. Compensating actions must be taken to revert anything that occurred as part of the transaction.

This is where the Saga pattern fits perfectly, as it helps to:

The Saga Execution Coordinator (SEC) is the core component for implementing a successful Saga flow. It maintains a Saga log that contains the sequence of events of a particular flow. If a failure occurs within any of the components, the SEC queries the logs and helps identify which components are impacted and in which sequence the compensating transactions must be executed. Essentially, the SEC helps maintain an eventually consistent state of the overall process.

If the SEC component itself fails, it can read the SEC logs when coming back up to identify which of the components are successfully rolled back, identify which ones were pending, and start calling them in reverse chronological order. 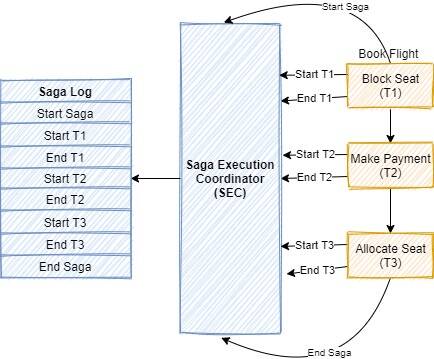 There are two logical ways to implement the Saga pattern: choreography and orchestration. 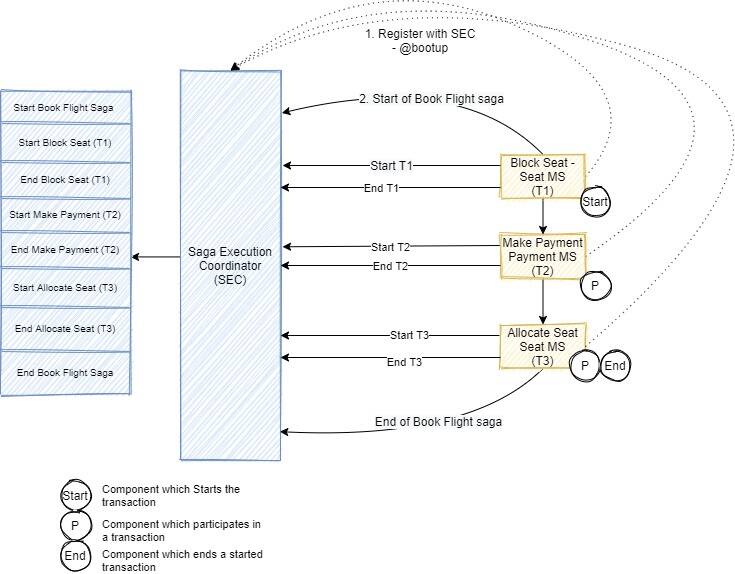 Whenever a service comes up, it registers itself with the SEC which makes it available to be part of a transaction that may span various microservices. The SEC maintains the sequence of events in its log, which helps it make a decision about the compensating services to call in case of failure and the sequence. The following diagram shows how the logs are maintained in a failure scenario. 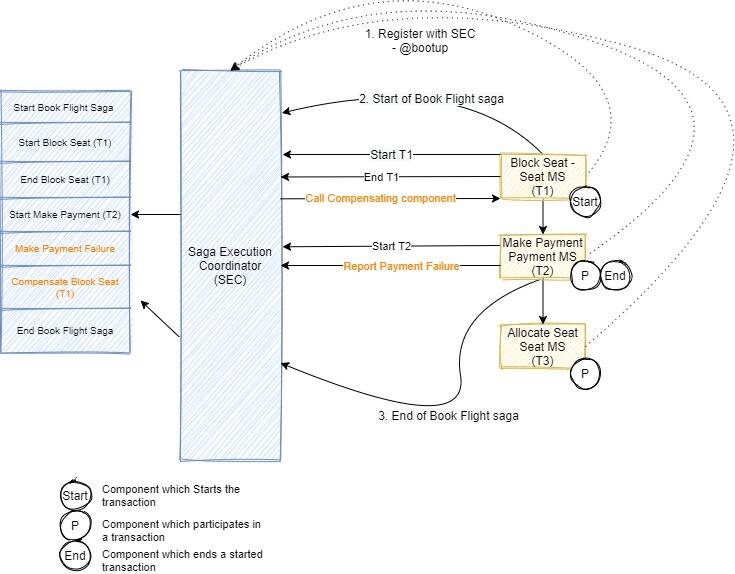 As the name of the Saga orchestration pattern suggests, there is a single orchestrator component that is responsible for managing the overall process flow. If the process encounters an error while calling any individual microservice, then it is responsible for calling the compensating service too. The orchestrator helps model the Saga flow, but also relies on the underlying framework to call the services in a sequence and make compensating calls if any of the services fail.

In the following diagram, the book flight process microservice encapsulates calls to various microservices in a particular sequence. If any one of those calls fail, then rollback happens by calling the compensating action of those microservices. 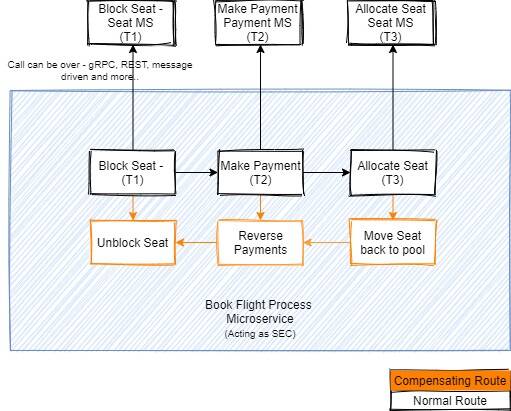 The Saga orchestration pattern is ideal for scenarios where you already built your microservices and now want to create a process flow using these microservices. There must be a compensating service available and adding another piece of code is not necessary. This is unlike the Saga choreography pattern, where you must align the code with a framework that you chose to implement the Saga.

The following frameworks are available to implement the Saga orchestration pattern:

In a microservices world where each microservice has its own data store, it is complex and difficult to keep the consistency of data. Saga is one of the best ways to implement BASE transactions and ensure the eventual consistency of the data in a distributed architecture. Optimal implementation of Saga requires a mindset change for both business and development teams.