Use Elyra to extend the new JupyterLab user interface

Jupyter Notebooks are now the open standard for data science and artificial intelligence (AI) model development. In keeping with our commitment to open source and the Jupyter community, in particular, IBM is proud to announce Elyra, a set of open source AI-centric extensions to Jupyter Notebooks, and, more specifically, the new JupyterLab user interface.

The initial release of Elyra includes:

“I’m excited to see IBM engaging with the Jupyter and scientific open source communities with their ongoing contributions in this area. As much as AI tools rely on vast amounts of data and computational resources, the human in the loop remains the critical element for both asking the right questions and making decisions responsibly. That’s where Jupyter plays a role, and I’m delighted to see new tools like Elyra that will help AI workflows within the Jupyter ecosystem.” — Fernando Pérez, Project Jupyter co-Founder and co-Director

Building an AI pipeline for a model is hard. Breaking down and modularizing a pipeline is harder. A typical machine and deep learning pipeline begins as a series of preprocessing steps followed by experimentation, optimization, and, finally, deployment. Each of these steps represents its own unique challenge in implementation, execution, scheduling, and operation when bringing deep learning models from development to production.

Elyra provides a visual editor for building Notebook-based AI pipelines, simplifying the conversion of multiple notebooks into batch jobs or workflows. By leveraging cloud-based resources to run their experiments faster, the data scientists, machine learning engineers, and AI developers are then more productive, allowing them to spend their time using their technical skills.

Elyra also extends the Notebook UI to simplify the submission of a single Notebook as a batch job, as the following image shows.

Elyra takes advantage of the work that we’ve done with Jupyter Enterprise Gateway to enable Jupyter Notebooks to share resources across distributed clusters such as Apache Spark, Kubernetes, and OpenShift.

It simplifies the task of running the notebooks interactively on cloud machines, so you can use the power of cloud-based resources that enable the use of specialized hardware such as GPUs and TPUs. 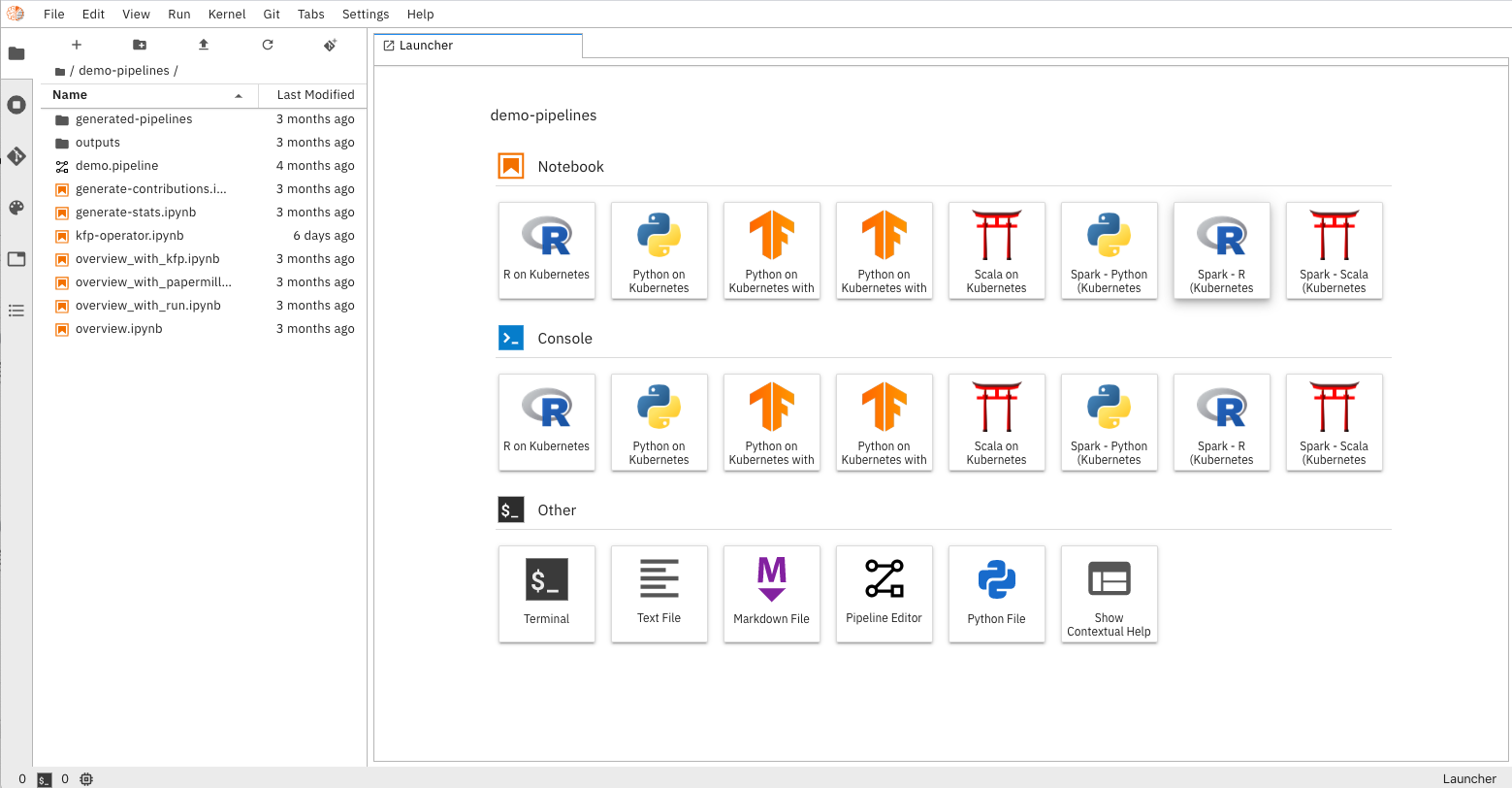 Versioning based on Git integration

The integrated support for Git repositories makes tracking changes easier, allowing users to roll back to working versions of the code, backups, and, most importantly, sharing among team members. This collaborative working environment fosters productivity. 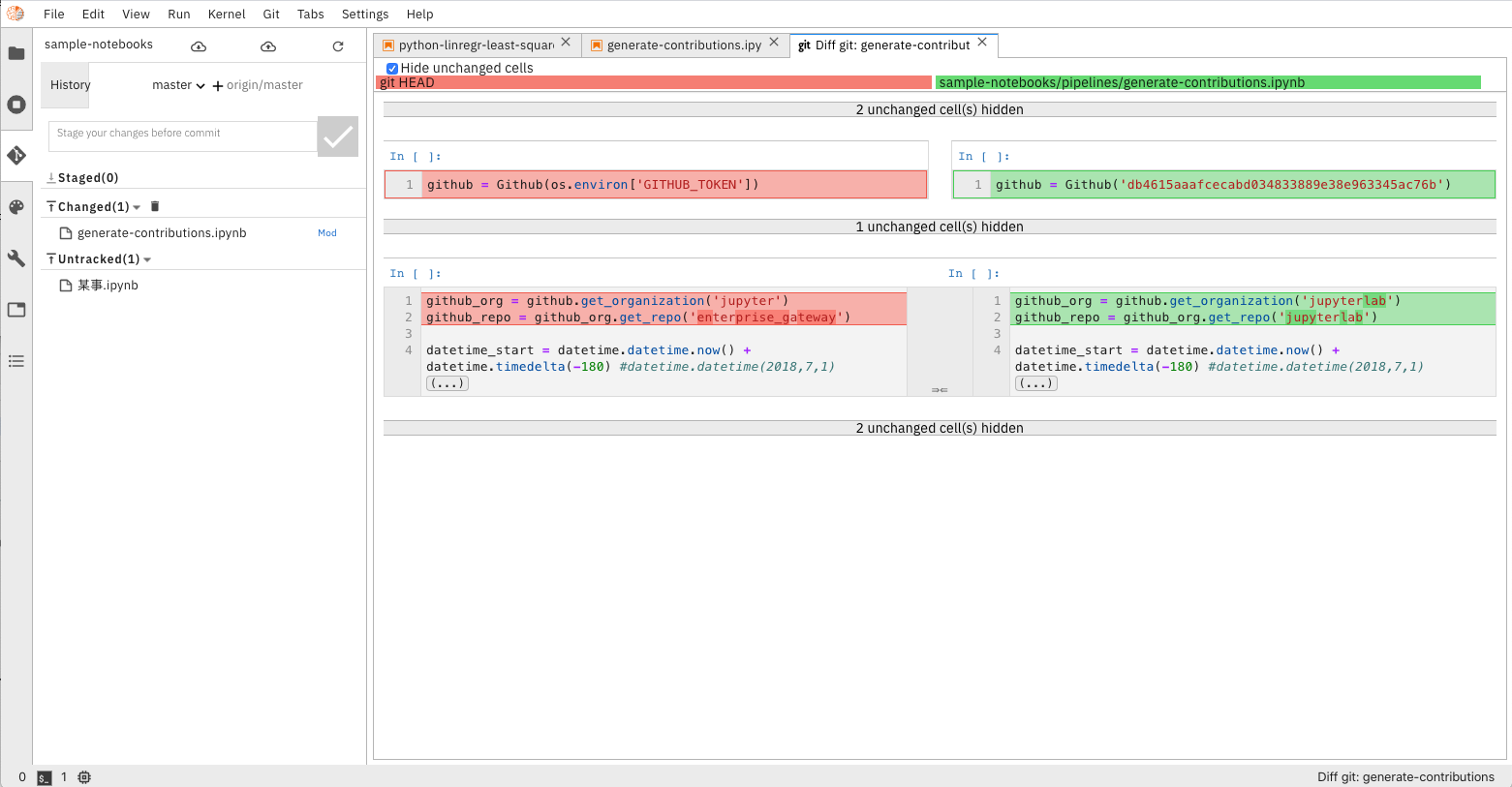 Elyra introduces a ‘shared configuration service’ that simplifies workspace configuration management, enabling things like information around accessing external runtimes to be configured once and shared across multiple components.

IBM recently announced new releases of IBM Cloud Pak for Data and Watson Studio which added JupyterLab as a richer way to work with Notebooks, in addition to classic Jupyter Notebooks. The current version of Watson Studio already provides versioning based on Git integration and is continuing to work with the open source community to incorporate other Elyra extensions. 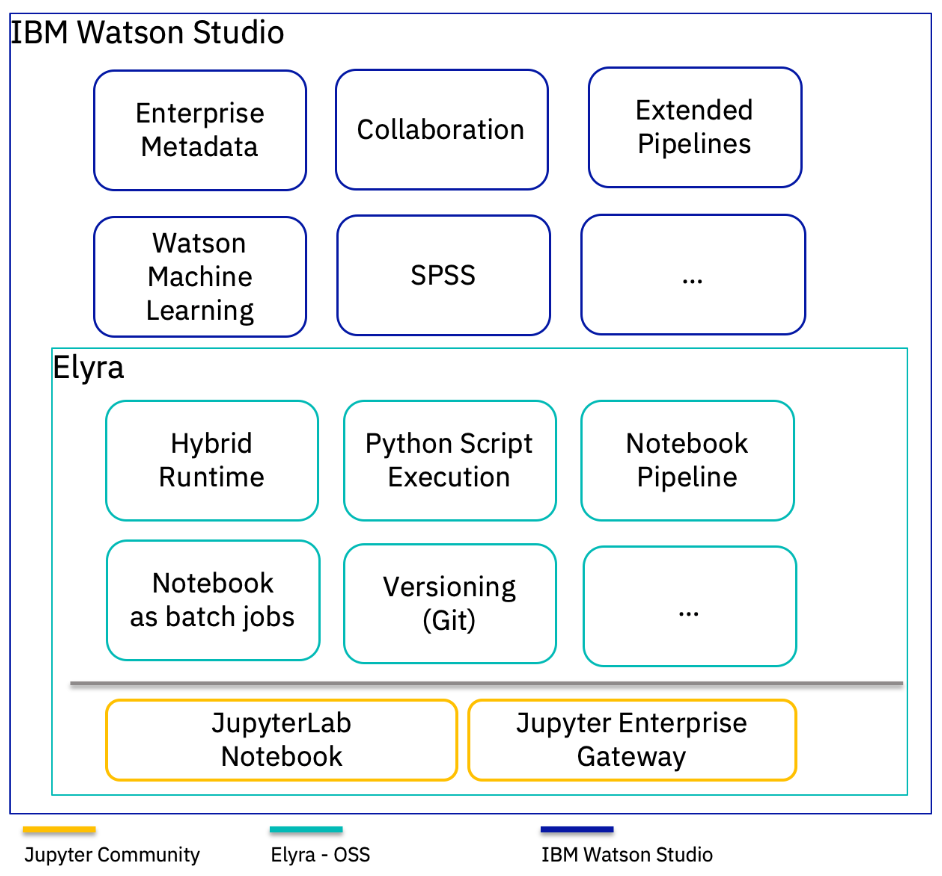 Previously, the work on Jupyter Enterprise Gateway addressed the challenges around scaling enterprise workloads, and now Elyra addresses the challenges of making workload development easier. In addition, IBM is contributing to TensorFlow, PyTorch, Spark, KubeFlow, KubeFlow Pipelines, ONXX, and Egeria to address an even broader set of enterprise data and AI development challenges.

We would love for you to get involved with the project. Read our contributing guidelines, create new issues if you have questions, suggestions for new features or in case of any problems. We also welcome contributions via GitHub pull requests.

Get started with Distributed AI APIs