Inferencing for data on IBM AIX

As artificial intelligence (AI) is becoming mature, every industry wants to adopt it. Enterprises want to use it to unlock the hidden insight from data and use that to make strategic choices for companies. Many enterprises are continuously evaluating different use cases and experimenting with data using different AI frameworks. Having an infrastructure that can support different machine learning and deep learning (MLDL) frameworks is one of the challenges for enterprises in experimenting with AI. In many cases, it is helpful to be closer to data where you want to perform AI. This helps in security and faster movement of data from rest to work. Now you can easily run and experiment with ML/DL models on the IBM® Power Systems™ servers those run IBM AIX® (for example, IBM PowerVM® virtualized IBM Power Systems servers such as IBM Power® System E980, Power E950, and Power S924).

This tutorial describes how you can install the IBM Watson® Machine Learning Community Edition (WML CE) on Power Systems servers and some examples to experiment with it. This tutorial demonstrates how to perform non-accelerated inferencing against data on an IBM AIX® logical partition (LPAR) by using AI capabilities on Linux LPAR [also called a virtual machine (VM)] inside the same IBM Power Systems server. This helps in using a secure, high-speed, and low overhead data movement between AI and enterprise processing environments.

WML CE version 1.6.1 is built based on the former release of IBM PowerAI. It is a software toolkit for machine learning and deep learning frameworks with their dependencies. It is built for easy and rapid deployment of AI frameworks.

WML CE can be installed either by using the Conda repository or the Docker images. There are two versions of WML CE (one for GPU and one for CPU-only systems). In this tutorial, we use the CPU-only images for IBM Power Systems servers.

Refer to the following operating system requirement for installation of WML CE.

To install WML CE on a PowerVM virtualized IBM Power Systems server, install one of the above mentioned operating systems on an LPAR. After setting up your Power Linux partition, use one of the methods explained in the following sections to install WML CE.

After this, WML CE is installed and ready to be used in your environment.

Docker images are Ubuntu 18.04 based but can be installed on RHEL systems. Perform the following steps to install WML CE using a Docker image.

After completing these steps, you will be inside the Docker that has most of the packages and AI frameworks installed and it is now ready for use. The Docker image is a Conda environment. If any package is missing in the image, you can install that using the conda install <package name> command inside Docker. For example, if the Python pandas package is not available in Docker, then you can just install pandas using the conda install pandas command inside Docker.

Note: If there is no internet connection to the system where you want to install the Docker image then there are couple of options.

The focus of this tutorial is to describe a scenario of accessing an AI model on Linux LPAR from the AIX LPAR using Representational State Transfer (REST) APIs. This helps AIX users to run predictions on the data present on the AIX LPAR. Model deployment is done on the Linux LPAR and inferencing using REST APIs is done from the AIX LPAR. The Linux and AIX LPARs are inside the same Power Systems server.

After installing WML CE on the Linux LPAR on Power Systems server, it is ready for building and deploying ML/DL models. After the training, model is generated and saved on the system. The model can also be built on an accelerated compute server (such as Power AC922 system) and it can be brought to the Linux LPAR.

The model which is ready for deployment on the Linux LPAR can be served using frameworks such as TensorFlow Serving, Flask, and so on. The deployed model exports REST APIs which can be called from the AIX LPAR to access the model and run predictions.

The data can be retrieved from the database on the AIX LPAR and can be sent to the Linux LPAR for inferencing using the REST API. The existing applications running on AIX which are written in C/C++ or Java can easily incorporate or enable the REST APIs method to run inferencing on the data.

The model building, deployment, and inferencing are depicted in the Figure 1. 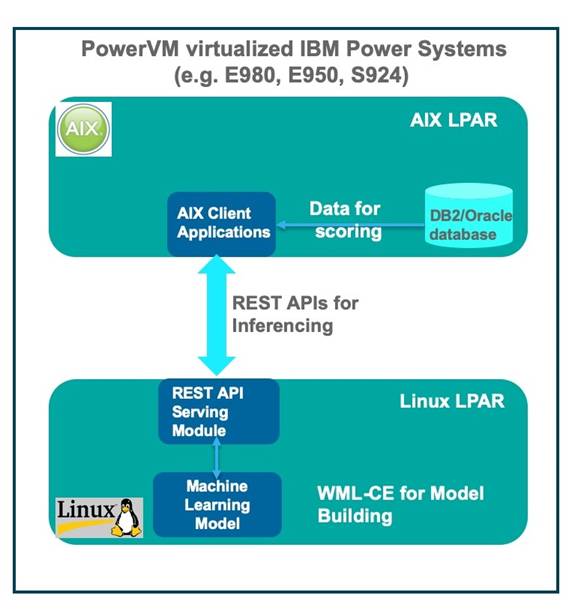 Model training, deployment, and inferencing explained above are demonstrated using the following examples. You can download the source code for these examples from https://github.com/IBM/aix-ai-sample-wmlce

This example deals with banking-related use case and to write a model to predict the merchants who can default with the bank. The model is deployed on a Linux LPAR that has WML CE installed and the model is served using REST APIs. The model can be accessed from an AIX LPAR for inferencing using REST APIs. This is explained in detail in the following sections.

This use case is on retaining merchants who are using company network for credit card processing. A client approved many low-value merchant accounts without much scrutiny. Many of those merchant accounts resulted in the defaulters list. Those merchant accounts were focusing on the categories such as cars, furniture, electronics, and so on. The client thinks that they should have put more emphasis on their applicant screening process.

This section explains how the problem mentioned in use case is solved using a machine learning algorithm by writing a model, deploying, and exporting using REST APIs. We choose a TensorFlow-based model to solve this use case by treating this as a classification problem because the merchants need to be categorized in to two discreet categories, that is, default or non-default.

The data used for training can be in RDBMS or in a CSV file. The example provided will have the files listed in Table 1.

The model can be generated on any PowerLinux LE system with WML CE using the following two steps:

This command starts a Flask-based server and exposes REST API for the AIX LPAR to access the model.

REST API for inferencing can be called from the AIX LPAR or any other LPAR on which data is stored. In this example, we are assuming that the data is either in the IBM DB2® database or in a CSV file for which we need to run predictions. The data is retrieved on the AIX LPAR and sent to the Flask server running on the Linux LPAR to obtain predictions.

To run this example, the AIX operating system version should be either 7.1 or 7.2 and Python version should be 3.7. The inferencing API from AIX can also be called using the curl command as shown later. You can install the curl and python3 packages on AIX from AIX Toolbox for Linux Applications.

You can run the inferencing from the AIX LPAR using any of the following three methods:

In this method, we need the IBM DB2 module to be installed to connect to the DB2 database using the Python script.

In the output of this client command, you can see a prediction value of either 0 or 1.

This is an example of fraud detection in e-commerce industry by identifying counterfeit retail transactions. Fraud in e-commerce comes in several distinct flavors. Early detection of anomalies in an automated real-time fashion is an important part of e-commerce system.

This use case shows an example where the customer behavior and purchase history details areused to identify the risk score for each of the retail transaction. This risk score is used to decide if a transaction is safe to be committed.

The model is deployed on a Linux LPAR that has WML CE installed, and the model is served using REST APIs. It can be accessed for inferencing either from AIX before committing a transaction or from a point of sale system that is updating DB2 for the retail transactions as shown in Figure 2. 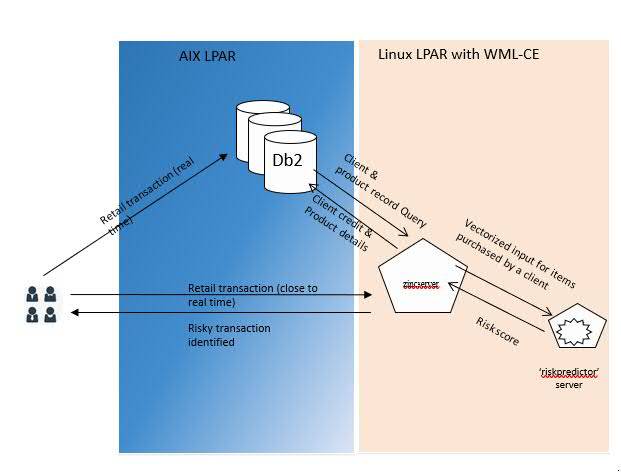 The data resides on the DB2 database on the AIX system. Perform the following steps to create a database and insert sample retail transactions into it.

After running the above script, data will be inserted in to a new database called retails in the tables: customers, manufacturers, merchants, products, orders, lineitem, merchant_promotion and manufacturer_promotion under schema, testcredit.

This section explains how the problem mentioned in use case (in the previous section) is solved using a machine learning algorithm by writing a model, deploying, and exporting using REST APIs. The Scikit-learn model is used for this use case by treating this as a logistic regression problem because a transaction needs to be given a risk score ranging from 0 to 1.

The data used for training should be in a CSV file. The example provided will have the important files mentioned in Table 2.

The model can be generated on any PowerLinux LE system with WML CE using the following steps:

Model scoring/Inferencing (from AIX or a Transaction server)

REST API for inferencing can be called either from the AIX LPAR where data is stored or any other LPAR where the transaction is being initiated. Scoring is initiated by providing the transaction ID to the zincserver running on the Linux LPAR, which then retrieves the details of the transaction from the DB2 database on the AIX system and presents to the riskpredictor server to get the risk score.

Invoke the curl command from the AIX/Linux server to access zincserver on the Linux LPAR through REST API. Refer to the following example curl command to access the model for a sample prediction:

The output of the above command is the risk score for the transaction.

IBM AIX users can take advantage of machine learning models for their data using the method explained in this tutorial. When a model is trained and deployed on a WML CE installed Linux LPAR, the data on AIX can be sent to the Linux LPAR using REST API for inferencing. Existing AIX applications can incorporate REST APIs easily to run online scoring for their data. This can either be a real time scoring or a batch scoring depending on the application requirements. This tutorial helps AIX users to run predictions on their data with a couple of examples using TensorFlow and Scikit-learn based models.