The flexible service processor (FSP) firmware provides diagnostics, initialization, configuration, run-time error detection, and correction. It is required to periodically update the firmware on the Power Systems server. Keeping the firmware up-to-date can help in attaining the maximum reliability and functionality from your systems.

This tutorial provides the following information:

In the following sections, let’s go through in detail covering all the topics highlighted above.

We will use the View system information option to get the current system firmware information.

Select the system under test, click Updates, and then click View system information to check the currently installed, activated, and accepted levels. 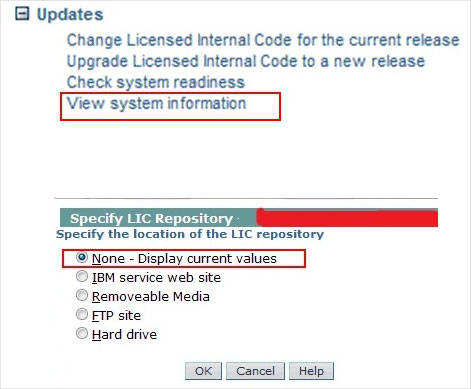 The following figure shows the currently installed firmware levels on the system.

Fields in figure 1.2 are described below:

This displays the numerical identifier of the engineering change (EC) that shows the system and GA level. It has the format of PPNNSSS, where:

This displays the LIC types associated with the selected target.

This displays the LIC level that will be activated and loaded into memory at the next system restart.

This displays the LIC level that is activated and loaded into memory (for example, from a level 5 to level 7).

This displays the LIC level that was committed. This refers to the updates selected on the system.

This displays the latest or highest LIC level that contains unactivated deferred updates. This refers to the updates selected on the system.

A deferred update requires a system restart to activate.

This displays the LIC level on which the hypervisor and partition firmware were last restarted. When concurrent LIC updates are performed, the activated level will change, but the platform IPL level will remain unchanged.

This displays the current owner of LIC update control. It can be either HMC or operating system.

Having known the current firmware levels on the system as described in Section 1 and in order to move up to the necessary latest update that is available, we have various firmware update and upgrade methods as mentioned below. Select the one that is appropriate to your requirement.

You can obtain the Power Systems firmware fix packs or firmware releases from the IBM Fix Central website.

Select the following categories for Power Systems firmware update and choose the appropriate machine type and model of your system to be updated.

As per the example shown in Figure 3.0, the machine type and model used is: 8203-E4A. Select the appropriate machine type of your choice and continue.

The example in Figure 3.1 shows all available options to select the fix. Users can choose the required Power option for system firmware. Similarly, users can explore other options too. 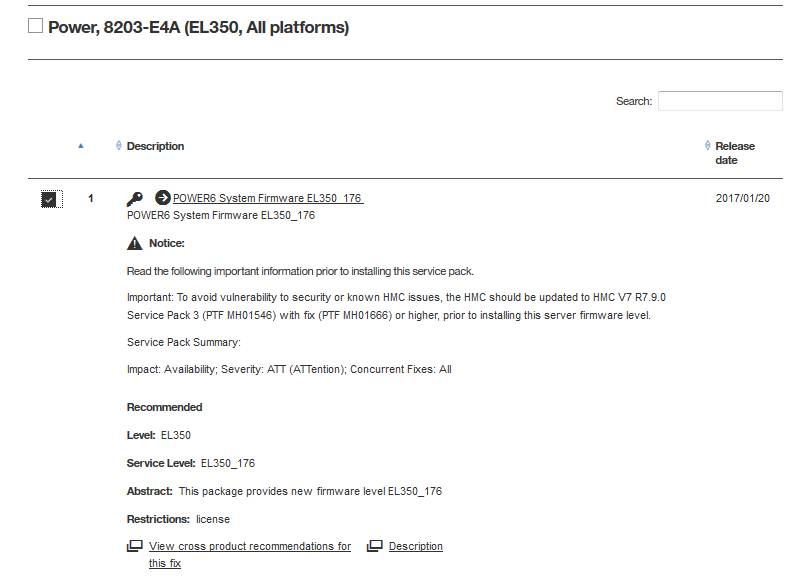 After selecting the respected firmware level, scroll to the bottom of the page and click Continue, as shown in Figure 3.3. 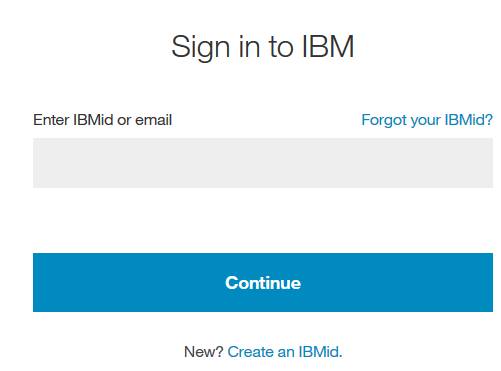 On the page as shown in Figure 3.6, specify the machine serial number and click Continue. 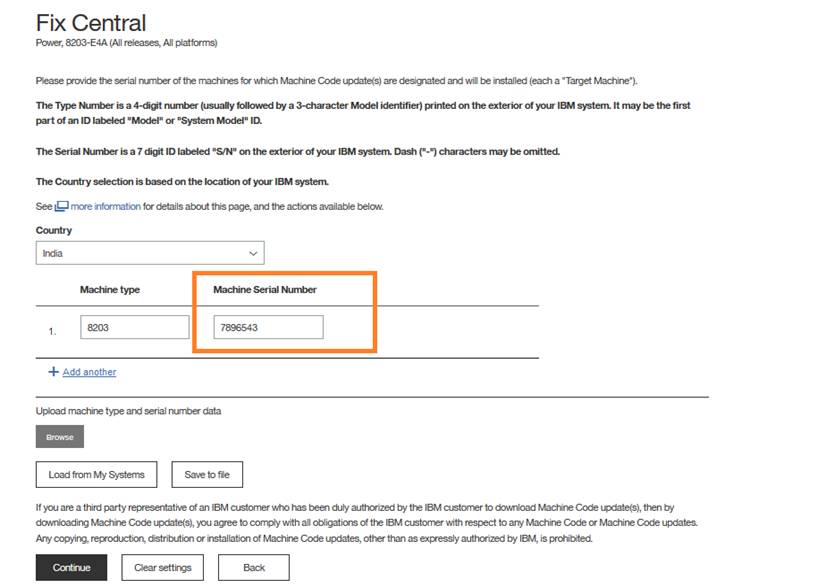 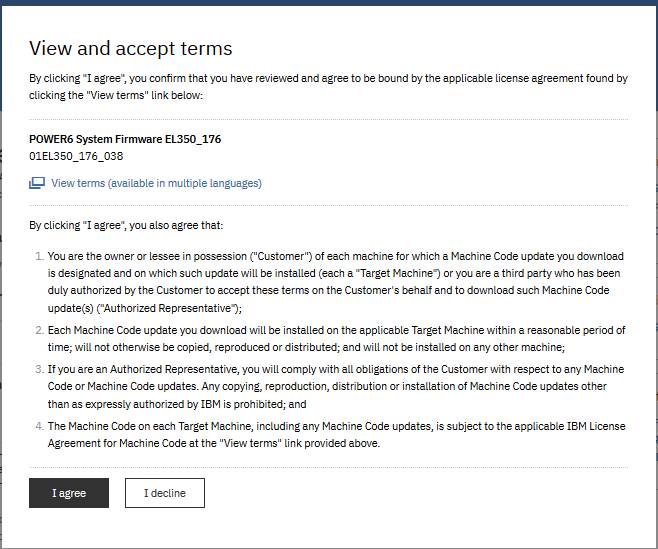 You can update the firmware concurrently (that is, the fixes that can be deployed on a running system without rebooting partitions or performing an IPL) within a specific release. Select the Change Licensed Internal Code option for the current release. 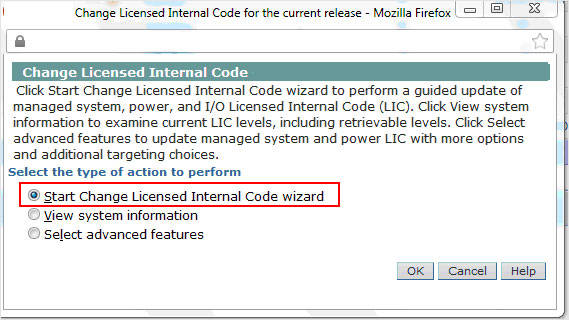 In the Specify LIC Repository section (as shown in Figure 4.2), select the location of the LIC update repository. 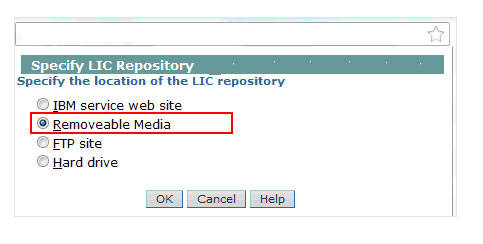 Select the DVD-RAM drive option,where you have the DVD placed and proceed with code update concurrently, as shown in Figure 4.3.

Note: Place the DVD in the HMC’s DVD drive (and not in the system’s DVD drive). 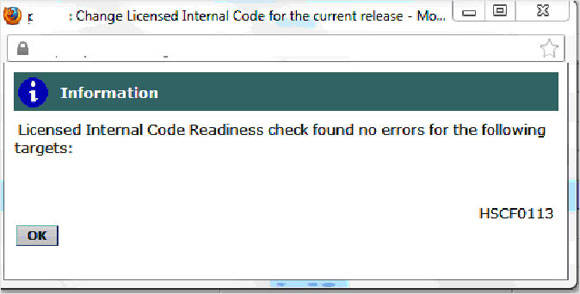 Click OK to proceed further to the subsequent steps to perform code update. It verifies whether the system is ready for code update by performing the health check and if everything fine, we can proceed further. 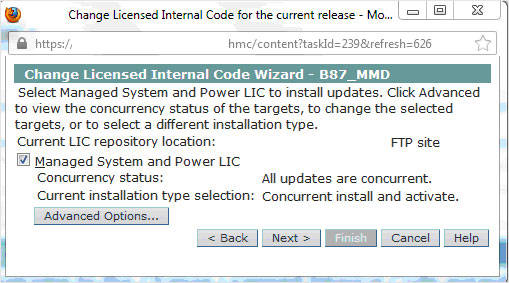 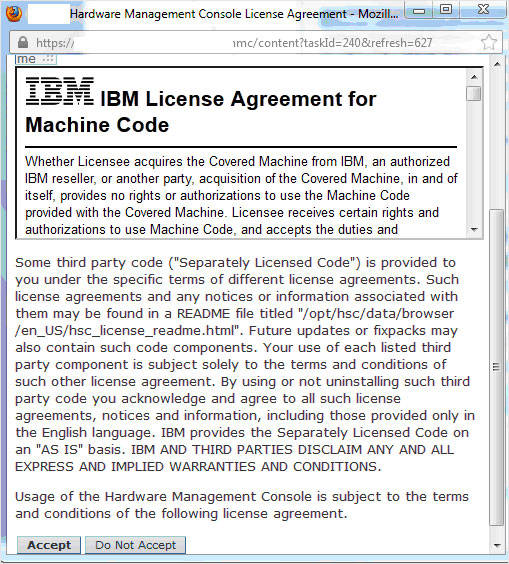 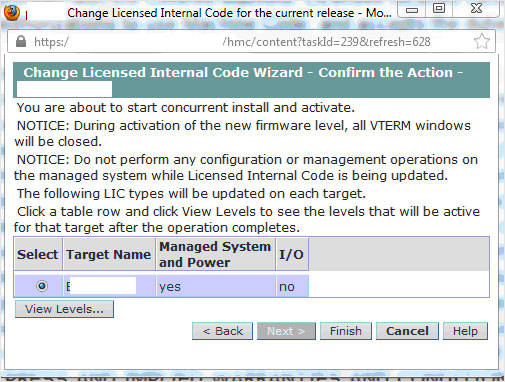 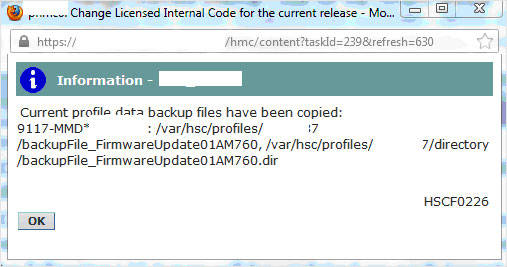 Section 5. Steps to update the firmware disruptively (that is, update requiring the system IPL within a specific release)

Firmware updates are usually concurrent. Disruptive update service packs are very rare. The procedure to perform disruptive update is quite similar to concurrent update (explained in Section 4) but this process will prompt for system power cycle during the operation.

We use the Select advanced features option to perform advanced operations, such as Remove and activate and Reject fix.

The Remove and activate option brings the system back to the update level that is on the permanent side. You can use this option to back off an update level. 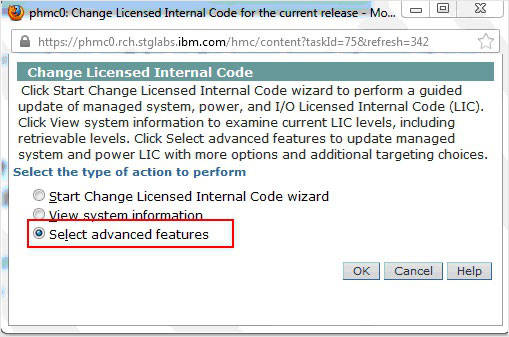 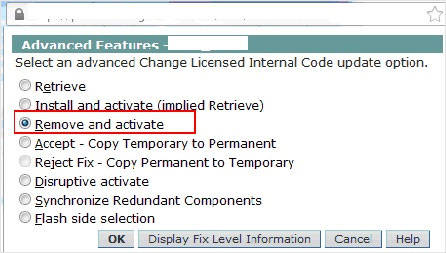 Click OK and then Close to remove and activate the permanent side update level.

Boot the system in the Permanent Side mode (from ASMI -> Power/Restart Control -> Power On/Off System, and make sure that the Current firmware boot side option is displayed as Permanent) and only then the Reject Fix option gets enabled and the operation can be performed. This operation copies the currently running level (permanent side) to the temporary side. This can be used to reject a fix that has been applied. 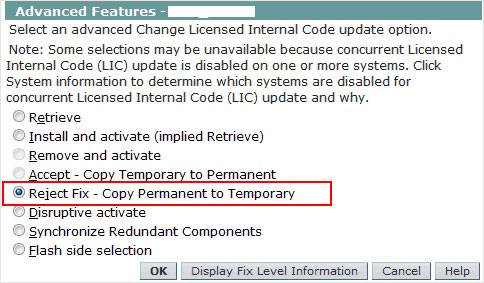 Installing a release or a disruptive fix pack causes system IPL. All release upgrades are disruptive.

We can obtain the upgrade code, that is, the disruptive fix pack from Fix Central and burn it to a media drive and proceed with the upgrade process, which is quite similar to the concurrent update process explained in the earlier sections (except that this operation is disruptive).

In this section, let us learn how to use the FTP method to upgrade the system using the firmware code stored in a remote repository. 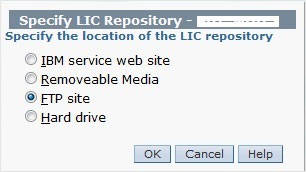 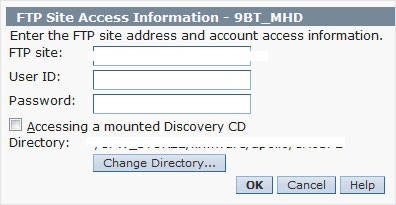 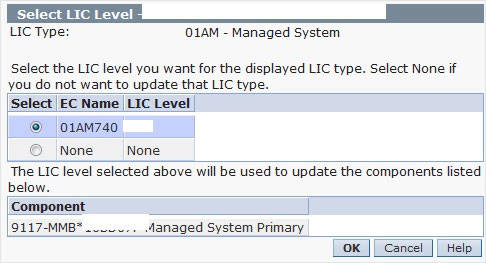 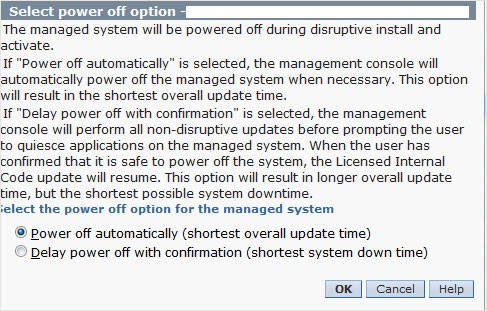 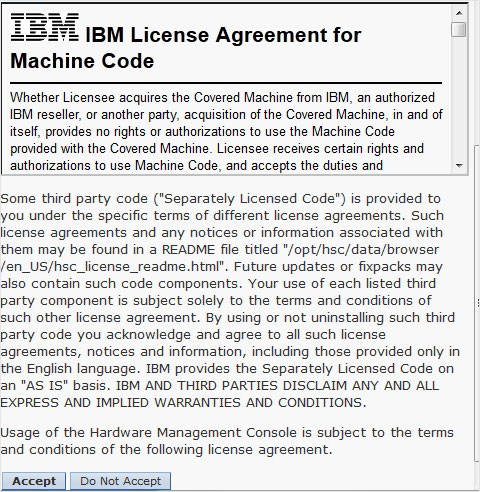 Clicking OK starts the disruptive upgrade. System will be on the applied release level after the upgrade operation completes.

Section 8. Steps to upgrade the firmware disruptively using the IBM service website to the required level

After logging in to the HMC, click System Management > Servers > Target Server on the left pane. Instead, you can also click the Updates icon on the same pane. All the available servers will be displayed in the right pane. In the following figure, the red highlight in the right pane shows the current level installed.

Make sure that your target server is in the shutdown mode, and if not, switch off the server.

Now, click the Upgrade Licensed Internal Code to a new release link at the bottom of the page as shown in the following figure.

After clicking the link, you will be directed to the web page which will show information about the readiness check. If there is no errors found, you can click OK and proceed further, as shown in the following figure.

After clicking OK, you will be directed to the Specify LIC Repository page. Here, you need to select the location of the code. The options shown in the following figure are available. 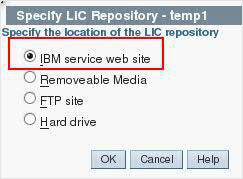 If you are setting a new server configuration, the best practice at this prompt is always to select the IBM service web site option and you need not worry about the need to power off and power on the managed systems in this method.

Be patient here and follow the prompts to complete the upgrade. The firmware upgrade activity will need time depending on your Internet bandwidth speed. Do not forget to switch on the server, so that the latest firmware gets activated and reflected in the navigation pane, as shown in the following figure.

Now you are done with the upgrade. Remember if you select multiple systems, you can upgrade them as well.