Protect your messages by encrypting connections

In other tutorials (the “Ready, set, connect” series and “Write and run your first IBM MQ JMS application“) we showed you how to set up and use point-to-point messaging between a JMS application and an MQ server. In these tutorials, the communication between the client and the server that flows over the internet was not encrypted. This meant that the contents of the message travelled in plain text and could have been viewed by a third party.

This tutorial will get you started with securing messages in transit through the use of Transport Layer Security (TLS) for MQ.

It’s important to note that the default developer configuration that are used in the other Ready, set, connect tutorials includes authentication and authorization controls for the app and admin users.

TLS is a cryptographic encryption protocol that protects data in transit. See Figure 1 for an explanation of how the TLS handshake between a client and a server works: 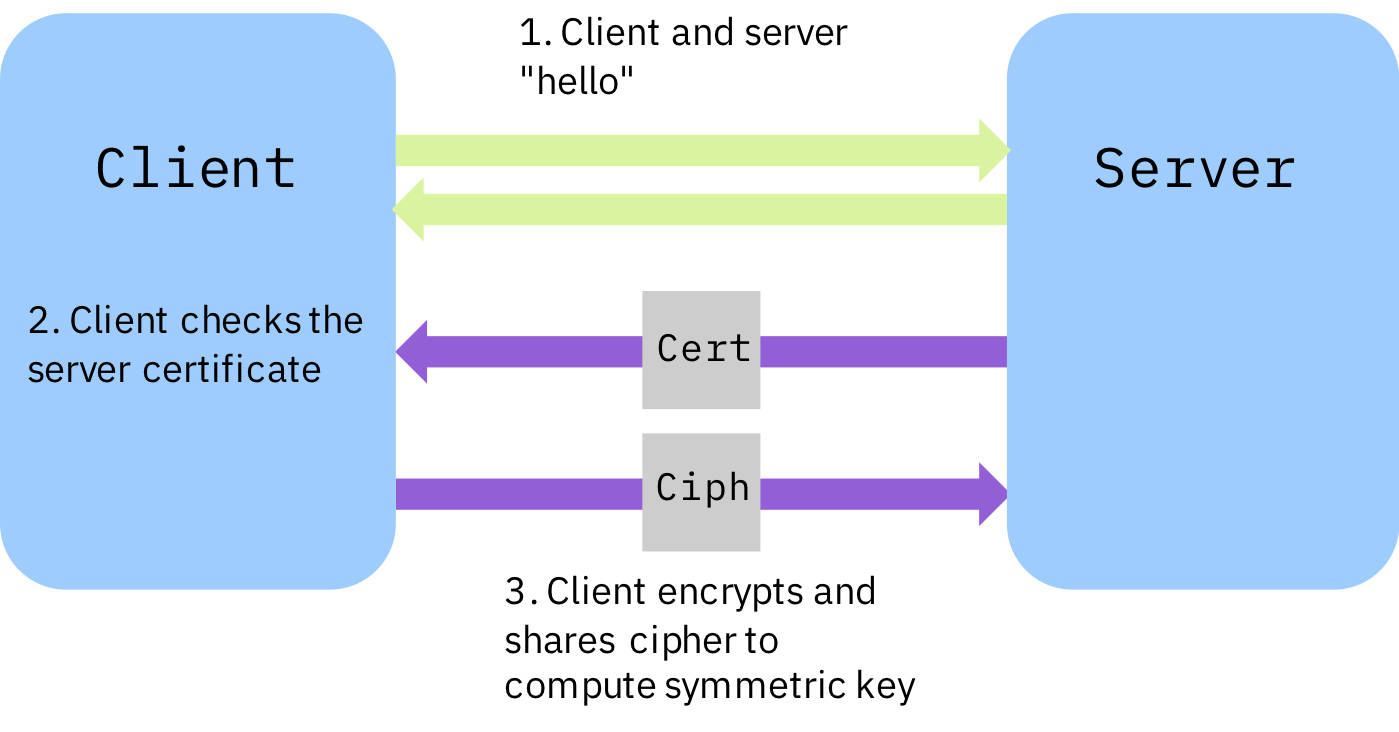 In this tutorial, we will set up the simplest configuration, in which we provide a certificate to the server side only.

How does TLS work in IBM MQ?

TLS is used in MQ to secure channels. It provides both integrity and encryption protection. When a channel is enabled for TLS, any messages that are passed by the channel will be protected while in transit. You can learn more about TLS in the IBM MQ documentation.

In a production environment, the queue manager will usually have a digital certificate issued by a certificate authority. Your MQ administrator should provide any certificates that you might need to use with your client application.

In this tutorial, we will be creating a self-signed certificate and extracting the public key from it for the client to use. A self-signed certificate is signed with its own private key; that is, “I am trustworthy because I say so.” It should not be used in a production environment, but it is useful in this example to understand how the TLS configuration works.

These are the steps we’ll go through to set up TLS:

Create a server key and certificate

To create the certificates we need to secure our channel, we will use OpenSSL, which is installed by default on most machines. Check if you have OpenSSL installed by entering this command in your terminal:

If you need OpenSSL, you need to download it.

Create a new directory on your machine and navigate into it in your terminal.

Now we can create the server key and certificate with this command:

You will be prompted to enter some information. Put whatever you like, it’s a self-signed certificate so it’s for your eyes only. Verify the certificate has been created successfully with this command:

You should see the information you entered and other certificate properties such as the public key and the signature algorithm.

The instructions for creating a client keystore differ slightly for Java code using the JMS API and code in other languages that use the MQ Client Libraries (such as C, Python, Node.js, or Golang).

For our example, we will be securing some Java code written for JMS. We will use keytool (a Java security tool), which is included with Java JREs and SDKs. To create a .jks client keystore and import our sever certificate into it, enter:

You will be prompted to create a password. Be sure to remember the password that you set as you’ll need it later on.

Listing the contents of the directory should yield something like this:

Now you should have only the .crt file and the .key file in your current directory. If this is not the case, the container will not work! You’ll need to return to the beginning of step 1 and check that you completed all of the tasks so that these files are in the right place.

If you’re using MQI, whatever language you write your application in (such as C, Python, Node.js, or Golang), these steps will help you create a client keystore and import our server certificate into it.

If you don’t have the MQ client libraries installed, it’s time to get them:

Now that you have the MQ client libraries, you’ll have the MQ security command line tool, runmqakm. Enter this command to create a keystore in .kdb format and store the password in a .sth file. In this example, we used the password passw0rd but you can change this to be one of your choosing.

Next, import the server’s public key certificate into the client keystore by entering this command:

If you list the contents of the current directory, you should see these files:

Now you should have only the .crt file and the .key file in your current directory. If this is not the case, the container will not work! You’ll need to return to the beginning of step 1 and check that you completed all of the tasks so that these files are in the right place.

Step 2. Set up the MQ server

Our first step in setting up the MQ server is to install or start Docker or Podman.

If you completed the “Get an IBM MQ queue for development in a container” tutorial, you installed either Docker or Podman in Step 1 and you installed MQ in the Docker image in Step 2. If you did not complete this tutorial, complete step 1 and step 2 in that tutorial now.

You are now ready to run a container from the latest MQ Docker image. If you completed the “Get an IBM MQ queue for development in a container” tutorial, you will need to stop this container by using the docker stop <container_id> command or you need to select different ports to map to on your host OS.

To run the latest MQ Docker image, enter the following commands in your terminal.

First, create a non-running container which creates and mounts a volume onto the container.

Next, specify the full path to the local directory that contains your .key and .crt files and copy the files over to the directory in the container with the following command:

Then, remove the container mq-tls-config-container:

This completes the initial set up and we can now enable TLS using the Volume created previously and the MQ Docker image.

Enter the following command in your terminal, which mounts the volume, tls-key-vol, onto a new container. In this example, we used the password passw0rd for the app user, but you should specify the one you used previously (the one set during the “Get an IBM MQ queue for development in a container” tutorial).

Note: If you’re using Windows in Hyper-V mode, you might have to add the directory with the .key and .crt files to file sharing in your Docker settings or Control Panel, or Docker might not be able to access it.

Enter the following command to see a container ID:

You should see output similar to this:

Be sure to make a note of your container ID as you will need this later on.

If your container is not running…

A common problem is not having the correct read permissions set on the key.key file. Since the user and group owners of this file will unlikely exist inside the container, and depending on your umask settings, we need to check if the file is readable inside the container.

Check the docker logs for the container:

If the key file cannot be read, you will see an error similar to:

The file permissions can then be changed with the chmod command:

Verify that security has been enabled

Let’s have a look at the queue manager to check that security has been enabled. Exec into the container with this command:

Then, enter this command:

This command allows you to use the MQSC interface for the queue manager. Find out about channel properties by entering this command: 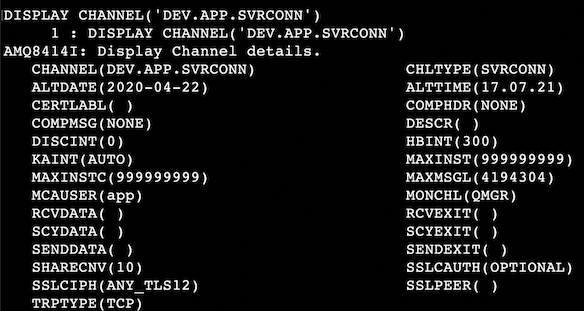 In this tutorial, we use anonymous (server-only) authentication, as we authenticate the client with the application name and password. The CERTLABL option is the label for the certificate we supplied implicitly during the Docker run step above.

We will need to specify the same CipherSpec on the client side for the client and server to be able to connect and carry out the TLS handshake.

Exit the MQSC interface with exit, and exit the container with exit too.

The instructions for securing an application differ slightly for JMS applications and MQI client applications (such as C, Python, Node.js, or Golang). Follow the set of steps based on your language.

Get a JMS application up and running

First, follow the steps in the “Write and run your first IBM MQ JMS application” to get up and running with a JMS sample application, JmsPutGet.java. Make sure that you have the hostname and port number set up to match the details of your new TLS-enabled container.

Run a JMS application without encryption

Let’s see what happens if we try to connect to the queue manager without encryption on the client side.

The connection is rejected by the queue manager, with a lot of errors. You’ll see an MQRC_JSSE_ERROR, as well as a Remote CipherSpec error for channel DEV.APP.SVRCONN as we didn’t specify an encryption cipher on the client side. The stack will have parts that look like this:

If your failed with a different error, try our handy cheatsheet to help you debug the error.

Let’s add encryption to the client application. We’ll choose a specific ANY_TLS12-compatible CipherSpec but you can also set the spec to be *TLS12. Edit the JmsPutGet.java sample to add this line underneath the other connection factory properties:

Compile as above. When running, use this command, which includes setting some environment variables. You’ll need to edit the command before you run it to add in the fully qualified name of your trust store and its password. 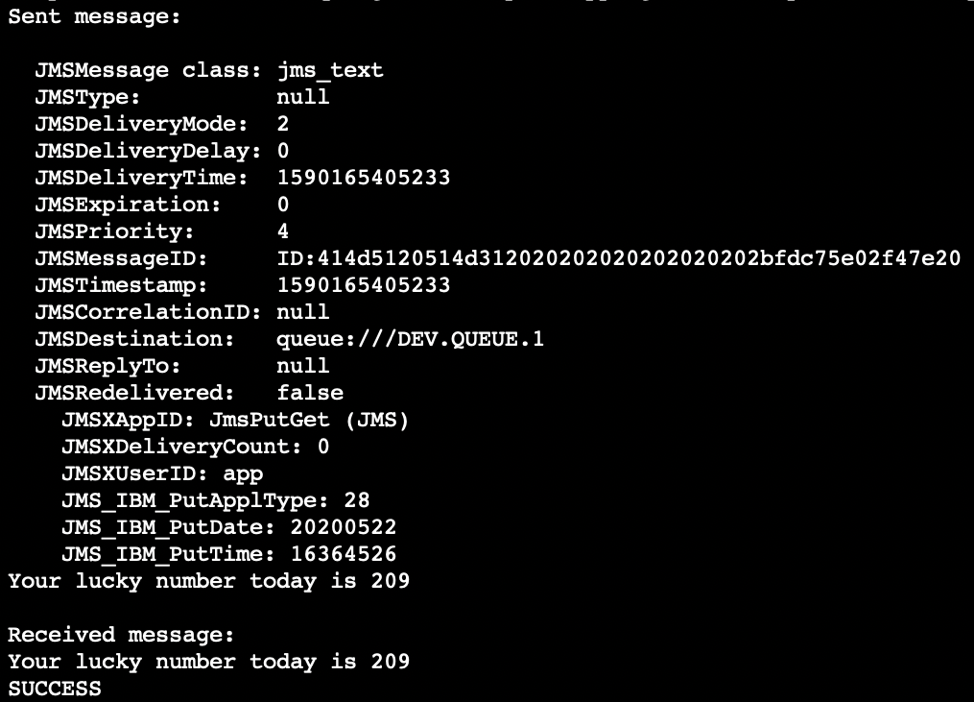 Note: the -Dcom.ibm.mq.cfg.useIBMCipherMappings=false argument in the run command was necessary as we are using a non-IBM JRE. If you want to use an IBM JRE, simply remove this argument.

For this tutorial, we’re only showing an example in one language: Python. For high-quality sample code securing other languages, have a look here. We’re assuming you have a Python installation and are in a Python environment where you’re happy to develop MQ applications.

Get a python application up and running

The MQ client functionality is implemented in Python with PyMQI, which is an open-source Python wrapper over the MQ client. Installing it is as easy as typing the following command in your terminal:

Let’s try and connect to an encrypted channel and send a message using an unencrypted Python program. Copy this (simple) Python program (which puts and then gets a message from a queue) and save it as a .py file:

Run a python application without encryption

Now we have our Python application, run it with this command:

The connection will be rejected by the queue manager, and you will see an error message as part of the returned output:

This is because our unencrypted Python application tried to connect to an encrypted channel, which throws the error above.

Let’s add encryption to our client application. We’ll choose a specific ANY_TLS12-compatible CipherSpec but you could also set the spec to be ANY_TLS12. After the cd.TransportType = pymqi.CMQC.MQXPT_TCP line, add these lines:

Add the sco variable into your connect_with_options function like this:

Run your application again, and you should see:

You should now understand what needs to be configured on the MQ server and the client application side, to use TLS with MQ. You have enabled the client and the server to communicate privately and securely using a self-signed certificate. Remember to upgrade to a real certificate before you put your apps into production!