Vector data is a type of geospatial data that contains information about the geometric location in the form of coordinates. These coordinates can be a point, line, or polygon. Vector data can be useful for inferring geographic information. For example, with the latitude and longitude of two different cities, the distance between them can be calculated.

To complete this tutorial, you need:

To load data into a notebook, you need an Access token.

Because the required libraries are not installed in the default Python environment, you must create a customized environment by using conda create. However, because the environment is running in IBM Cloud, there are a few steps to go through.

Now you can use this new environment to run notebooks

Load and run a notebook

To add a new notebook:

The notebook loads. Follow the instructions in the notebook, and run all cells. Then, return to this tutorial.

The following list provides some of the capabilities of vector data that you explore with GeoPandas in Python.

The notebook associated with this tutorial displays these functions of GeoPandas.

In addition to using GeoPandas, which is an extension to pandas, we use Shapely to define geometric objects and matplotlib to visualize some of the features. The following image shows the list of imports that were used.

We begin by creating a simple DataFrame using pandas. The following image shows sample vector data that contains the latitude and longitude information of the different cities.

We then create an additional column named point that combines the longitude and latitude columns from the DataFrame defined previously. The entries in this column are converted into a Point object by initializing it using Shapely. This column is named geometry.

The following figure is the code snippet that shows how a GeoDataFrame is created by extending an existing DataFrame. We drop the point column now because it is not needed any longer.

This new GeoDataFrame has the same attributes and methods defined as a pandas DataFrame. For example, the code in the following figure shows how the mean of the population column and the minimum of the area column is calculated.

The following image shows the code that illustrates how density is calculated using population and area. Nothing so far has changed with this GeoDataFrame in terms of its property of a pandas DataFrame.

But there are several additional attributes and methods that come with this GeoDataFrame. When a method or attribute is applied, it is applied on the geometry column. The complete list of the function can be found in the API Reference. Let’s begin by looking at some of the popular built-in attributes. They are area, bounds, total_bounds, and geom_type.

Because our cities DataFrame only contains Points, area returns a GeoSeries of 0s.

total_bounds returns the minimum and maximum bounds of x and y coordinates across entries from the DataFrame.

geom_type returns the geometry type of each entry. A GeoDataFrame can have more than one type of geometry.

In the following example, distance helps calculate the distance of each of the four other cities from London.

We now create another GeoDataFrame, which is a subset of the original cities data set. By dropping two rows from the original data set, let’s try a few other attributes and methods to further understand the capabilities of GeoPandas.

area returns a similar DataSeries similar to the one we saw previously.

geom-type is the same as we saw previously for the cities data set.

The centroid method returns a GeoSeries of the center point for each geometry. In the case of a Point, the point itself is removed. However, the behavior on the Line or Polygon geometry will be different.

The representative-point method returns a point that is guaranteed to be within the geometry. It could be the centroid, but not necessarily. Similar to centroid, for a Point geometry the point itself is returned.

Points versus Lines versus Polygons

Because we used Shapely to previously define Points in the cities GeoDataFrame, we can use the squeeze method to extract the points that represent each city. The following image shows the code for this.

By combining two points and applying Shapely’s LineString object, a GeoSeries representing the line is built. The following code snippet shows how several lines are constructed between cities using this method.

Three or more points can be combined in a similar way to form a polygon. Shapely has a Polygon interface to define this polygon and create a GeoSeries. 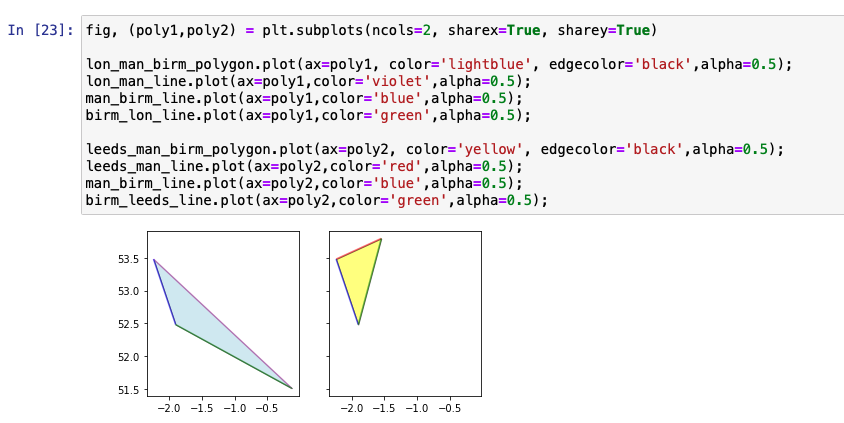 The graph shown in the previous image shows lines between each city in different colors and the two polygons that are formed by connecting three cities. We use the built-in plot method to represent the graph.

To observe interactions between more than one data set, we use the overlay library. union, difference, symmetrical difference, and intersection are some of the operations that can be performed.

The following figure shows the union of the two polygons displayed in the previous graph.

Buffer is the method of adding a buffer around the object to identify the area. The unit and the measure of the buffer varies based on the use case. Buffer can be applied to a point, line, or polygon, and the result is always a polygon.

In the following code, we create a DataFrame with just one row to show how the buffer size varies based on the distance provided each time to the same entry.

The inner red dot in the following graph represents the actual point. The three other concentric rings around this point represent different buffer sizes. An example to applying buffer is to identify what amount of area from the epicenter of a virus needs to be quarantined. 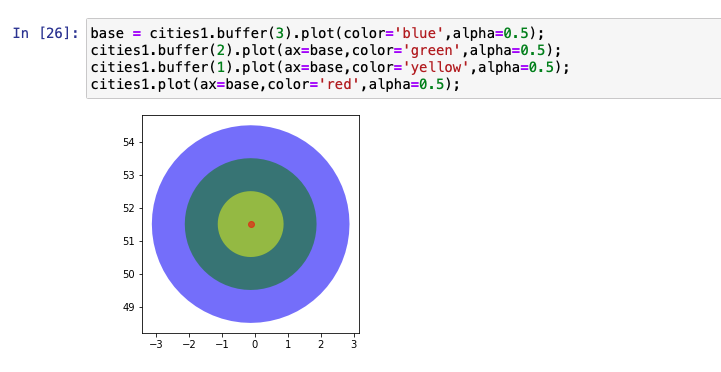 GeoPandas provides several binary predicates that can be applied to a GeoDataFrame to understand the relationship between two data sets. For example, consider the two data sets, cities and cities2 that we set up in this tutorial. The following figures help you to better visualize the results.

contains is one of the most popular relationship test methods used. We provide four different examples of contains that can be used to find relationships between geospatial features or geometries.

To calculate what points from cities2 exist in the cities data set, we use the following code.

To find out which geometries in the cities2 data set contains London, we use the following code.

To display the entry of the previous query, we call the entry as stated below.

The following figure shows similar code for finding out which entry contains the Manchester data point.

within is another relationship test that is used to find whether a point lies within another. The following figures show examples of the input and output of how within can be used. intersects, crosses, and disjoint are also used to in the same way, as shown below.

When we want to combine the geography of one or more rows within the same data set, we use the dissolve method. This can be useful to get a macro level view of the geometric objects from either the subset or the entire data set. To show how dissolve works, we create the following GeoDataFrame by loading a JSON file from the URL.

We create a column named all and set it to 1 so that all rows are aggregated into one row. The aggregate function parameter – aggfunc can be one of first, last, min, max, sum, mean, or median to indicate how the number fields need to be aggregated. The following example indicates that information from all rows needs to be added.

Notice how all individual polygons are combined into one Multipolygon. The fine lines that separated each of these boroughs as shown in the graph are not present in the graph. The axis label is turned off, and the size of the plot is increased to get some more clarity. 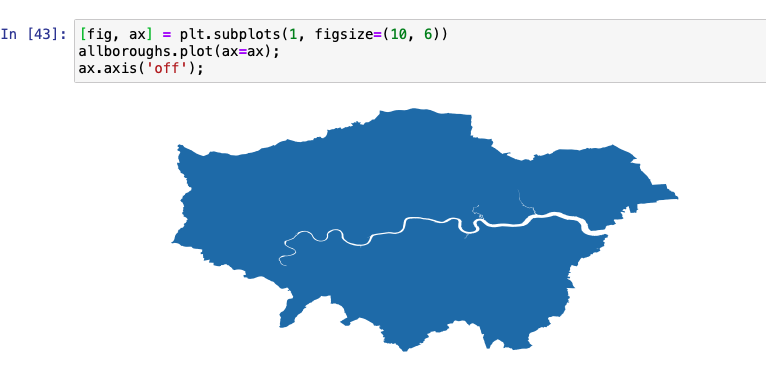 join is used to combine rows from multiple data sets into one.

We first create a pandas DataFrame by importing a .csv file. Notice how the number of rows is 5 and number of columns is 84 on this DataFrame. The original boroughs DataFrame has just 6 columns.

After setting the index column to code and then applying join, we notice that the new GeoDataFrame contains the same number of rows, which is 5, but the column is now 89, which is an addition of columns from both DataFrames.

The following code shows classifying and visualizing inner and outer boroughs of London. This is done by applying dissolve on the Inner/_Outer_London column and using mean as the aggregate function.

In the following example, we create an average gender pay gap map. We do this by creating a column named paygap that holds the average pay gap. We then plot the pay gap information on the boroughs plot. 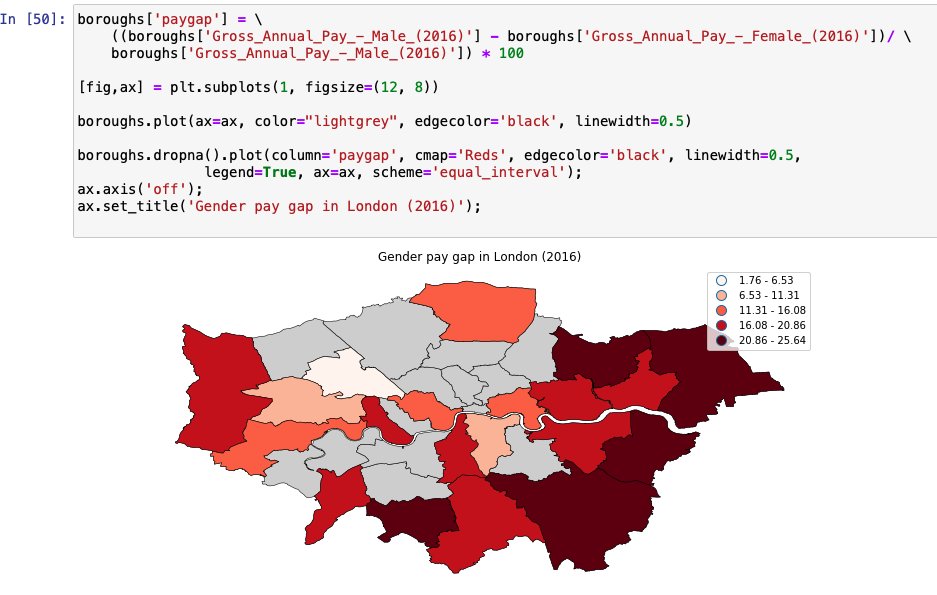 Open Street Map (OSM) is open source map information that is contributed by a community of mappers. In the last section of the notebook, we use data from OSM with information about points of interest (POIs) in and around London. Combining this information along with the boroughs data set from the previous section, interesting inferences are made and visual maps are constructed. We encourage you to run this section of the notebook to get more practice with vector geospatial data.

This tutorial walked you through the basics of geospatial vector data. It gave you an overview of ways to analyze data using GeoPandas, Shapely, and matplotlib in Python. It also gave you code snippets for defining Shapely objects and using different attributes and methods. We discussed, overlay, buffer, spatial relationships, dissolve and join. Finally, we gave an overview of how OSM data is used in the notebook.