In its nascent years, artificial intelligence (AI) focused heavily on rule-based systems that would make predictions using predefined sets of rules that had to be provided by a subject matter expert. However, these systems were brittle and relied on these “expert opinions,” which eventually caused them to fall out of fashion. As the scale and amount of data increased, these methods were replaced by a more data-driven approach, machine learning.

Machine learning is a collection of algorithms and tools that help machines understand patterns within data and use this underlying structure to perform reasoning about a given task. There are many ways that machines aim to understand these underlying patterns. But how does machine learning relate to deep learning? In this article, we provide an overview of how deep learning fits into this realm and also discuss some of its applications and challenges. 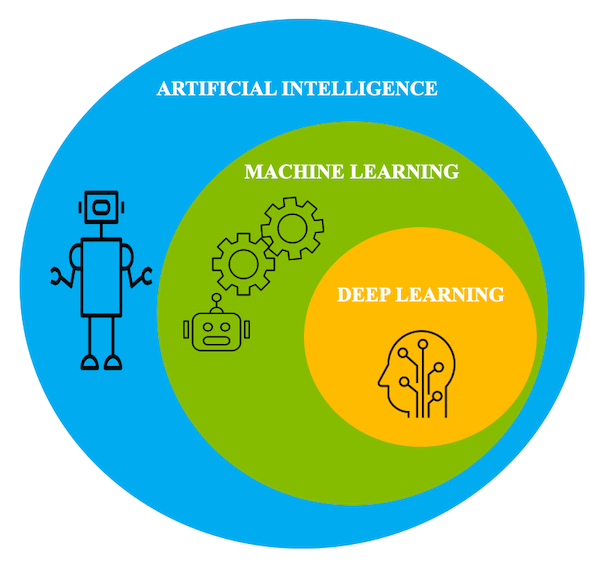 To put things in perspective, deep learning is a subdomain of machine learning. With accelerated computational power and large data sets, deep learning algorithms are able to self-learn hidden patterns within data to make predictions.

In essence, you can think of deep learning as a branch of machine learning that’s trained on large amounts of data and deals with many computational units working in tandem to perform predictions.

The magic of deep learning starts with the humble perceptron. Similar to how a “neuron” in a human brain transmits electrical pulses throughout our nervous system, the perceptron receives a list of input signals and transforms them into output signals.

The perceptron aims to understand data representation by stacking together many layers, where each layer is responsible for understanding some part of the input. A layer can be thought of as a collection of computational units that learn to detect a repeating occurrence of values.

Each layer of perceptrons is responsible for interpreting a specific pattern within the data. A network of these perceptrons mimics how neurons in the brain form a network, so the architecture is called neural networks (or artificial neural networks).

This section provides an overview of the architecture behind deep learning, artificial neural networks (ANN), and discusses some of the key terminology. 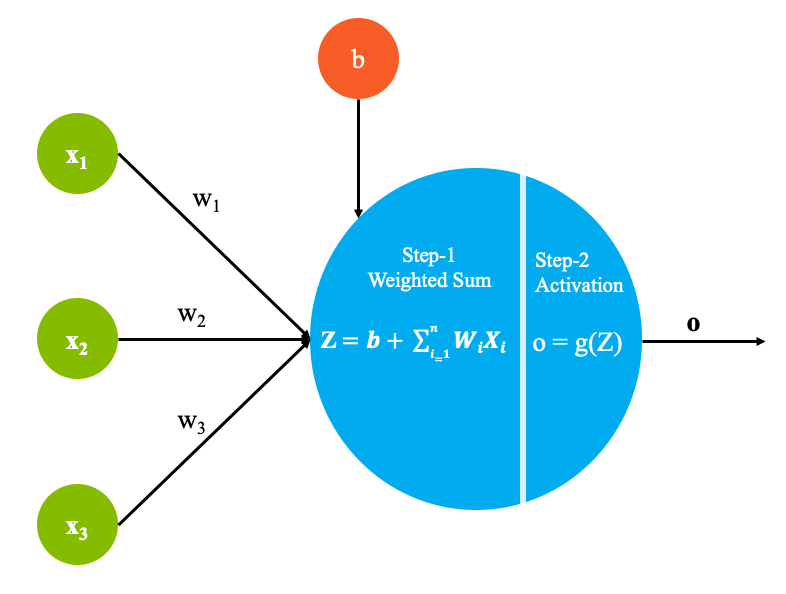 For example, a sigmoid function maps values to the range [0,1], which is useful if you want your system to predict probabilities. Doing so lets you model complex non-linear decision boundaries.

In the previous section, you saw the calculations that happen within each perceptron. Now, you’ll see how these perceptrons fit inside the network and how the flow is completed.

In its most basic form, a neural network contains three layers: input layer, hidden layer, and output layer. As shown in the following figure, a network with just one hidden layer is termed a shallow neural network. 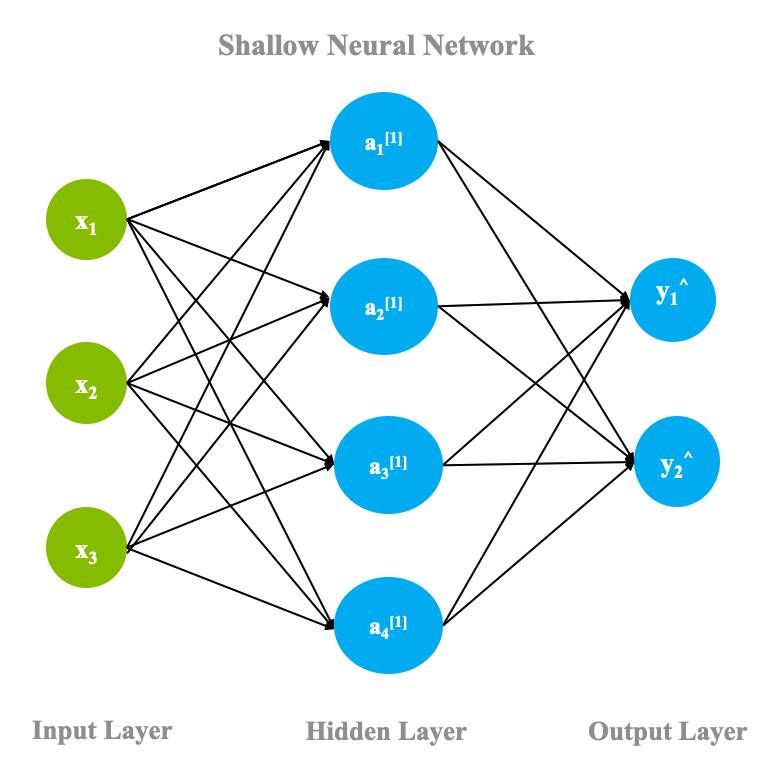 The computations discussed in the previous sections happen for all neurons in a neural network including the output layer, and one such pass is known as forward propagation. After one forward pass is completed, the output layer must compare its results to the actual ground truth labels and adjust the weights based on the differences between the ground truth and the predicted values. This process is a backward pass through the neural network and is known as backpropagation. While the mathematics behind back propagation are outside the scope of this article, the basics of the process can be outlined as follows:

The result of one pass of forward propagation and backpropagation is a change to the network layers’ weights and brings the system closer toward modeling the data set provided to it. Because this process uses the gradient to minimize the overall error, the process of converging the neural networks’ parameters to the optimum is called gradient descent.

The word ‘deep’ in deep learning is attributed to these deep hidden layers and derives its effectiveness from it. Selecting the number of hidden layers depends on the nature of the problem and the size of the data set. The following figure shows a deep neural network with two hidden layers. 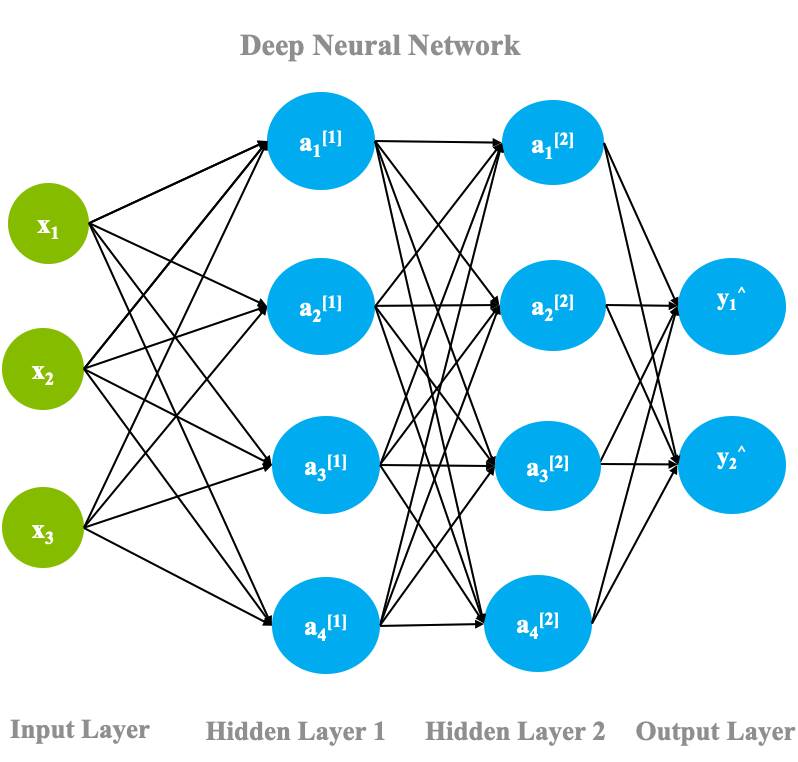 Deep learning has a plethora of applications in almost every field such as health care, finance, and image recognition. In this section, let’s go over a few applications.

Though deep learning methods gained immense popularity in the last 10 years or so, the idea has been around since the mid-1950s when Frank Rosenblatt invented the perceptron on an IBM® 704 machine. It was a two-layer-based electronic device that had the ability to detect shapes and do reasoning. Advancements in this field in recent years are primarily because of the increase in computing power and high-performance graphical processing units (GPUs), coupled with the large increase in the wealth of data these models have at their disposal for learning, as well as interest and funding from the community for continued research. Though deep learning has taken off in the last few years, it does come with its own set of challenges that the community is working hard to resolve.

The deep learning methods prevalent today are very data hungry, and many complex problems such as language translation don’t have sophisticated data sets available. Deep learning methods to perform neural machine translation to and from low-resource languages often perform poorly, and techniques such as domain adaptation (applying learnings gained from developing high-resource systems to low-resource scenarios) have shown promise in recent years. For problems such as pose estimation, it can be arduous to generate such a high volume of data. The synthetic data the model ends up training on differs a lot in reality from the “in-the-wild” setup in which the model ultimately needs to perform.

Another dimension that tends to be an issue is the underlying bias in the data itself, which can lead to poor performance of the model on crucial subsets of the data. Learning agents that use a reward-based mechanism sometimes stop behaving ethically because all they require to minimize system error is to maximize the reward they accrue. This example shows how the agent simply stopped playing the game and ended up in an infinite loop of collecting reward points. While it might be acceptable in a game scenario, wrong or unethical decisions can have a profound negative impact in the real world. A strong need exists to allow models to learn in a balanced fashion.

IBM has an open source toolkit, AI360, which is a toolkit to detect, investigate, and mitigate bias in deep learning algorithms. As deep learning researchers, it’s important for us to keep these challenges in mind while designing and conducting these experiments.

Armed with all the information in this article, you are now ready to go deeper into your journey of deep learning. There are several variations and additions to the artificial neural network that help with achieving unseen levels of accuracy for different applications. Stay tuned for more articles in this series.