Connectionist architectures have existed for more than 70 years, but new architectures and graphical processing units (GPUs) brought them to the forefront of artificial intelligence. Deep learning isn’t a single approach but rather a class of algorithms and topologies that you can apply to a broad spectrum of problems.

While deep learning is certainly not new, it is experiencing explosive growth because of the intersection of deeply layered neural networks and the use of GPUs to accelerate their execution. Big data has also fed this growth. Because deep learning relies on training neural networks with example data and rewarding them based on their success, the more data, the better to build these deep learning structures.

The number of architectures and algorithms that are used in deep learning is wide and varied. This section explores six of the deep learning architectures spanning the past 20 years. Notably, long short-term memory (LSTM) and convolutional neural networks (CNNs) are two of the oldest approaches in this list but also two of the most used in various applications. 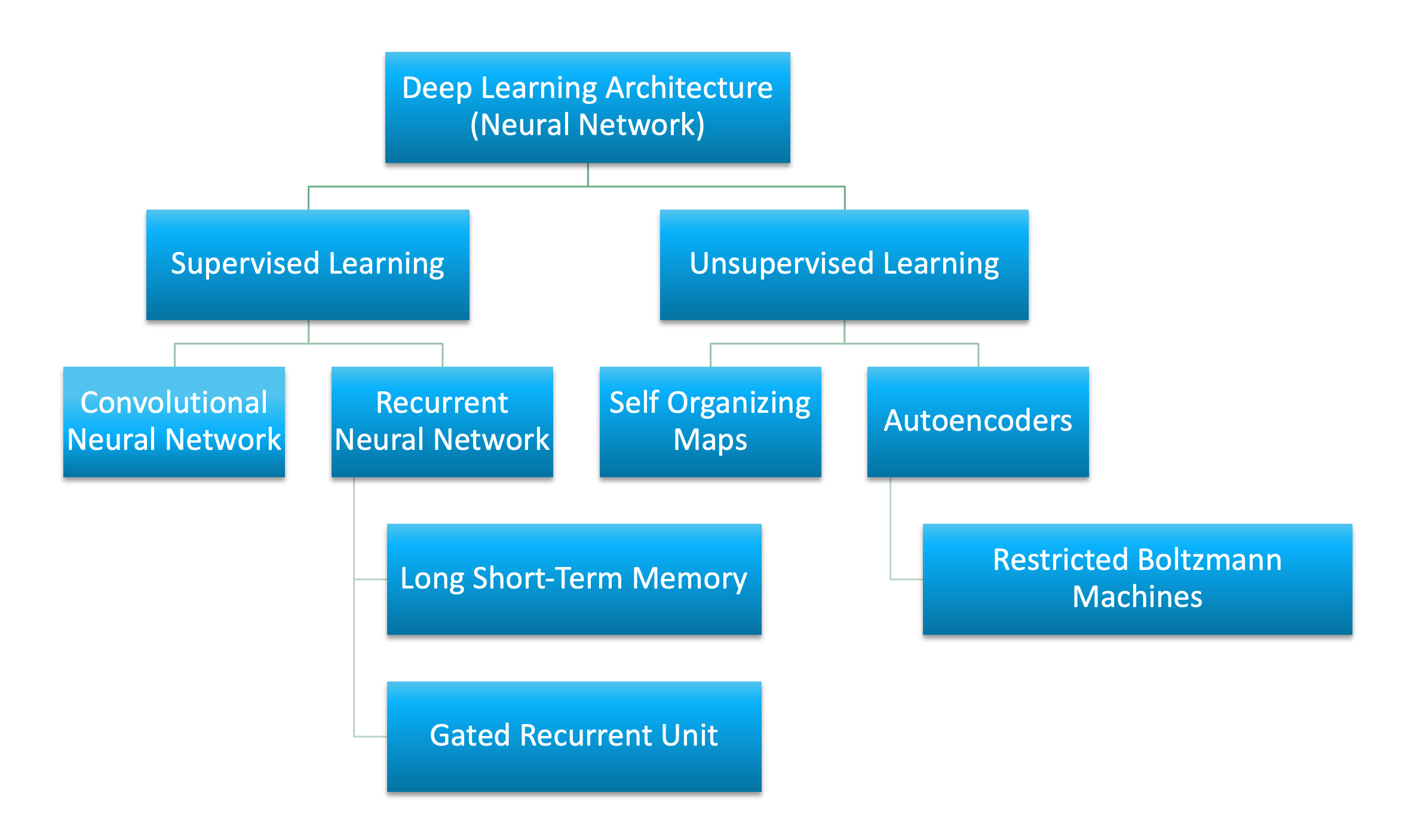 Supervised learning refers to the problem space wherein the target to be predicted is clearly labelled within the data that is used for training.

In this section, we introduce at a high-level two of the most popular supervised deep learning architectures – convolutional neural networks and recurrent neural networks as well as some of their variants.

The LeNet CNN architecture is made up of several layers that implement feature extraction and then classification (see the following image). The image is divided into receptive fields that feed into a convolutional layer, which then extracts features from the input image. The next step is pooling, which reduces the dimensionality of the extracted features (through down-sampling) while retaining the most important information (typically, through max pooling). Another convolution and pooling step is then performed that feeds into a fully connected multilayer perceptron. The final output layer of this network is a set of nodes that identify features of the image (in this case, a node per identified number). You train the network by using back-propagation. 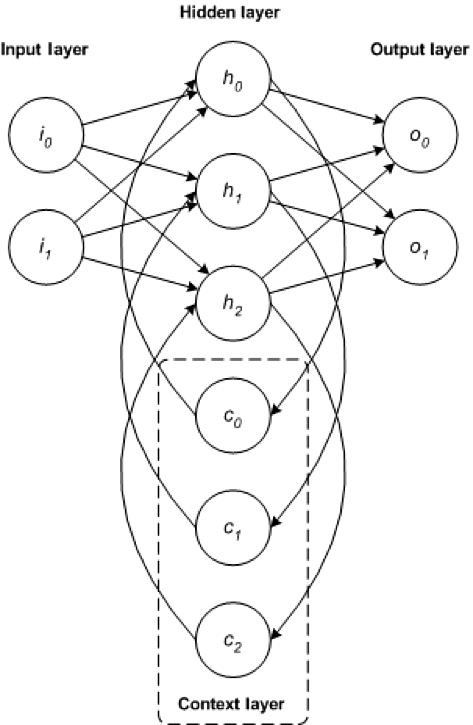 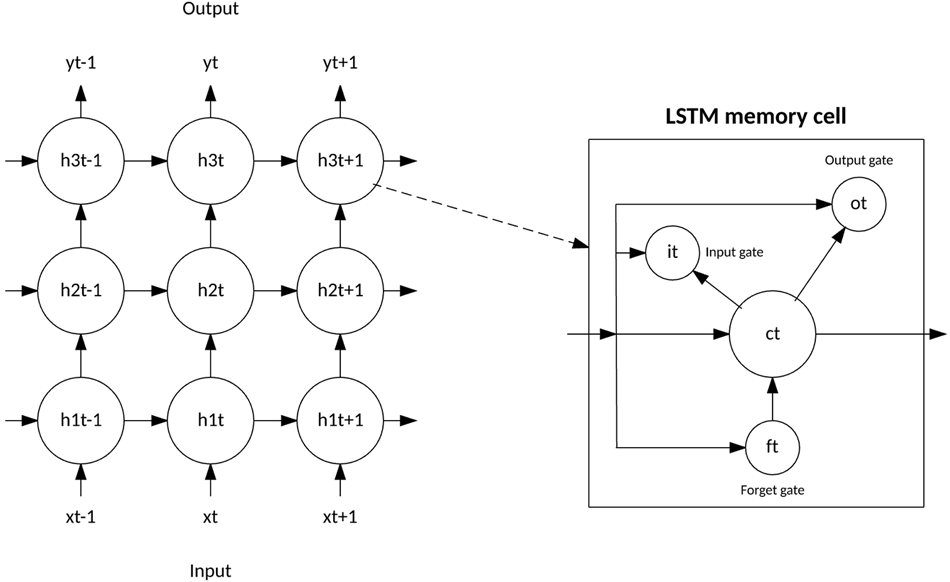 In 2014, a simplification of the LSTM was introduced called the gated recurrent unit. This model has two gates, getting rid of the output gate present in the LSTM model. These gates are an update gate and a reset gate. The update gate indicates how much of the previous cell contents to maintain. The reset gate defines how to incorporate the new input with the previous cell contents. A GRU can model a standard RNN simply by setting the reset gate to 1 and the update gate to 0. 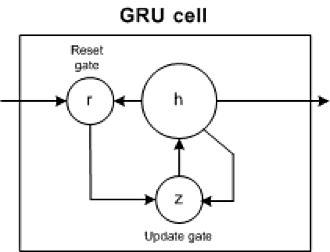 The GRU is simpler than the LSTM, can be trained more quickly, and can be more efficient in its execution. However, the LSTM can be more expressive and with more data can lead to better results.

Unsupervised learning refers to the problem space wherein there is no target label within the data that is used for training.

Self-organized map (SOM) was invented by Dr. Teuvo Kohonen in 1982 and was popularly known as the Kohonen map. SOM is an unsupervised neural network that creates clusters of the input data set by reducing the dimensionality of the input. SOMs vary from the traditional artificial neural network in quite a few ways. 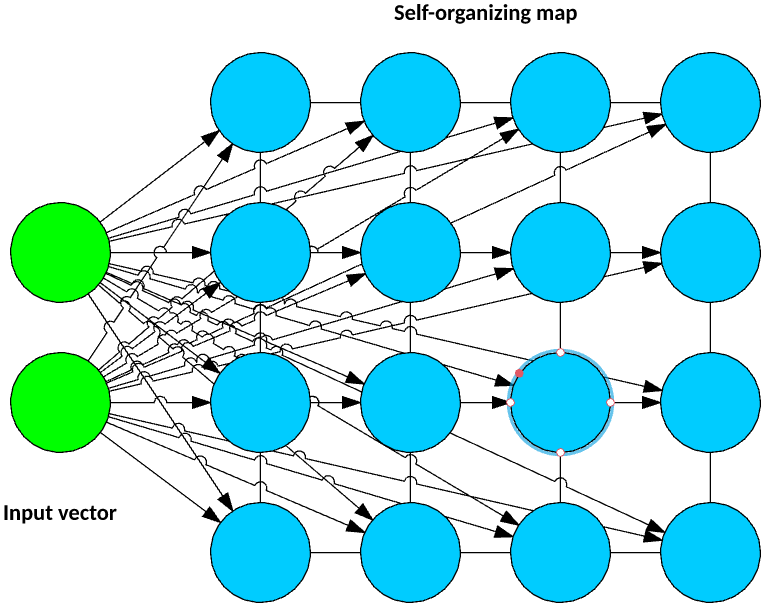 The first significant variation is that weights serve as a characteristic of the node. After the inputs are normalized, a random input is first chosen. Random weights close to zero are initialized to each feature of the input record. These weights now represent the input node. Several combinations of these random weights represent variations of the input node. The euclidean distance between each of these output nodes with the input node is calculated. The node with the least distance is declared as the most accurate representation of the input and is marked as the best matching unit or BMU. With these BMUs as center points, other units are similarly calculated and assigned to the cluster that it is the distance from. Radius of points around BMU weights are updated based on proximity. Radius is shrunk.

Next, in an SOM, no activation function is applied, and because there are no target labels to compare against there is no concept of calculating error and back propogation.

Though the history of when autoencoders were invented is hazy, the first known usage of autoencoders was found to be by LeCun in 1987. This variant of an ANN is composed of 3 layers: input, hidden, and output layers. 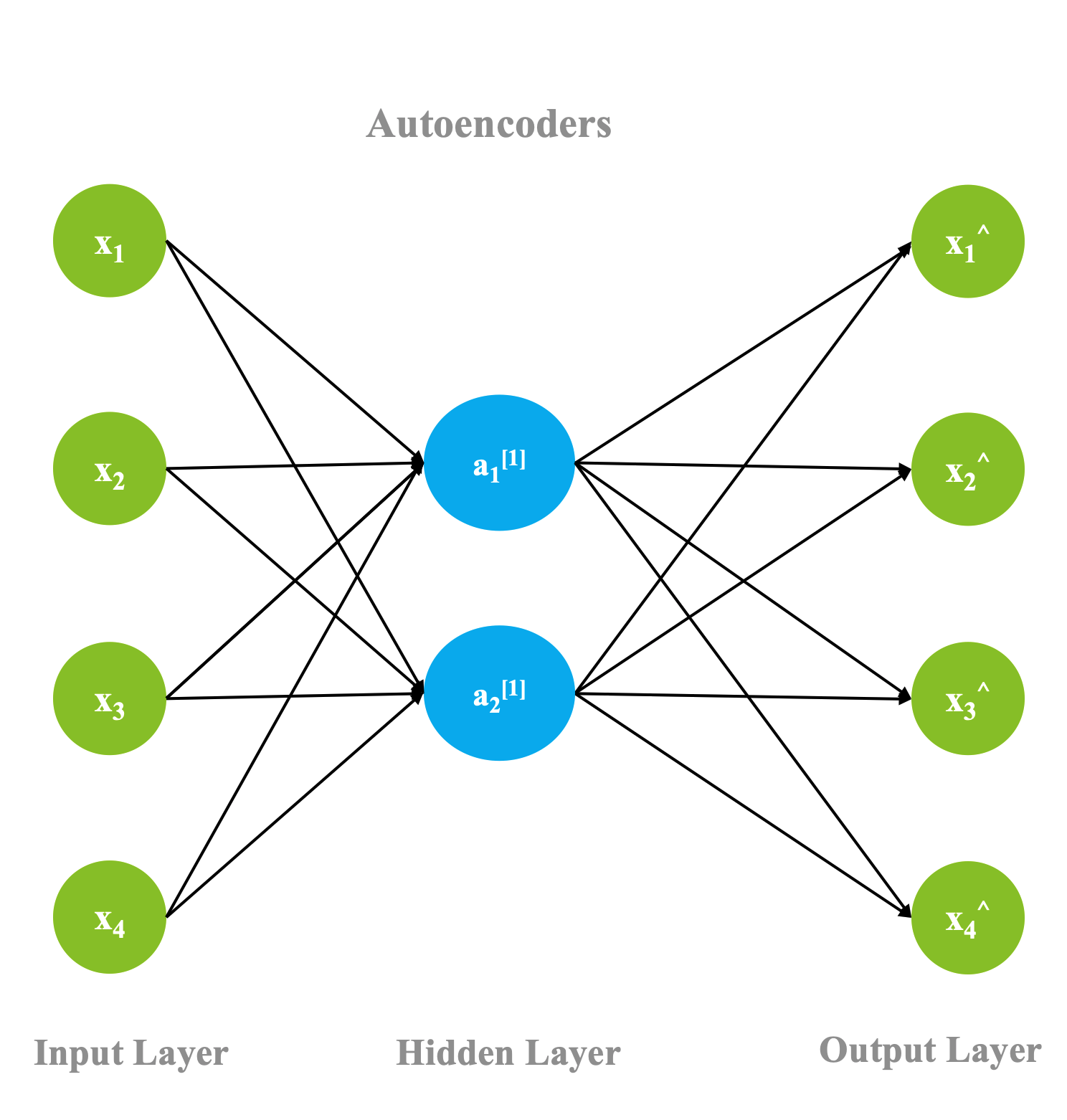 During the training phase, the difference between the input and the output layer is calculated using an error function, and the weights are adjusted to minimize the error. Unlike traditional unsupervised learning techniques, where there is no data to compare the outputs against, autoencoders learn continuosly using backward propagation. For this reason, autoencoders are classified as self supervised algorithms.

Though RBMs became popular much later, they were originally invented by Paul Smolensky in 1986 and was known as a Harmonium. 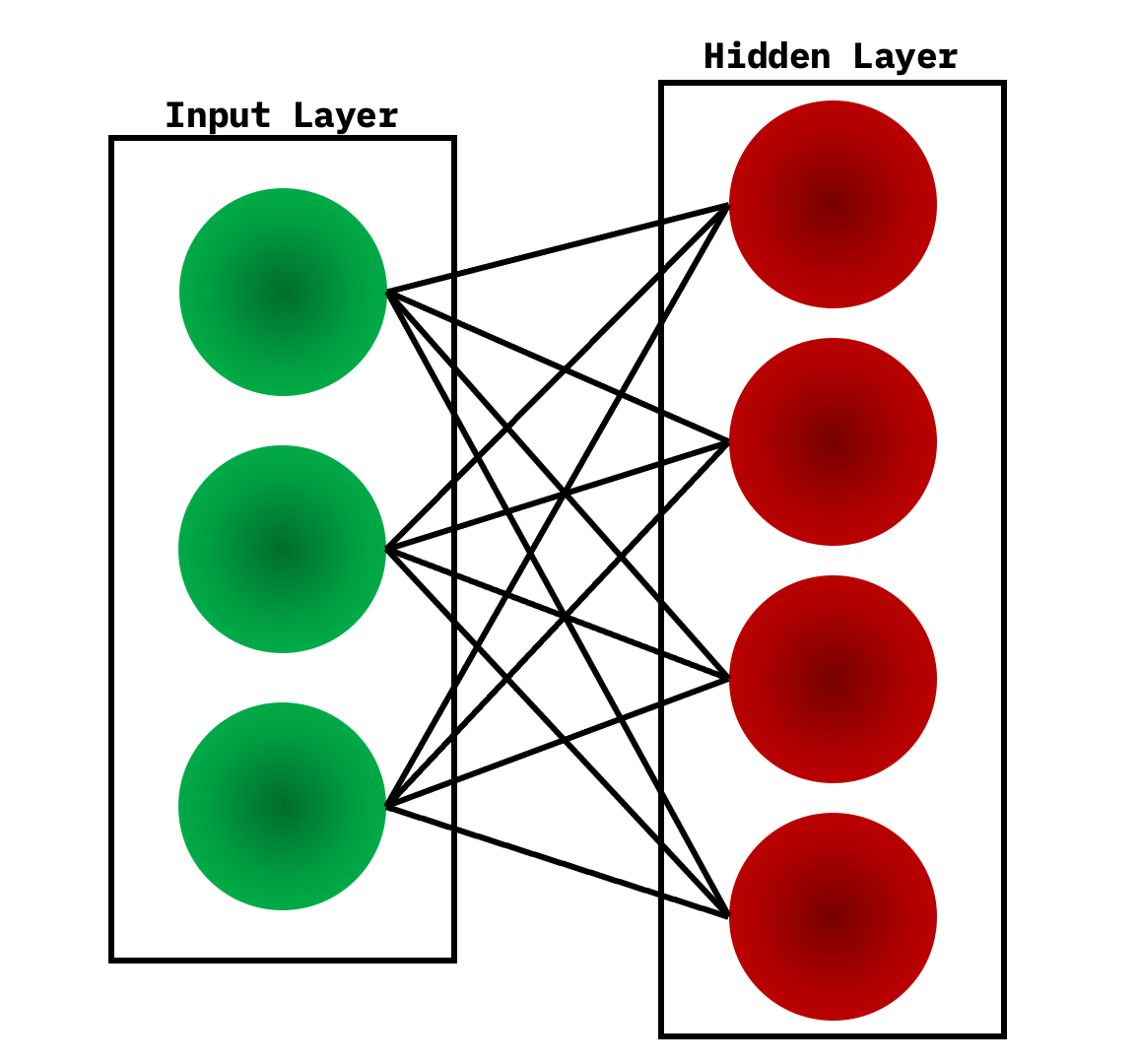 During the training phase, RBMs calculate the probabilty distribution of the training set using a stochastic approach. When the training begins, each neuron gets activated at random. Also, the model contains respective hidden and visible bias. While the hidden bias is used in the forward pass to build the activation, the visible bias helps in reconstructing the input.

Because in an RBM the reconstructed input is always different from the original input, they are also known as generative models.

Also, because of the built-in randomness, the same predictions result in different outputs. In fact, this is the most significant difference from an autoencoder, which is a deterministic model.

The DBN is a typical network architecture, but includes a novel training algorithm. The DBN is a multilayer network (typically deep and including many hidden layers) in which each pair of connected layers is an RBM. In this way, a DBN is represented as a stack of RBMs. 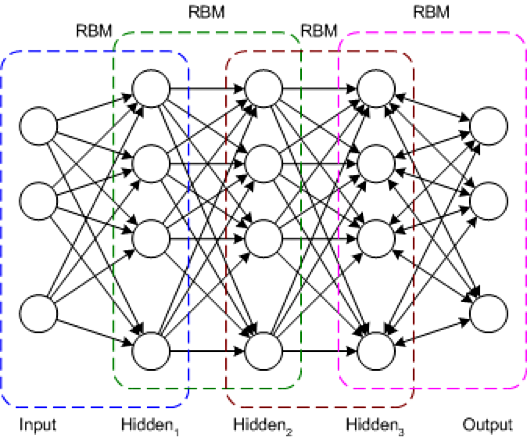 The final architecture is the DSN, also called a deep convex network. A DSN is different from traditional deep learning frameworks in that although it consists of a deep network, it’s actually a deep set of individual networks, each with its own hidden layers. This architecture is a response to one of the problems with deep learning, the complexity of training. Each layer in a deep learning architecture exponentially increases the complexity of training, so the DSN views training not as a single problem but as a set of individual training problems. 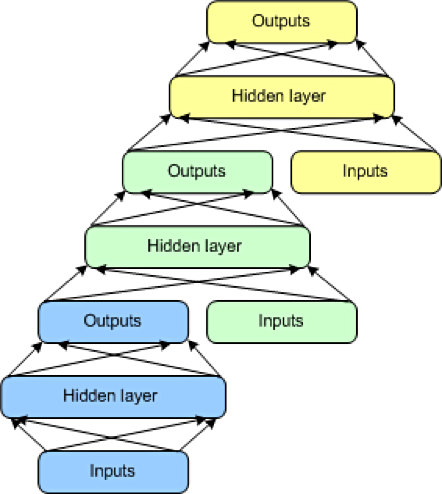