Apache Kafka is designed and optimized to be a high-throughput, low-latency, fault-tolerant, scalable platform for handling real-time data feeds. Kafka does this all amazingly well and has established itself as a core building block for many of today’s event streaming applications.

In this article, you will learn some of the common use cases and core concepts for Apache Kafka. You’ll also learn how producers and consumers work and how Kafka Streams and Kafka Connect can be used to create powerful data streaming pipelines.

The following diagram describes the core components that connect to Kafka and the data flow between them: 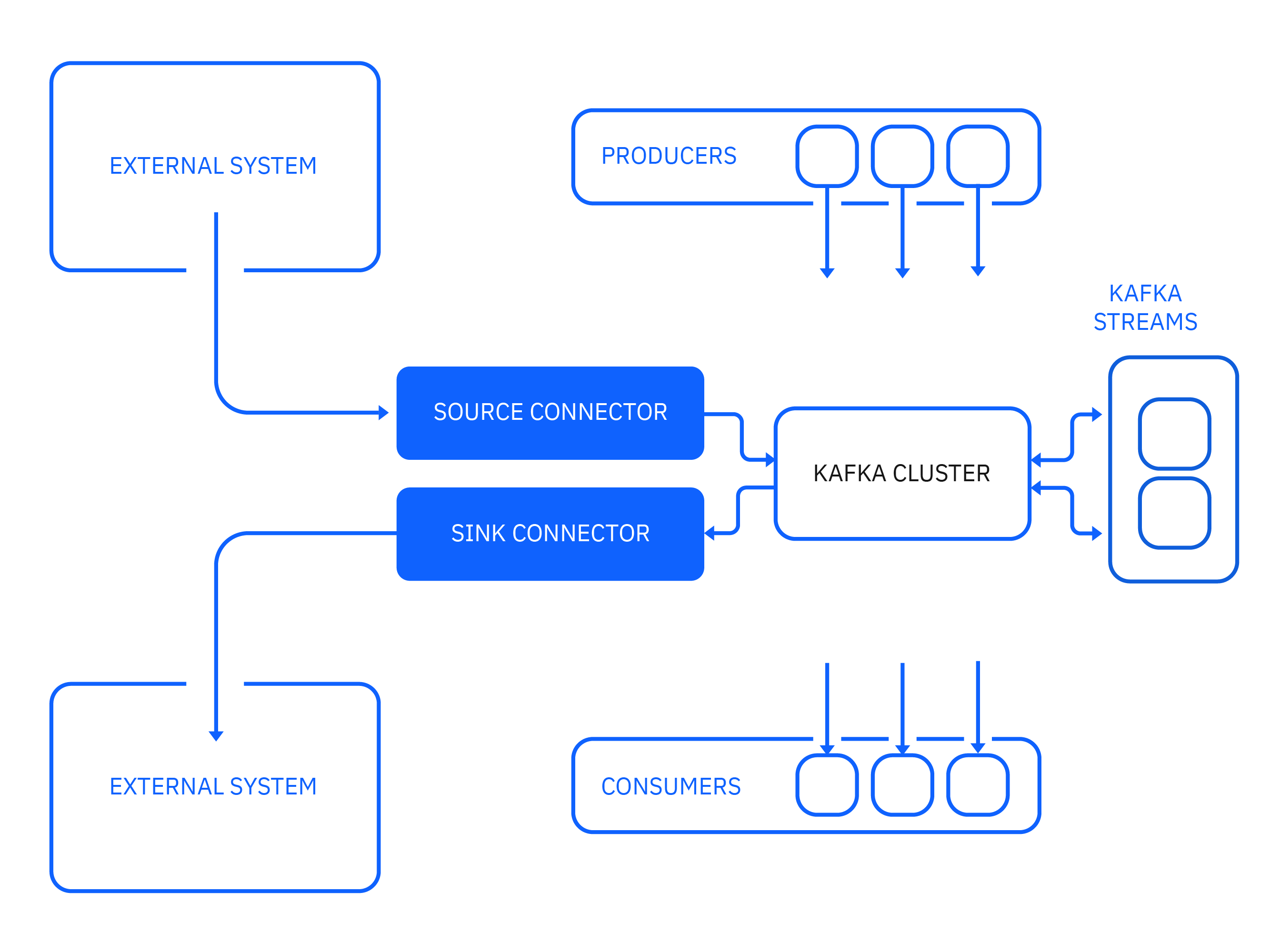 Apache Kafka project is a powerful and scalable technology that is widely adopted for a variety of use cases, including these use cases:

There are many more use cases for Kafka, such as website activity tracking and event sourcing, and the list of use cases is still expanding as Kafka adoption is rapidly growing.

Now that we know the common use cases for Kafka, let’s explore some of the key concepts to understand how it works.

Kafka is run as a cluster on a set of servers, which are called brokers. A cluster has a minimum of 3 brokers as shown in the following example: 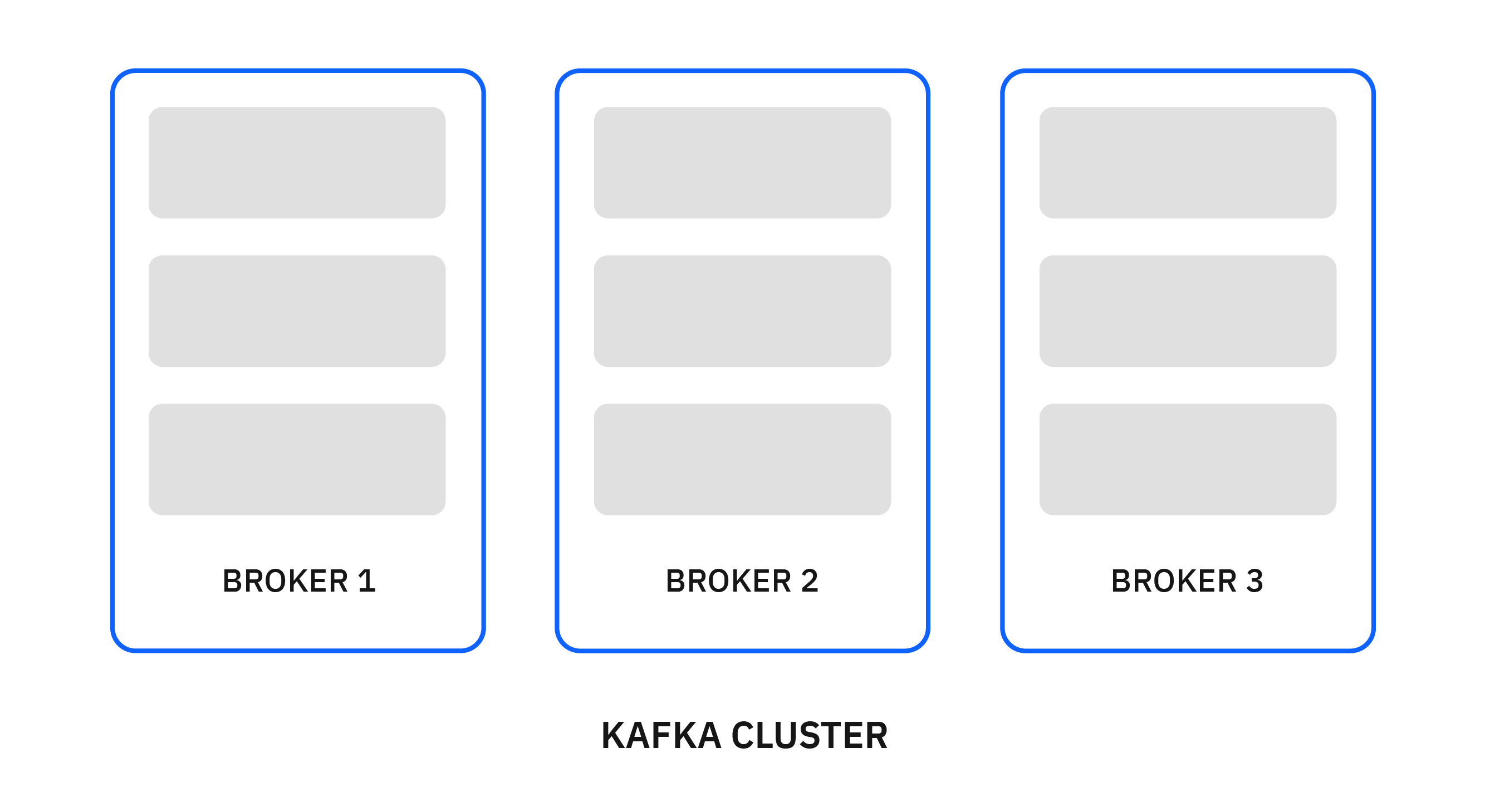 A message is a unit of data in Kafka. Each message is comprised of two parts: key and value. The key is commonly used for data about the message and the value is the body of the message. Kafka uses the terms message and record interchangeably.

Each topic is a named stream of messages. A topic is made up of one or more partitions. The messages on a partition are ordered by a number called the offset. 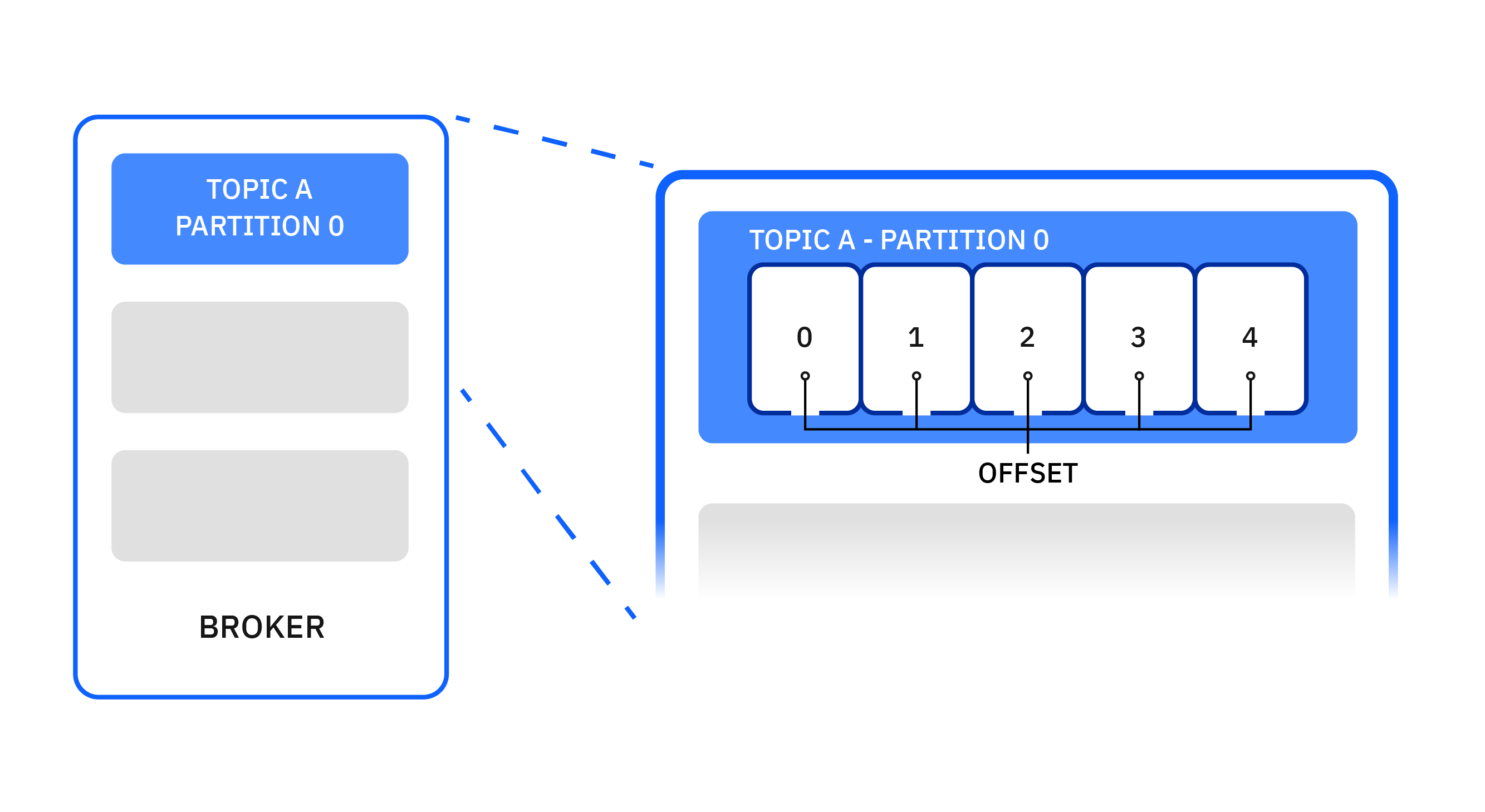 By having multiple partitions distributed across the brokers, the scalability of a topic is increased. If a topic has more than one partition, it allows data to be fed through in parallel to increase throughput by distributing the partitions across the cluster. 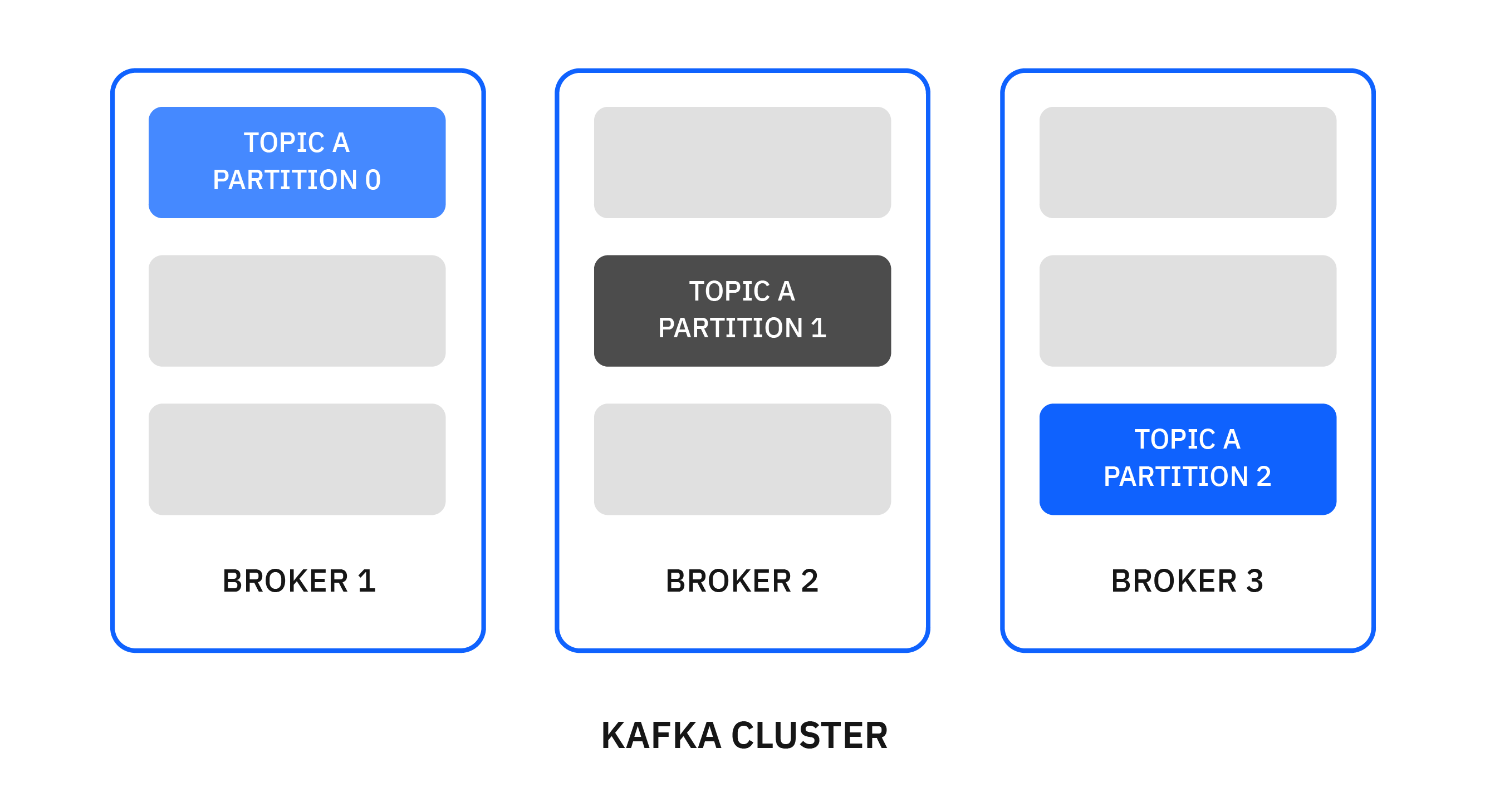 Messages on topics are not kept forever. Kafka will remove old messages. You can specify whether you want to remove messages after a certain amount of time or when the log reaches a certain size.

To improve availability and resiliency, each topic can be replicated onto multiple brokers. For each partition, one of the brokers is the leader, and the other brokers are the followers. 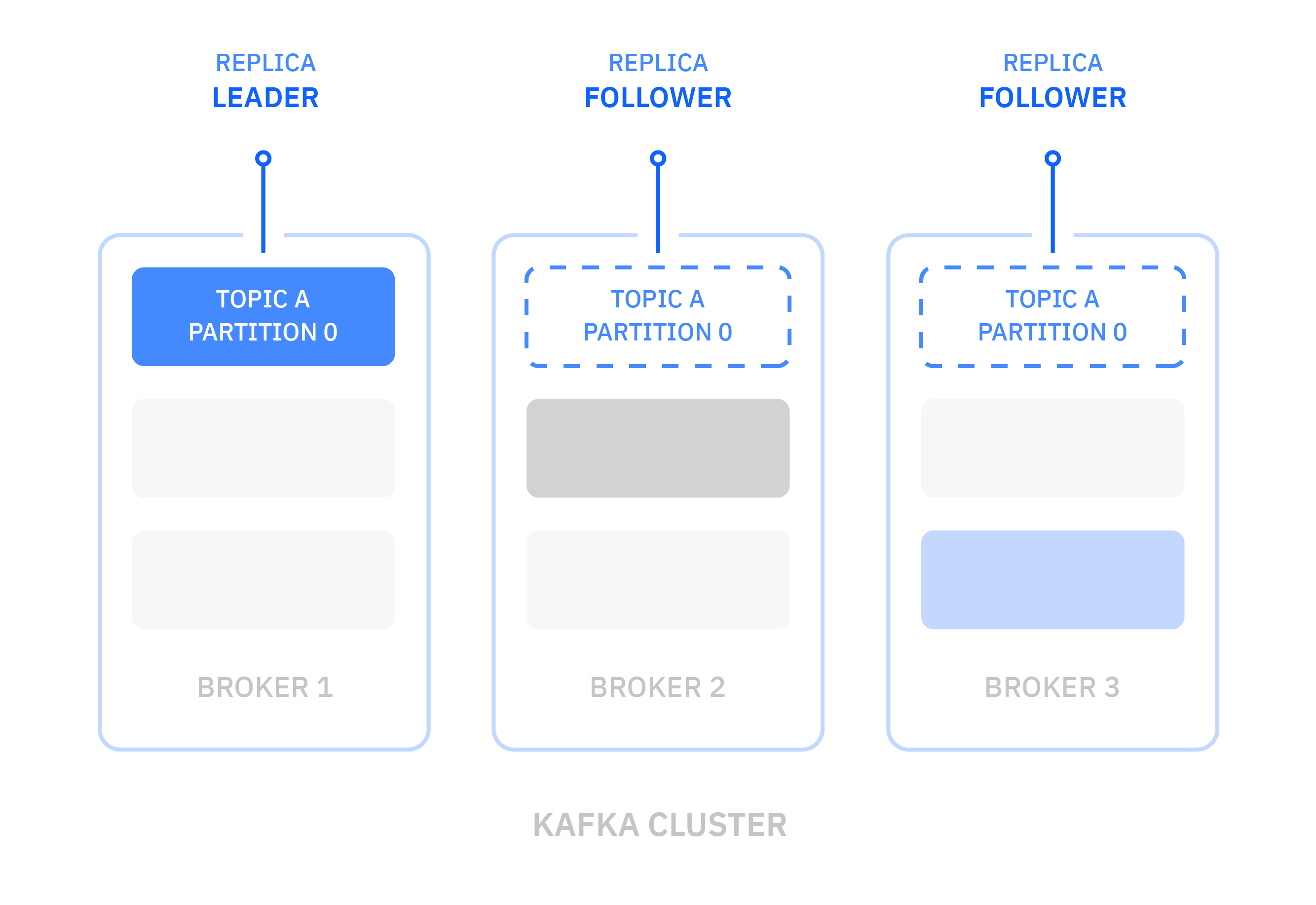 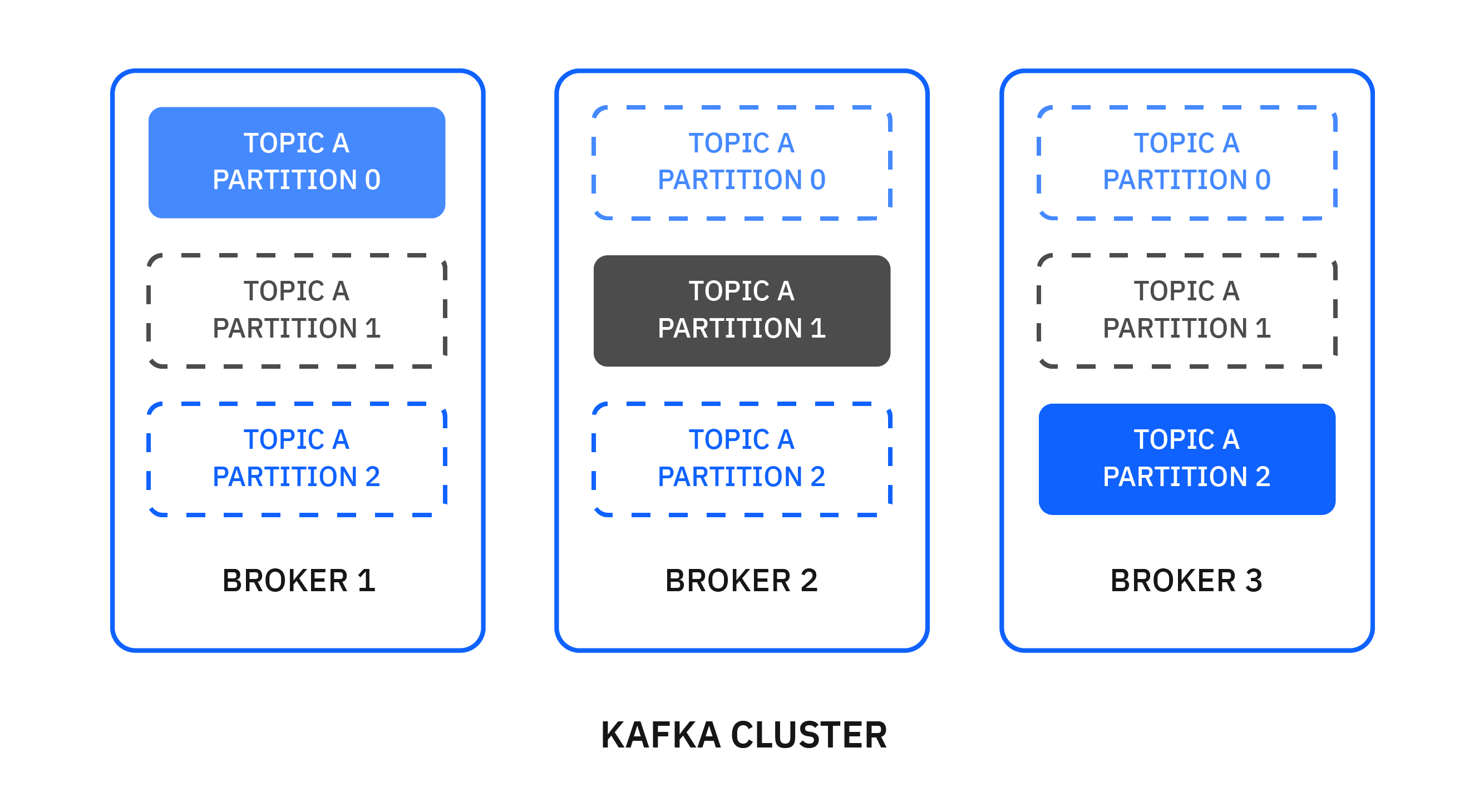 If the leader for a partition fails, one of the followers with an in-sync replica automatically takes over as the partition’s leader. Any follower with an in-sync replica can become the leader without losing any messages. In practice, every server is the leader for some partitions and the follower for others. The process of designating a new leader replica is called a leadership election. The leadership of partitions is dynamic and changes as servers come and go.

In the following example, broker 1 is the leader for partition 1 of topic A. 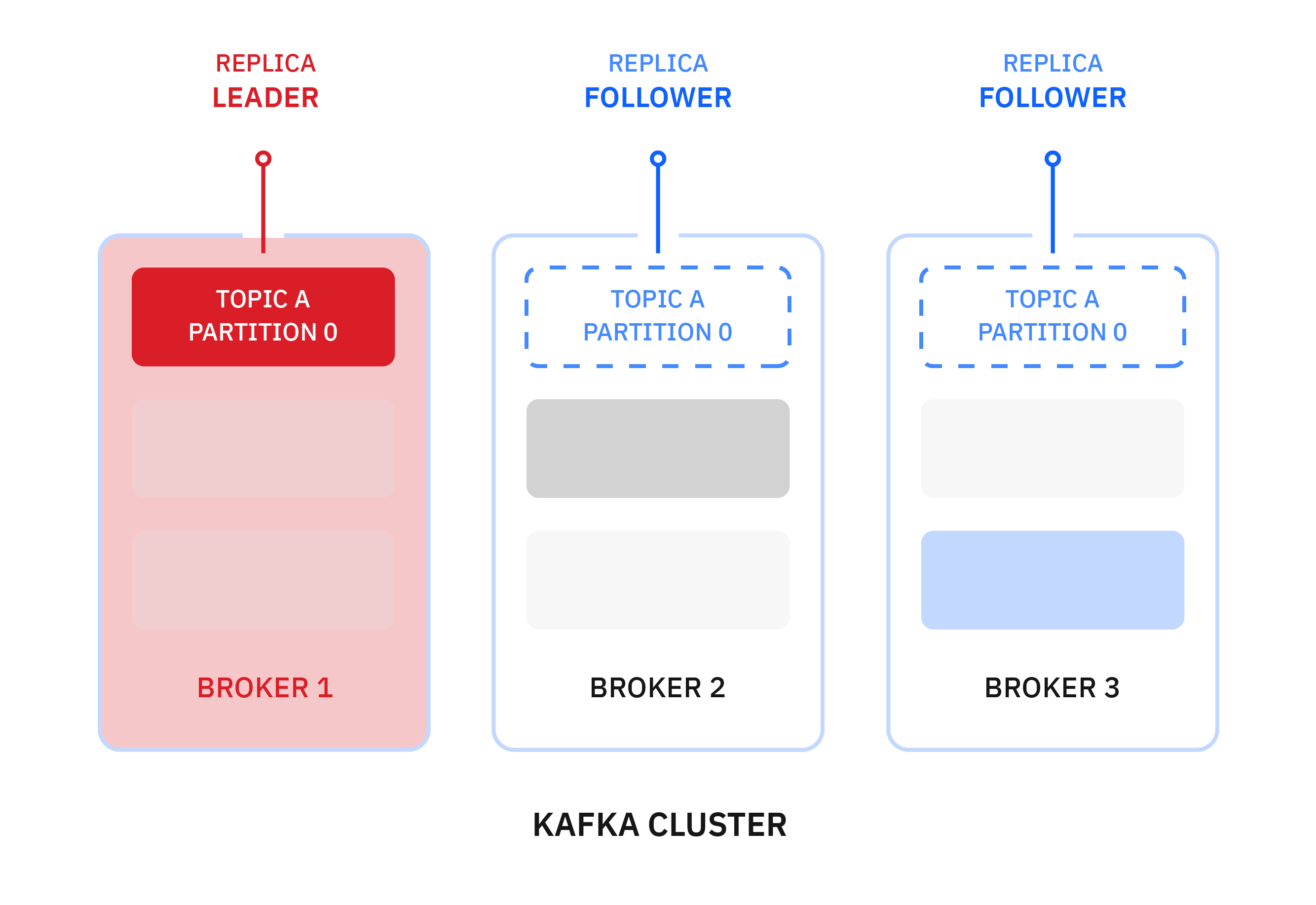 When broker 1 goes offline, broker 2 becomes the leader for the partition automatically. 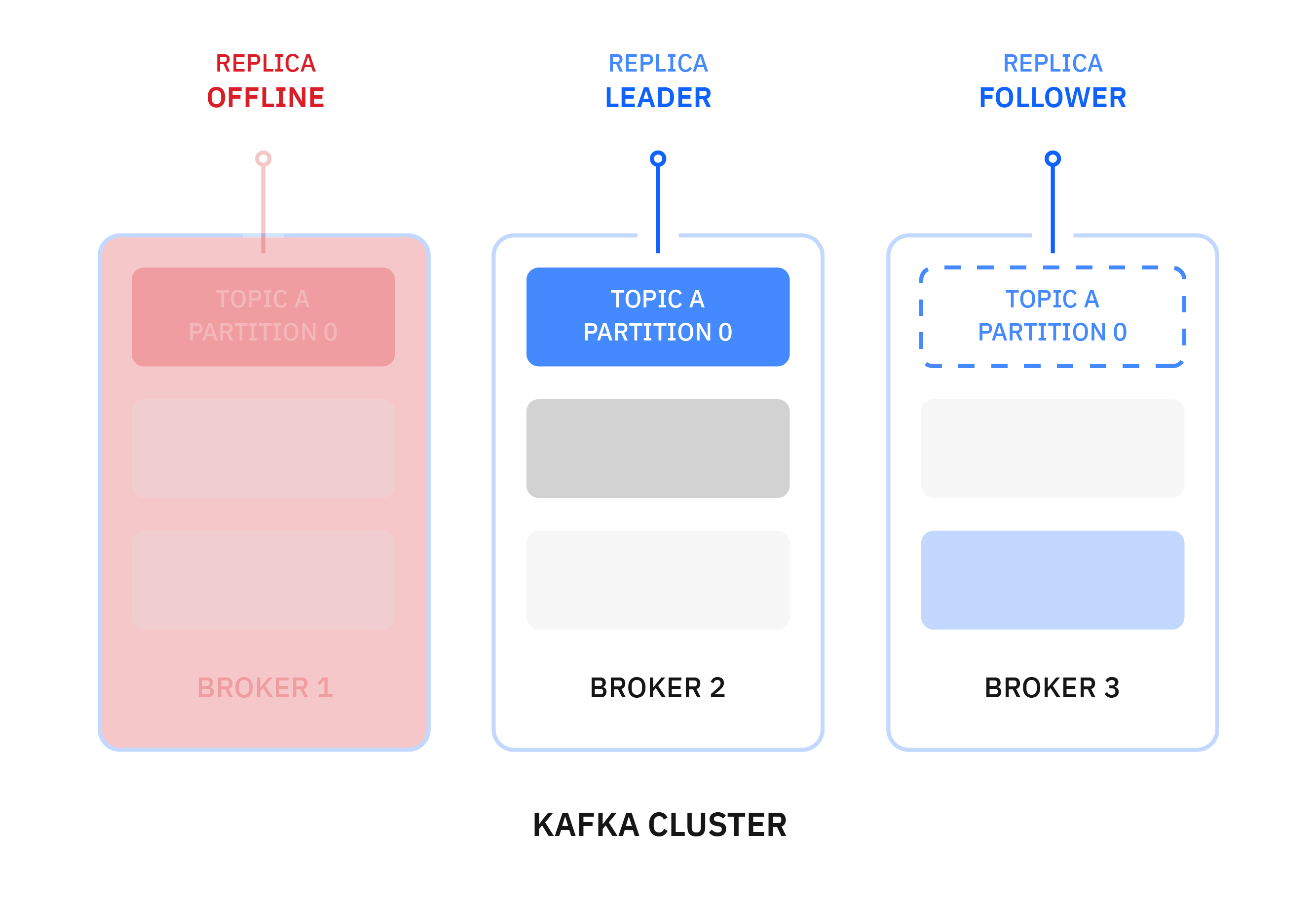 Applications do not need to take specific actions to handle the change in the leadership of a partition. The Kafka client library automatically reconnects to the new leader, although you will see increased latency while the cluster settles.

Let’s now learn about the Kafka clients that allow applications to send, receive, and process data from and to Kafka.

A producer is an application that publishes streams of messages to Kafka topics. A producer can publish to one or more topics and can optionally choose the partition that stores the data. 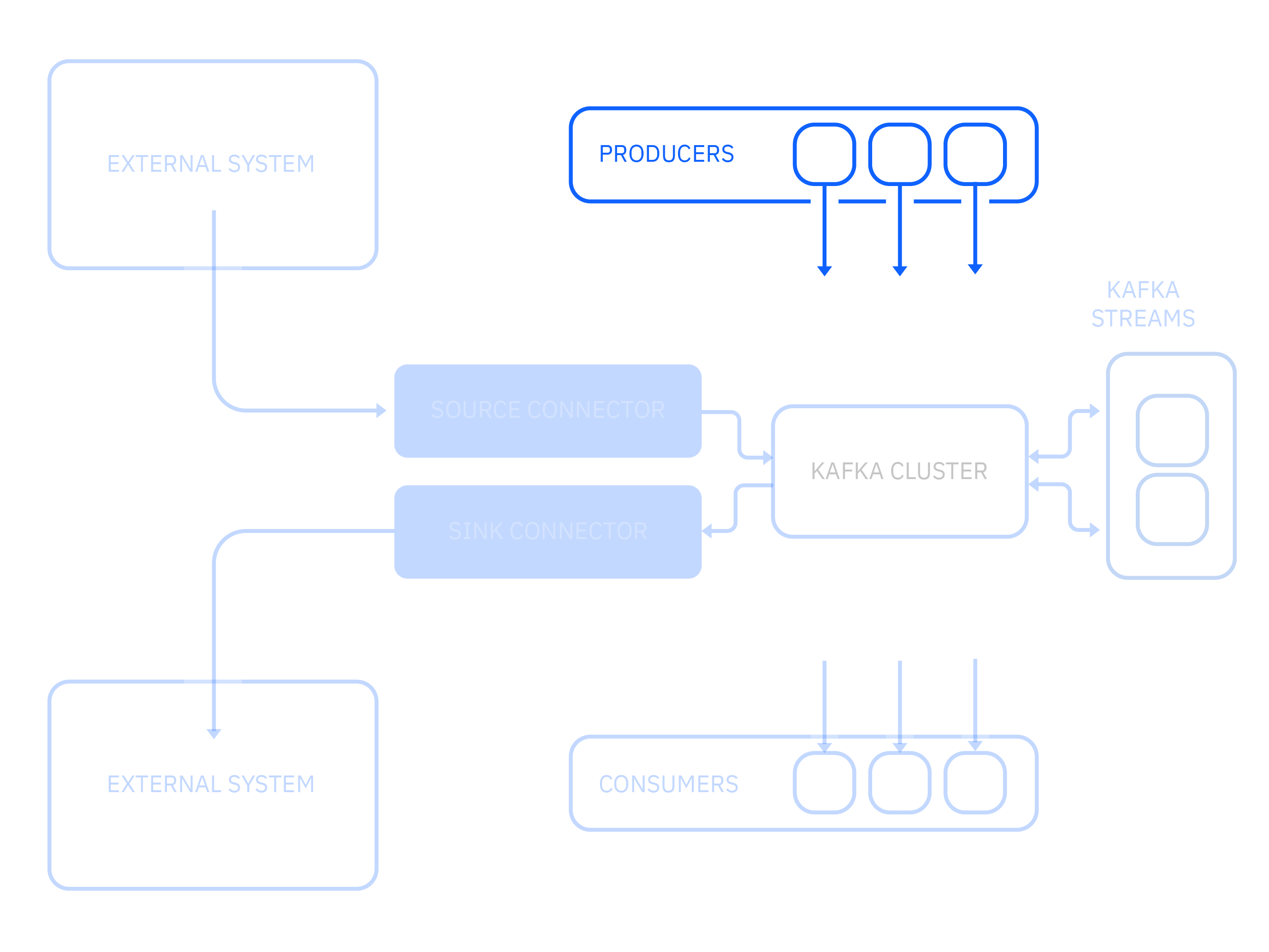 When a producer connects to Kafka, it makes an initial bootstrap connection. This connection can be to any of the brokers in the cluster. The producer requests information about the topic that it wants to publish to so that it knows which broker and partition it needs to connect to.

Then, the producer establishes another connection to the partition leader and can begin to publish messages. These actions happen automatically internally when your producer connects to the Kafka cluster. 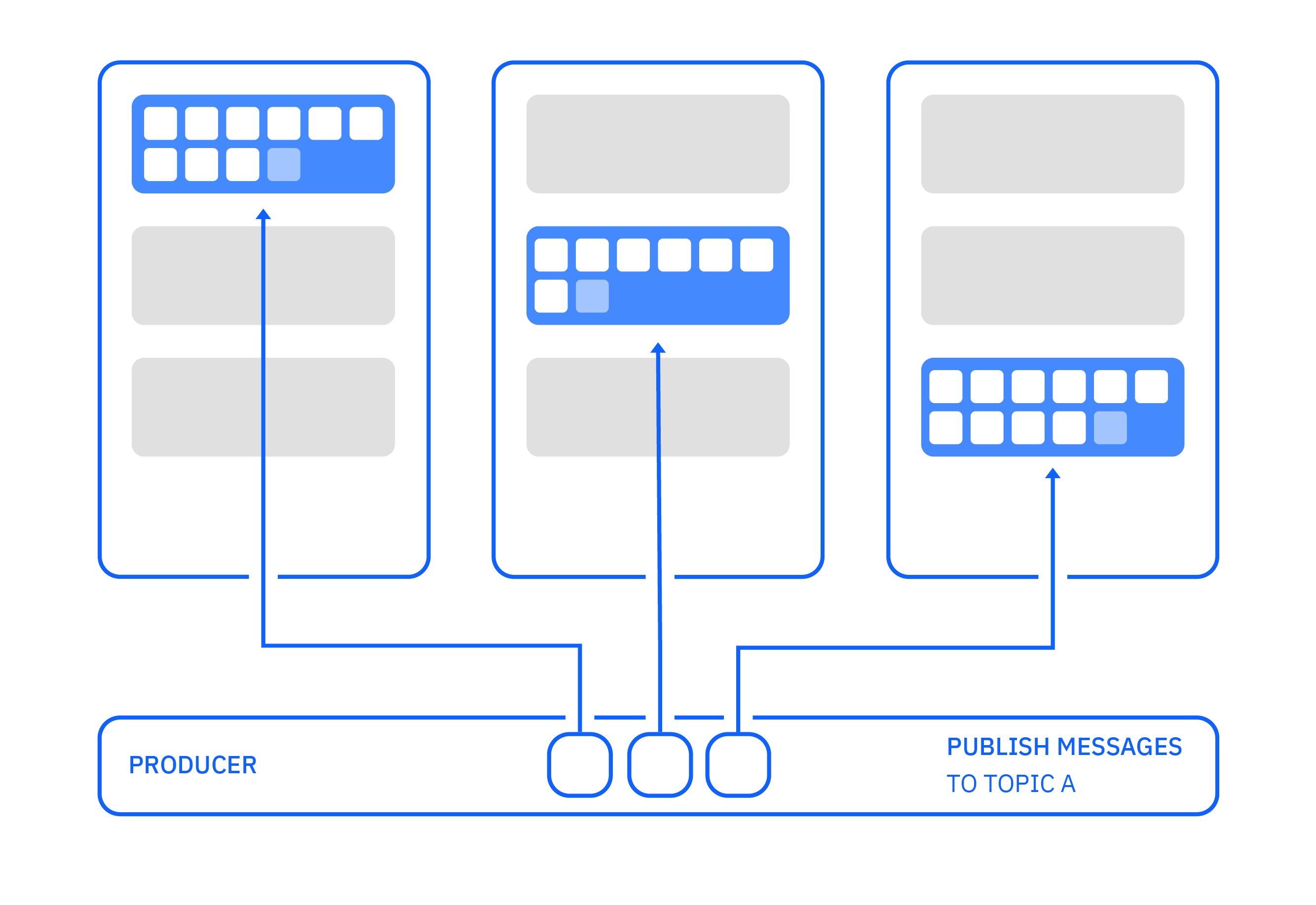 As mentioned earlier, a message is comprised of two parts: key and value. 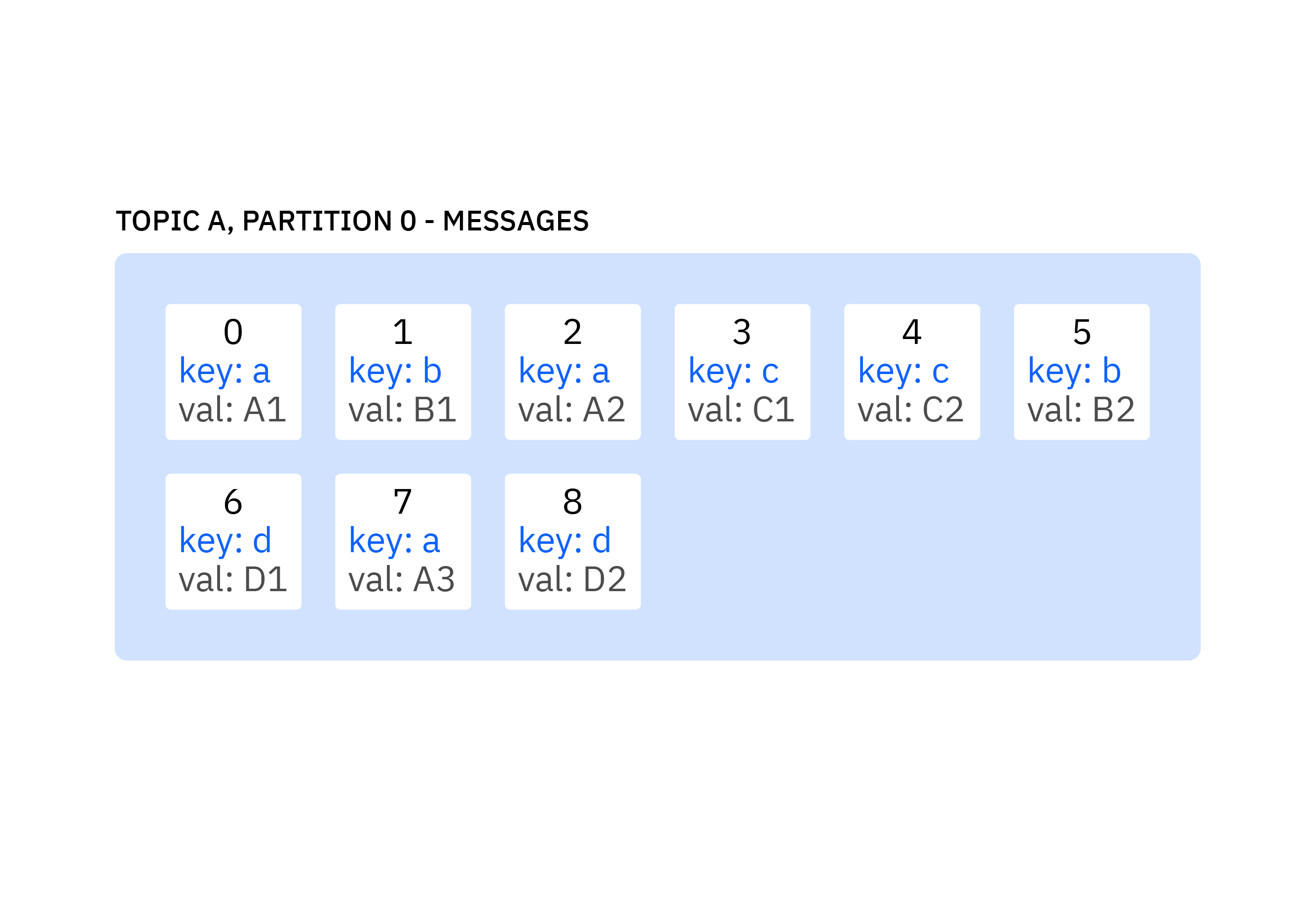 You can also write your own custom partitioner. A custom partitioner can choose any scheme to assign messages to partitions. For example, use just a subset of the information in the key or an application-specific identifier.

Because many tools in the Kafka ecosystem (such as connectors to other systems) use only the value and ignore the key, it’s best to put all of the message data in the value and just use the key for partitioning or log compaction.

Many other messaging systems also have a way of carrying other information along with the messages. Kafka uses message headers for this purpose, more information can be found here.

Kafka generally writes messages in the order that they are sent by the producer. However, there are situations where retries can cause messages to be duplicated or reordered. If you want a sequence of messages to be sent in order, it’s very important to ensure that they are all written to the same partition by giving the same key because this is the only way to guarantee message ordering.

The producer is also able to retry sending messages automatically. It’s often a good idea to enable this retry feature because the alternative is that your application code has to perform any retries itself. The combination of batching in Kafka and automatic retries can have the effect of duplicating messages and reordering them.

When you publish a message, you can choose the level of acknowledgments required using the acks producer configuration. The choice represents a balance between throughput and reliability. A producer sending messages has three levels of acknowledgements as follows:

The delivery semantics are determined by the following settings:

By default, Kafka uses “at least once” semantics. 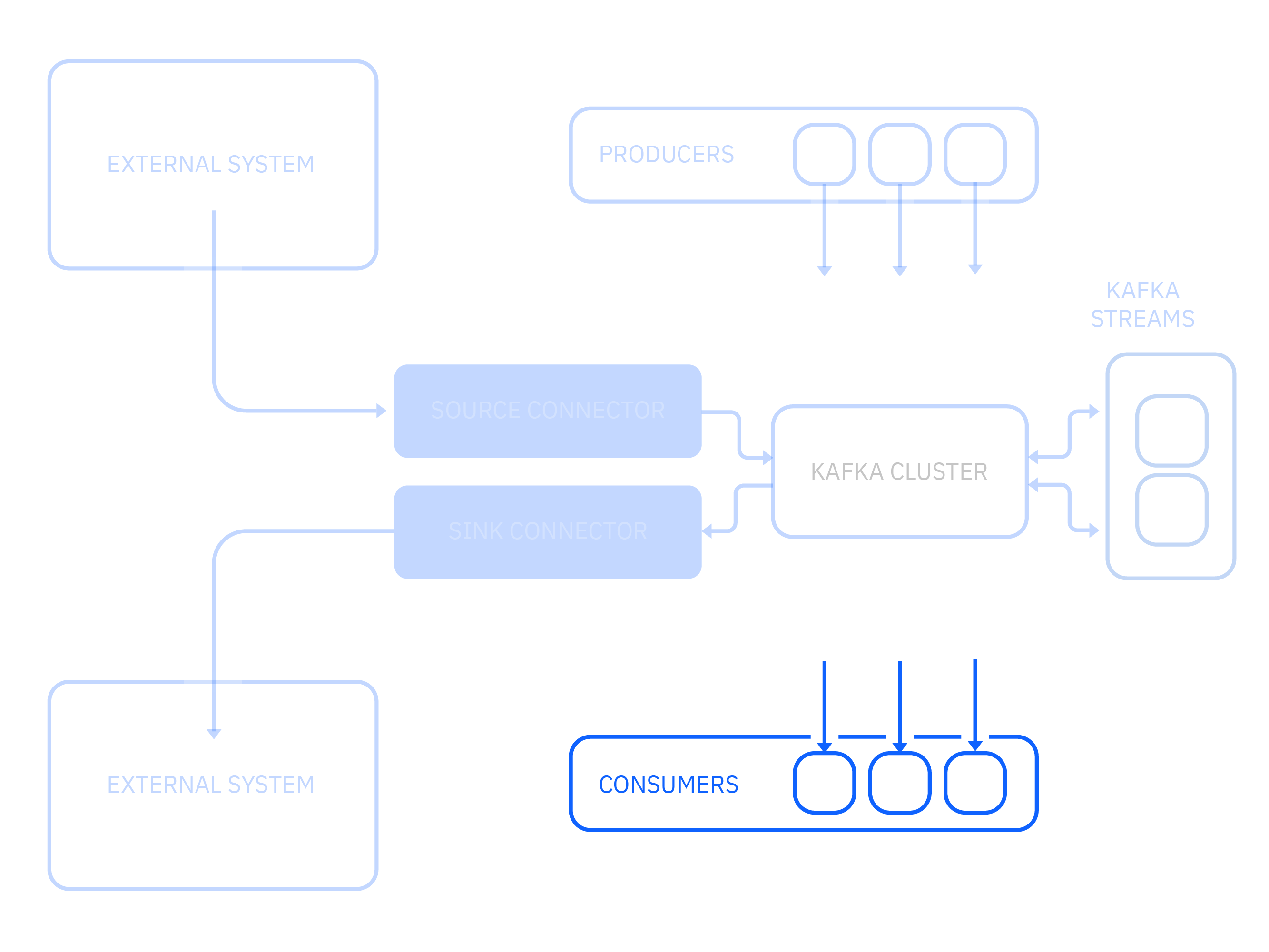 When a consumer connects to Kafka, it makes an initial bootstrap connection. This connection can be to any of the servers in the cluster. The consumer requests information about the topic that it wants to consume from so that it knows which broker and partition it needs to connect to.

Then the consumer establishes another connection to the partition leader and can begin to consume messages. These actions happen automatically internally when your consumer connects to the Kafka cluster. 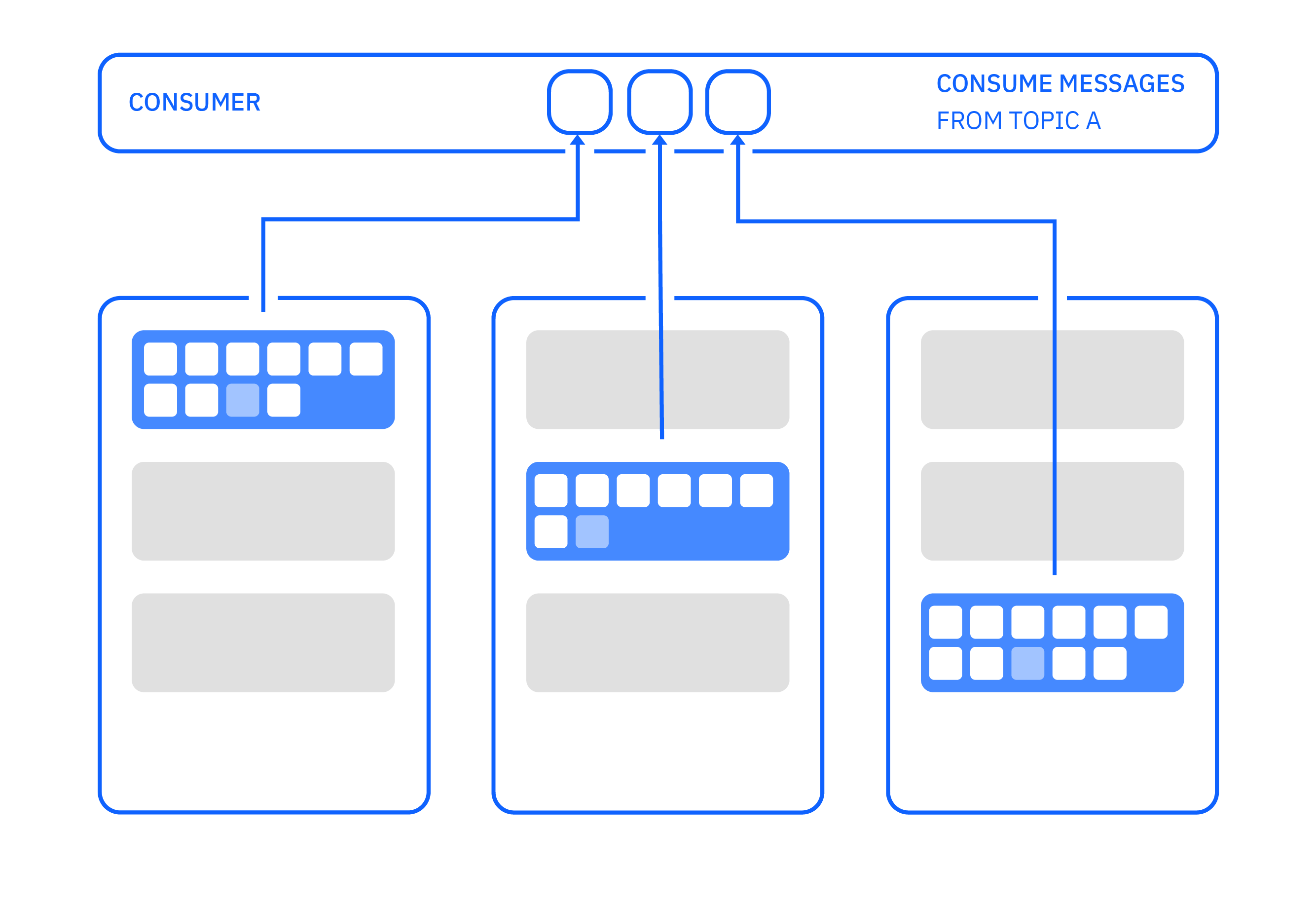 A consumer is normally a long-running application. A consumer requests messages from Kafka by calling Consumer.poll(...) regularly. The consumer calls poll(), receives a batch of messages, processes them promptly, and then calls poll() again.

When a consumer processes a message, the message is not removed from its topic. Instead, consumers can choose from several ways of letting Kafka know which messages have been processed. This process is known as “committing the offset.”

The difference between a consumer’s current position and the newest message on a partition is known as the offset lag. If the lag increases over time, it is a sign that the consumer is not able to keep up. Over the short term, this is not an issue, but eventually the consumer could miss messages if the retention period is exceeded.

A consumer group contains one or more consumers that work together to process the messages. The messages from a single partition are processed by one consumer in each group. 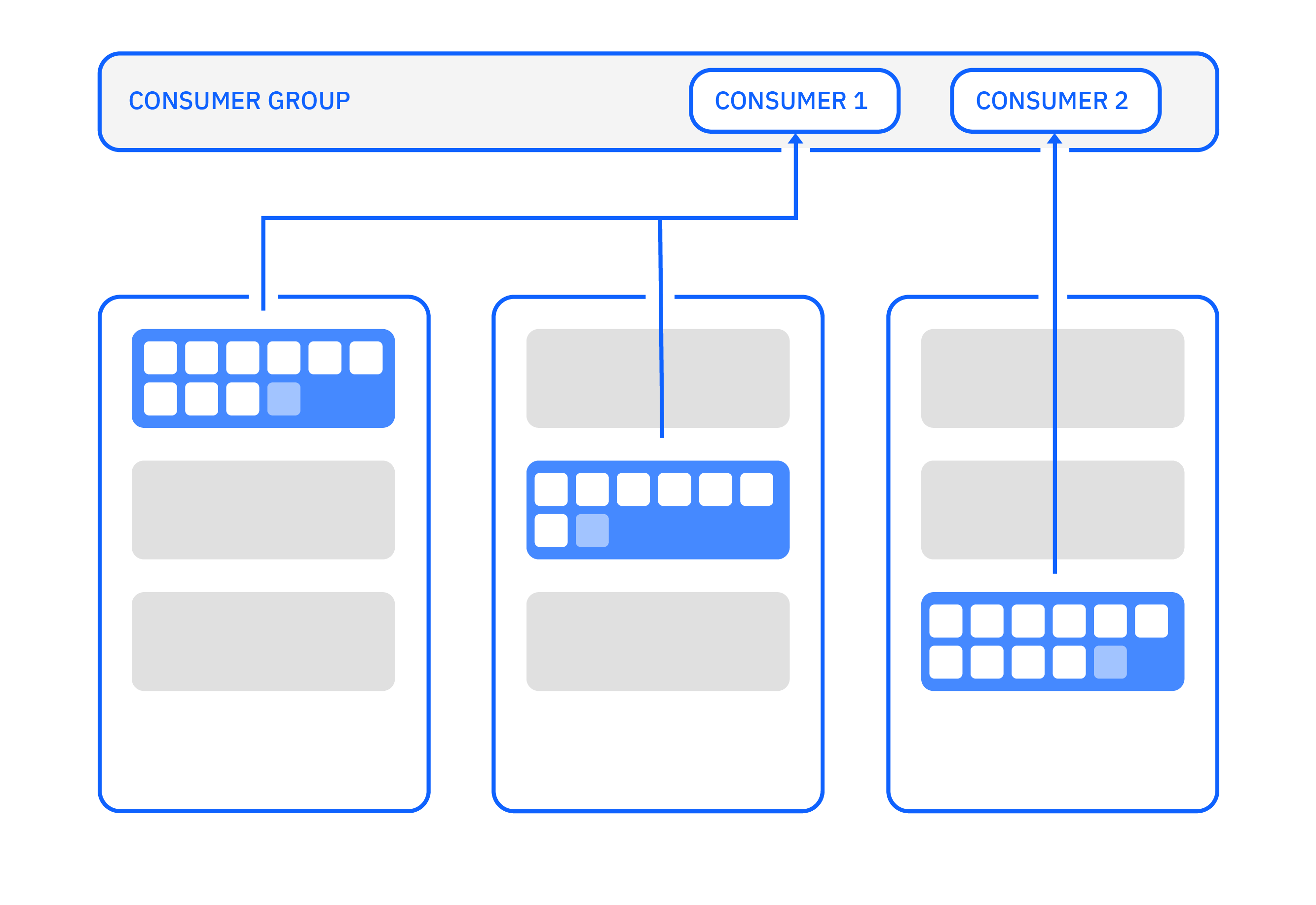 At any time, each partition is assigned to only one consumer in the group. This assignment ensures that the messages on each partition are processed in order. 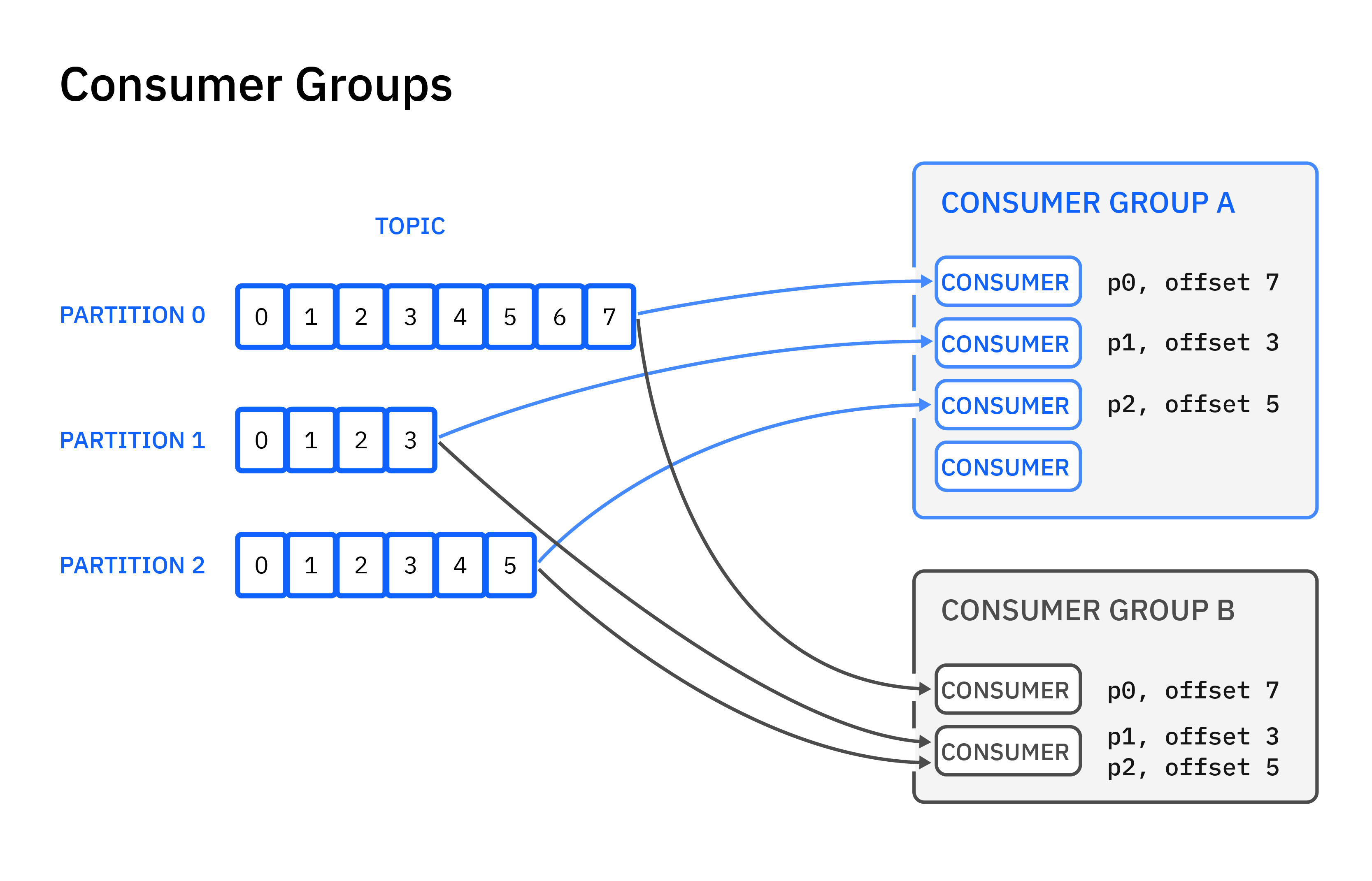 When one of the following changes takes place in a consumer group, the group rebalances by shifting the assignment of partitions to the group members to accommodate the change:

For each consumer group, Kafka remembers the committed offset for each partition being consumed.

If you have a consumer group that has rebalanced, be aware that any consumer that has left the group will have its commits rejected until it rejoins the group. In this case, the consumer needs to rejoin the group, where it might be assigned a different partition to the one it was previously consuming from.

Kafka automatically detects failed consumers so that it can reassign partitions to working consumers. It uses two mechanisms to achieve this: polling and heartbeating.

If the batch of messages returned from Consumer.poll(...)is large or the processing is time-consuming, the delay before calling poll() again can be significant or unpredictable. In some cases, it’s necessary to configure a long maximum polling interval so that consumers do not get removed from their groups just because message processing is taking a while. If this were the only mechanism, it would mean that the time taken to detect a failed consumer would also be long. 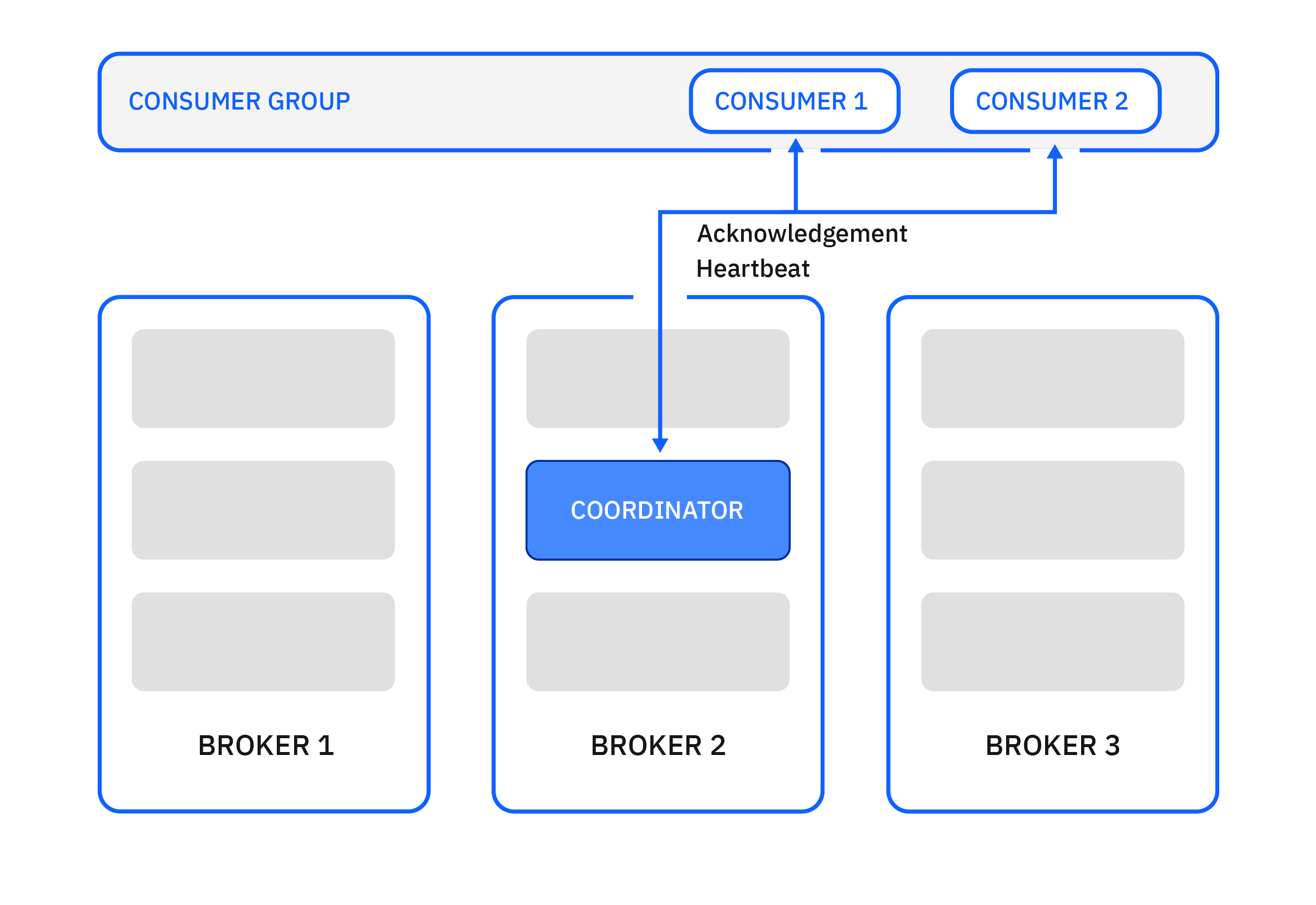 You can configure the maximum polling interval using the max.poll.interval.ms property and the session timeout using the session.timeout.ms property. You will typically not need to use these settings unless it takes more than 5 minutes to process a batch of messages.

Kafka Streams is a stream processing library that is part of the Apache Kafka project. It is an open source Java API that simplifies the building of applications that process and analyze data in Kafka. 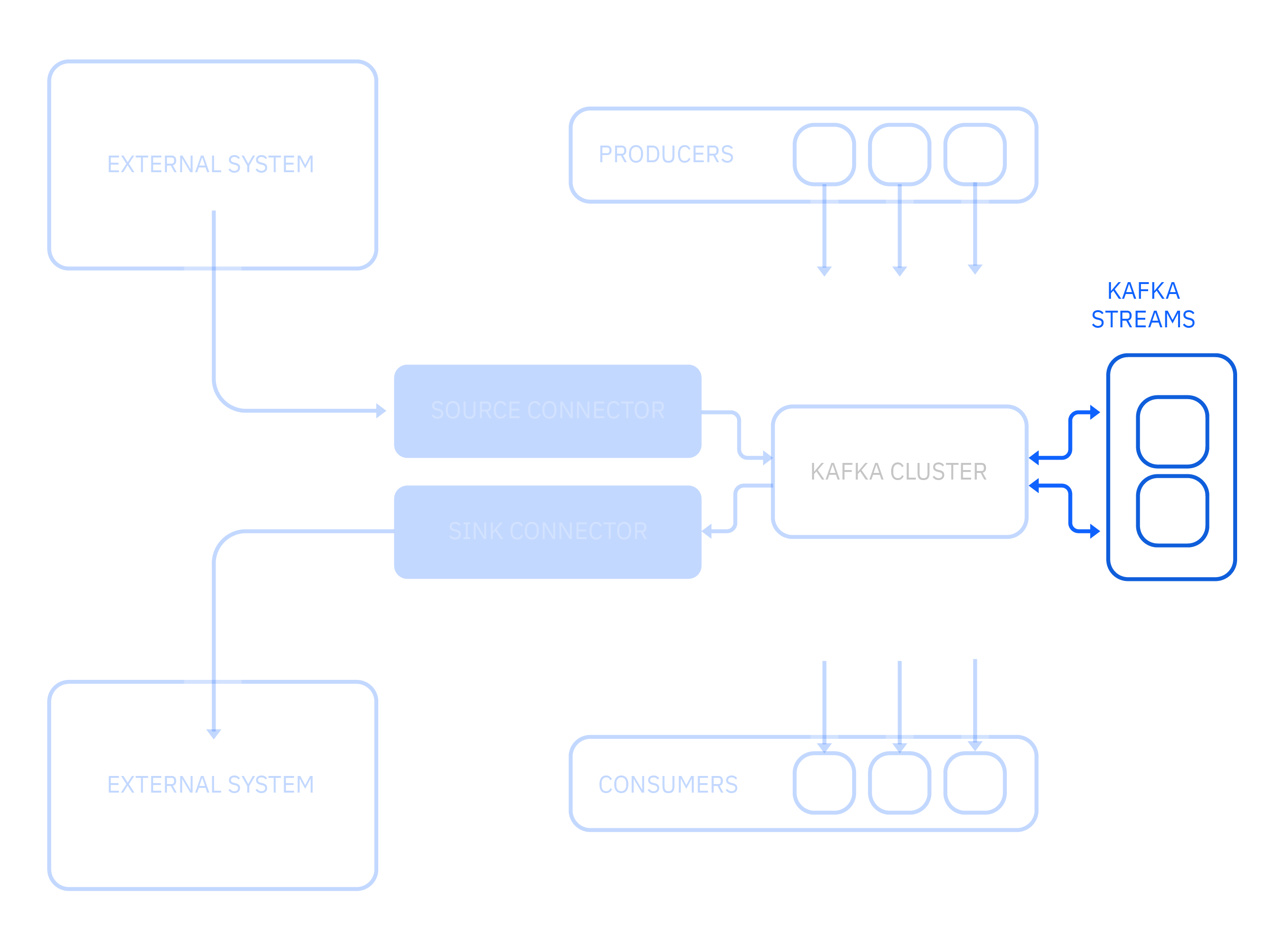 A Kafka Streams app can take input of one or more topics, and can output zero or more topics. In the following example, the Kafka Streams app takes the messages with value of foo, bar, and so on, and keys such as red, orange, and so on. It then filters to find all messages with a key of bingo, and then applies a map to uppercase the values. Then, it pushes the messages onto the output topic.

Kafka Connect is part of the Apache Kafka project and allows connecting external systems to Kafka. 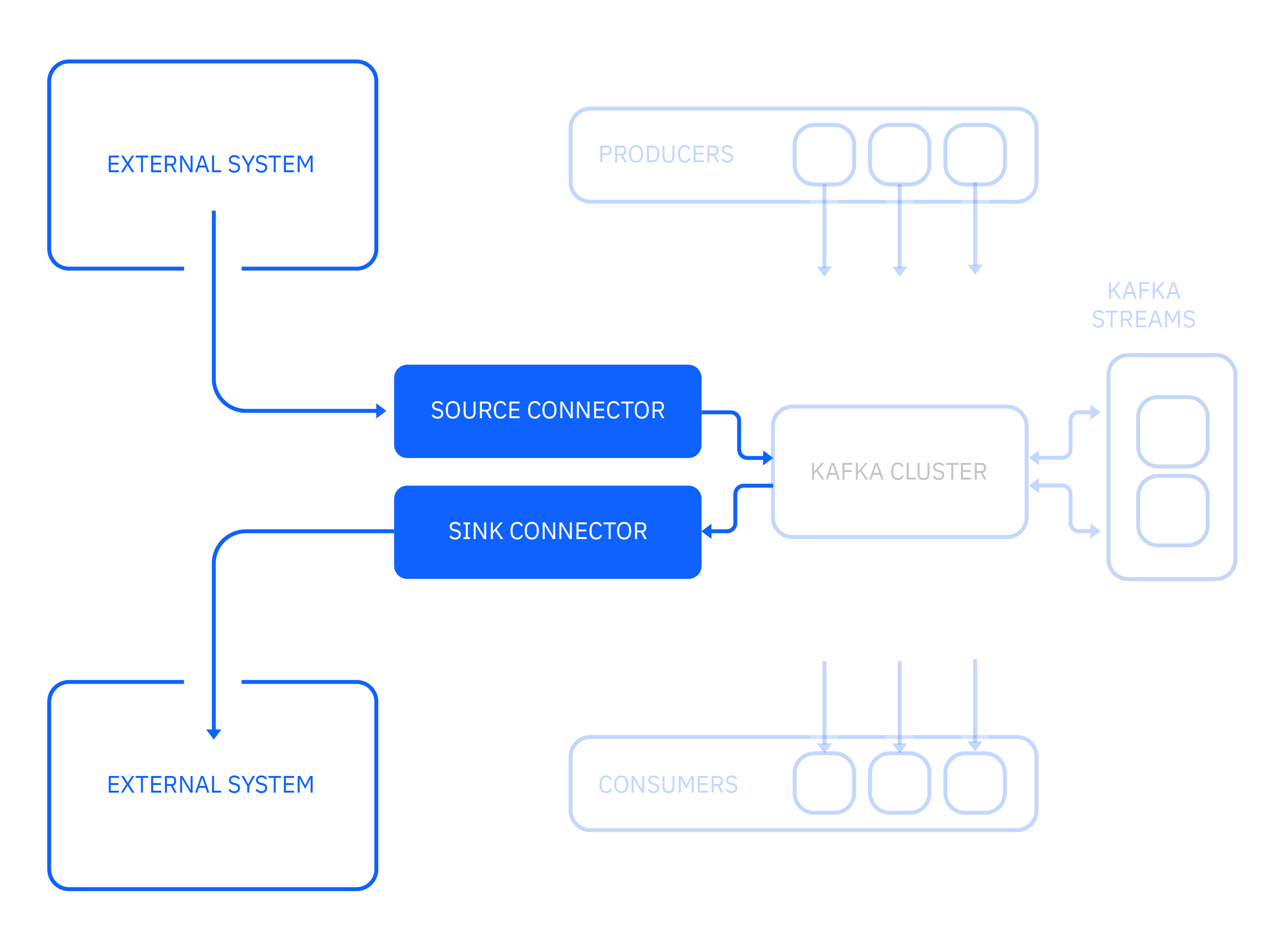 It consists of a runtime that can run connectors to copy data to and from a cluster. Its main characteristics are:

IBM has connectors for MQ and Cloud Object Storage. Many connectors are available and are often open source.

Now that you know some of the common use cases and the fundamental concepts of Kafka, you can dig in a little deeper on these Apache Kafka concepts: