Developers have many different ways to run an Apache Kafka cluster. You can use the open-source distribution of Apache Kafka, the Strimzi project (which is a Cloud Native Computing Foundation sandbox project), or a proprietary version such as Confluent that includes support. Also, you can choose to use a fully managed Kafka cluster like IBM Event Streams on IBM Cloud.

However you choose to run Kafka, monitoring is a fundamental operation when running Kafka or Kafka applications not just to debug problems that have already happened but also to identify abnormal patterns of behavior and prevent issues ahead of time. There is a misconception that if you are using a fully managed service, monitoring Kafka metrics is not necessarily important. This is just not true; even running in a fully managed Kafka cluster, you must ensure that you instrument and maintain your Kafka applications correctly.

Developers have numerous metrics available to them when using Kafka, but the sheer number can be overwhelming, which makes it quite challenging to know where to start and how to properly use them. This article will introduce you to some of the key Kafka client metrics that you should collect and overall monitoring best practices.

Kafka brokers and clients emit metrics that show point-in-time data for various statistics. JMX is the most used mechanism to export these metrics.

You can use tools such as Prometheus to scrape data and Grafana to plot graphs for visualizing the data. Some of these metrics can also be used to warn you about abnormal behaviors and trigger alerts for critical issues.

The following figure is an example monitoring system at a high level: 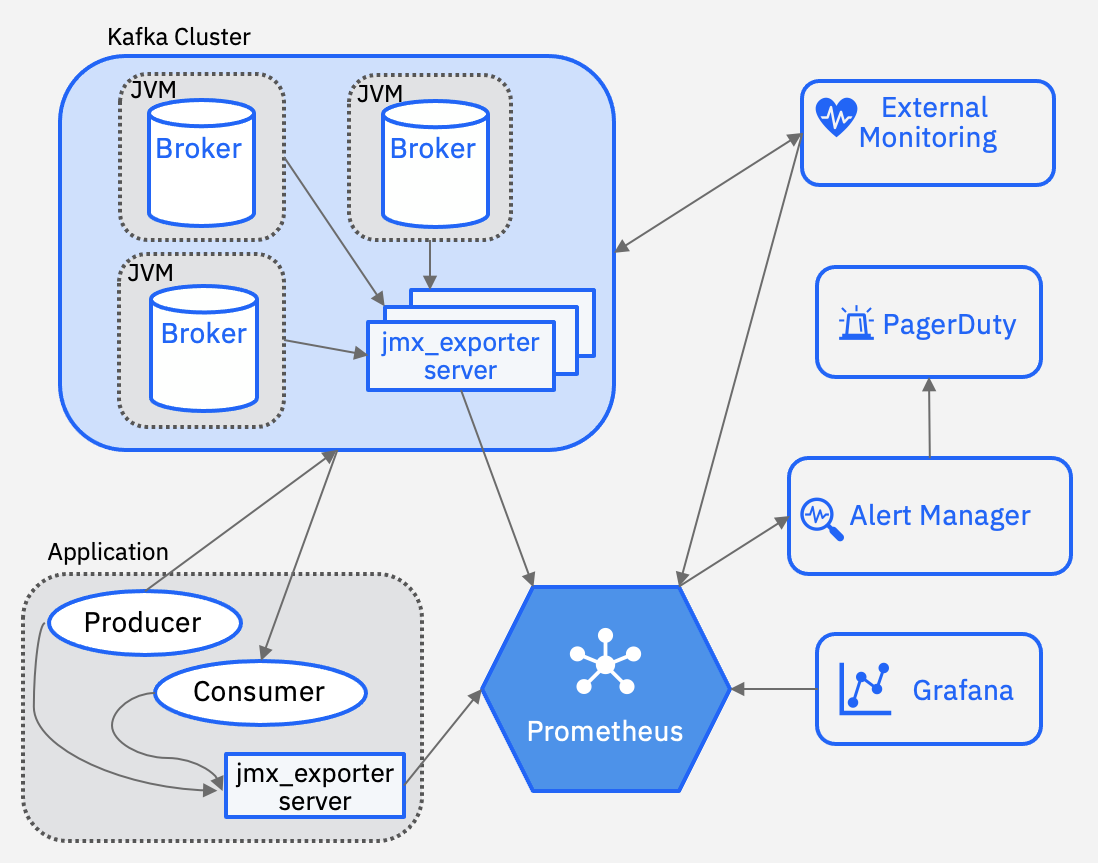 When setting up monitoring, consider these best practices:

You can use this list of client metrics as a starting point, but the metrics that you need to collect might be slightly different depending on your use case.

The following metrics are some of the most common metrics monitored for Kafka client applications which you could use as a set of metrics to start with. However, the set of metrics chosen to be monitored and what they mean can be very different depending on the use case so you will likely want to monitor more metrics than what is listed below. With most client metrics, you would need to monitor them over time and understand the trends in order to identify what’s normal and what’s not normal.

It’s also useful to instrument your application to emit metrics that can help you identify issues that might be causing your event flow to be slow, stuck, or not working. For example, you can monitor the following metrics:

In addition to monitoring your Kafka app with the Kafka metrics I described in this article, you also need to monitor the system metrics, which also affect the performance of your application.

Legend
Previous
Workshop: Build apps that react to events
Next
Persistence in Kafka