Build and deploy a basic operator

Learn how to build a Memcached operator on Red Hat OpenShift

Note: This tutorial can apply to other Kubernetes clusters as well, however the commands may differ slightly.

This tutorial assumes that you have some knowledge of Kubernetes operators concepts but little or no experience developing operators. If you need a refresher, read Intro to Kubernetes Operators.

Important: If you haven’t set up your environment for building Kubernetes operators, see these installation instructions.

It should take you about 1 hour to complete this tutorial. 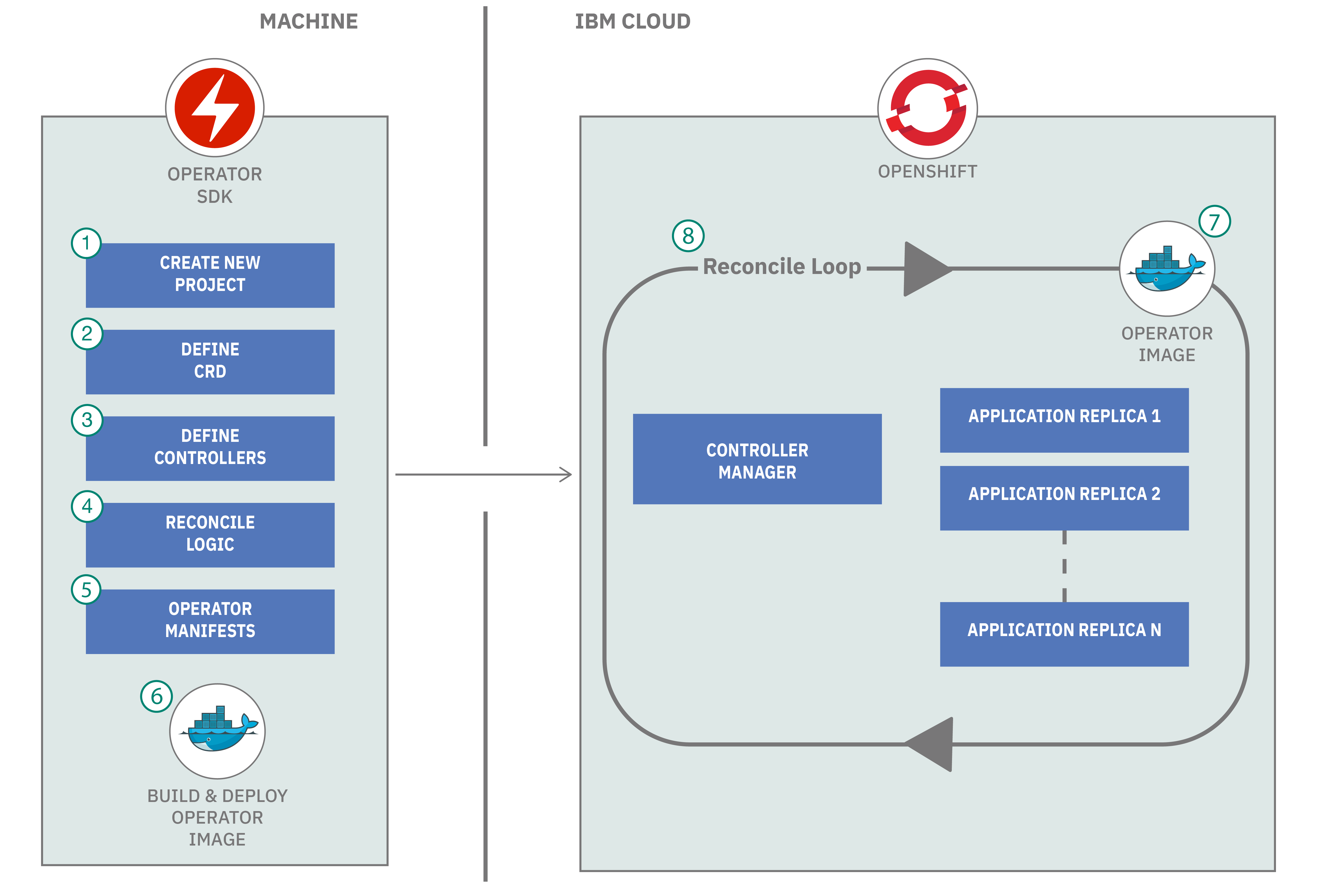 Set up your Go modules

You must set up your Go modules properly to develop and run your operator. The --repo flag sets the name to use for your Go module, which is specified at the top of your go.mod file:

Setting up your Go module enables you to work outside of your GOPATH, as long as the working directory of the project is the same as the name of the module in the top of the go.mod file.

You should now have the basic scaffold for your operator, such as the bin, config, and hack directories, as well as the main.go file that initializes the manager.

Use the --group, --version, and --kind flags to pass in the resource group and version. These 3 flags together form the fully qualified name of a Kubernetes resource type. This name must be unique across a cluster.

Once you deploy this operator, you can use kubectl api-resources to see the name cache.example.com as the api-group, and Memcached as the Kind. You can try this command later after you deploy the operator.

If you get an error running the create api command, you most likely need to install the modules manually.

Here is an example error:

You will have to install the modules manually by running the following commands:

Defining an API is one of the two main parts of the operator pattern. Defining your API creates your custom resource definition (CRD) and is done in the api/v1alpha1/memcached_types.go file.

First, you need to understand the struct that defines your schema. Note that it implements the Object interface, which means it is a Kubernetes object. Also, it has the Spec and Status fields.

What is the Spec?

The MemcachedSpec struct, referenced as the Spec, defines the desired state of the resource. A good way to think about Spec is that any inputs (values tweaked by the user) to your controller go in the Spec section. The controller code references the Spec section to determine how many replicas to deploy.

What is the Status?

The MemcachedStatus struct and the MemcachedSpec struct each has its own fields to describe the observed state and the desired state, respectively.

Now that you’ve modified the file api/v1alpha1/memcached_types.go, it should look like the file in the artifacts directory:

Above type Memcached struct, there are two lines of code starting with +kubebuilder — note that they are actually commented out. They are important because they provide additional information to the controller-tools. For example, this line:

tells the object generator that this type represents a Kind. The generator then implements the runtime.Object interface for you, which all Kinds must implement.

adds the status subresource in the custom resource definition. If you run make manifests, it generates YAML under config/crds/<kind_types.yaml. It also adds a subresources section like so:

The next section shows you how to get and update the status subresource in the controller code.

The key thing to know here is that each of these markers, starting with // +kubebuilder, generate utility code (such as role-based access control) and Kubernetes YAML. When you run make generate and make manifests, your KubeBuilder Markers are read in order to create RBAC roles, CRDs, and code. Read more about KubeBuilder markers.

Note: If you want to learn more in depth about the controller logic, please see our accompanying article, Deep dive into Memcached Operator Code.

Now that the API is updated, the next step is to implement the controller logic in controllers/memcached_controller.go.

Copy the code from the artifacts/memcached_controller.go file, and replace your current controller code.

Once this is complete, your controller should look like the following:

Now you are ready to compile, build the image of your operator, and push the image to an image repository. You can use the image registry of your choice, but this tutorial uses Docker Hub. If you plan on deploying to an OpenShift cluster, log in to your cluster now.

The manager.yaml file defines a deployment manifest that’s used to deploy the operator. This manifest includes a security context that tells Kubernetes to run the pods as a specific user (uid=65532). OpenShift already manages the users that are employed to run pods, which is behavior the manifest should not override. So you should remove that from the manifest.

To do this, modify the config/manager/manager.yaml file to remove the following line:

This enables OpenShift to run its default security constraint. After you remove the runAsUser line and save the file, your file should look like the following (it is the same as the one in the artifacts directory):

The generated code from the operator-sdk creates a Makefile. This Makefile allows you to use the make command to compile your go operator code.

Don’t worry about KubeBuilder Markers for now — we cover them in an upcoming article.

To compile the code, run the following command in the terminal from your project root:

Now you need to update your config to tell your operator to run in your own project namespace. Do this by issuing the following kustomize commands:

<username> is your Docker Hub (or Quay.io) username, and <version> is the version of the operator image you will deploy. Note that each time you make a change to your operator code, it is good practice to increment the version. NAMESPACE is the oc project name where you plan to deploy your operator. For us, this is memcache-demo-project.

For example, our export statements would look like the following:

Build and push your image

Note: You will need to have an account for an image repository like Docker Hub to be able to push your operator image. Use Docker login to log in.

Step 6: Deploy the operator to your OpenShift cluster

Next, let’s create the custom resource.

Verify that resources are running

To learn more about exactly what the code in Step 4 does, read the Deep dive into Memcached Operator Code tutorial, which explains the controller logic in more depth.

The Makefile part of the generated project has a target called undeploy, which deletes all the resources associated with your project. It can be run as follows: